If you're thinking about making the switch, you may be wondering what the running costs are of electric and hybrid vehicles.

How much does it cost to run an Electric or Hybrid Car?

Whether you’re eyeing up the Audi e-tron range or Volkswagen electric cars with both style and power, you may be wondering what the running costs are of electric and hybrid vehicles. Here at Swansway Group, we offer a wide range of zero and low emissions vehicles and are here to break down the costs for you.

There are are few key things to consider when running an Electric or Hybrid Car: How to keep your electric vehicle at it's best

Looking after your EV Though EVs do command a higher price tag from the offset, the costs of running them are much lower than those associated with a petrol or diesel car. DirectLine’s research found that the average annual cost for running an electric car is 21% cheaper than keeping a petrol or diesel car going over a year, working out at around £107 cheaper annually.

EV owners have access to free parking spaces around the country, as well as free charging stations in many car parks and for those travelling in London, EVs are exempt from the daily congestion charge.

One of the bonuses of owning an electric vehicle is the tax breaks. Fully electric cars releasing zero emissions are currently exempt from tax meaning they’re not eligible for Vehicle Excise Duty payments. Other vehicles are taxed depending on how much carbon dioxide they emit. Hybrids bought after 1 April 2017 also tend to face lower charges than those bought in other years. Fully electric cars are exempt from road tax and hybrid vehicles owners pay £140 annually.

As electric vehicles have fewer parts to maintain they generally cost less to keep in tip-top condition. They also don’t need oil filters and have no cambelts that can be fairly expensive for a vehicle owner to replace. That said, they’ll still require an MOT once a year after they turn three.

Insurance costs vary depending on the make and model of your vehicle. Parts can be more expensive to repair if something does go wrong which can potentially lead to high premiums. But as electric vehicles become more mainstream, prices should balance out. Always compare and contrast policies to find the best deal.

Firstly, it’s good to know that electric vehicles are considered much cheaper to run than diesel or petrol vehicles, and it’s fuelling your car with electricity where you’ll really save money. In fact, it’s thought electric vehicles can travel up to three times the distance of their fuel-burning alternatives for the same money according to new ‘miles per pound’ figures.

As with petrol, prices do vary between chargers, but taking an average cost you’ll be looking at around £6-7 for 100 miles of additional charge. The expense of recharging depends on where and when you charge your vehicle.

As over 90% of electric vehicle charging takes place at home, let’s focus on home electricity tariffs. More companies are offering EV-focused plans, offering lower prices to charge during lower times of demand, such as during the night. If electricity costs around 14 pence per kilowatt-hour (on average, rates vary), then a 60kWh battery will cost around £8.40 to fully recharge. Many cars travel well over 200 miles on a single charge making the overall cost of ‘fuel’ extremely low, 4p per mile, versus 12p per mile of traditional petrol cars.

How much would it cost to charge an Electric Vehicle? 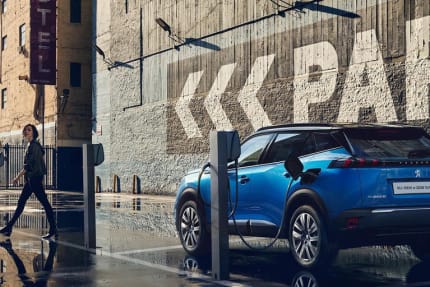 Which electric cars are on the Motability scheme?

Explore the selection of EV vehicles now available on the Motability scheme! Is a Hybrid a good choice for a company car?

Motoring journalist John Swift looks at why this is and how a Hybrid Company Car could benefit your car tax bill. Electric Cars with the Longest Ranges

With some cars promising over 335 miles of range, we take a look at some of the best on the market.

Can't find the answer to your question?

Our expert teams are on hand to help with any questions you may have!