The California is a flexible camper van with an upmarket cabin that makes travelling, relaxing and sleeping as enjoyable and simple as possible. Crammed with features, the California ensures that life on the road is never dull.

Volkswagen’s iconic California camper has gone through many changes over the years, but the move to T6.1 has brought some of the largest edits to date. It’s more technologically advanced than ever before, while upgrades to its styling ensure that it remains a classy option.

Of course, its go-anywhere capability and camper status needs to be retained, which is why Volkswagen has packed the new California 6.1 with features that warranted a five-star rating in the prestigious Motorhome and Campervan Design Awards Buyers Guide for 2021, published by The Caravan and Motorhome Club.

Let’s take a look at what it’s got to offer. 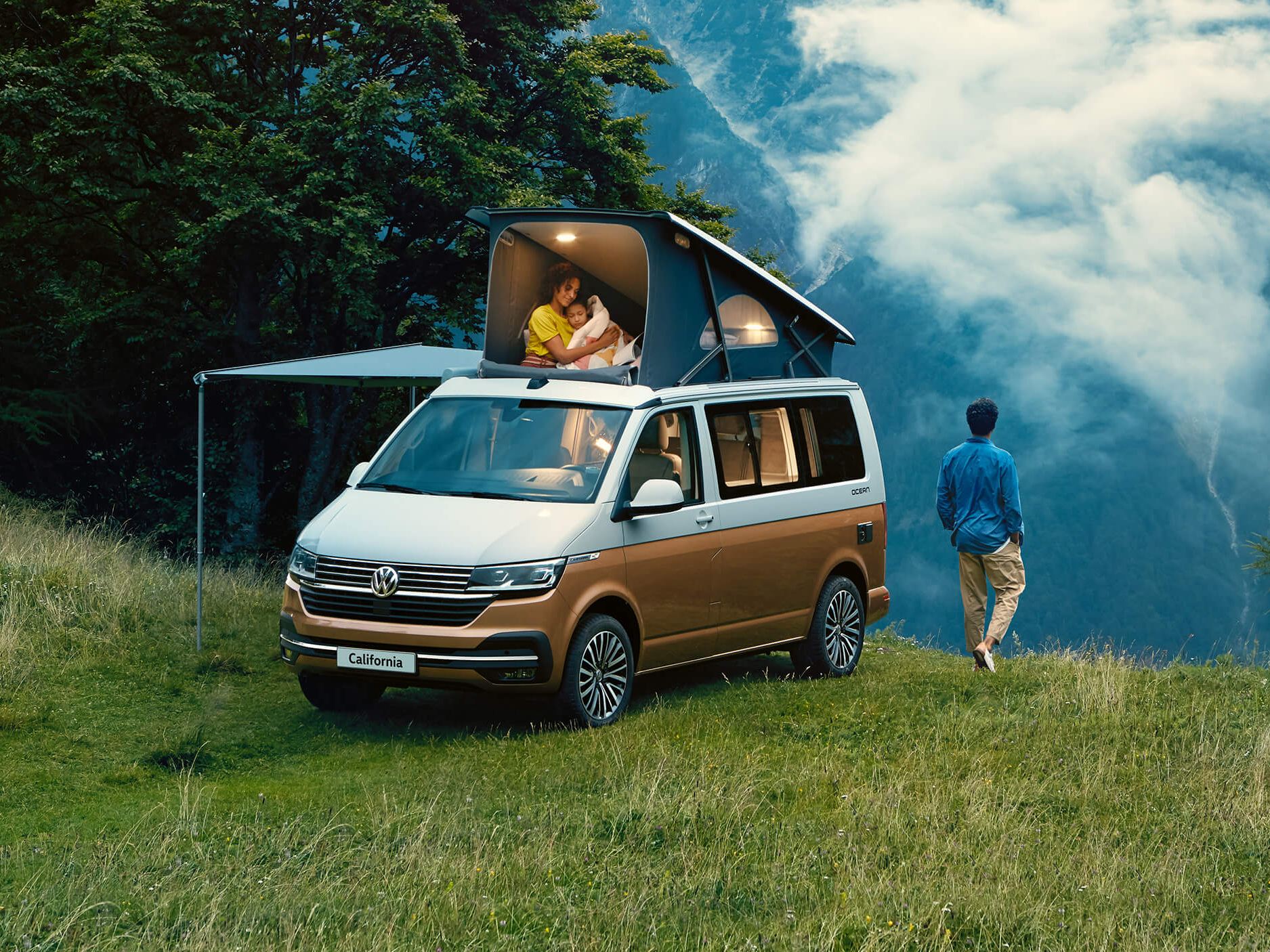 The interior of the California is where you’ll be staying, so Volkswagen has fitted it with all of the creature comforts you could want. There’s a pop-up roof which increases interior space and also provides an additional sleeping area, while a bench seat provides somewhere to relax after a hard day on the road.

There’s also a full kitchen suite with hob and sink, while top-spec Ocean models also pack an auxiliary heater to keep your van at just the right temperature.

The California has evolved over the years and these days it’s a large, smartly-styled interpretation of what a camper van should be. The latest model is available in particularly attractive split-tone shades, too, with a brighter colour on the bottom half contrasting the shade on the top.

The new California also benefits from LED headlights which not only look good but perform really well too.

There’s just one engine available - a turbocharged 2.0-litre diesel - but can be specified with either 148bhp or 201bhp. The latter is only available on top-spec Ocean models, but the rest of the range does with the lesser-powered engine. You can also opt for all-wheel-drive, too.

Both are linked up to a 70-litre fuel tank which should mean you’ll see up to 500 miles from a full tank - or more than enough range for touring, in other words.

As well as all of the features that make the California a comfortable place to be, it’s also packing some high-tech touches too. There’s a large central infotainment that includes navigation and media functions while a digital cockpit display is also available on certain models.

You also have a clever panel placed above the front occupants which gives you control of many auxiliary functions, including the operation of the pop-up roof. 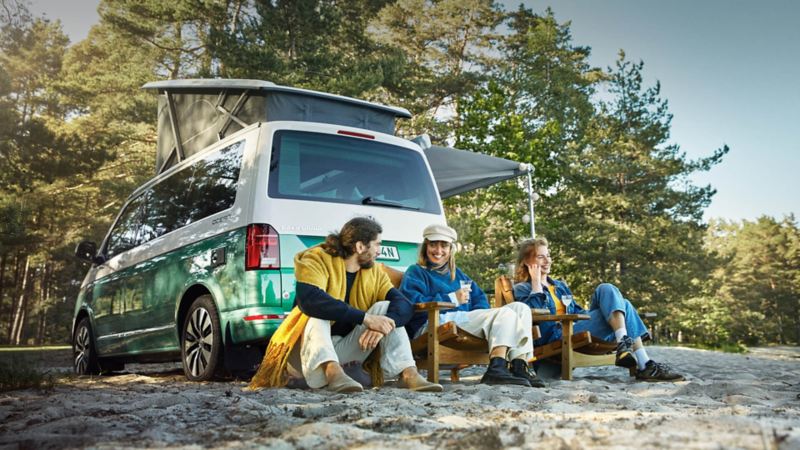 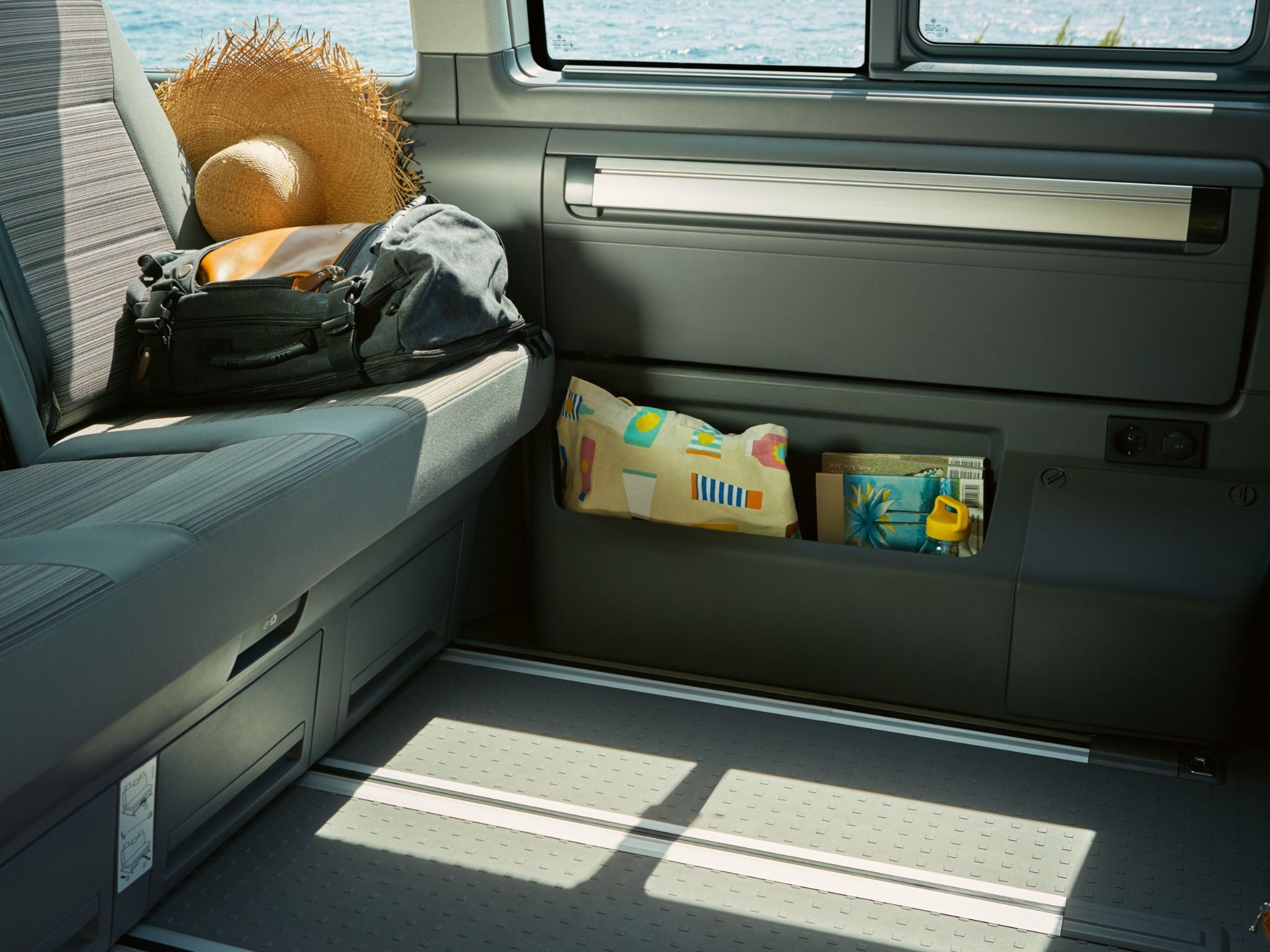 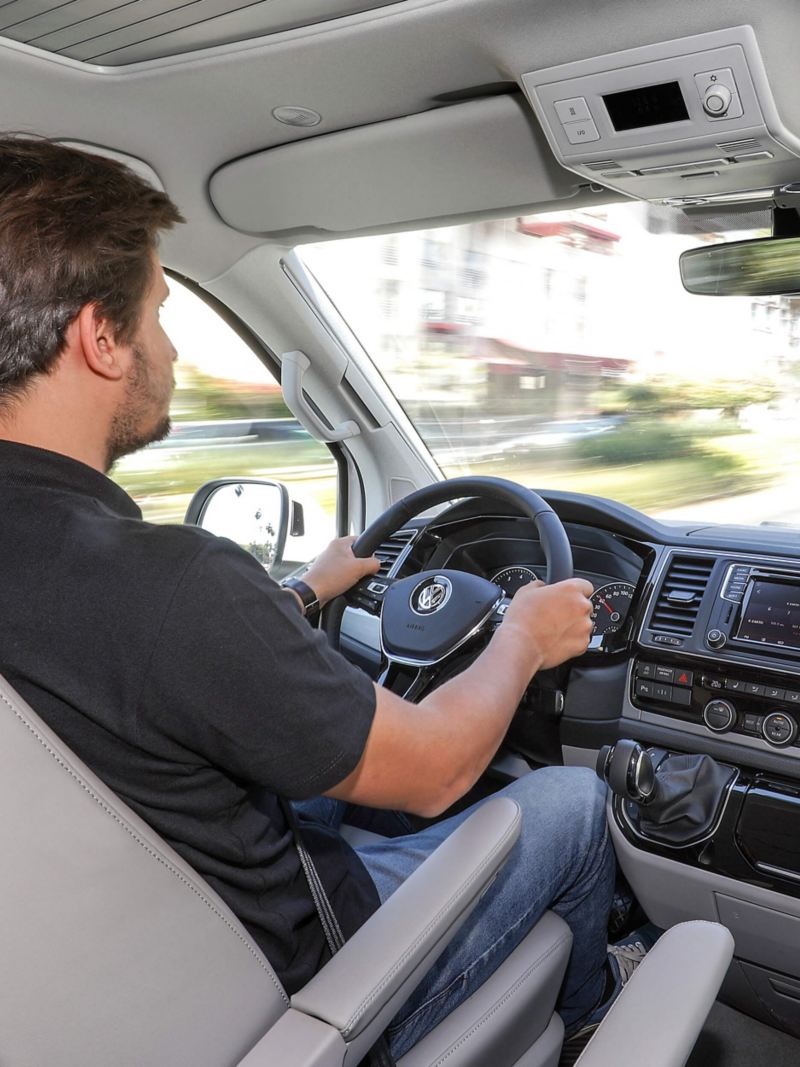 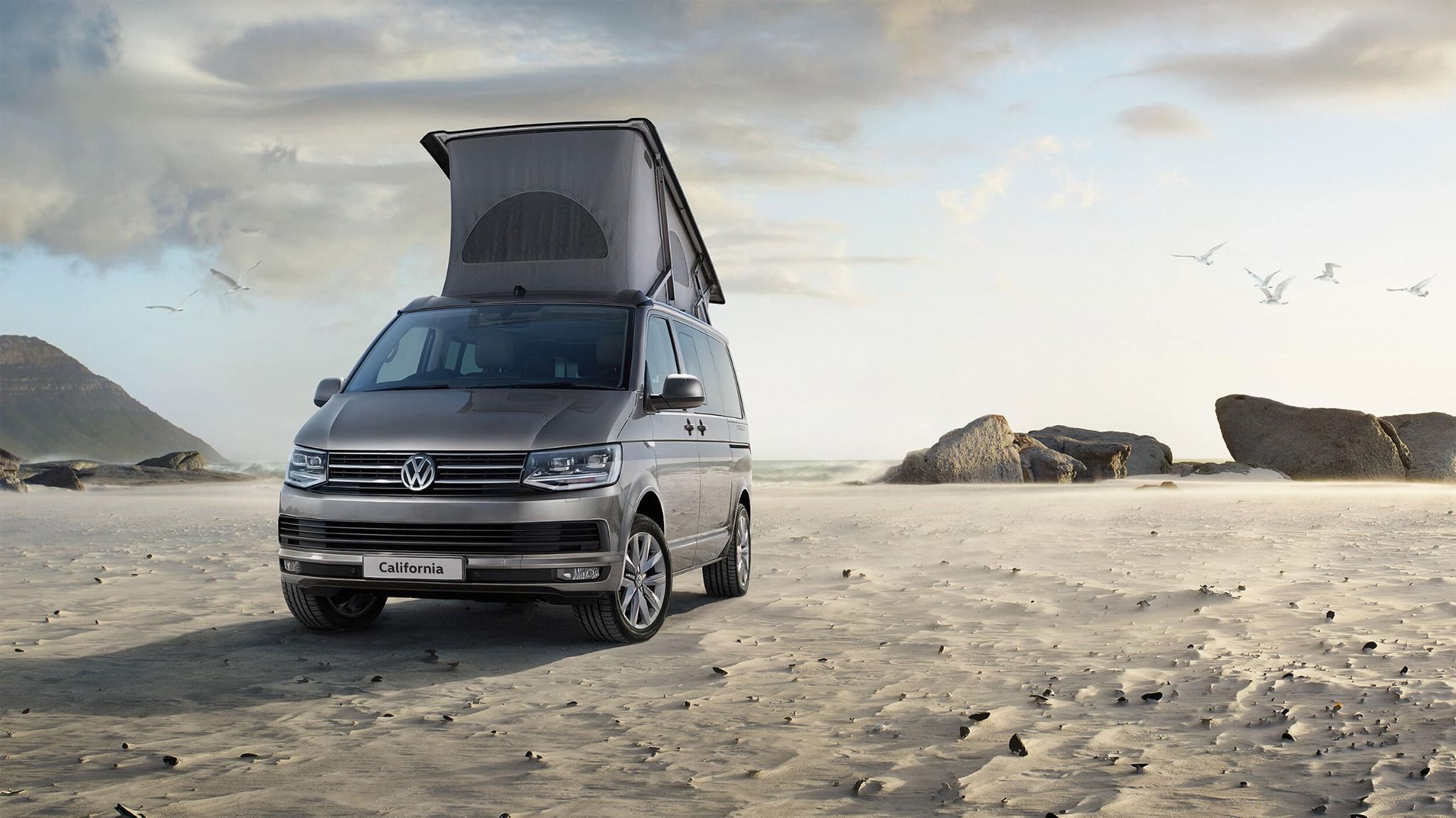 What trim levels are on the VW California?

Is a VW Campervan worth it?

There are plenty of reasons to buy a campervan including family holidays and spontaneous adventures away but is a VW California right for you and worth the investment? If you pick a VW Cali you’ll find that its:

What’s the Difference between the California Ocean and California Beach?

Ocean is the higher trim of the two available with the California, bringing high-end touches such as a powered pop-up roof, a fully functioning kitchen with gas stove, sink and coolbox, and an auxiliary heater. If you want the most amount of home comforts, this is definitely the specification to opt for.

Though Cali Beach may be the entry point to the California range, it’s not what you’d call bare bones. It too gets a single gas hob, alongside a pull-out awning and a manual pop-up roof. Foldable camping chairs and a matching table are also cleverly integrated into the van’s cabin, meaning they take up no extra space.

What is the Volkswagen California Ocean?

Holidays within the UK have been growing in popularity during recent years, with people opting for a ‘staycation’ rather than travelling abroad more than ever before.

An easy way to do this is with a camper van and the Volkswagen California – which we’re testing here – is one of the most sought-after.

Though many people opt for a larger motorhome, the compact size and car-like driving experience has pushed people towards the California in their droves, despite a relatively high list price.

We’re testing it here in the UK in range-topping Ocean specification.

A camper van is designed to be a home-away-from-home, which is why there’s so much equipment packed into the California.

Though we’ll look at these in greater detail later on, they mean that you can easily set up camp wherever you decide – the California is very much a self-contained holiday home.

And because it’s based on the regular Transporter, you shouldn’t have to worry too much about its overall size. Yes, if you’re not used to a traditional van it may take some getting used to, but compared to a coachbuilt motorhome it’s leagues easier to drive. The California uses Volkswagen’s tried-and-tested 2.0-litre turbocharged diesel, which here pushes out 148bhp and 340Nm of torque to the front wheels via a seven-speed DSG gearbox.

Its 0-60mph Acceleration is hardly what you’d call brisk at a claimed 14.2 seconds, and neither is its 110mph top speed. However out on the road it rarely feels underpowered or unable to deal with the job in hand, which is impressive considering the amount of weight it has to pull around.

Economy-wise, Volkswagen claims 40.9mpg combined, while emissions stand at 179g/km CO2. Neither of these are bad for the segment, and when coupled with a 70-litre fuel tank mean that the California has a decent touring range of over 600 miles – depending on how you drive it, of course.

Uneventful, predictable and safe – not necessarily driving traits which will get the blood pumping, but all ones you want to associate with a camper van. The California steers and handles well given its size and weight, and there’s a little less roll in the corner than you’d expect. The steering is relatively light, but it’s reasonably accurate and allows you to get the van through bends with little fuss.

Though that engine may not be all that punchy, it gets up to a lick pretty quickly, and it feels far quicker than the numbers suggest, in fact. The DSG gearbox is the star of the show here, mind; it’s smooth, efficient and responsive. The only issue here is an occasional loss of front-end traction when pulling hard away from a junction. It’s something we’ll admit that not many people will suffer with, but hard starts from a dead stop do get the front wheels spinning in an almost impressive fashion.

The California is a classy and unassuming product, both inside and out. It’s hard to distinguish one from a regular Caravelle or Transporter from the outside, save for subtle Ocean badges dotted in various areas, and the obvious side awning.

Our car also came with optional LED headlights and daytime running lights (£1,584) and metallic paint (£696). These both combine to make the California look just a little classier.

The forward section of the California features two wide, comfortable and supportive captain’s chairs, which feature sizeable armrests likely to help make longer journeys that little bit more comfortable. These can be rotated round to face the rear seats to create an open seating area.

There’s plenty of storage dotted throughout the cabin, and then you have the cooker and sink positioned under a glass top to the side of the car. There’s even a fridge. Up top, you can pop the roof (electrically) to extend the headroom of the California, and this also features a roof bed and stowage component. You can even program the heating when parked via a remote control.

Everything feels sturdy and built-to-last – which is just what you want from a vehicle which is going to be going here, there and everywhere.

There’s a wealth of standard equipment accompanying the California, but then you’d hope there to be given its price.

You get three-zone climate control included as part of the car’s cost, along with 17-inch alloy wheels, the aforementioned pop-up roof and all of the major creature comforts you’d expect from a camper.

It’s a shame that given the van’s price that you don’t get Volkswagen’s excellent Discover Media navigation system as standard.

It houses functions such as satellite navigation and media controls, and just as in other Volkswagen products, it’s brilliantly simple to use with clear graphics and a logically laid-out design. But at £1,578, it’s a costly addition – and one you’d expect to be included as standard in the top-spec Ocean model.

The California is geared towards adventures and, if that’s your thing, then you won’t for a second be disappointed by picking this well-finished Volkswagen. It’s easy to drive – one of its biggest merits – yet it looks premium enough to be parked up in even the smartest of campsites.

Expensive it may be, but many will see the California as an investment, in the same vein as a classic sports car, to be enjoyed over many years and in all manner of places.

If you look at it that way, it makes a lot of sense indeed.