The latest Golf showcases a refreshed exterior and a wider profile, alongside excellent technology that gives you a hatchback in a class of its own. The new Golf 8 combines a more modern exterior design with a comprehensive range of innovative technology.

The Volkswagen Golf 8 is a truly modern hatchback. The exterior of this model features a clean design with narrow LED headlights and a leaner front grille. The more defined bumper gives the Golf 8 now sits lower to the ground, allowing this VW hatchback to achieve a more responsive performance. It comes with LED headlights and integrated fog lights as standard. However if you choose the IQ.LIGHT Matrix LED lights you’ll also receive Dynamic Light Assist, which automatically adjusts the brightness when it detects oncoming traffic.

Choose the optional ambient lighting package and illuminate the interior from a selection of 32 colours and make your Golf 8 your own.​​​​

Home to a 10-inch screen, this screen allows you to easily adjust your driving position, air con, radio, navigation and Driver Assistance systems all in one place. Once logged in, your Golf 8 will remember your preferences. The intelligent head-Up display projects your speedometer and Adapted Cruise Control information straight onto the windshield. As well as having great visibility of the sat-nav and media settings which are displayed on the digital cockpit, which is a high-definition screen that sits right behind the steering wheel. If all thee great features weren't enough, the Golf 8 has voice control that allows you to switch between radio stations, scroll through your address book, or change course on your Sat-Nav all without taking your attention off the road.

Car2X - This technology wirelessly communicates with other Car2X enabled vehicles on the road to provide you with the most up to date traffic information. It uses the information it receives off other vehicles to detect when the end of the jam is coming up and braces the car’s Adaptive Cruise Control.

Connect Plus - App Connect syncs your smartphone to your Golf 8 and gives you access to your favourite music/podcasts as well as breakdown Call, the Online Anti-Theft Alarm, Service Scheduling and will also send you real-time traffic updates.

Dynamic Cruise Control - You have the choice of three driving settings in the New Volkswagen Golf: COMFORT for a smooth ride, SPORT for a firm and more responsive drive, and finally ECO which adjusts the car’s configuration to save on fuel. 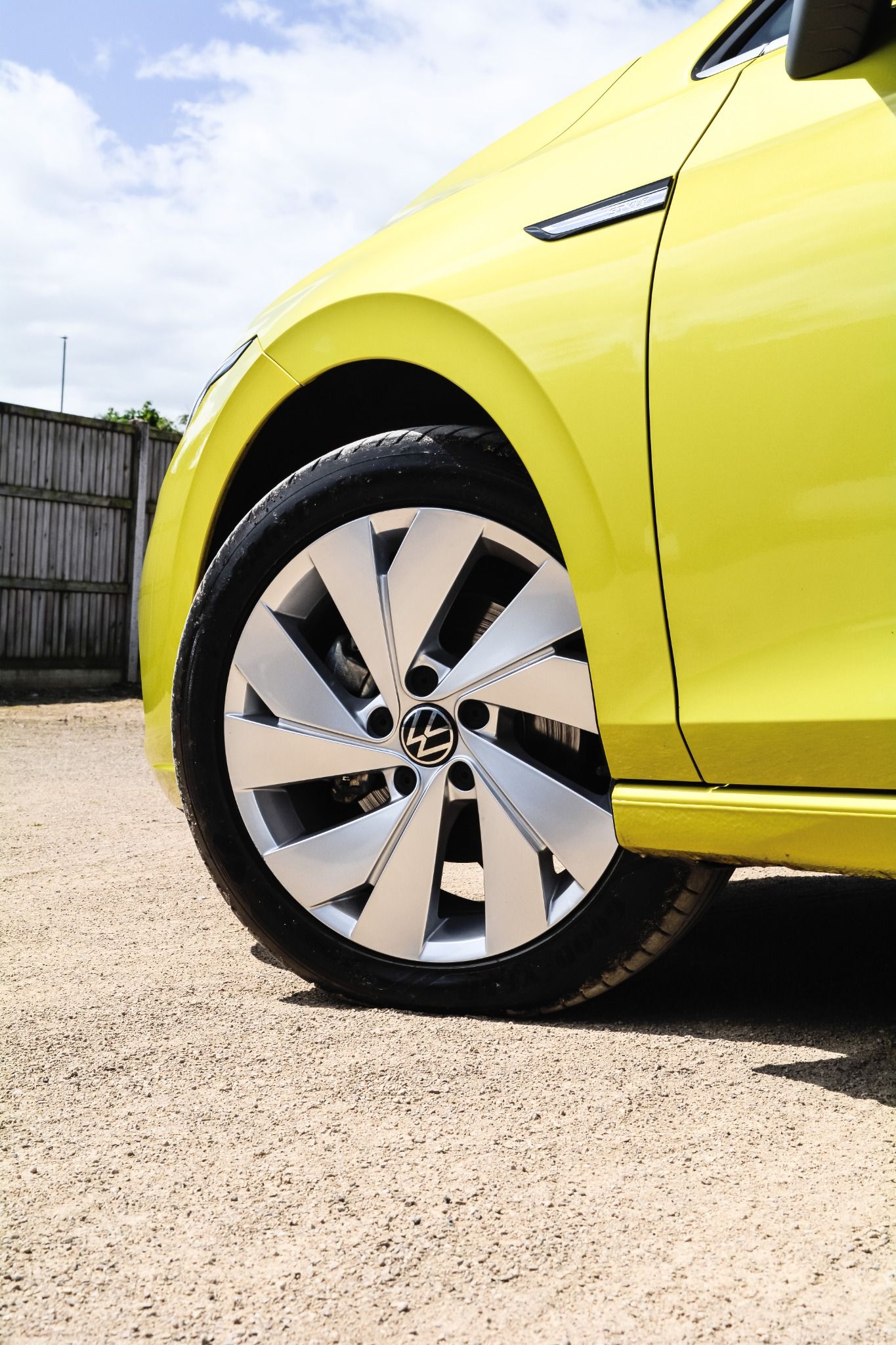 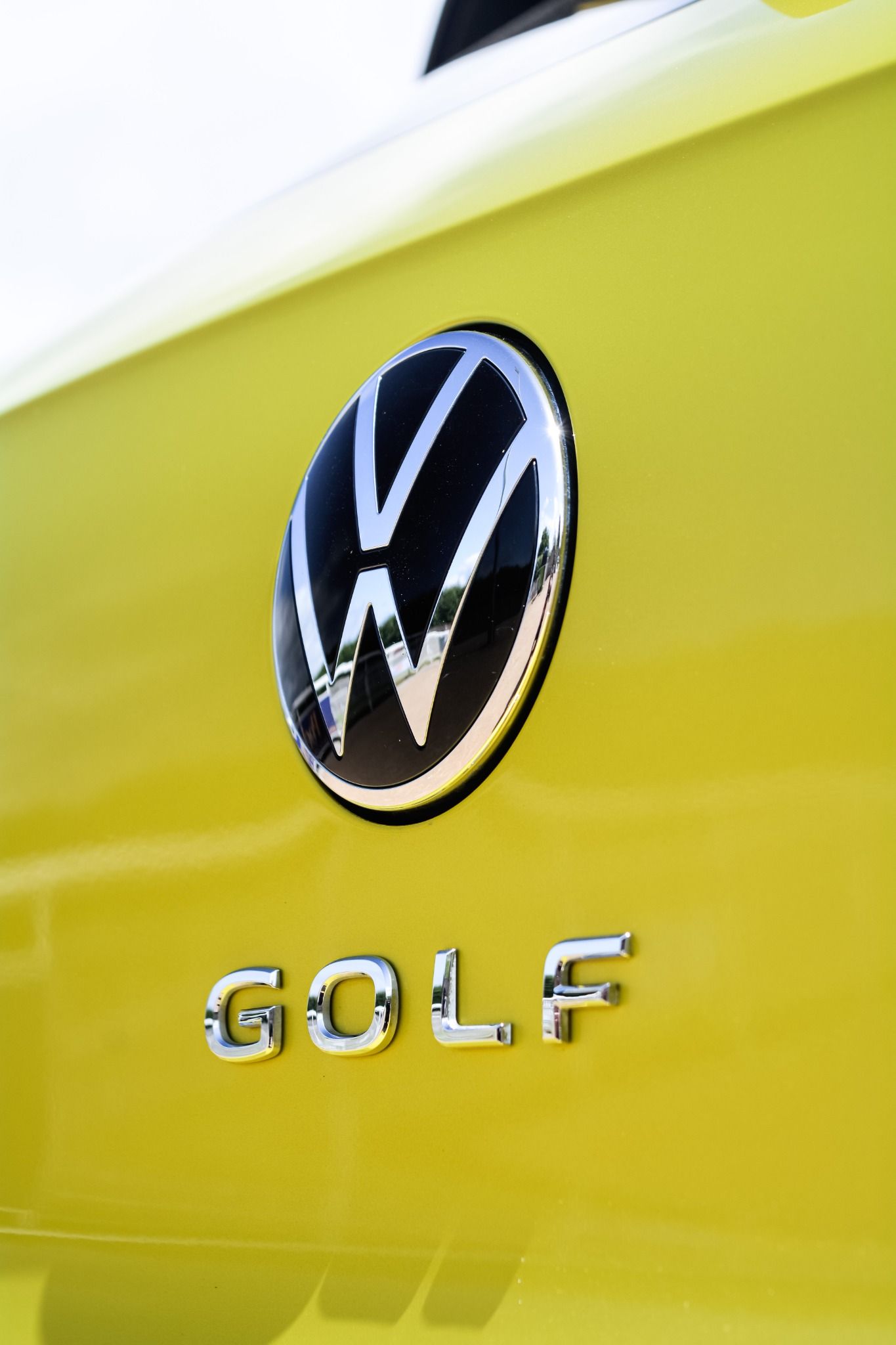 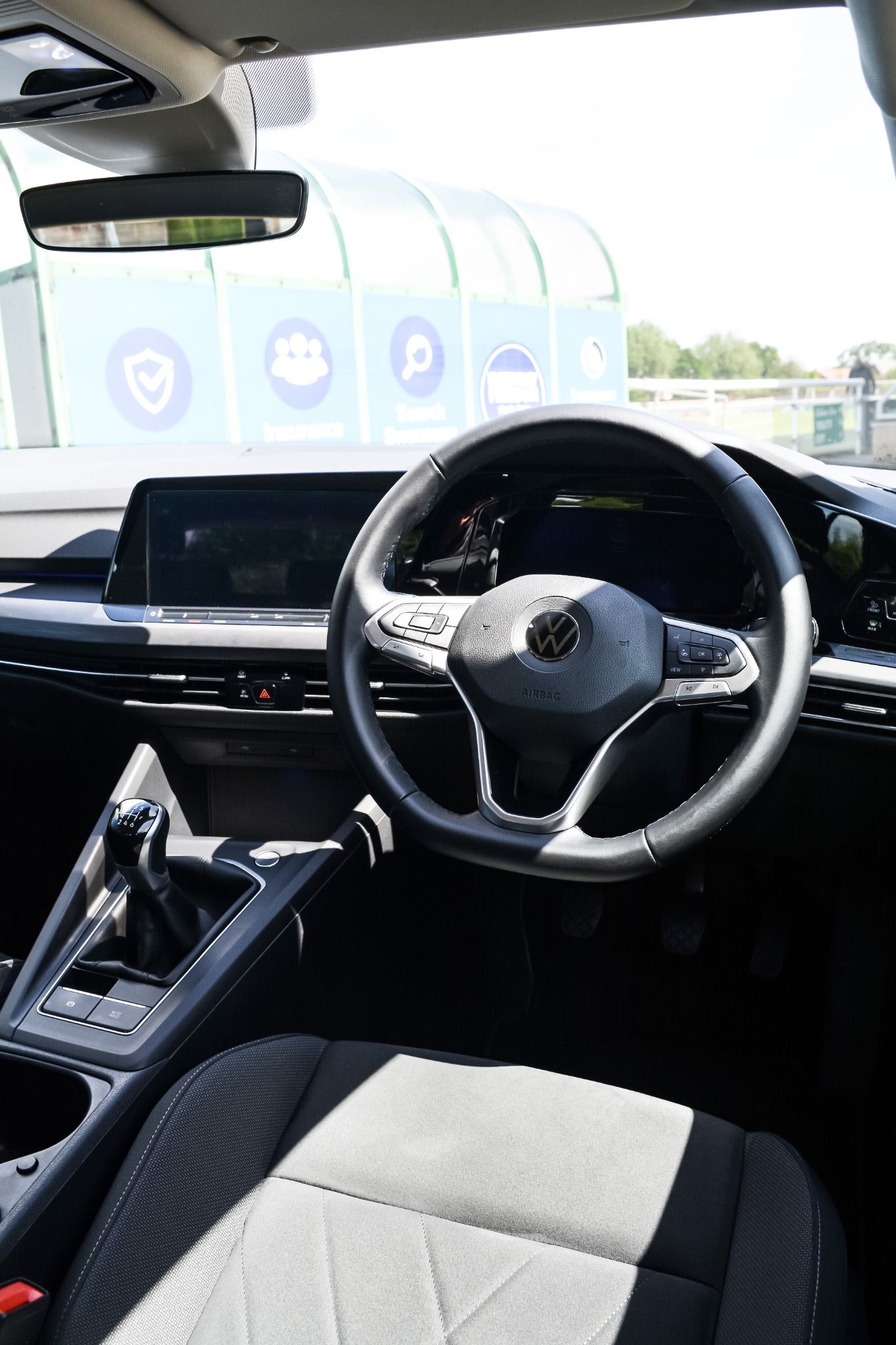 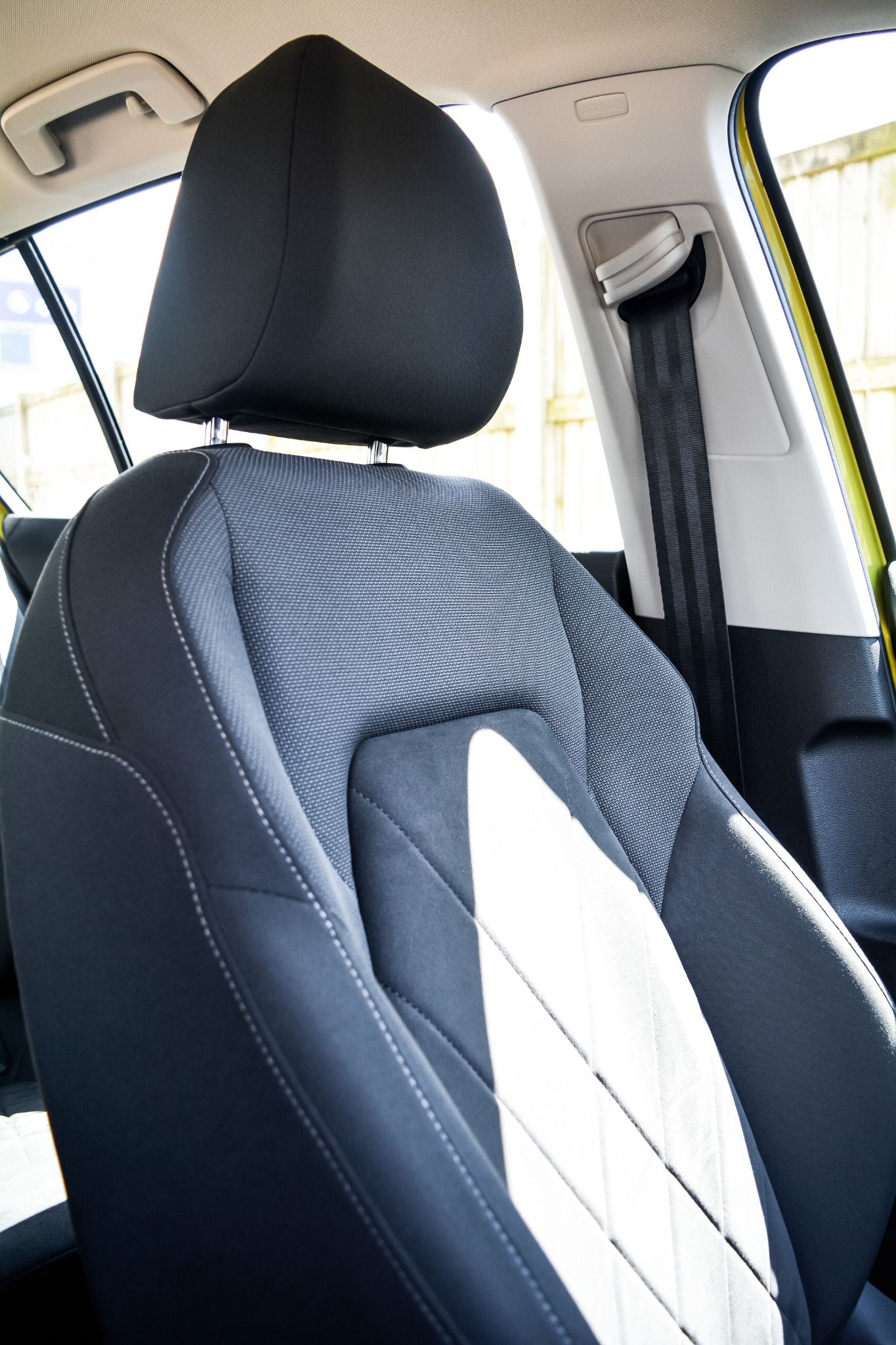 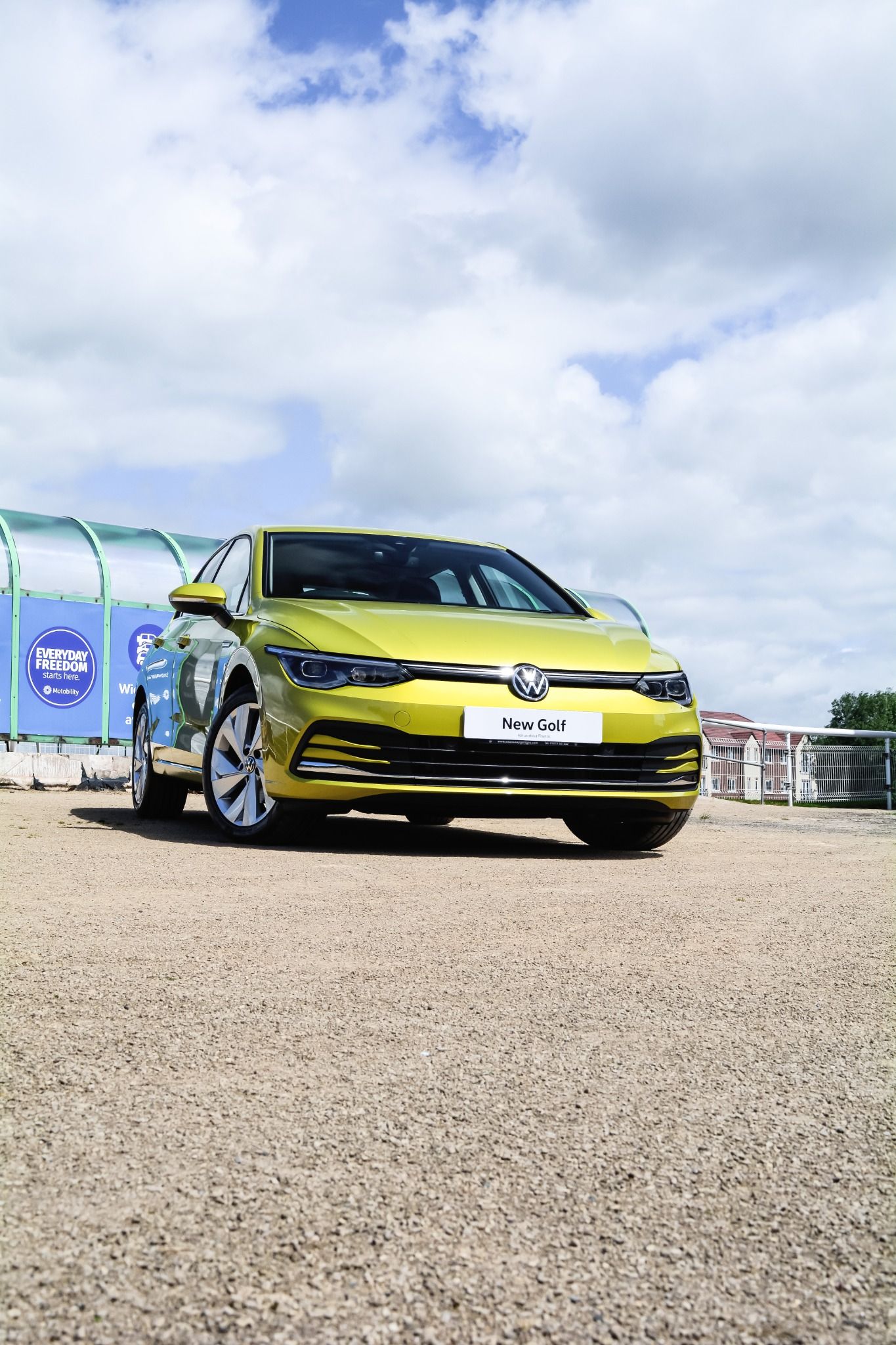 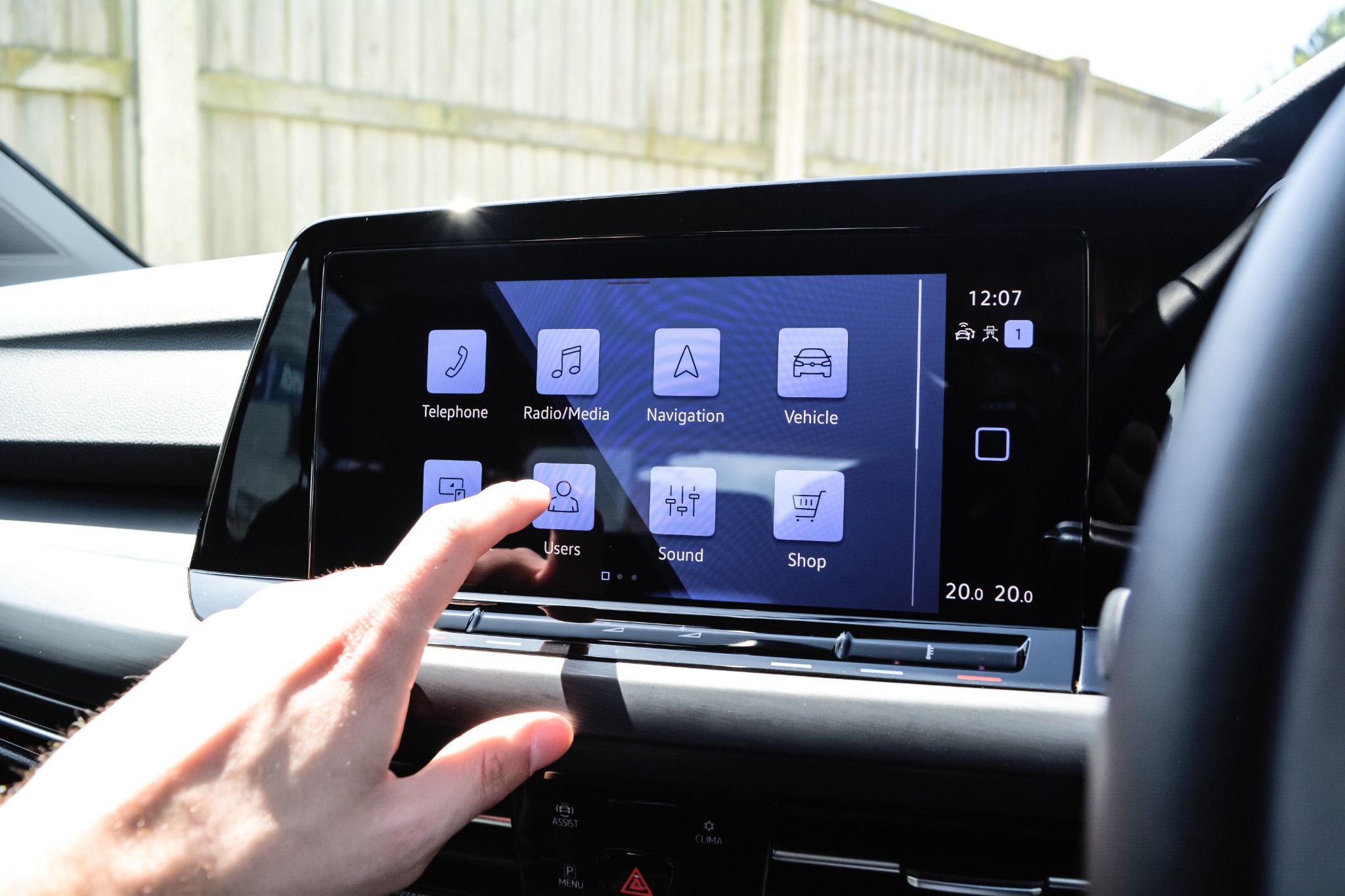 What trim levels are on the VW Golf?

Features of the VW Golf 8 Style:

Features of the VW Golf 8 R-Line:

​Features of the VW Golf 8 GTI:

Just like mince pies at Christmas and hot cross buns at Easter, the Volkswagen Golf seems to be eternal. It’s remained unfazed by the whole ‘dieselgate’ debacle and has cleverly evolved to become electrified and connected – ensuring VW doesn’t shun its changing customers.

Few cars can rival the longevity of the Golf, which has survived eight generations and is fast creeping up on 50 years of existence. Times have changed massively in that time, and so have the people buying them.

It’s by far Volkswagen’s most popular car and is arguably one of the most important new cars on sale – given it’s rarely seen outside of the top five best-selling cars list. After more than 45 years on sale, Volkswagen has managed to produce a remarkable 35 million examples, and come February 2020 you’ll be able to buy this all-new eighth-generation example. But can this new version continue to lead the path like the last example did?

This latest model is crucial for Volkswagen to get right, so does it?

In typical Volkswagen fashion, this latest model looks like it could just be a facelift, but it’s underneath and inside where Volkswagen has been waving its magic wand.

Starting with the interior, Volkswagen has completely digitalised the cabin with touch pads all over the place, getting rid of the majority of physical buttons and fitting the car with a 10-inch touchscreen and digital cockpit as standard, the latter being unique to this class – for the time being at least.

Further tech introduced includes Car2X – essentially where the Golf can ‘communicate’ with other cars and infrastructure.

And in terms of electrification, Volkswagen is introducing mild-hybrid technology to the Golf (badged as the eTSI) – at first with a TSI petrol engine when paired with an automatic transmission.

Powering our test car is the 128bhp version of the 1.5-litre petrol engine (not a mild-hybrid – you need the 148bhp option for that), which is mated to a six-speed manual transmission. This is expected to be the best-selling configuration, and be a popular choice with the fleet market.

It’s a good choice for the Golf – delivering all the power that many will ever need, as it will accelerate from 0-60mph in nine seconds and reach a top speed of 133mph. It’s also impressively refined, as you can barely even hear it at low revs. Cylinder deactivation technology has also been added to aid efficiency, though figures aren’t available just yet.

While not delivering the punch of the larger petrol option, it’s a good all-rounder, feeling plentiful at motorway speeds and delivering a dose of buzz for swift overtakes, though if you aren’t in the right gear it can feel sluggish, however, the 148bhp variant of the same engine provides the remedy for this.

Further engines joining the range include a turbocharged 1.0-litre petrol, a 2.0-litre diesel and also a plug-in hybrid.

For years the regular (non-GTI) Golfs have been known for being comfortable and refined options, though lacking in driving enjoyment, and this undoubtedly continues with the latest version.

Even at higher speeds, this model is remarkably refined, and it’s only the odd bit of wind noise that makes its way into the cabin. Add in a comfortable and supple ride, which doesn’t even seem phased by the larger alloy wheels our test car was riding on, and you soon realise why the Golf is a popular motorway cruiser.

But, as was the case before, this isn’t a model that is a byword for driver enjoyment. You’ll have to wait for the Golf GTI, TCR and R versions to arrive for that.

For now, we can only imagine how silky smooth it feels on the entry-level 16s. It’s certainly no surprise that the Golf has become such a fleet favourite – there are few better cars at this price point that would be more comfortable to trundle up and down the motorway in. That’ll be ideal for the vast majority of buyers, but if you want a dash of sparkle behind the wheel, the Ford Focus or Mazda 3 are better choices. 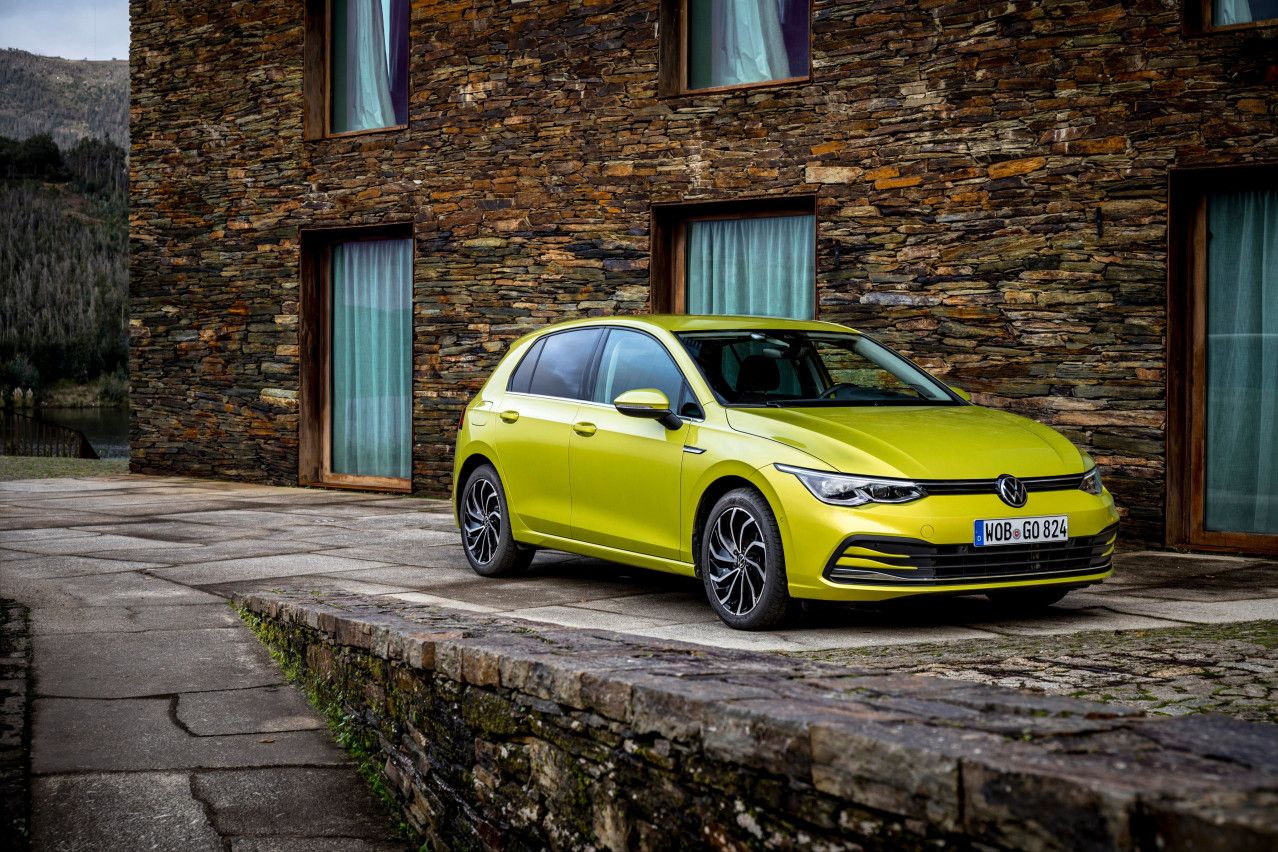 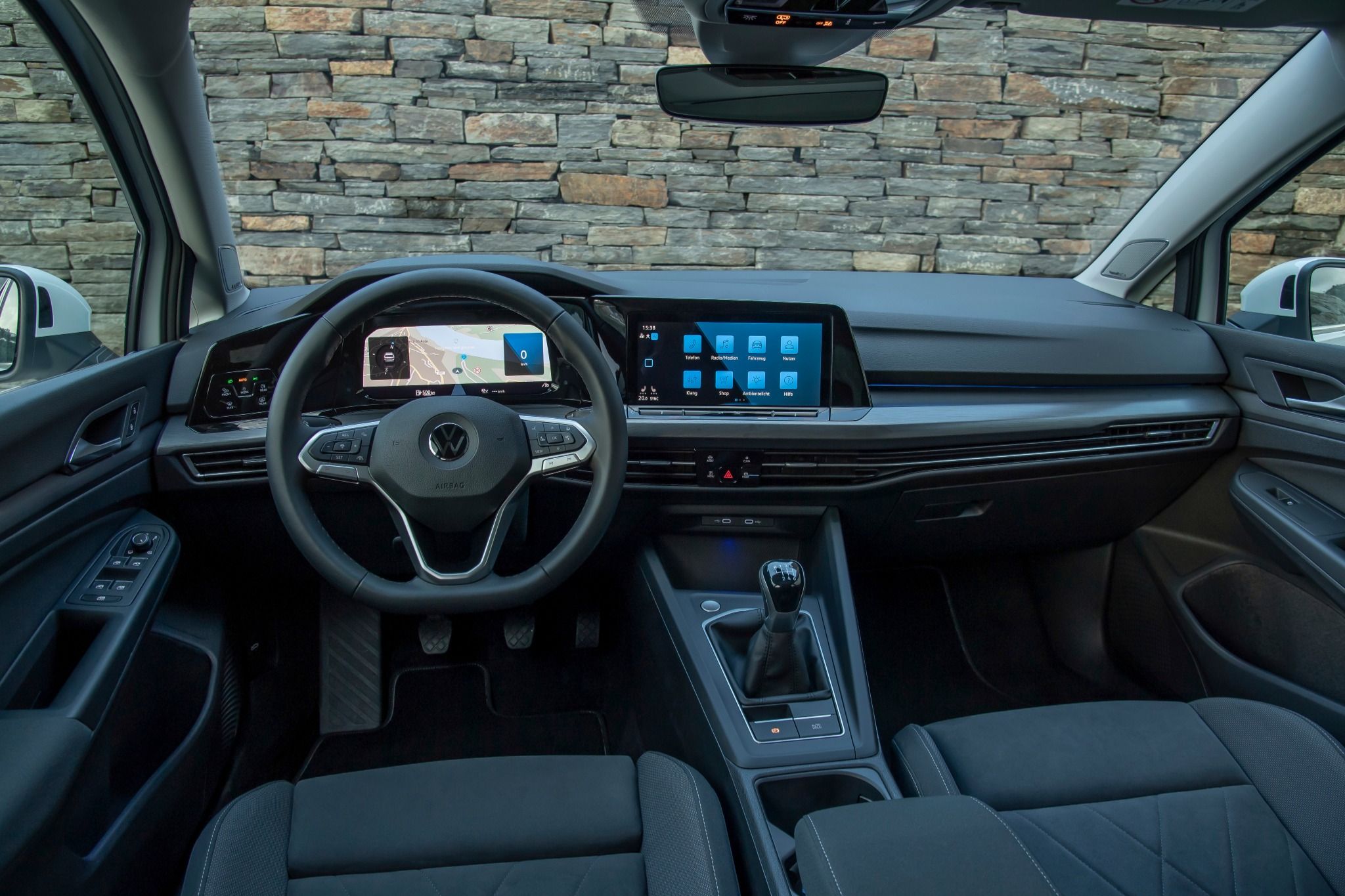 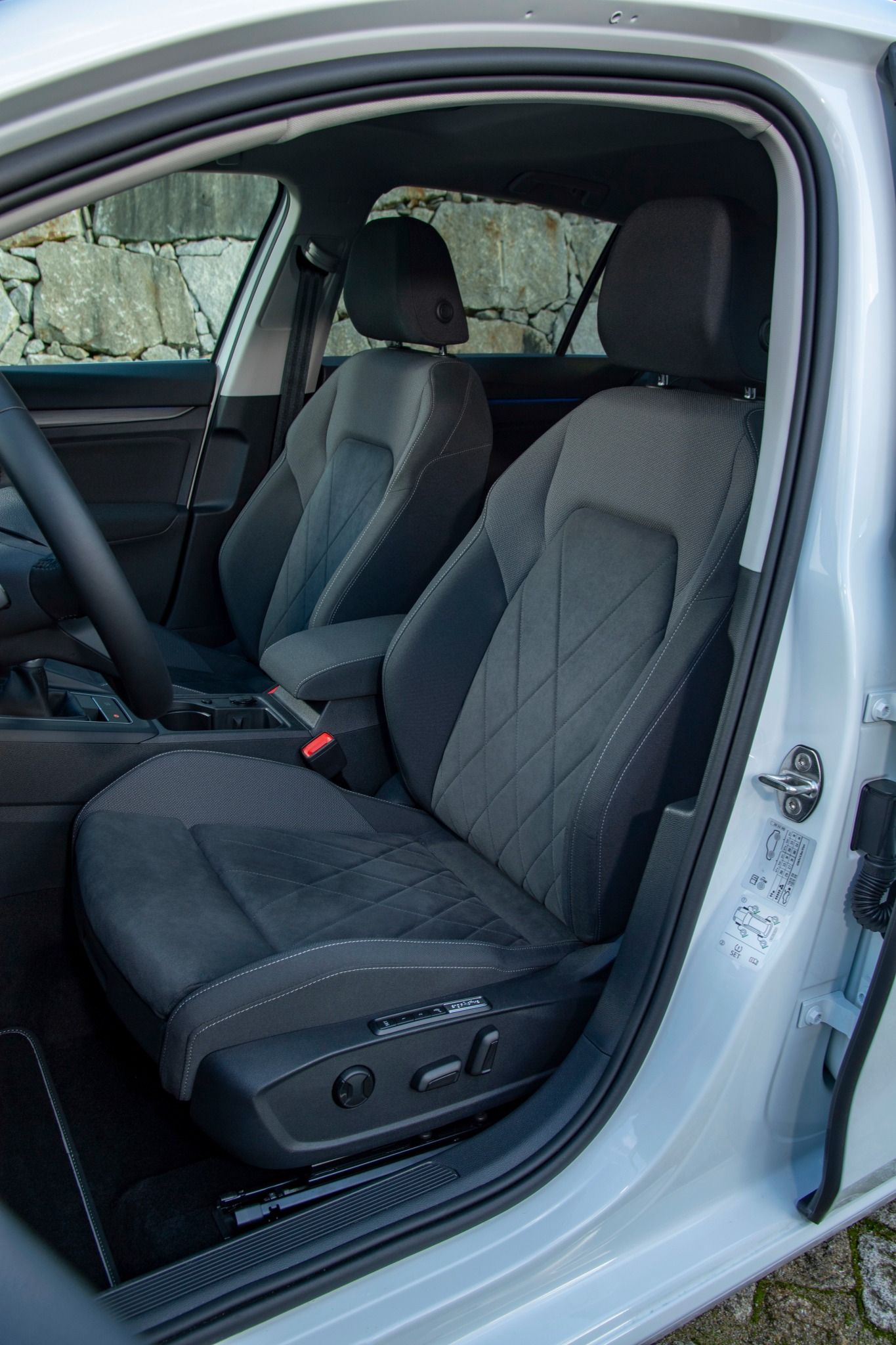 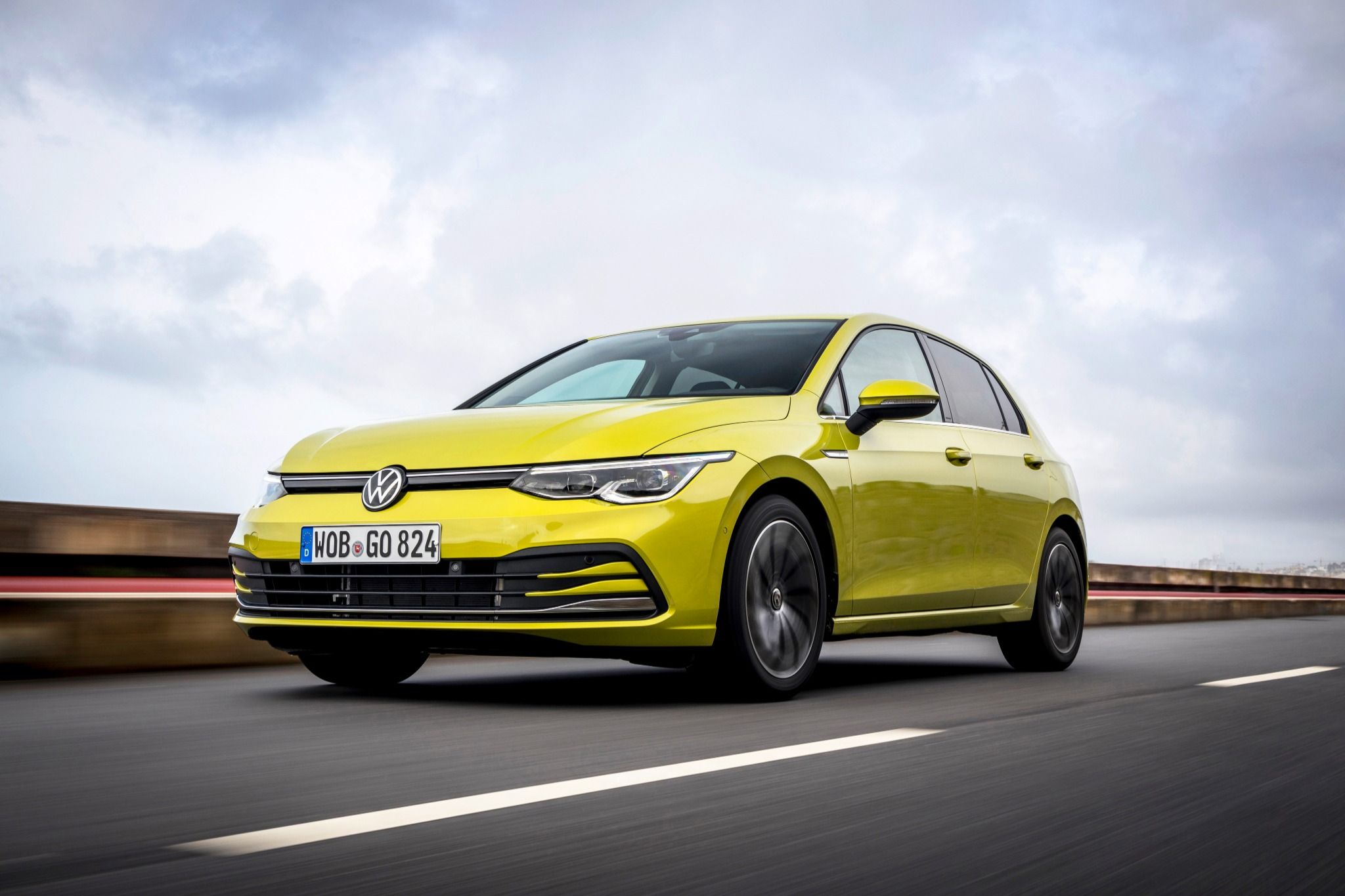 In true VW fashion, the Golf’s design has evolved rather than revolved – though why would you change such a popular and winning formula?

Viewed side-on, you’d be hard-pressed to notice the difference, aside from the all-new line-up of alloy wheels – particularly as it retains near-matching dimensions to the outgoing car. But it’s the front where you’ll notice most of the changes with its new LED headlights (as standard), while a full-length front apron gives the Golf a more aggressive look than before.

Jumping to the rear, you’ll notice Volkswagen’s prominent new logo (it’s slimmer than before, if you couldn’t tell) along with more prominent ‘GOLF’ lettering beneath the badge – a classy touch in our eyes. The full suite of LED lights are also prominent at the rear. So, while this might not be a revolutionary design, it’s a classy update and one that will undoubtedly appeal to the Golf’s loyal buyers.

Things might not have changed much on the outside, but they sure have on the inside, which is headed up by a huge 10-inch touchscreen that seems to control just about everything. All physical buttons seem to have been eradicated to create this entirely digitalised interior – helped by the new ‘Hello Volkswagen’ voice control service (imagine Siri but for your car) and touch buttons dotted throughout, even for the sunroof.

It certainly looks the part, and will ensure the Golf remains fresh for years to come, but it personally feels like a step too far – using a touchscreen for something as simple as changing the climate control is just distracting and more time consuming that using a traditional button or knob would be.

Aside from that, it’s all business as usual inside, with the Golf offering a generous amount of rear space for its size. While the 380-litre boot isn’t class-leading, it’s more than generous enough for a family hatchback. Visibility is also faultless.

If you’re familiar with VW’s trim level structure, you’ll know all about Volkswagen’s trademark S, SE and SE L grades that have lasted the test of time. However, Volkswagen UK is adopting the German trim levels this time, which means the new grades are Golf, Life, Style and R-Line – the latter being the only trim carried over from before.

Standard kit is excellent and includes LED headlights and keyless start plus a 10-inch infotainment screen that offers a host of connected services as well as the digital cockpit. Plenty of safety kit is also offered – namely lane-keep assist and automatic emergency braking.

Volkswagen already had a near-class-leading model with the outgoing Golf, and it didn’t need to do a great deal to this new eighth-generation model to bring it right to the forefront of the competitive family hatchback class.

With this 1.5-litre petrol configuration, it leaves you wanting for very little, and the Golf would be a terrific choice if you spend lots of time cruising on the motorway. Although the fiddly new touchscreen might be a gripe at first, we’re in no doubt that it would be quickly adjusted to once you’re living with it on a daily basis. With efficiency figures and pricing yet to be revealed, it’s a bit soon to say if the new Golf is the new ‘car to beat’ in this class, although the pathway seems to have been laid.

It seems that the Golf will to continue being the benchmark in the family hatchback class.