From£24,530.00 OTR
£2,838.49
Find Out More
We have offers across the range and we are here to help find the best offer for you. We can also tailor a finance solution for you and also organise your part exchange. Please contact us for more information on our great range of offers. Send an Enquiry
Volkswagen Golf GTE Your Next Steps
Send an Enquiry
Search Stock
Find a Dealer
View All Offers

The GTE looks like a Golf and drives like one too. In fact, this plug-in hybrid variant enables you to experience the best the Golf has to offer as you do your bit for the environment with a range of up to up to 40 miles. Enjoy a GTI-like performance, with 245 PS, while leaving a tiny carbon tyre print.

The LED background lighting adds accents of light in all the right places, whilst a leather-wrapped sports steering wheel is adorned with the GTE insignia.

High-resolution displays dominate the cockpit, and the majority of functions, including the radio, air conditioning and lighting, can be operated using touch-sensitive surfaces and sliders, simply and intuitively.

Free & Fast Online Part Exchange Valuations Interested in selling or part-exchanging? Use our tool to find out what your vehicle is worth. Value Now

An almost silent electric motor with seamless power transmission and an innovative 1.4L TSI direct-injection petrol engine with 150 PS, the GTE has three intuitive hybrid operating modes.When using “Boost”, the electric motor works with the TSI direct-injection petrol engine to achieve extra torque, up to 400Nm. The function can be selected in “Hybrid/Sport” mode.

The GTE has the power to proceed from a standing stop to 62mph in approximately 6.7 seconds. The vehicle is capable of 135mph too but this doesn’t impinge on its fuel efficiency. The GTE returns an impressive 246.1 mpg and CO2 emissions as low as 26g/km.

The lithium-ion battery of the GTE can fully charge from 220 minutes (with an optional wallbox, 5 hours using a normal socket) and offers up to a 32-mile range (WLTP*) on electric power alone.

*Depending on the driving style and power requirements, such as air conditioning or lighting.

The Golf GTE has a Digital Cockpit Pro as standard, with a 10” display. When combined with the optional “Discover Pro” radio navigation system, the Digital Cockpit Pro can be upgraded to the Innovision Cockpit, enabling the two displays to be merged, and you can set up favourite functions on the home screen, just as you would your smartphone.

Travel Assist with Emergency Assist, including Side Assist are among a wide range of driver aids that come as standard with the GTD. Plus, with the optional head-up display, there’s no need to take your eyes off the road.

What colours does the Golf GTE come in?

What features does the Golf GTE come with?

What wheels are available with the Golf GTE?

Choose from two alloy wheel designs ranging in size from 17 inches to 18 inches:

Check out the Accessories for the Volkswagen Golf!

The Golf GTE has been designed to offer the exceptionally low running costs of a plug-in hybrid with the involving drive of a sports hatch. Powered by a 1.4-litre turbocharged petrol engine linked to an electric motor, the GTE has a claimed economy of 156.9mpg and yet, despite this, should crack 60mph in under eight seconds. Of course, being a Golf it also affords its owners a high level of build quality, along with a good dose of practicality.

The main talking point of the GTE is its powertrain. Underneath the bonnet sits a 1.4-litre turbocharged petrol engine, which is combined with an electric motor to produce 201bhp and 350Nm. Power is sent to the front wheels via a six-speed dual-clutch automatic gearbox.

With a theoretical range of 580 miles, the GTE is ideal for those looking to do low-emissions, high-mileage journeys.

The exterior has also been updated to differentiate the GTE from the rest of the Golf range, meaning you’ll find C-shaped LED daytime running lights as well as blue accents across the radiator grille – replacing the standard GTI’s red version.

As mentioned, the Golf GTE utilises a hybrid powertrain designed to give good levels of performance as well as lower emissions. As such, it should reach 60mph in 7.4 seconds before hitting a top speed of 138mph. However, thanks to clever fuel-saving technology it has a claimed combined economy of 156.9mpg and emits just 40g/km CO2 in this higher-spec Advance version.

The 8.7 kWh lithium-ion battery can be charged via either a conventional domestic socket or a wall-mounted charge box. It’ll take 3h 45m to hit fully charged from empty with the former, falling to 2h 15m in the latter. There’s also an in-built e-manager, which allows the driver to preset the vehicle’s charging time, as well as the car’s interior cooling or heating – these can be controlled via the My Volkswagen app. 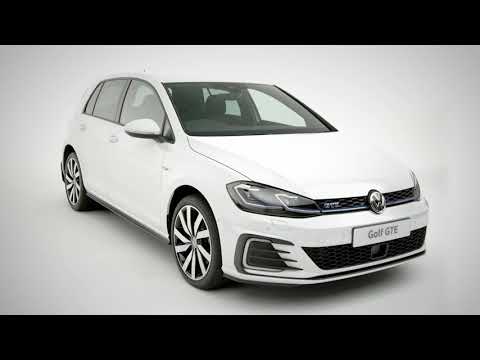 Anything with a GT badge in the Volkswagen range tends to inspire thoughts of a sporty, involving drive. This is also true of the GTE with its well-weighted steering and eager turn-in, even with that added weight of the lithium-ion battery.

The GTE is capable of reaching up to 81mph in all-electric mode, which means that all manner of journeys can be undertaken without troubling the petrol engine. That said, should you want a combination of both powertrains then the GTE button can be pressed, and this gives the best overall performance.

The GTE is a well-judged car in terms of styling. There’s just enough to make it different from the rest of the Golf range, without making it too out-there. The C-shaped LED daytime running lights fitted also feature on the all-electric E-Golf, but here help the GTE stand out even further. You also get blue accents replacing the GTI’s red versions – and you’ll find this running across the radiator grille and into the headlights.

The GTE’s interior exhibits all of the trademarks you’d expect to find in the GTI – the tartan sports seats take pride of place inside (though use blue rather than the traditional red), as well as a flat- bottomed steering wheel. Everything feels well screwed together, and everything you touch is made to a high quality. The switchgear, for instance, operates with plenty of solidity while the buttons on the multifunction steering wheel are rugged enough for many years of use to come.

Practicality levels are good, with plenty of headroom for those sat in the back and equally as much for those in the front, so the argument for shotgun won't be as intense as it used to be.

As one of the more ‘premium’ specifications in the Golf range, the GTE comes with a decent amount of standard equipment. The Advance-spec car comes with Volkswagen’s latest Discover Navigation infotainment system, heated front seats and 18-inch wheels. The satellite navigation is also in-built with the ability to identify potential destinations within the car’s all-electric range, as well as charging points nearby. In addition, you get DAB radio included as well as Bluetooth connectivity.

Prices for the GTE start at £29,635 inclusive of the government’s £2,500 grant. However, if you're after the Advance-spec car, you'll be looking a little more expensive at £31,485 including the grant.

The Volkswagen Golf GTE is an excellent marker in terms of where we are with shifting the hot hatch spirit into the electric market. It’s very economical, offers a decent enough electric range and is thoroughly well built. If you’re looking to keep running costs low while doing so in a smart, well-styled and practical hatchback then the GTE could be for you.

†At the end of the agreement there are three options: i) pay the optional final payment and own the vehicle; ii) return the vehicle: subject to excess mileage and fair wear and tear, charges may apply; or iii) replace: part exchange the vehicle

1. £500 towards your deposit when purchased on Solutions PCP.

2. Acceptance fee is not required.

3. Payable at the end of your agreement.

With Solutions Personal Contract Plan. 18s+. Subject to availability and status. T&Cs apply. Ordered by 31/03/2021 from participating Retailers. Indemnities may be required. Subject to changes in vehicle or equipment prices. Not available in conjunction with any other offer and may be varied or withdrawn at any time. Accurate at time of publication 01/01/21. Freepost Volkswagen Financial Services. *Service plan must be purchased at point of sale and covers the first two consecutive services limited to 1x oil service and 1x oil and inspection service.

View All Our Locations
Your lifestyle. Your car. Your Volkswagen.
Back to Top
New Cars
Used Cars
Offers
Servicing
Get a Free Valuation
Customer Testimonials
Car Dealerships
Motability
Careers
COVID-19
Company Info
© Swansway Group
Third Avenue, Weston Road, Crewe, United Kingdom, CW1 6XZ
Reg Office: Swansway Garages Ltd, Gateway, Crewe, CW1 6YY, United Kingdom
Reg. Company Number: 04507008
VAT Reg. No. 823 8072 33
Financial Disclosure
Swansway Garages Limited are a credit broker and not a lender. We are Authorised and Regulated by the Financial Conduct Authority (FCA) under reference number 304920. Finance is Subject to status. Other offers may be available but cannot be used in conjunction with this offer. We work with a number of carefully selected credit providers who may be able to offer you finance for your purchase.
Social

Legal
Back
Vehicle Valuation
Compare Saved Vehicles
Top
Close
Your Cookie Settings
Select your cookie settings
Strictly Necessary Strictly Necessary cookies are essential to let you move around the website and use its features, such as accessing secure areas, shopping baskets and online billing. These cookies allow our website to provide services at your request.
Functional Functionality cookies are used to remember the choices you make, e.g. your user name, log in details and language preferences. They also remember any customisations you make to the website to give you enhanced, more personal features.
Targeting Targeting cookies collect information about your browsing habits to deliver adverts which are more relevant to you and your interests. They also measure the effectiveness of advertising campaigns.
Save Settings
Cancel Changes

Your settings will take affect when you refresh the page or move to a new page. Find out more about cookies