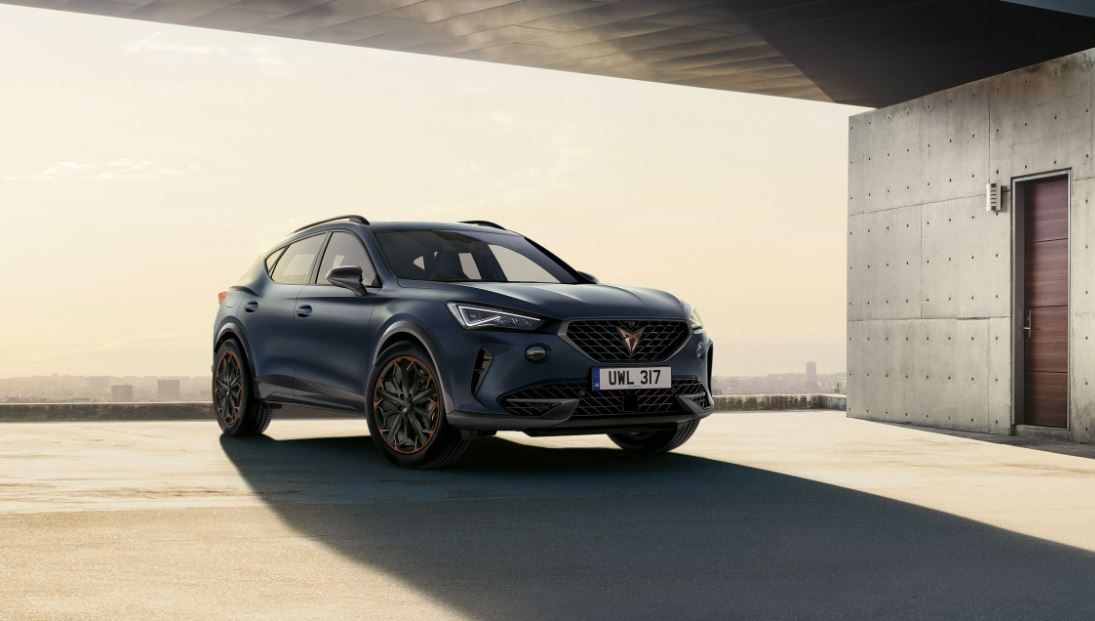 CUPRA’s Formentor has arrived as the firm’s first standalone model, following on from the SEAT-based Ateca. Entering into the ever-flourishing crossover market, it’s got some trademark Cupra touches and performance-related features, but is also available with a series of more everyday engine choices too.

Let’s take a look at some of the key features you need to know about the new CUPRA Formentor.​

The Formentor benefits from the latest technology being used across the Volkswagen Group, which means that the cabin is dominated by screens and displays. However, the basics have been covered off well too, with good storage up front and a relatively spacious rear seating area. A range of copper-coloured elements - a CUPRA ​hallmark - help to brighten up the cabin even further too.

When it comes to boot space, there’s 450 litres available in front-wheel-drive versions, though all-wheel-drive variants bring a still-respectable 420 litres. 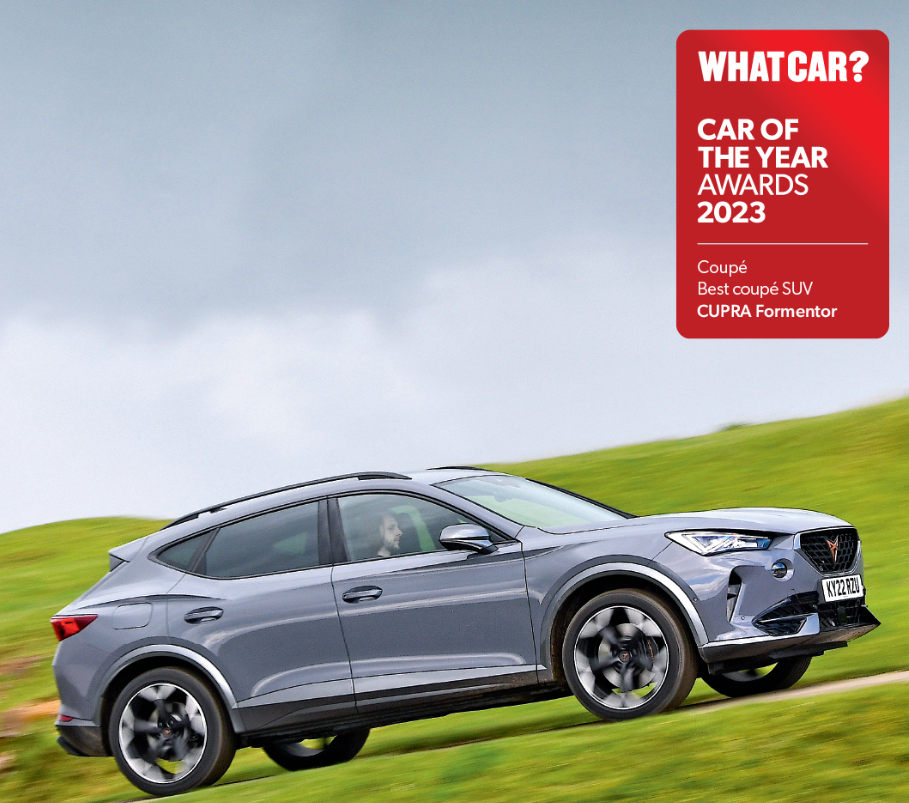 The exterior design of the Formentor has been designed to stand out from the crowd and it certainly achieves that. The front grille’s intricate design gives it a premium appeal, while the copper-coloured CUPRA badge sits loud and proud in front of it.

Around the back it’s the single-piece rear light that’ll likely attract attention, linking together the two LED tail lights. It’s a clever design, toeing the line in between a hatchback and SUV well.

As we’ve already mentioned, the Formentor is practically bristling with equipment. You get a huge 12-inch central touchscreen and it’s here that you’ll access key media and satellite navigation functions, as well as the heating and ventilation controls. You get wireless Apple CarPlay and Android Auto too, which makes integrating your smartphone into the car’s system even easier.

There’s a configurable screen ahead of the driver too, replacing the conventional dials. These are really clear and easy to read and can be used to display all manner of readouts.

If you’re after performance, you’re unlikely to be disappointed by the Formentor. Range-topping cars boast a powerful turbocharged 2.0-litre petrol engine with 306bhp and 400Nm of torque, enabling a 0-60mph time of 4.7 seconds. It’s all-wheel-drive too, so you get great traction even in poor conditions.

However, if you’re wanting something a little greener, there’s also a plug-in hybrid variant alongside less-powerful petrol engines which major less on outright performance and focus more on lower running costs. 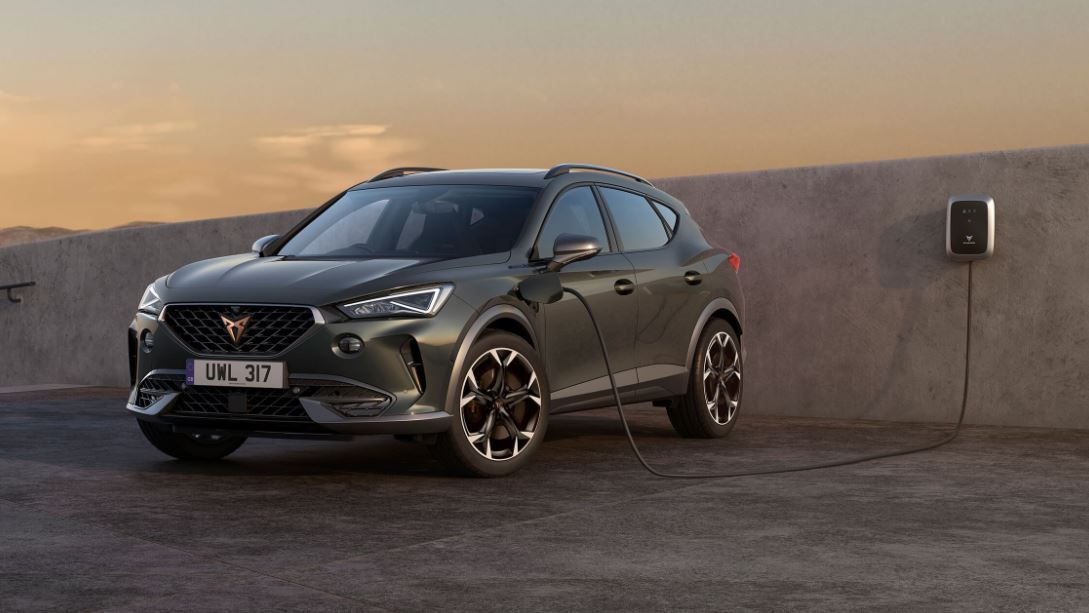 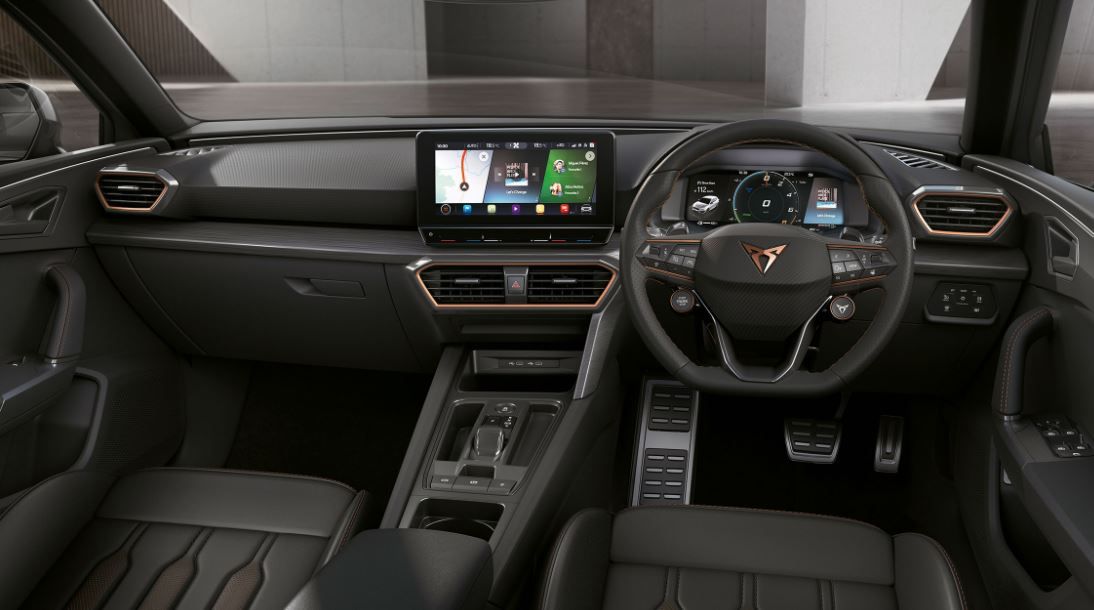 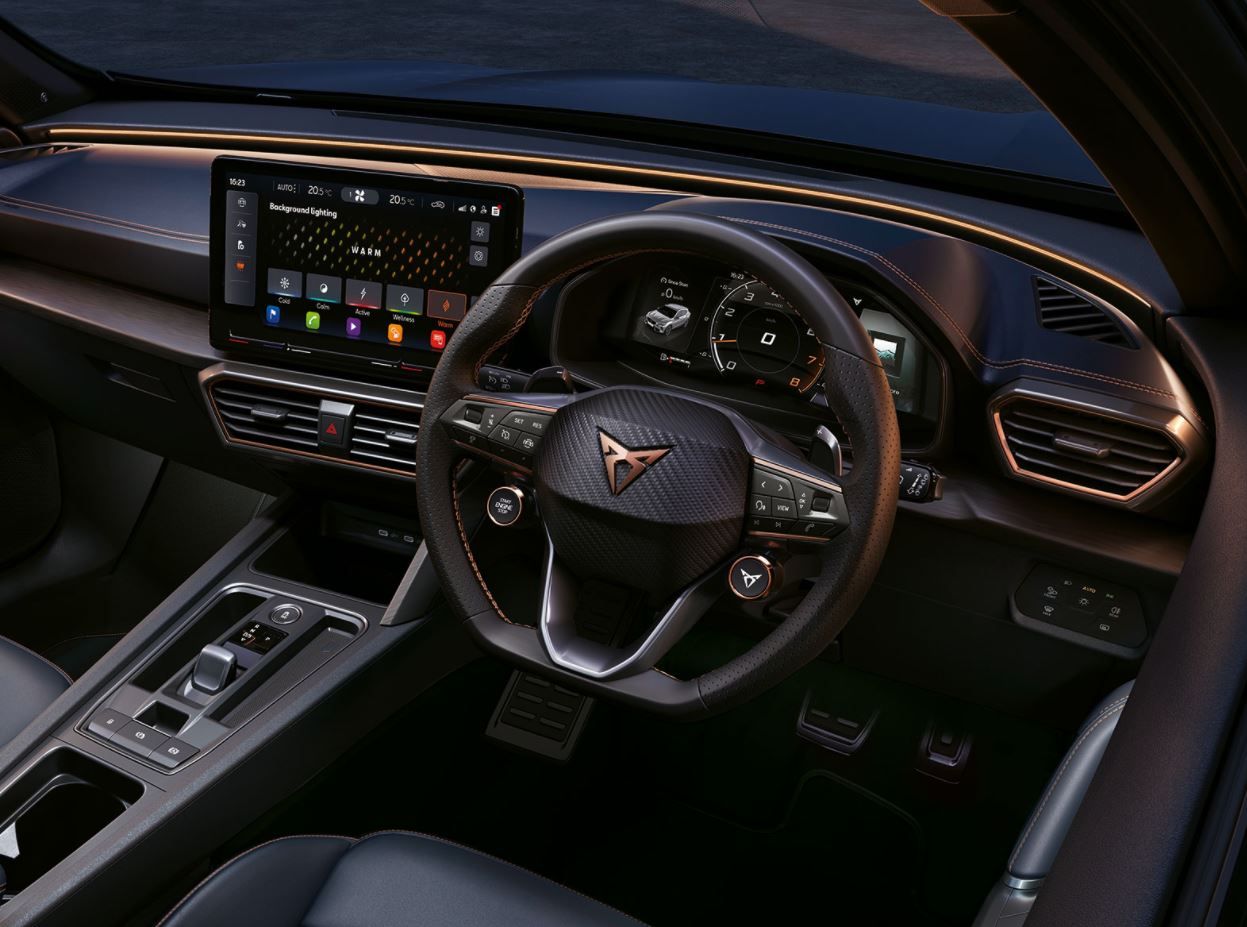 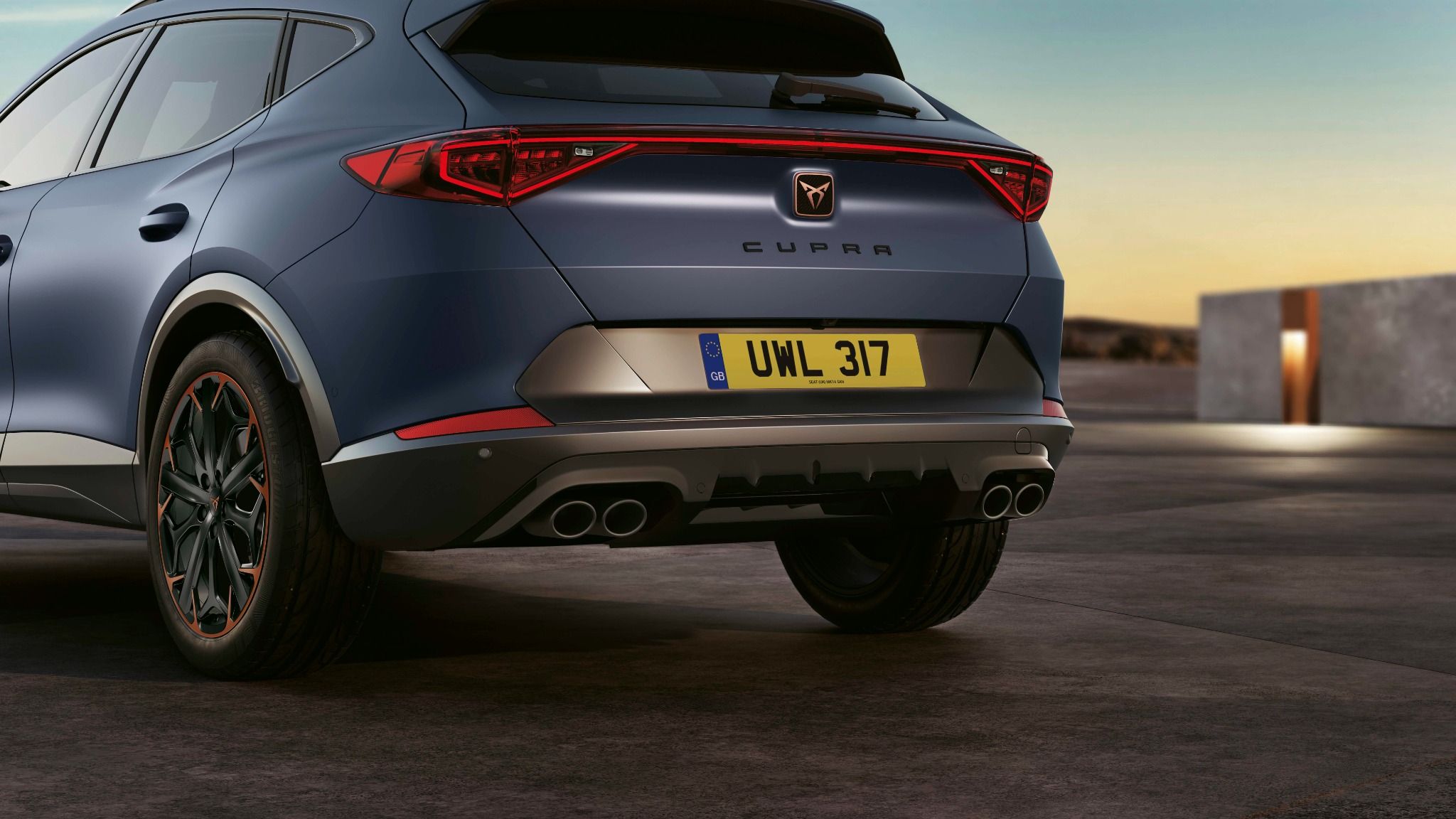 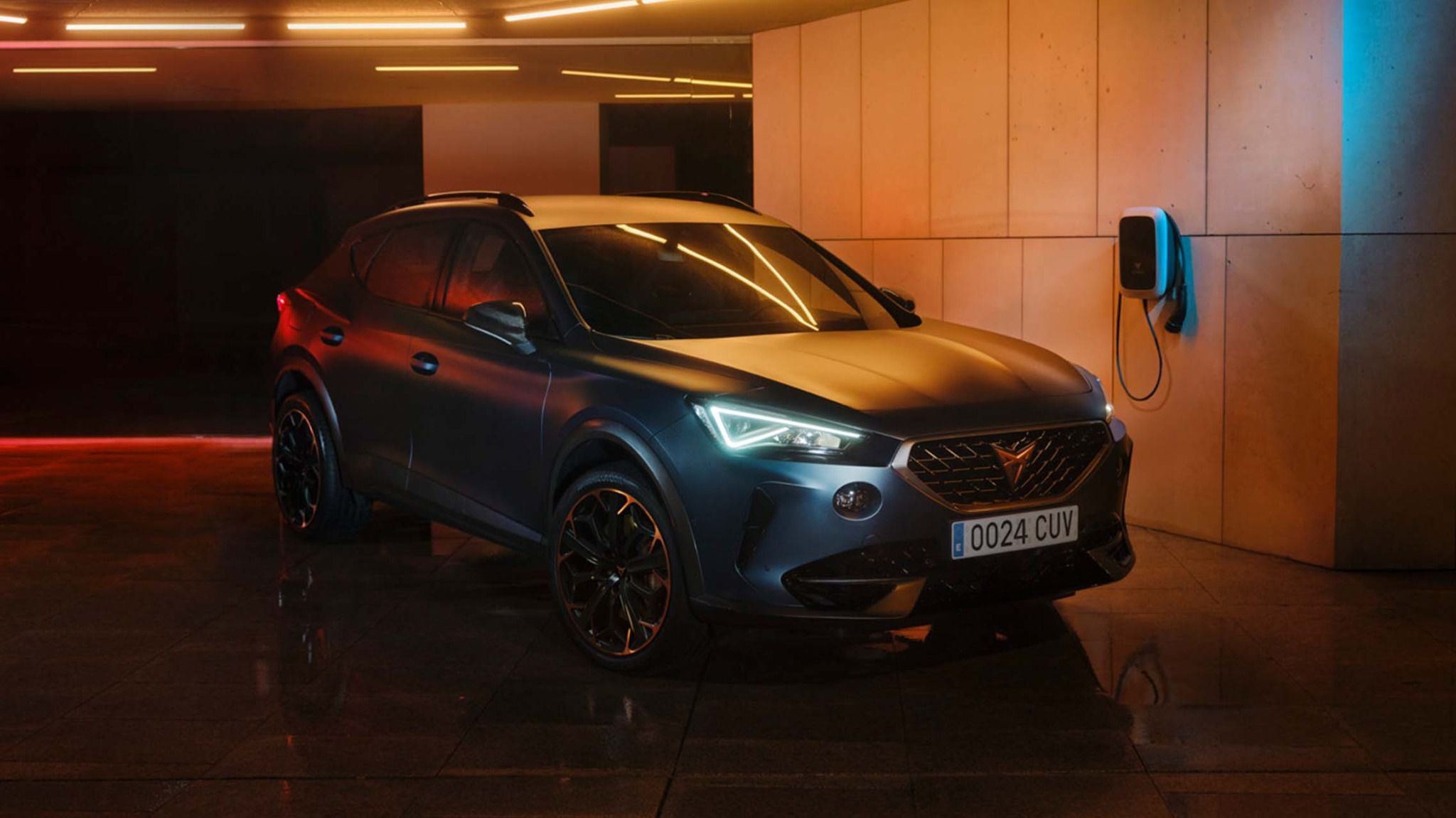 What trim levels are on the CUPRA Formentor?

V1 cars kick off the range but get a healthy amount of standard equipment including 18-inch wheels and that aforementioned 12-inch touchscreen. You also get LED headlights and taillights with dynamic turn signals, alongside rain-sensing wipers and interior ambient lighting.

Move up to V2 and those alloy wheels are increased in size to 19 inches and you also get adaptive cruise control and keyless entry. A rear view camera helps when parking, too.

VZ2-specification cars also get 19-inch alloy wheels, but one of the biggest upgrades here is the inclusion of dynamic chassis control. This allows you to stiffen or soften off the suspension to your liking, which can make a real difference over the UK's broken roads.

Finally, there's VZ3. You now get 19-inch machined alloy wheels with copper and black detailing, alongside dynamic chassis control and high-performance Brembo brakes. This final feature makes a real difference, as they're sharp and responsive.

The CUPRA Formentor can also come as a hybrid. The 245PS model has 32 miles of electric range with a total range of 435 miles.

The electric power and the combustion engine work together to give an amazing driving experience. Using a conventional ply it will take 5 hours to charge while using a wallbox will take 3 hours and 33 minutes. The electric range is perfect for town or city driving with the combination being prefect for long motorway journeys.

What is it? CUPRA has been starting to make a name for itself since splitting apart from Seat to become its own thing back in 2018.

CUPRA has been starting to make a name for itself since splitting apart from Seat to become its own thing back in 2018. It’s largely managed by making go-faster versions of the Spanish firm’s existing models - up until now, that is.

The Formentor - which we’re looking at today - is the first car that CUPRA has had a proper hand in creating from the ground-up, making it a great showcase of what the firm can do. But what does it offer? Let’s find out. ​

​CUPRA’s access to the wider Volkswagen Group means that it’s got a great backing of technology and powertrains to make the most of. The Formentor sits on the MQB Evo platform that underpins the latest Golf, for instance, while the car’s engine has already found favour in cars like the T-Roc R. However, CUPRA has been allowed to show real flair with both the interior and exterior - but we’ll get to those in more detail shortly.

This CUPRA uses a turbocharged 2.0-litre petrol engine with 306bhp and 400Nm of torque. The Formentor is available with a variety of less powerful petrol engines - as well as a plug-in hybrid - though for the minute this 2.0-litre TSI petrol is the most potent version you can get. It’ll only be topped by the limited-edition 2.5-litre-powered version, though this will only be available in left-hand-drive. This engine powers the Formentor from 0-60mph in 4.7 seconds and onwards to a top speed of 155mph. CUPRA also says it’ll return up to 33.2mpg with CO2 emissions of 193g/km.

Though the Formentor’s engine has been used to power performance-orientated cars like the Golf R and Audi S3, its deployment in the CUPRA is a far more laid-back affair; this isn’t a car that screams about its go-faster abilities.

It’s relatively comfortable with a ride that doesn’t sit on the overly firm end of things, while the brakes and steering are effective without being too heavy. It’s even quiet and settled on the motorway, while the ultra-smooth engine delivers a good amount of character - though it’s far from ‘shouty’.

​The Formentor toes the line between crossover and regular hatch. It’s not massively high-riding but doesn’t lie close to the ground like a more conventional car might. It’s a cool-looking thing, that’s for sure, with all manner of styling features dotted across its design.

The rear lights are connected by a solid ‘bar’ and look very futuristic, while the front end’s wide grille and sharp headlights mirror this design. The quad exhaust pipes at the rear give a slight nod to the car’s performance, too. 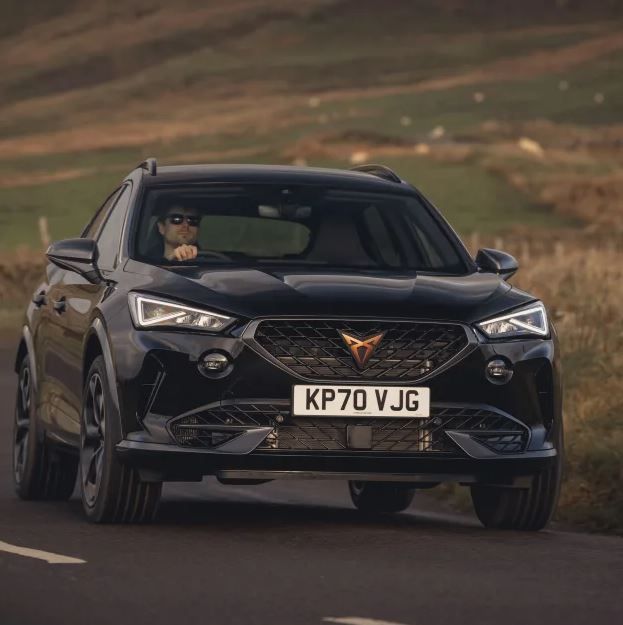 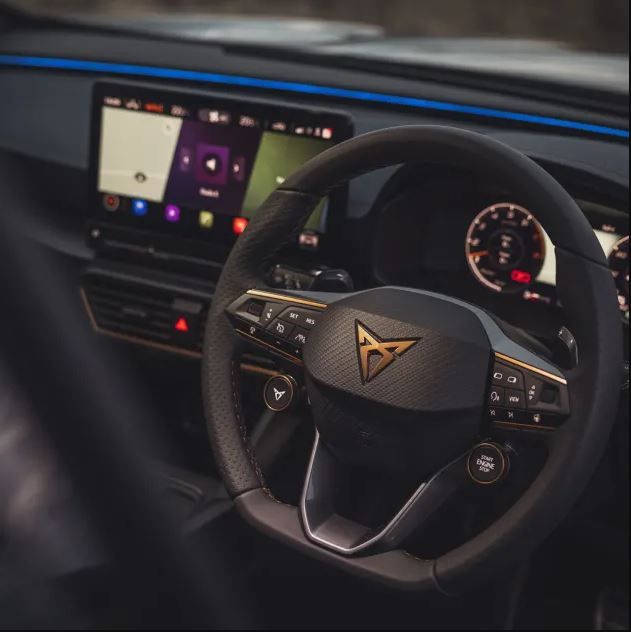 The interior of the Formentor benefits from Volkswagen Group’s latest architecture, which means that it’s knee-deep in the very sharpest tech. However, the key basics have been covered off as well; it’s spacious up front, while there’s a surprising amount of head- and legroom for those sitting in the back. There’s also 420 litres of boot space on offer, though you can increase this by lowering the rear seats flat, too.

Standard equipment for the Formentor is very good, with the car’s huge twelve-inch central screen making up the bulk of the tech offerings. Nearly all of the car’s functions are located here, which does mean it can take a little bit of getting used to. ‘Our’ car was in VZ2 specification, which brought features such as a heated steering wheel and electrically-adjustable driver’s seat as standard. That said, even on entry-level Formentor models the kit levels are good, with highlights including three-zone air conditioning, LED headlights and wireless phone charging - among other features.

CUPRA has really shown that it’s able to do with the new Formentor. It’s a great example of what can happen when it’s allowed to dictate what a car looks, feels and drives like. However, it also benefits from the backing of Volkswagen Group-sourced knowhow. This is a car that really does add some extra sparkle to daily drives and helps to give an idea of what we can look forward to seeing from CUPRA in the future.