When can I order the ID Buzz?

The ID Buzz is now available to order

What is the range of the ID Buzz?

How fast is the ID Buzz?

The top speed of the ID Buzz will be limited to 90mph.

How many seats does the ID Buzz have?

The ID Buzz can seat up to 8 passengers

Will there be an ID Buzz Camper?

Both an ID Buzz and ID Cargo are expected

What trim levels are on the VW ID Buzz?

The expected trim levels are Pure and Pro

The ID. Buzz is the next generation of the iconic camper van.

With a fully automated driving mode and an 8-seated option, family holidays will be a breeze with this new-generation multi-purpose vehicle and provides plenty of comfort and space for even the longest of journeys.

Volkswagen's new campervan is now available to order and is sure to be a worthy buy for road trippers everywhere. With its futuristic looks, its innovative technologies, and a range of different battery options to suit different vehicle purposes and budgets, it is certainly an attractive proposition.

The I.D Buzz will be a highlight model of VW’s EV line-up and will use a selection of batteries of which will offer up to 258 miles of range. There will be single and dual motor variants, with equivalent power outputs of 204PS fed to the wheels. Top speed will be limited to 90mph, but the more powerful model should hit 0-60mph in less than 10 seconds. 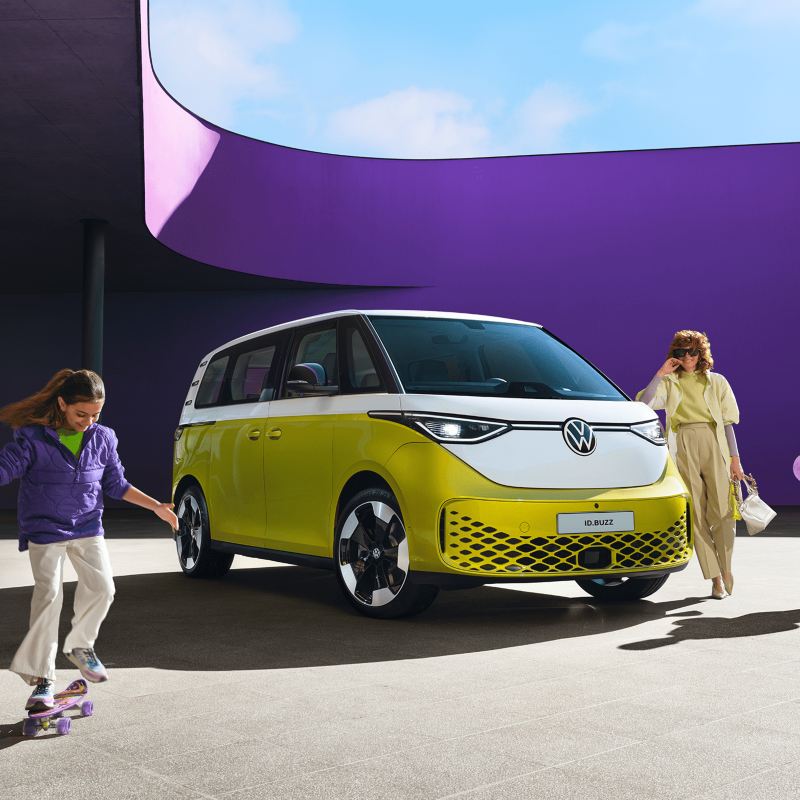 A Better Future For Everyone

With the ID Buzz Volkswagen are moving into the new age with the electric version of their beloved camper van. Moving away from the petrol equivalents of old, the new Volkswagen ID is a van that is kind to the environment, providing a better future for everyone. It looks good too, with space-age looks that still tip a hat to the two-toned yellow and silver colour combinations of their previous generation models.

So far, only disguised pictures of the I.D Buzz have been seen, but they show that it clearly resembles the original prototype shown at the 2017 Detroit Auto Show. There’s also a very distinct family resemblance to the current Transporter in the I.D Buzz’s profile and front end shaping. It’ll initially be available in just the one size – roughly equivalent to the existing short wheelbase version of the Transporter – but expect this to evolve as the I.D Buzz range expands in good time.

If it's space you're after, you can't go wrong with the ID. Buzz. Volkswagen has created an interior design concept that includes plenty of room for luggage, and flexible seating options that can accommodate up to 8 people. With a miasma of glass surrounding you when in the back, it can almost feel like a mobile conservatory, and there is certainly plenty of space to relax or watch movies if you're a passenger.

Spy pictures of the I.D Buzz’s cabin have already emerged showing a similar layout to the I.D 3 and I.D 4 models, but in a bigger and flatter van-sized layout. These include a digital driver’s display, largely buttonless touchscreen dashboard and a central infotainment system, laid out in a logical and easy-to-follow fashion. It will most likely also come with the ID Light tech across the dashboard that lights up in different colours depending on battery charge status, navigation directions or voice activation. In Cargo form it’ll be a panel van with a completely flat load floor thanks to the EV powertrain, while a seven-seat passenger version and an all-singing, all-dancing camper van with a pop-up roof are also expected.

The ID. Buzz is overloaded with extra features that will make your driving experience a whole lot easier.

The big news here is that the I.D Buzz will feature cutting edge tech, but foremost among its innovations will be a full Level 4 autonomous driving system. Volkswagen Group has partnered with American technology giant Argo AI, with the aim of putting a self-driving electric van on the road by 2025 – in theory and capability even if legislation doesn’t fully allow it. The Level 4 autonomous system would need barely any input from the driver, reading the road and responding to incidents on its own. It’s clever stuff, but will probably only be allowed in certain trial cities in the model’s early phase.

Let's consider the AR-head-up display. This innovative augmented reality feature will project directions straight onto the road in front of you. With arrows pointing to exactly where you need to go next on your journey, you need never get lost again. This is perfect for anybody who has ever struggled with directions on a map or who have lost concentration while listening to their sat-nav devices.

The latest Volkswagen ID also comes with intelligent LED eyes' that can communicate with pedestrians and other drivers. Of course, when we say 'eyes,' we are talking about the headlights, and these ground breaking new visual prompts are very helpful to other road users. For example, when you're about to turn a corner, the headlights will point in the direction you are heading, so people will always know what direction you are going in. They can also detect pedestrians and cyclists on the edge of the road, and they will look towards them with subtle light signals to let them know you're there. This is a ground breaking safety feature that must surely become standard one day. 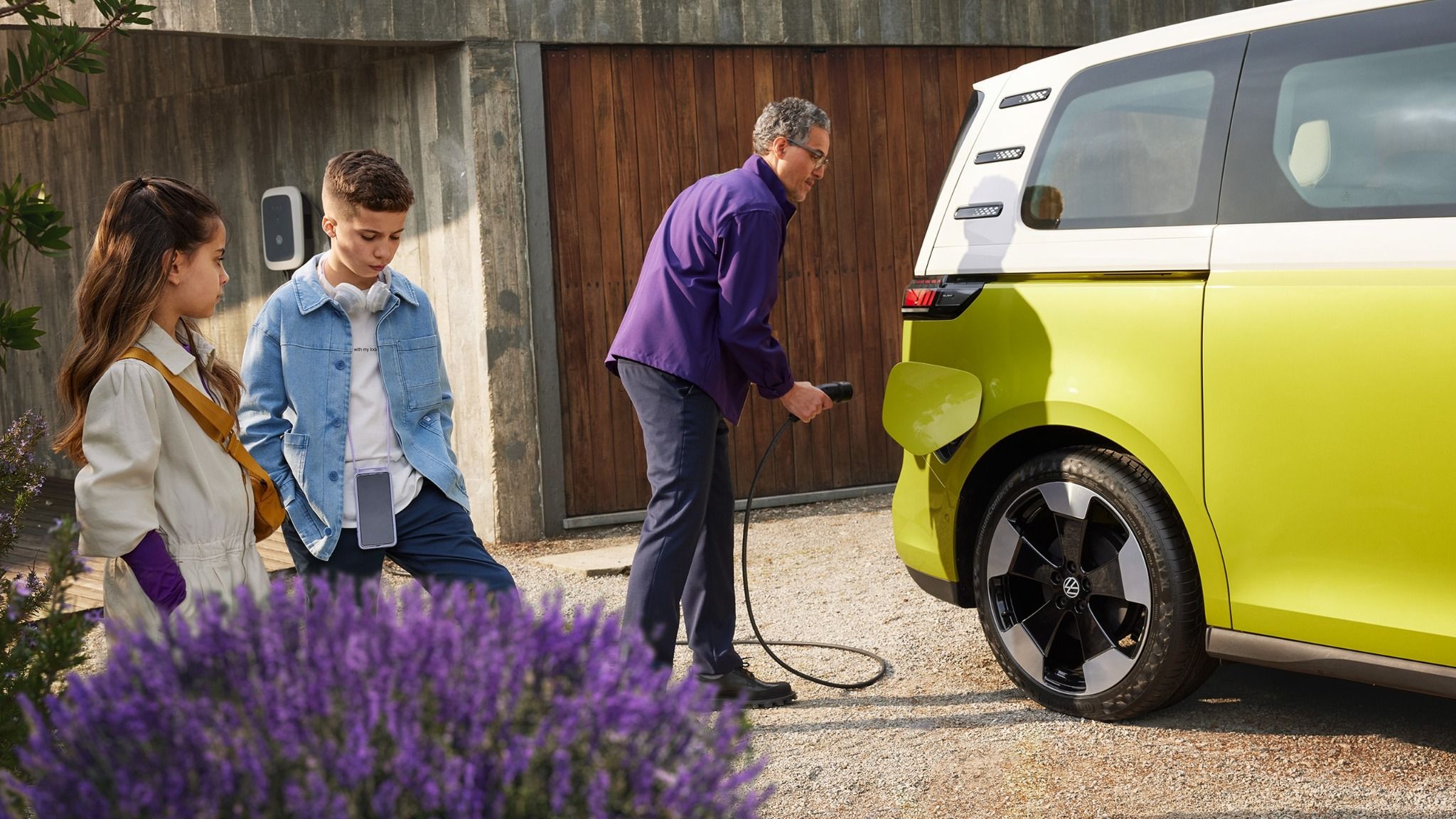 The ID. Buzz even reinvents the wheel, literally. The cockpit has done away with all of the complex buttons and knobs that you would usually find and has transferred all of the necessary functions to the intuitive touchpad on the steering wheel.

This makes the Buzz very easy to drive, as with a simple tap on the wheel, you can get your campervan to do everything it needs to do!This technical powerhouse also utilises voice control. If you're looking for a place to eat or drink, a nearby landmark, or a place to pull over for a comfort stop, you only need to ask.

Other futuristic features are also expected to come as standard with the Volkswagen ID. Buzz, and these include mobile phone access security, facial recognition, and fully-customizable interiors.The ID. Buzz is brimming with big ideas, which is quite fitting with Volkswagen’s plan for a campervan that looks like something out of the future. 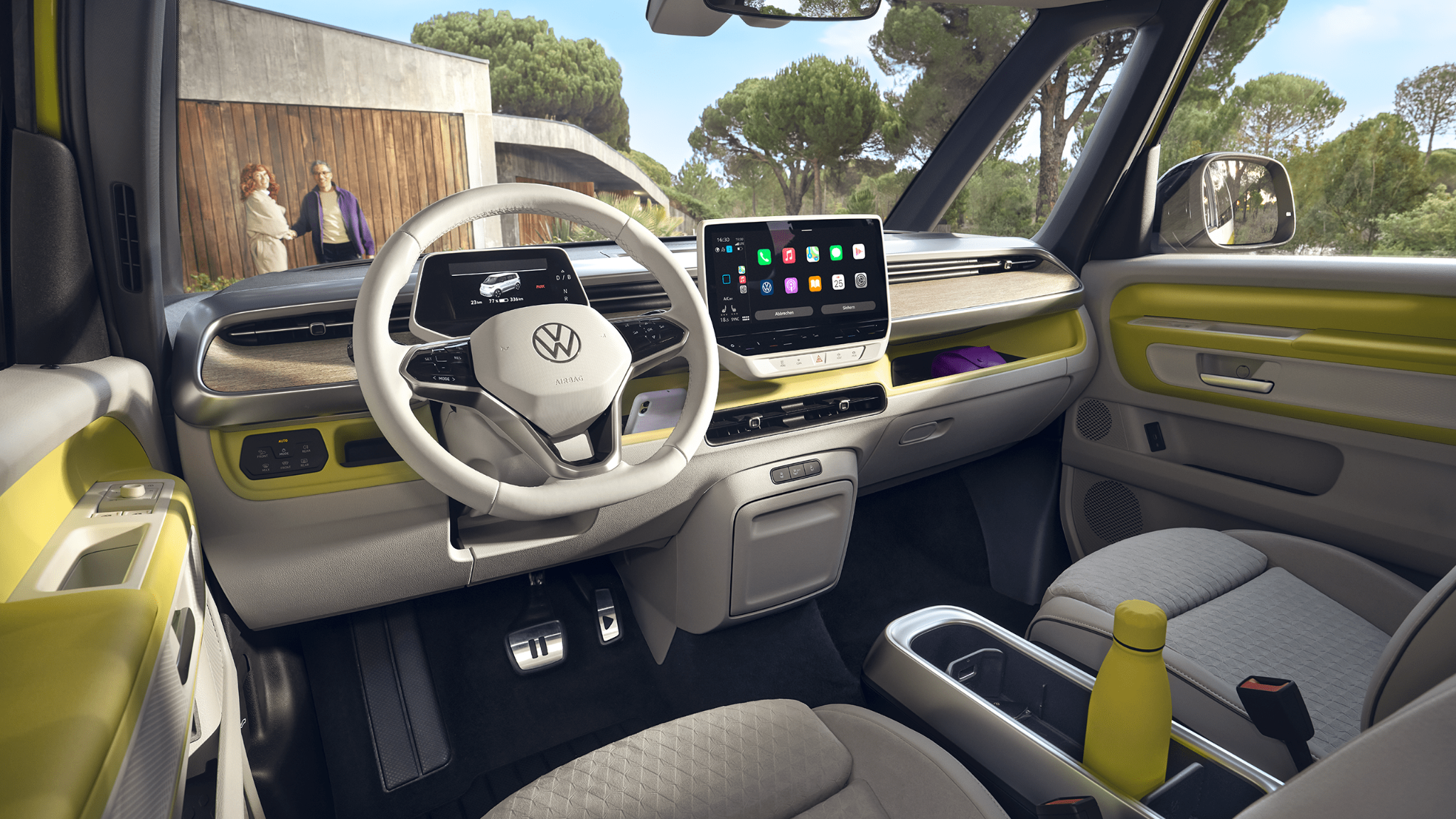 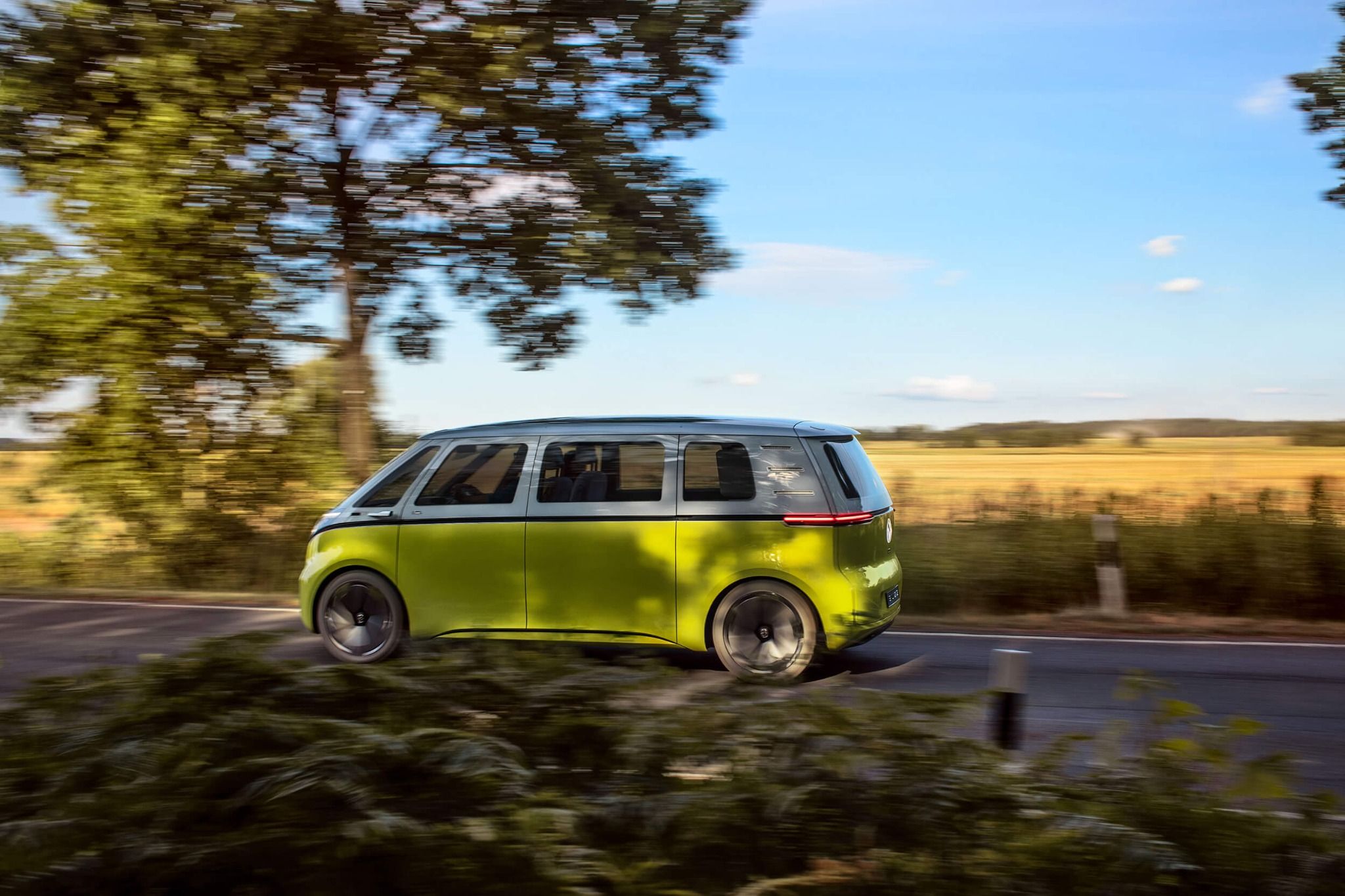 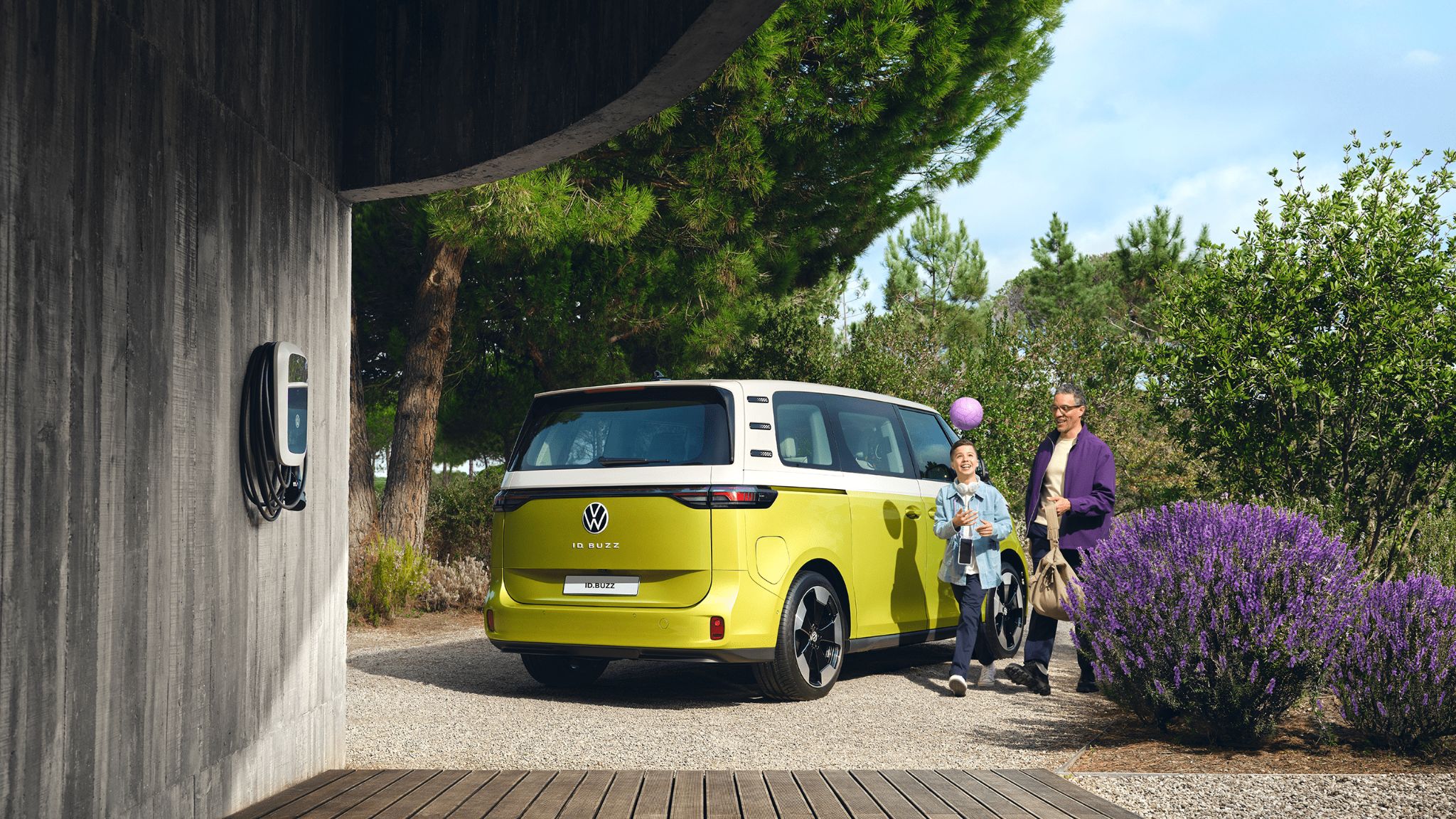 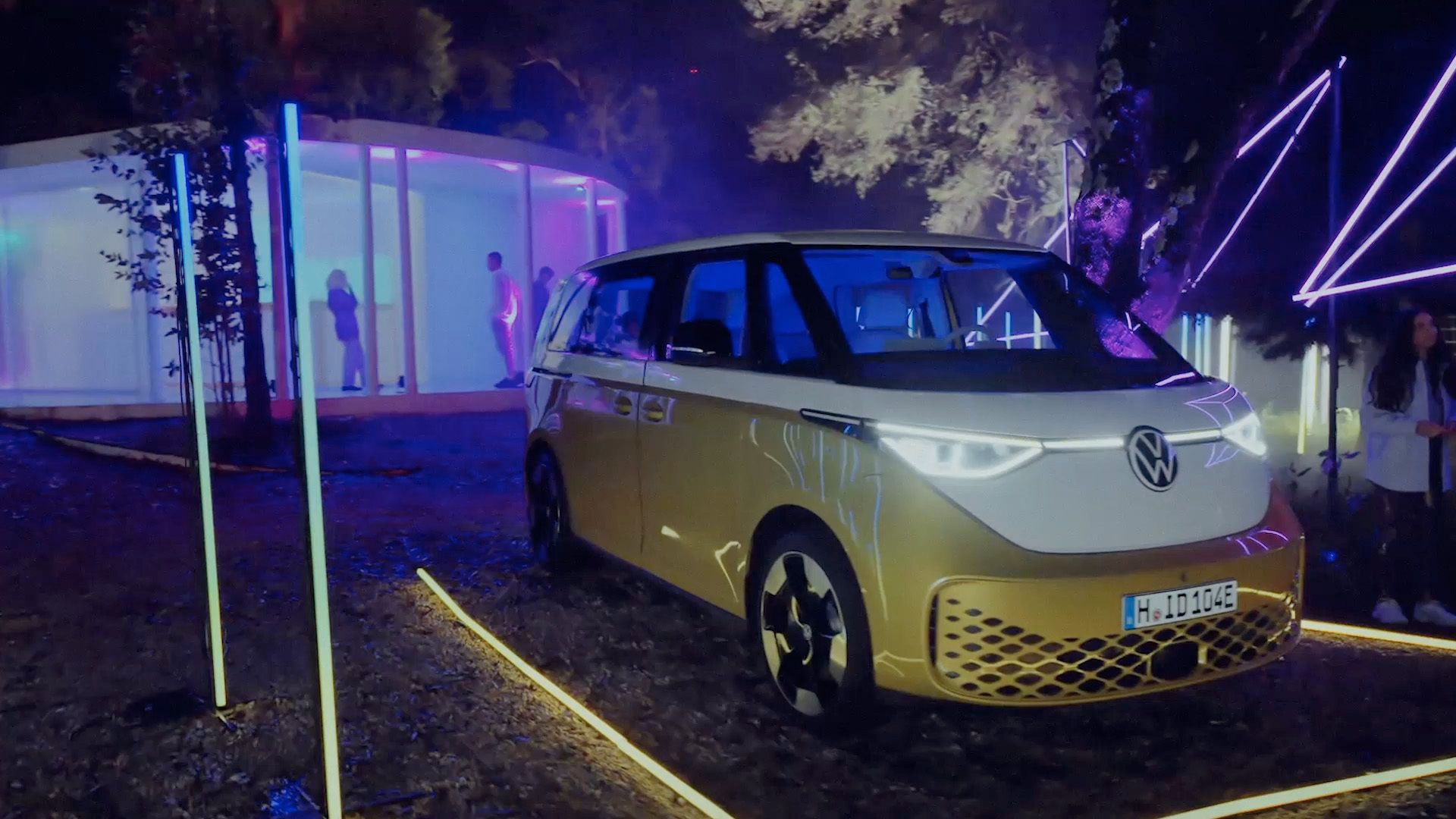 What trim levels are on the VW ID Buzz?