The A5 Cabriolet is currently unavailable.

Make the most of summer with the Audi A5 Cabriolet, the only convertible in the A5 range. As the largest of Audi’s Cabriolets, this luxurious model transforms everyday drives and long journeys into invigorating rides.

At the touch of a button, the fully automatic hood will take you from warm comfort to cool exhilaration while travelling at speeds of up to 31mph. Opt for the S line and Special Edition Plus trim levels which have an acoustic hood for a quieter and cosier drive with the roof up. Whether the hood is up or down, the A5 Cabriolet retains a smart persona with a high-gloss black grille, chrome finishing on the exhausts and optional Xenon headlights. Diesel engine variants have two exhaust pipes on the left while the petrol versions have one on each side. With five seats, the A5 Cabriolet is the most family-friendly convertible in Audi’s collection. All trim levels take comfort seriously and come with a wind deflector and three-zone climate control as standard. Upgrade to the Special Edition Plus for heated seats. An Audi Concert audio system and 10 speakers are also included on all trim levels so you can enjoy listening to your trip playlist even when the hood is down. For driver convenience, there is a central armrest with two integrated 12V power sockets.

The A5 Cabriolet has a generous range of engine choices starting from the 1.8-litre TFSI through to the 3.0-litre TDI quattro. Turbo fuel stratified injection technology is integrated into the petrol versions and Turbo Direct Injection systems are fitted in the diesel, offering greater fuel-efficiency. Stop/Start technology also helps to keep your fuel-consumption to a minimum. As the premium choice, the 3.0-litre TDI quattro will take you from 0-60mph in approximately six seconds and breaks top speeds of 155mph. Opt for the all-wheel drive on the 2.0-litre petrol engine and the 3.0-litre diesel variant for an agile drive in difficult weather conditions. Audi parking systems, light and rain sensors and cruise control take the pressure off the driver. The front seat is fitted with ISOFIX child-seat mounting, so the whole family can enjoy the journey safely. An Electronic Stabilisation Control system helps you to maintain a steady drive no matter what the speed. 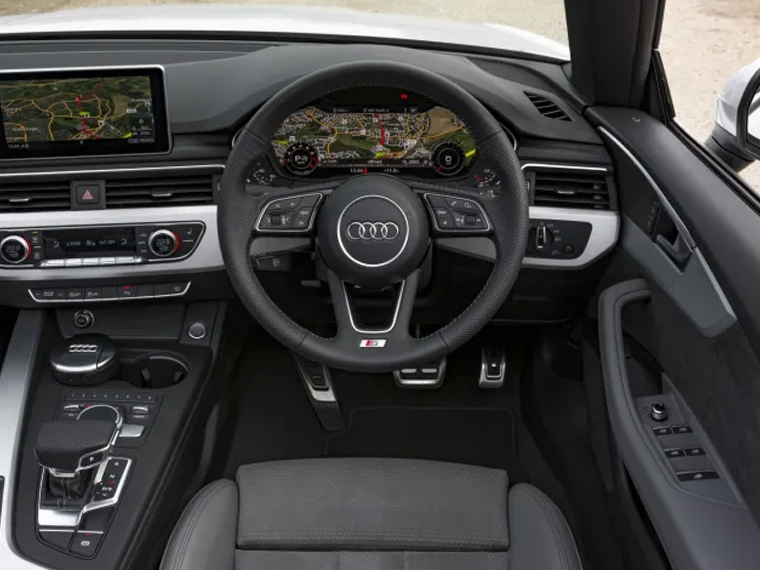 What trim levels are on the Audi A5 Cabriolet?

This is the latest generation of the Audi A5 cabriolet, a model which has always done well in a market dominated by the German brands.

As with any convertible, you must accept there’ll be compromises because it’s not as roomy as the hard top versions; the roof has to go somewhere when it’s folded down, after all.

But, you know that before you buy and what you pay for is the feel-good factor, the fun you get from driving a nice car with the roof down and after that, who cares if there’s a little less room in the back!

Most cabriolets look good and taking the Audi A5 as the starting point gives this car a head start. The current A5 Cabriolet has lovely lines and is wonderfully proportioned, defined by that flowing waistline starting behind the headlights and rising as it moves back over the flanks; with careful sculpting lower down the A5 looks gorgeous.

And that’s before you press the button between the front seats which lowers the roof out of sight into the boot and in topless mode the A5 looks fabulously glamorous.

Some of the Audi range are deliberately styled to adopt a no-frills, techno-look (such as the A8) and can be a bit too right angled for my eyes, but the A5, in any form, looks great, especially this one.

Let’s get the obvious out of the way and say that the rear seats are pretty much a child-only zone. I’m guessing that buyers will be focussing more on the front, which is a very different and totally adult-friendly environment.

The features, instrumentation and touch-screen will be familiar if you’ve driven a different Audi and there’s plenty to play with.

My test car was an S Line version, so, among other things, you get the chance to configure the car settings with the `drive select’ option where you can switch between dynamic, comfort, efficiency, auto or individually set parameters.

If you’re wondering what that last one does, it covers things like the cruise control, volume of the parking aids and distance warning.

One small irritant was that I couldn’t lower the driving seat enough to fully read the Head-Up Display as it projected its information in front of my eyes. I could see the speed, but nothing above that. 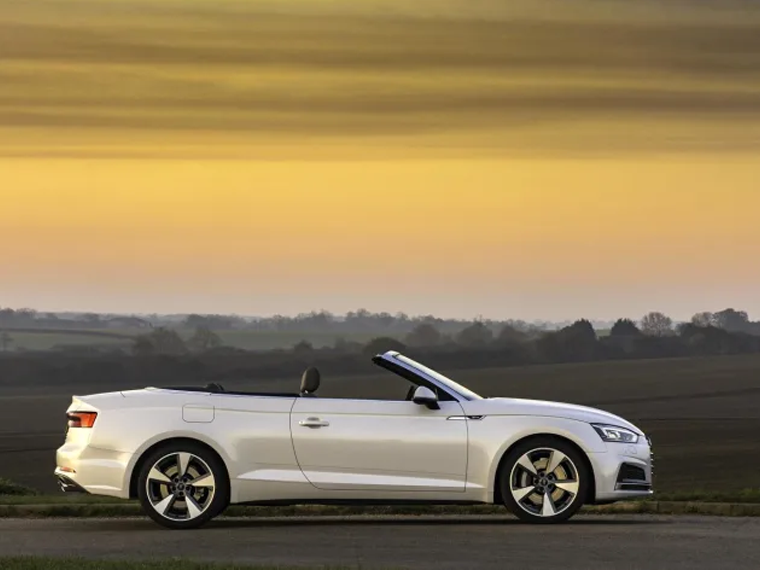 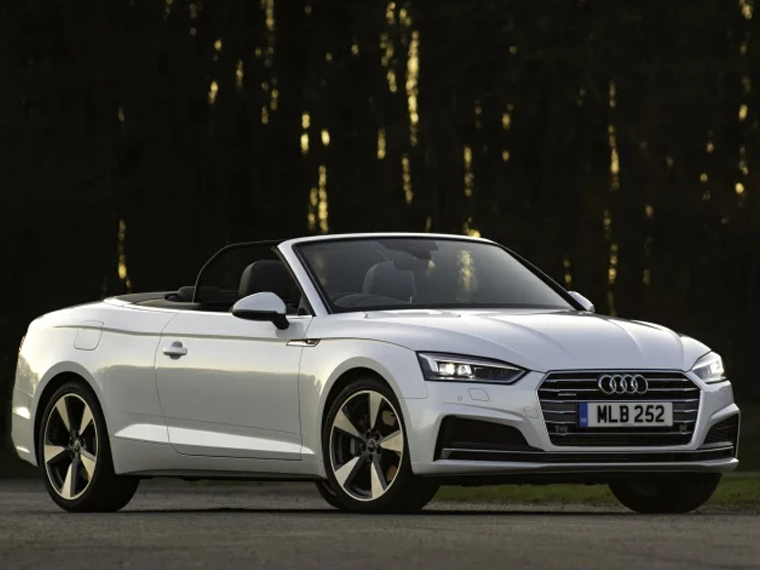 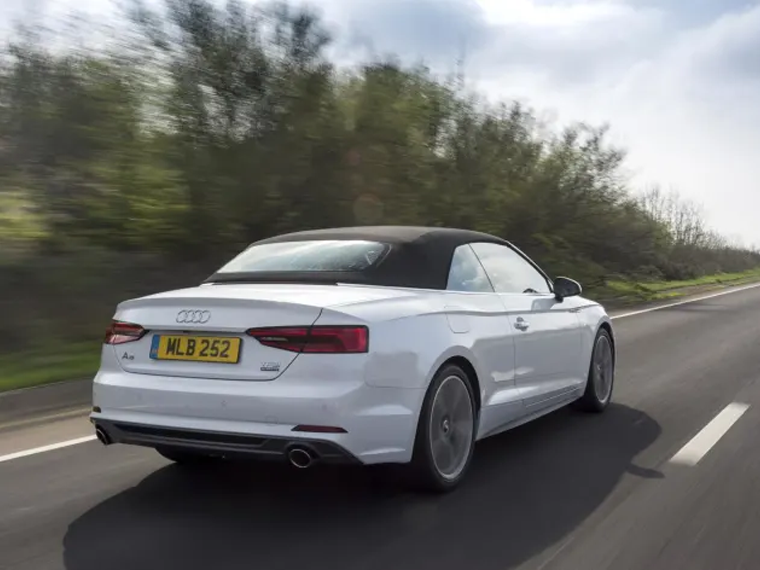 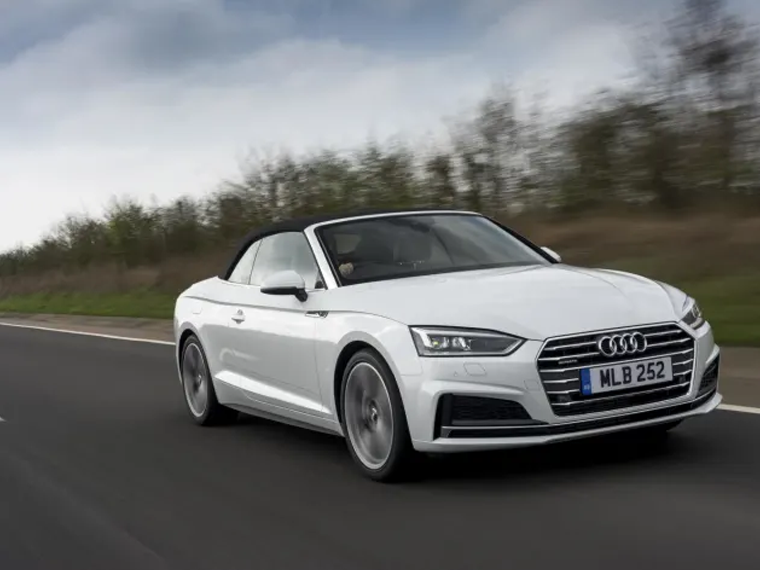 I will be generous and give the A5 the benefit of the doubt, because my test car rode on 19 inch wheels, whereas Audi specify 18 inch as standard on the S Line. I say that because the ride was not great, even allowing for it being a convertible.

It’s actually pretty good over ruts and bumps and the chassis strengthening Audi has added works well to stop it shimmying every time you hit one, but generally the ride fell slightly below par for me and generated a touch more road noise than I would like, especially on a long journey.

Let this be a lesson, big alloys with a mere smear of rubber around them may look good, but they don’t feel good on the road. If you can, try higher profile tyres, before you buy and see what a difference they make.

On the plus side, the hood and window seals are very effective at keeping out wind noise and in that sense it’s a nicely refined car.

There’s plenty of steam from the smooth engine in my test car, the 218 PS version of Audi’s 3.0 litre diesel and with so much torque it oozes along nicely. In top, seventh gear, it needs just 1,500 rpm to cruise at 70 but if you flip it down a couple of cogs (there is a paddle shift behind the steering wheel) and dip into mid rev territory it has effortless acceleration for overtaking.

The steering and handling were OK relative to what I would expect of a car like this but it isn’t a sports car, but who cares, when you press the button next to the seat and with a whirring of electric motors the roof folds back out of sight into the boot, a process which takes less than 20 seconds going up or down.

This is when the Audi A5 Cabriolet comes into its own and where it delivers fully on its promise of putting a rare bit of fun back into your motoring.

In roof down mode the A5 Cab is delightful, with surprisingly little turbulence, for those in the front at least and you forget about any of the niggles. I defy anyone who says they enjoy driving not to have a smile on their face when they drive a car like this.

Which is rather the whole point of it, isn’t it?

This was always going to be a great combination, the Audi A5 and a soft top version. It’s well executed, which you’d expect; very stylish and is an elegant, desirable and comparatively roomy, premium convertible.