The S5 Coupe is currently unavailable.

The Audi S5 Coupé has been given a look that's new, yet familiar. Clearer, yet bolder. Innovative, yet iconic.

Audi has a reputation for building appealing premium cars, but it’s just as well known for its performance models. The RS models might be the supercar-fast versions, but the S models have proved a hugely popular halfway house. That’s especially true of the S5 Coupe, which is the go-faster version of the A5 Coupe – and now that it’s powered by a diesel engine, it makes for a mighty appealing and interesting option.

Audi is one of, if not the segment leader when it comes to interiors. Everything is laid out in a sensible way, it’s easy to get comfortable, and the infotainment systems are easy to operate. This is true of the A5, but in the S5 it’s only amplified further through the use of nappa leather upholstery as standard, contrast stitching and sports seats that hug your shoulders and thighs in the turns. The latest A5 has been given a styling overhaul and, unsurprisingly, this is even more apparent in the S5, which boasts sharp angles surrounding the intakes in the front bumper, an aggressively drooping front bonnet and a sharp bootlid spoiler. The sportiness of the model is most apparent at the rear, thanks also to the lower bumper sporting quad-exit exhaust tips and a chunky diffuser look.

The S5 also gets a wider track and looks more muscular around the wheel arches as a result, while the fact it sits lower on sports suspensions also gives it a more purposeful stance. All that being said, though, it is quite restrained, preferring not to shout about its performance from the outside, making it a more subdued alternative to more extrovert rivals.

The S5 is brimmed full of technology, from entertainment to safety, driver enjoyment to security.

Standard equipment is impressive, including Audi’s Matrix LED technology that not only improves vision at night, it can switch off specific LEDs so as not to blind oncoming vehicles but maintain full beam. Other equipment includes a satellite navigation system, an advanced parking aid, an optional Bang & Olufsen sound system, 360-degree cameras and more. What trim levels are on the Audi S5 Coupé?

Highlights in addition or replacement to S5 include:

Highlights in addition or replacement to Black Edition include:

There were light murmurings of surprise in the car community when Audi revealed its S models would now be diesel-powered, but the reality is it’s a great idea – loads of torque and good economy when you need it.

The S5 uses a turbocharged 3.0-litre diesel V6 engine, while also benefiting from a small electric motor that makes it a mild hybrid system. This makes 342bhp and an astonishing 700Nm altogether, and thanks also to being all-wheel drive, it can go from 0-60mph in just 4.8 seconds. The electric assistance helps improve fuel economy at lower speeds while also assisting the engine under acceleration. 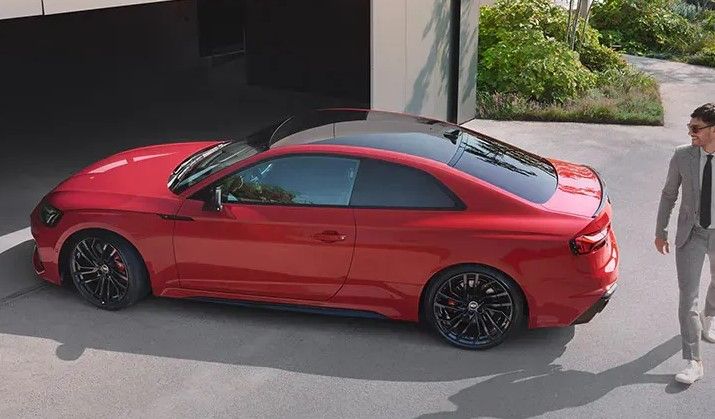 ​The S5 is the most powerful model in the A5 range. Can it live up to the outgoing car’s reputation?

We’ve already looked at the all-new Audi A5, and now we turn to the range-topping S5 model.

The new A5 is a pretty car, and the S5 changes those looks only subtly. As such, you’ll now find the trademark silver wing mirrors fitted, along a resigned grille and front air intakes. Around the back there are four large exhaust pipes, which give a little hint as to the S5’s performance.

Powered by a 3.0-litre turbocharged petrol engine it produces a not-inconsiderable 349bhp and 500Nm of torque. But Audi ‘S’ cars aren’t about just numbers – they need to be discreet as well as fast. The old S5 certainly achieved this, but can the new version do just as well?

Once behind the wheel of the S5, it’s very easy to find a comfortable driving position. The flat-bottomed steering wheel which is a stable in current sports cars actually feels good to use, and sets you up nicely for driving.

There’s no questioning the S5’s power. Acceleration is impressive, with 0-60mph dealt with in just 4.6 seconds, with the eight-speed automatic transmission shifting smoothly. The S5 also benefits from Quattro all-wheel-drive, which means there’s plenty of traction no matter what the conditions.

There is a downside with the S5 – character. By character, we mean lack of, as even upon heavy acceleration the entire car leaves you feeling just a little cold. The four-pipe exhaust which looks almost intimidating at first lacks any true sporting sound, just a ‘noise’. In all, the package keeps you at a distance, which isn’t something you want from a high-powered coupe. The steering, in a similar vein, isn’t bad, but it lacks any feedback to the driver. The S5 is fast, but it doesn’t get the heart racing quite like you’d expect. The new A5 is a pretty car, and the S5 changes those looks only subtly. As such, you’ll now find the trademark silver wing mirrors fitted, along a resigned grille and front air intakes. Around the back there are four large exhaust pipes, which give a little hint as to the S5’s performance.

Inside, it’s business as usual. There are four seats, though the rears won’t be the most comfortable place for taller passengers to sit given the car’s sloping roofline. However, there’s plenty of room up front, while all of the materials used feel of a high quality. Everything is put together exceptionally well, though.

As a coupe, the S5 was never going to be the most spacious. However, the 465-litre boot is of a decent size and offers more than enough room for a weekend’s worth of luggage. As previously mentioned, the rear of the car isn’t the largest, but there’s plenty of width which means it shouldn’t be as uncomfortable as in other coupes.

As far as coupes go, the S5 isn’t as impractical as you’d think. With a good-size boot and a variety of storage areas in the front of cabin, it should give drivers plenty of space.

Prices for the S5 start at £46,015. As standard you get metallic paint and nappa leather upholstery, which is something that rivals cannot offer. Worth picking is the Virtual Cockpit option, although it comes with a £250 premium, it’s a box that really shouldn’t be left unticked as it’s one of the most useful pieces of technology we’ve seen on a car for some time.

You still get satellite navigation, Bluetooth connectivity and DAB radio as standard, which means that there’s a good range of technology fitted.

The S5 is ideal for people who are looking to go fast from point-to-point, but aren’t too worried about razor-sharp dynamics. It’s got good levels of space for a coupe, and there’s enough room for two adults in the back – at a push.

That said, if you’re after a sports car that captures your heart and soul then you may want to look elsewhere. Unfortunately, despite an impressively powerful engine the S5 just doesn’t deliver the firecracker experience that you’d expect. It drives perfectly well, but doesn’t do anything to stir