Smart, compact and adaptable, the Tiguan is an SUV that looks good in any situation. This go-anywhere vehicle features a well-appointed cabin which offers flexible seating and a comfortable ride.More refined, comfortable and connected than ever before – the new Tiguan shows what it can do. Intelligent technology gives it exceptional abilities. As a dynamic SUV, it’s redefining what’s possible.

From the powerful proportions to the dynamic front with its precise lines to the pronounced shoulders, the expressive silhouette of the New Tiguan further emphasises the strengths of this SUV: innovative power, sovereignty and uncompromising functionality.The Tiguan shines bright, thanks to the LED tail light clusters and the optional IQ.LIGHT - LED matrix headlights. The new Tiguan is the fourth Volkswagen to feature the new IQ.LIGHT – LED matrix headlights. Eye-catching, but not dazzling, the LED lights increase the range of vision and improve visibility when driving at night – and in fog.On the Tiguan Elegance and the Tiguan R-Line these come with cornering lights and are complemented with dynamic Light Assist and new taillights. Depending on the driving situation, individual LED segments are specifically switched on or off for the light distribution. This ensures that you have a relaxing drive and that you are not distracting everyone in front of you or the oncoming traffic. Another great feature is the integrated dynamic turn signal that shows the direction with a fluid light movement.With 17-inch alloys as standard for the ‘Tiguan’ level, Life trim specification adds 18-inch Frankfurt alloys, privacy glass and roof rails. Elegance trims feature panoramic roof, and chrome roof rails, whilst R-Line trim features chrome window surrounds, sports suspension and 20” Misano alloy wheels. The new Tiguan boasts a generous interior, a perfect space for forward thinkers. Space is not a problem in this vehicle and with the optional Easy Open function you can use your foot to open the boot hands free. Making large and awkward objects easy to load into the back of the boot and with up to 1,655 litres* of space you are bound to fit everything and anything in.

All versions of the Tiguan come with a new leather multifunction steering wheel, an eight-inch infotainment system, and We Connect and We Connect Plus as standard. Tiguan also receives a new optional Harman/Kardon premium sound system.

With controls right at the drivers fingertips, you can now completely concentrate on the driving at hand. The all-new touch module is multi-use, with access to functions such as the seats, rear window and windscreen heating, and to open the air-conditioning menu.

The Life specification package provides you and passengers with luxurious comfort seats. As well as the features of LED interior lighting in the front and rear and the ambient lighting which creates a cosy atmosphere of the highest quality.

You’ll see your Tiguan in a new light every day, illuminate your vehicle interior in 30 colours. So whether you are driving in a cooler or warmer colour climate, in the brightly-lit city or on a dark road at night, you can create a different atmosphere for you and your passengers no matter what the occasion.

The new Tiguan is packed with great technology, which allows you to smoothly get to where you need to go.

These great features include:

The optional Travel Assist - At the push of a button it provides driving comfort by supporting you in monotonous or tiring driving situations.

The optional Emergency Assist - This feature allows the car to intervene during a medical emergency when it detects that the driver is no longer active, and attempts to reactivate them. If this is unsuccessful, it brings the vehicle to a controlled standstill within the limits of the system and to hopefully prevent any possible accidents.

Due to the cars front assist emergency braking assistant with Pedestrian Monitoring, the New VW Tiguan can help reduce the severity of the accident or, in an ideal situation prevent the completely in the event of a collision threat. It can also detect pedestrians and vehicles on the road and warn the driver in time. If the driver does not react, the system can initiate emergency braking.

The proactive occupant protection system protects you within the limits of the system in critical situations such as imminent collisions. It can detect situations in which there is an increased risk of an accident. It then automatically closes the windows and the panoramic sliding sunroof, and tightens the front seat belts as a precautionary measure. 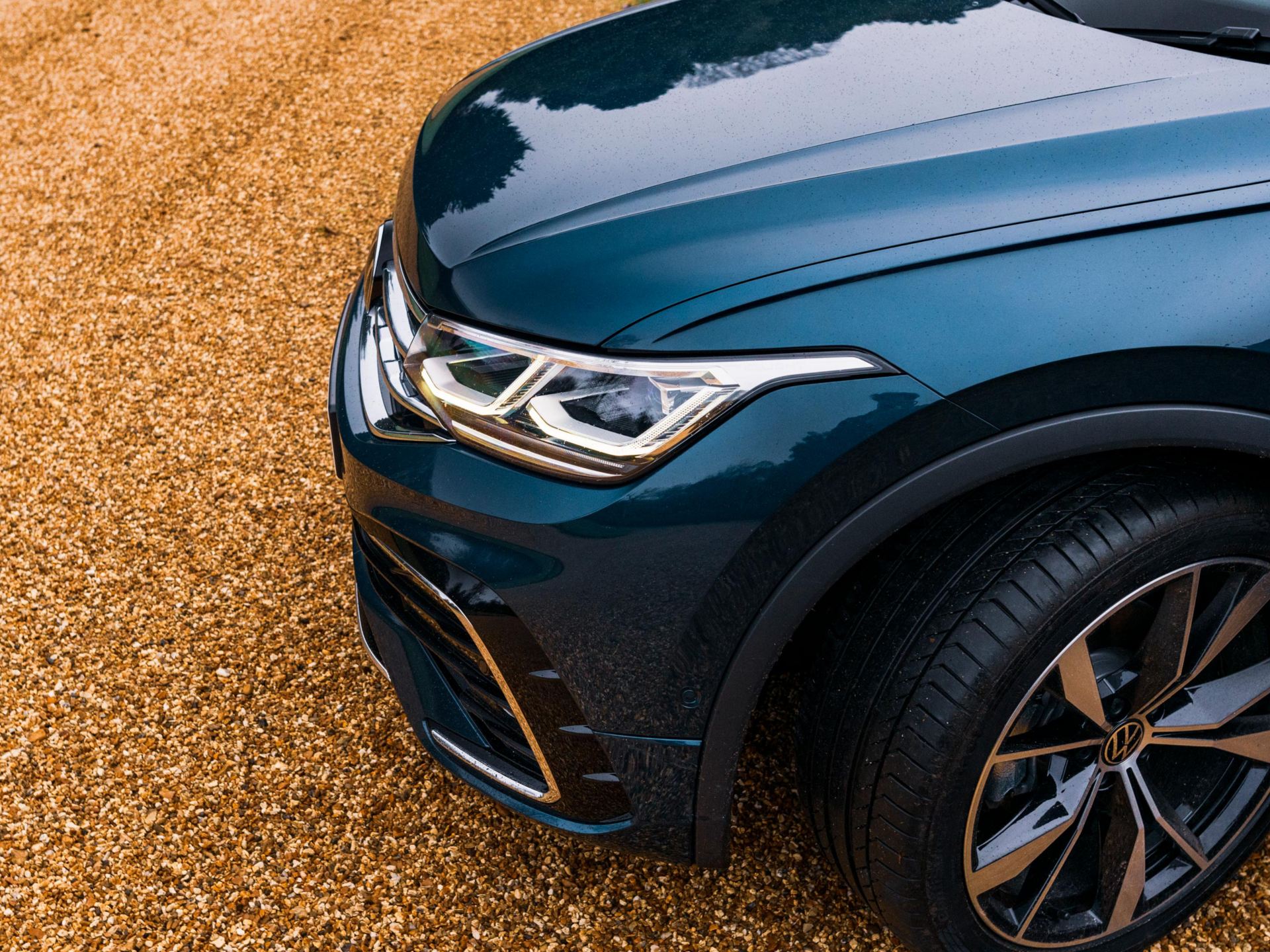 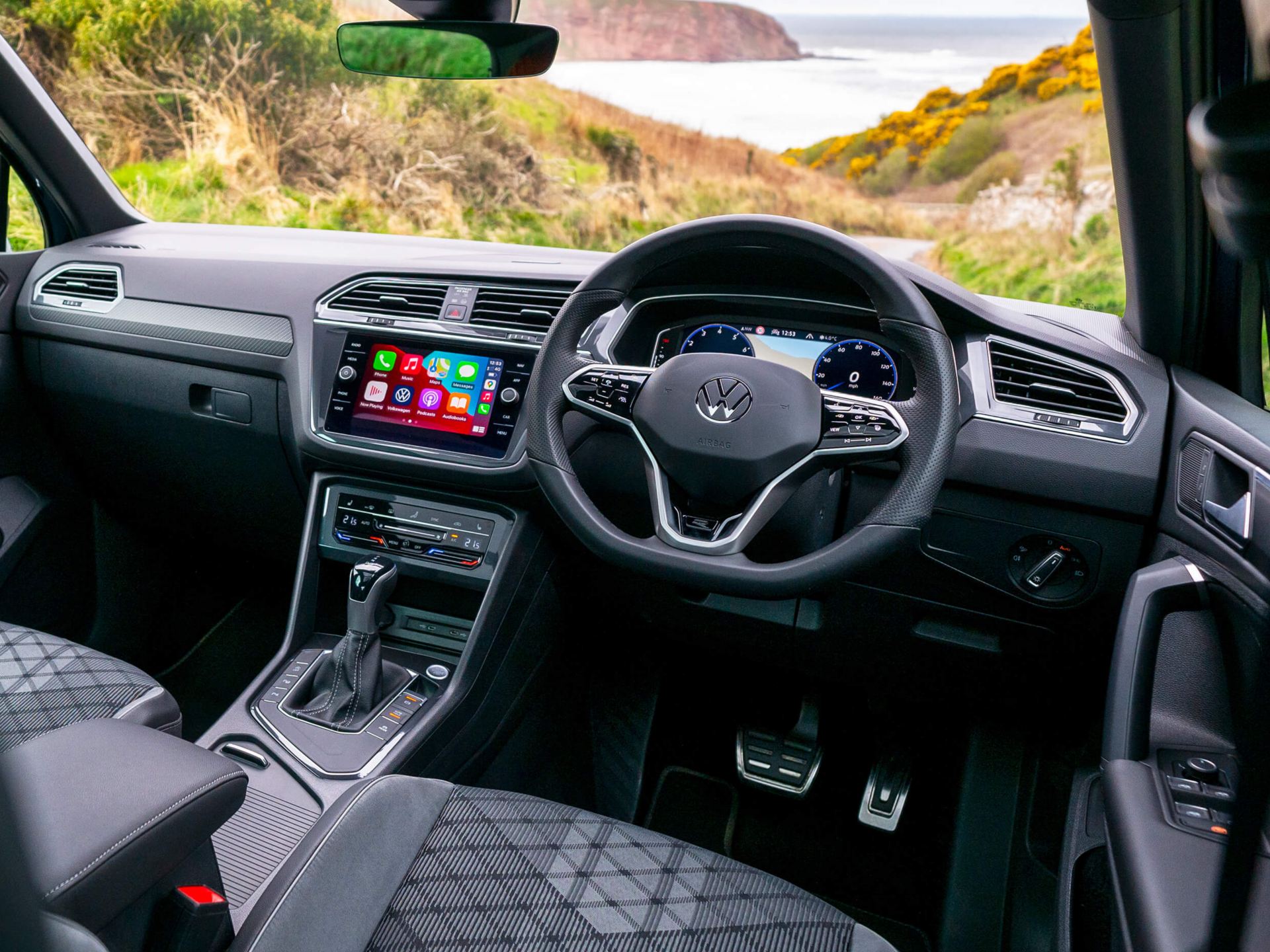 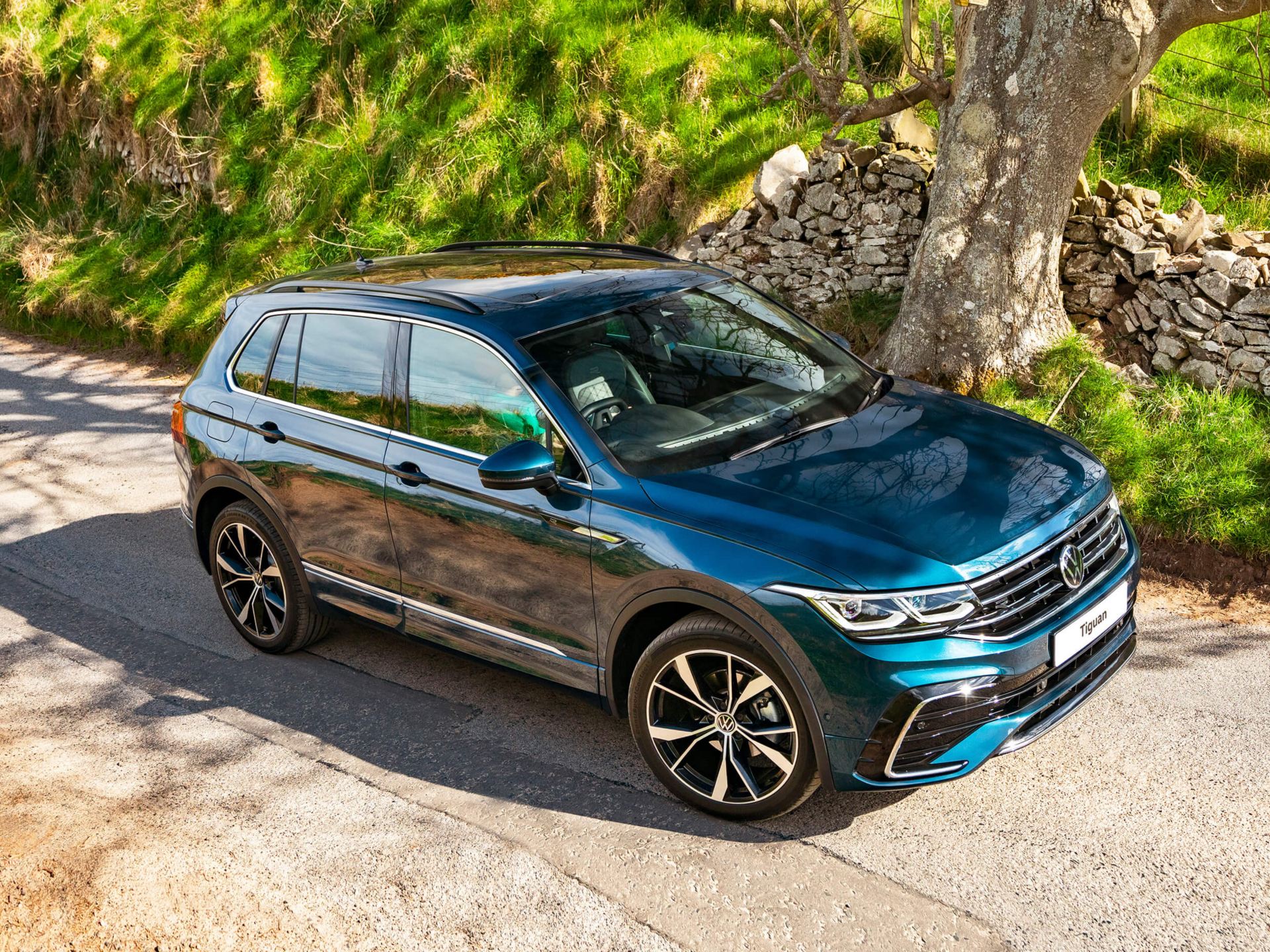 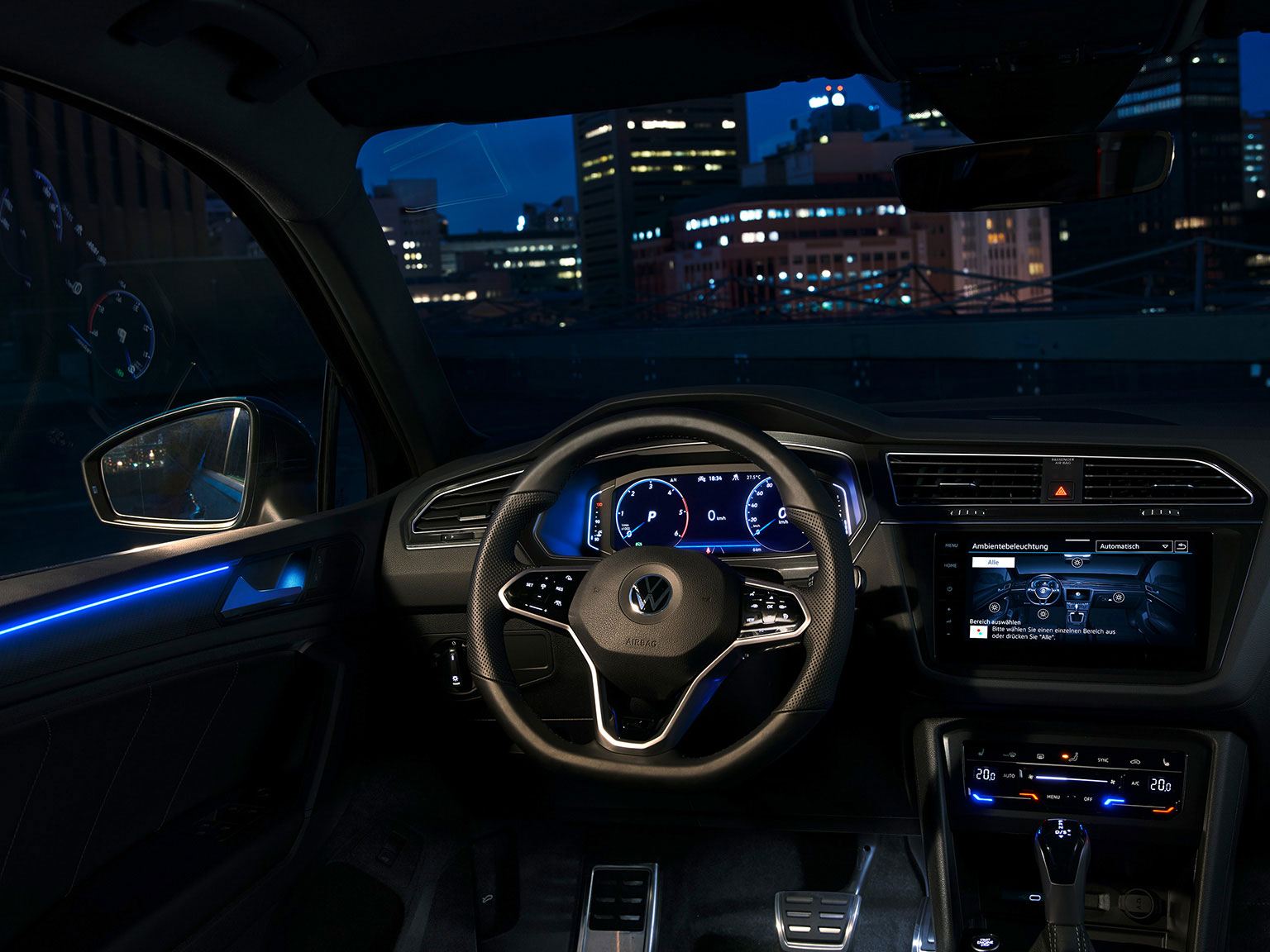 What trim levels are on the Volkswagen Tiguan?

Now in its second-generation – which arrived in 2016 – Volkswagen is back for 2021 with a sharper-looking and more tech-laden model, but does it appeal?

SUVs have proven lucrative for most manufacturers, but not least Volkswagen, which now offers buyers four options in this segment for buyers of all budgets. But it’s the Tiguan that’s proven to be the biggest success, with Volkswagen producing six million of them since its debut back in 2007. Now in its second-generation – which arrived in 2016 – Volkswagen is back for 2021 with a sharper-looking and more tech-laden model, but does it appeal?

Volkswagen hasn’t ripped up the rule book here, and has instead largely adopted the good old phrase ‘if it ain’t broke, don’t fix it’. That said, look closer and you’ll notice a sharper front end, while the interior has been lavished in posher materials and gains new tech. Under the bonnet there are tweaked engine options, while buyers will soon be able to choose a hot ‘R’ model and a plug-in hybrid – both of which are new for the Tiguan.

For the time being before the PHEV arrives, buyers have a choice of petrol and diesel engines for the Tiguan, and here we’re testing a solid all-rounder – Volkswagen’s well-used turbocharged 1.5-litre unit. Producing 148bhp and 250Nm of torque, it’s able to reach 0-60mph in 8.9 seconds and hit a top speed of 126mph. Here it uses a seven-speed DSG automatic transmission and sends power to the front wheels, though four-wheel-drive models are available further up the range.

This petrol isn’t the most efficient choice, with Volkswagen claiming it will return 38.8mpg, with CO2 emissions of 165g/km. If you’re looking to keep running costs down, a diesel model could be a better buy.

The Tiguan is a very easy car to drive, with light steering, good brakes and decent performance, even from our relatively middle-of-the-road petrol option. It’s also quiet and refined and would be a good motorway cruiser.

However, if you’re looking for comfort, it could be worth going for a lower trim level, as the 20-inch alloy wheels on our R-Line test car lead to a rather brittle ride, and let down an otherwise pleasant driving experience. 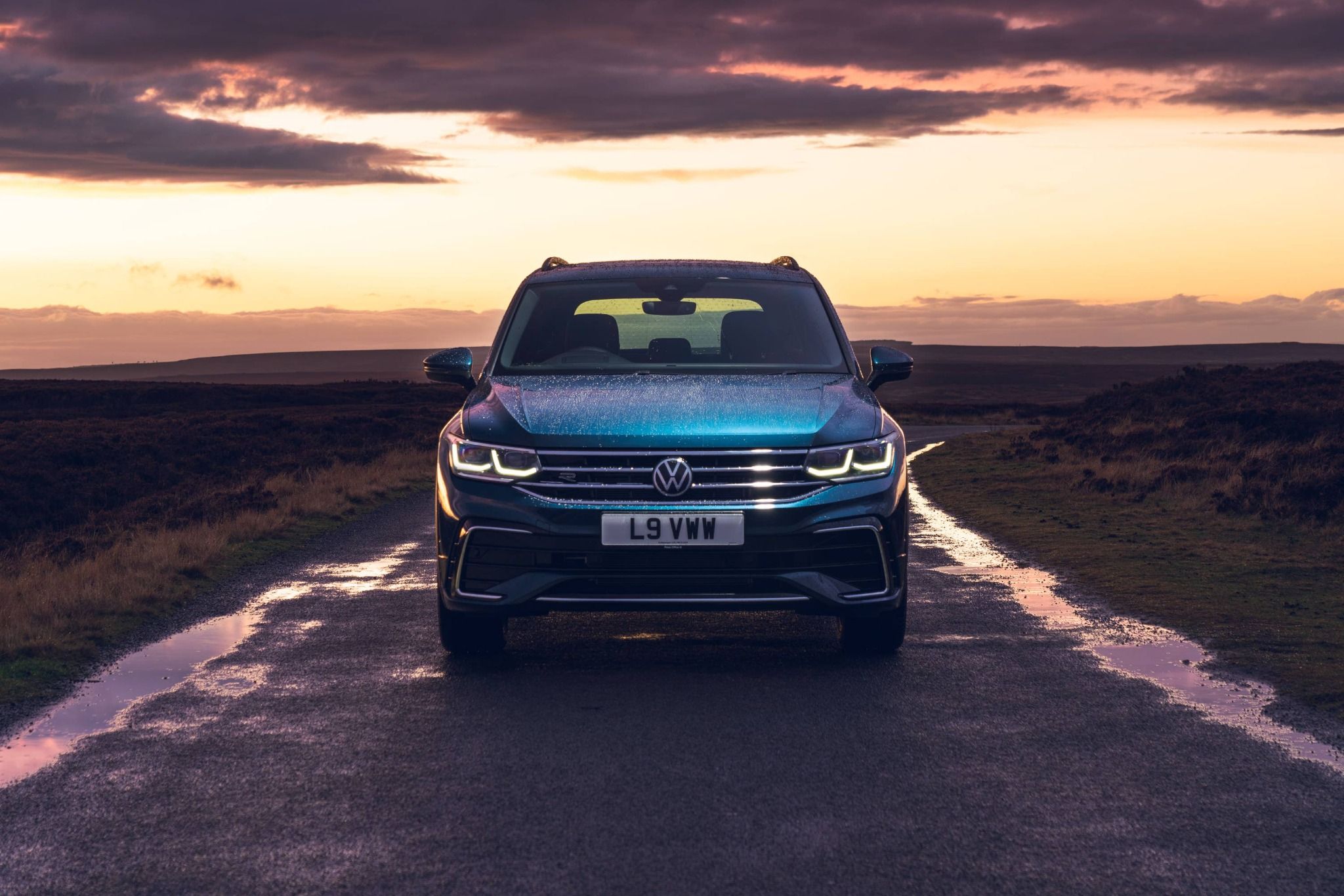 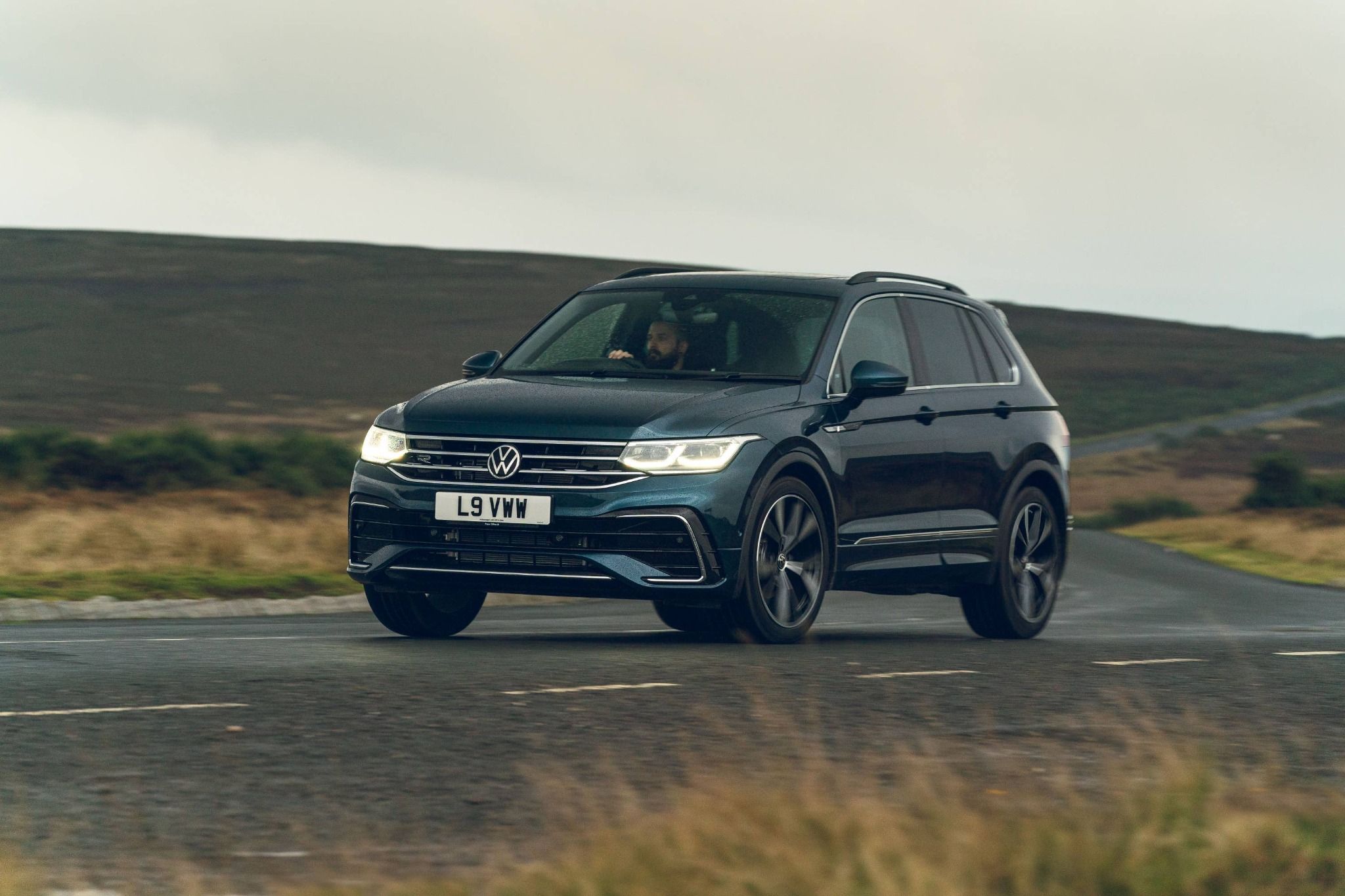 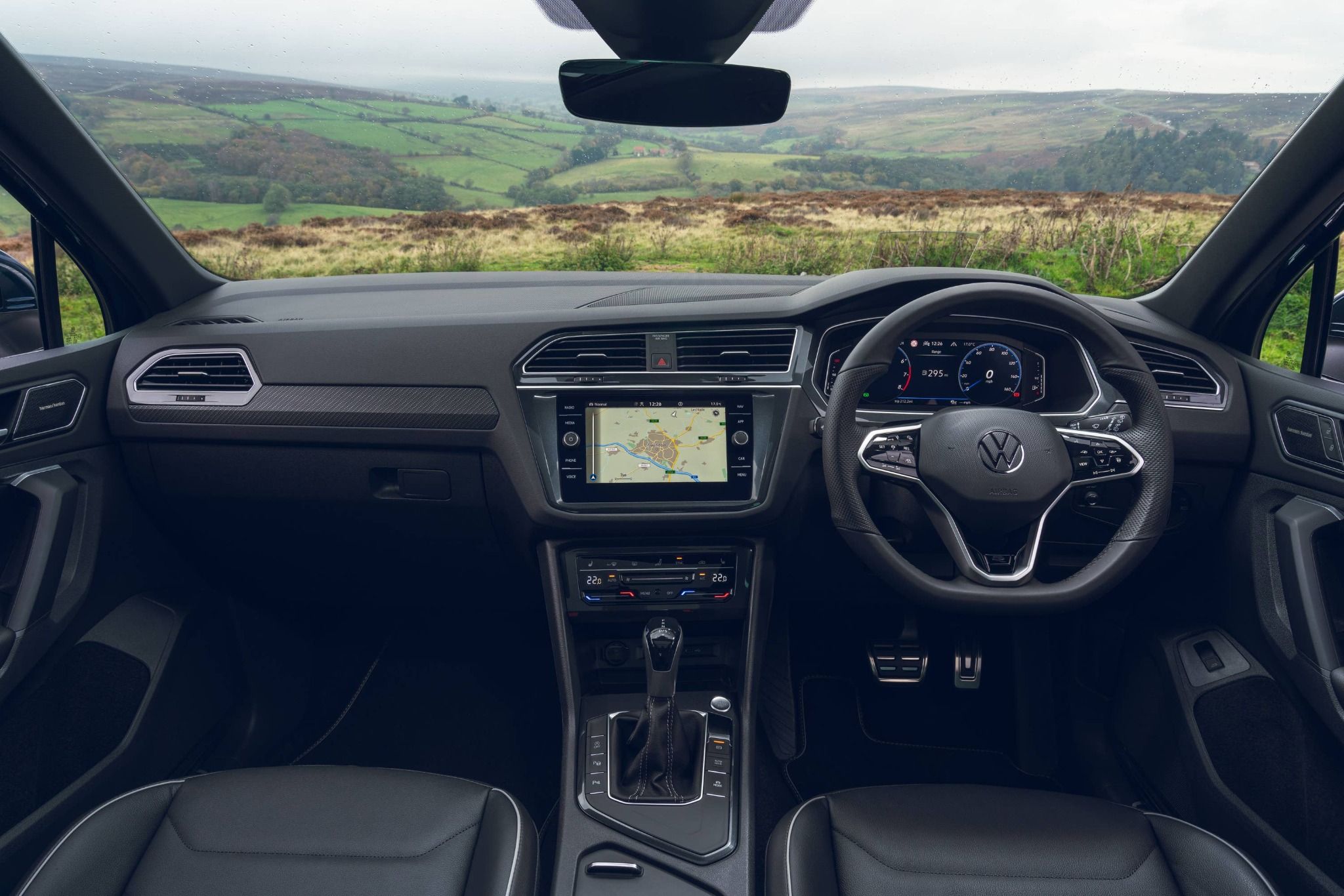 Volkswagen has kept things relatively simple with the design changes on the Tiguan. Parked next to a pre-facelift model, you’ll notice a more striking grille, intricate LED headlights and redesigned bumpers, but changes are relatively small in this respect. That said, it gains cues from Volkswagen’s flagship Touareg SUV, which certainly allows for a more upmarket look. ​

While the latest Volkswagens – such as the Golf – adopt a very digitised cabin, the Tiguan is more traditional, and arguably better for it. You still get a large touchscreen and electric climate settings, but they’re easier to operate thanks to traditional switches.

It also remains a very spacious choice, with plenty of rear seat space for both adults and children, while you also get sliding rear seats that come in handy if you need to expand the boot space further. That said, even in its standard guise it remains impressively roomy with a 520-litre boot.

Further up the range are the pricier Elegance and R-LIne options, which are priced from £32,430 and £32,730 respectively. Elegance brings 19-inch alloy wheels, Matrix LED interior lights, heated front seats and a panoramic sunroof, while R-Line plays it sportier with its large 20-inch alloy wheels, sporty styling kit and part Alcantara seats.

The latest Tiguan might look sharper inside and outside than before, but it’s lost none of its practicality and quality of before, and it remains an especially appealing family SUV.

Though while the R-Line might look the part with its big wheels and bodykit, a lower spec with smaller alloys could offer a more comfortable ride, and also save you money in the process.

How Can We Help?