The high quality interior with a stylish trim, soft touch dashboard and equipment charge your devices even in the back with the ability of USB-C interface.

Those who have recently experienced any of the cabins found in current Volkswagen models will find themselves instantly at home in the Taigo. The seating position is upright, with a virtual cockpit display ahead of the driver combined with a large central screen. Different to the setup in the most recent Golf are the heating and ventilation controls, which are given physical buttons in the Taigo as opposed to being located within the touchscreen. 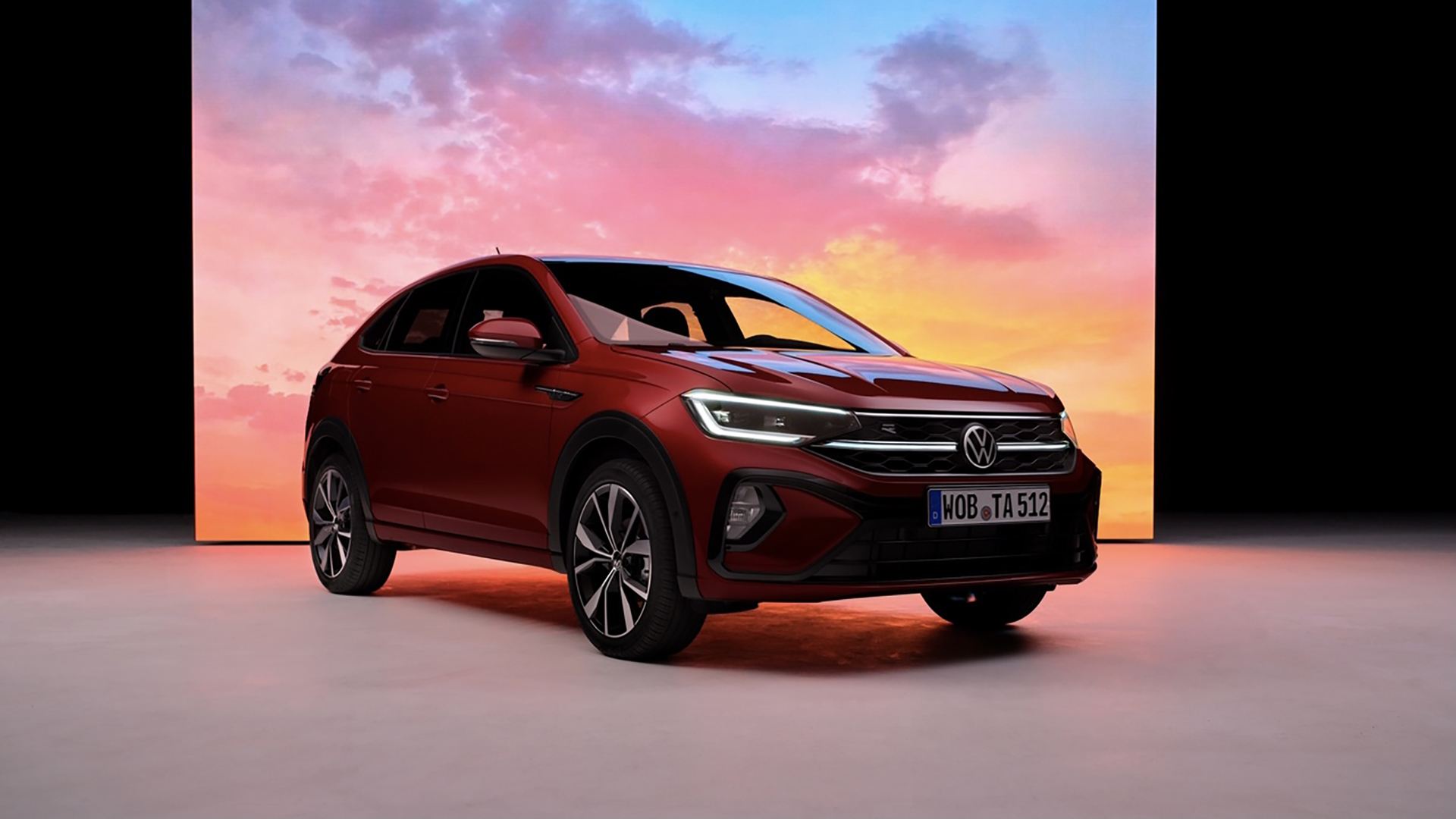 The Taigo borrows much of its design from other SUVs in Volkswagen’s range. The rear of the car, with its full-width black section, looks particularly close to that fitted to the T-Cross, the next-largest SUV in the range. Up front, there’s a wide chrome grille and distinctive LED daytime running lights.

As we’ve already touched upon, the Taigo features a screen-heavy cabin, with displays measuring up to 9.2 inches. The virtual cockpit display ahead of the driver can be configured to show a variety of different readouts, including satellite navigation and media. In the middle, it’s likely that most cars will come with Apple CarPlay to ensure quick and easy integration of the driver’s smartphone.

Another fantastic feature to come as standard on the VW Taigo is wireless charging. Simply place your smartphone in the front storage compartment, where it starts charging instantly. 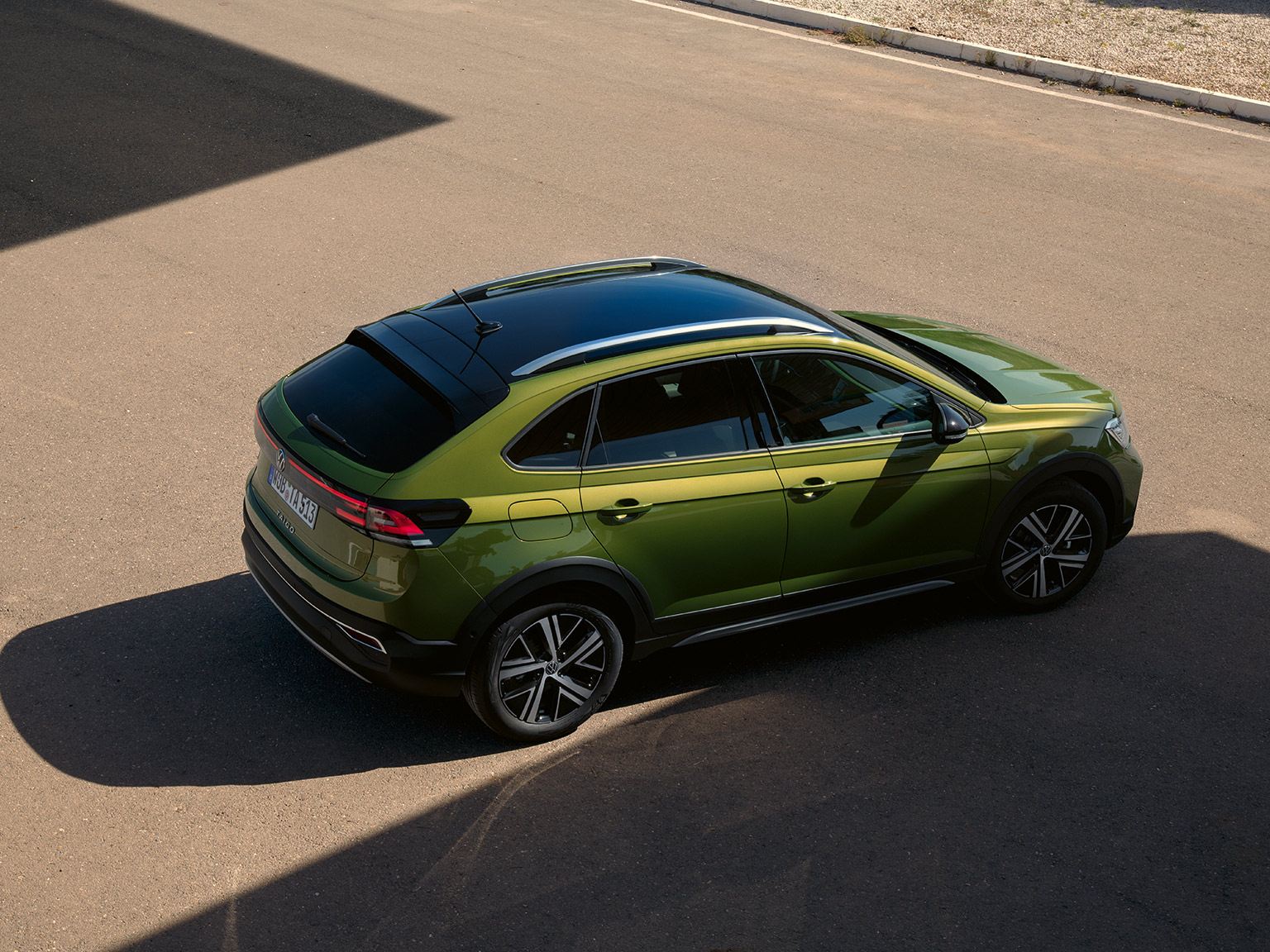 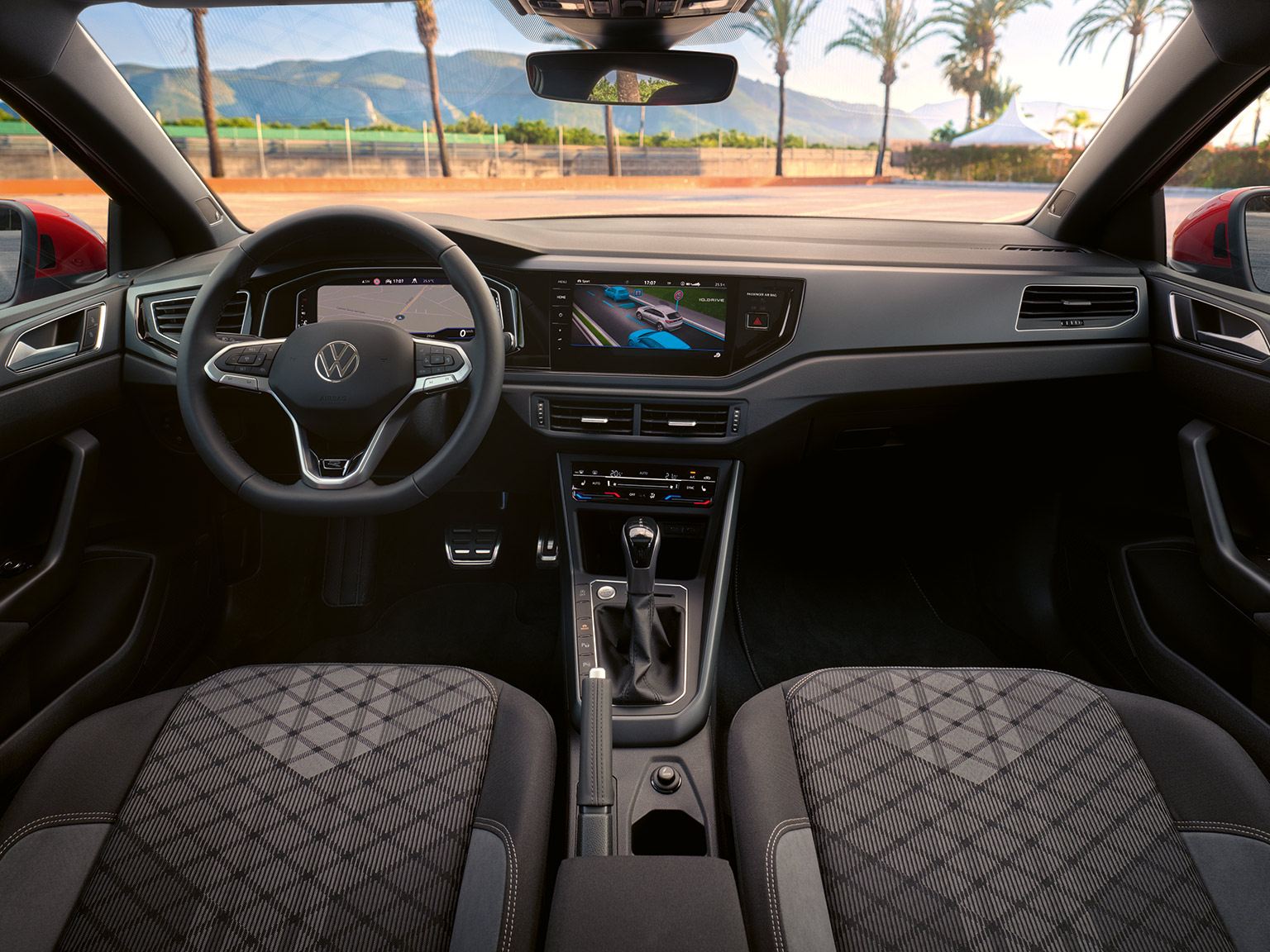 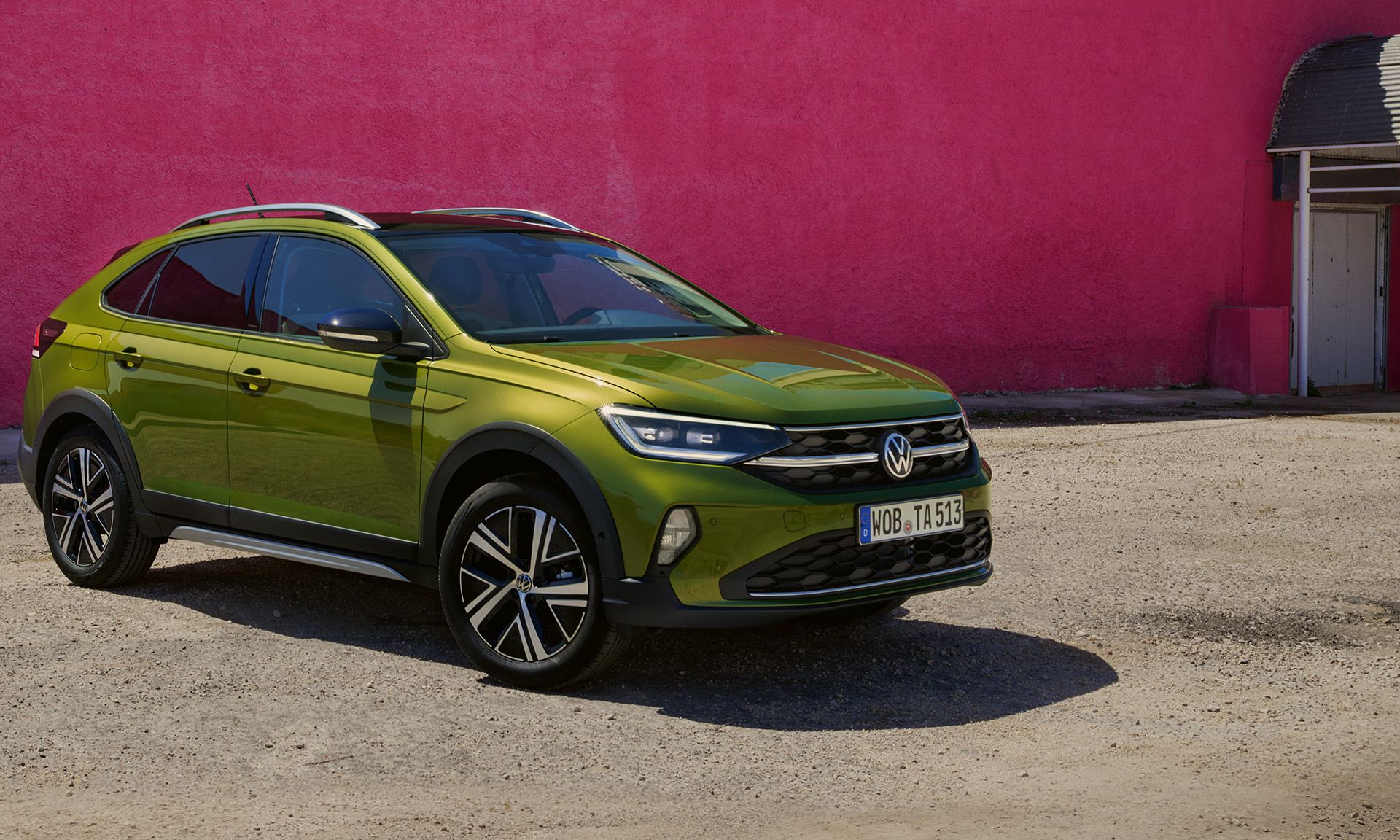 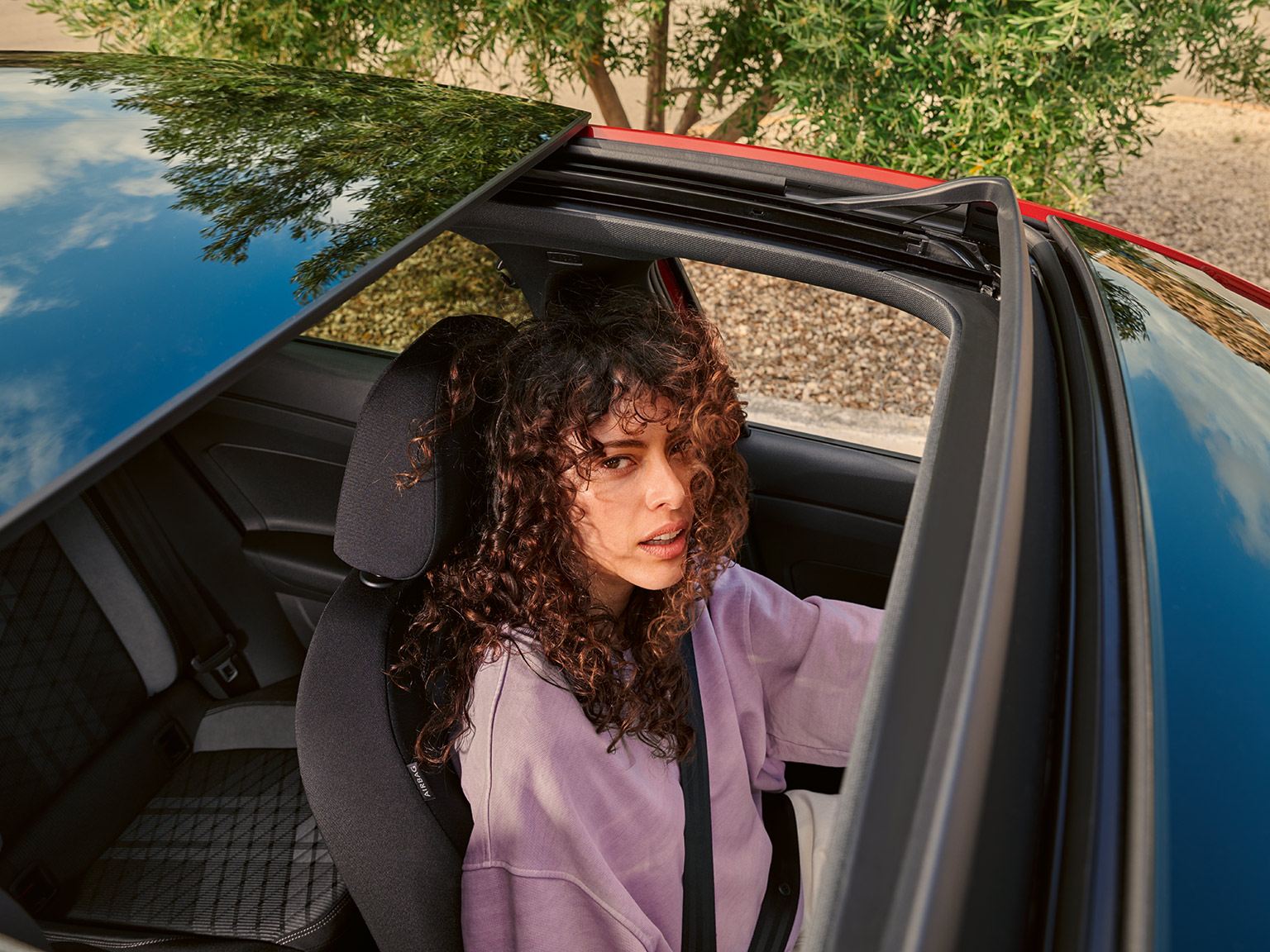 What trim levels are on the VW Taigo?

Review of the Volkswagen Taigo

The Taigo is the latest addition to the range, acting as a new entry-point to Volkswagen’s line-up of SUVs

Volkswagen is taking great strides to expand its SUV line-up, ensuring that buyers in this ever-popular segment always have something new and fresh to take a look at. The Taigo is the latest addition to the range, acting as a new entry-point to Volkswagen’s line-up of SUVs despite being a size larger than the T-Cross. It’s also Volkswagen’s first SUV to debut a coupe-style design - something we’ve seen used on a variety of other cars made by different manufacturers.

But what does this new car actually offer and is it worth considering? We’ve been finding out.

Though the Taigo might be a new car for European drivers, it’s actually based on a car that has been on sale already - the Brazil-built and -designed Nivvus. However, more important for buyers here is that the Taigo sits upon the same MQB A0 platform that you’ll find underpinning cars like the Polo and T-Cross - so it’s very much on a well-tested formula. However, the Taigo is 15cm longer than the T-Cross, so it does bring a slight space advantage.

The Taigo also benefits from some of the latest tech, including Matrix LED headlights and digital dials.

As you might expect, the engines you get in the Taigo are pretty similar to those you’ll find in cars like the T-Cross. Things kick off with a 1.0-litre turbocharged petrol engine with either 94 or 108bhp, with the latter slated to be the most popular. Then, there’s a more powerful 1.5-litre engine that dries 148bhp to the front wheels via a seven-speed DSG automatic gearbox.

Though some of its rivals might focus more on sporty driving, the Taigo is there for those motorists who want something a little more comfortable. Even our sporty R-Line car, which sits on the largest alloy wheels available in the Taigo line-up, rode well and managed to deal with the worst of what the UK’s roads had to offer. The car’s body roll is also well managed, meaning you can corner with confidence.

You might think that the heavily raked roofline would result in poor rearward visibility, but thankfully there’s a decent sight line out of the back. Our only real criticism is directed towards the large wing mirrors; they generate quite a lot of noise, particularly at motorway speeds. 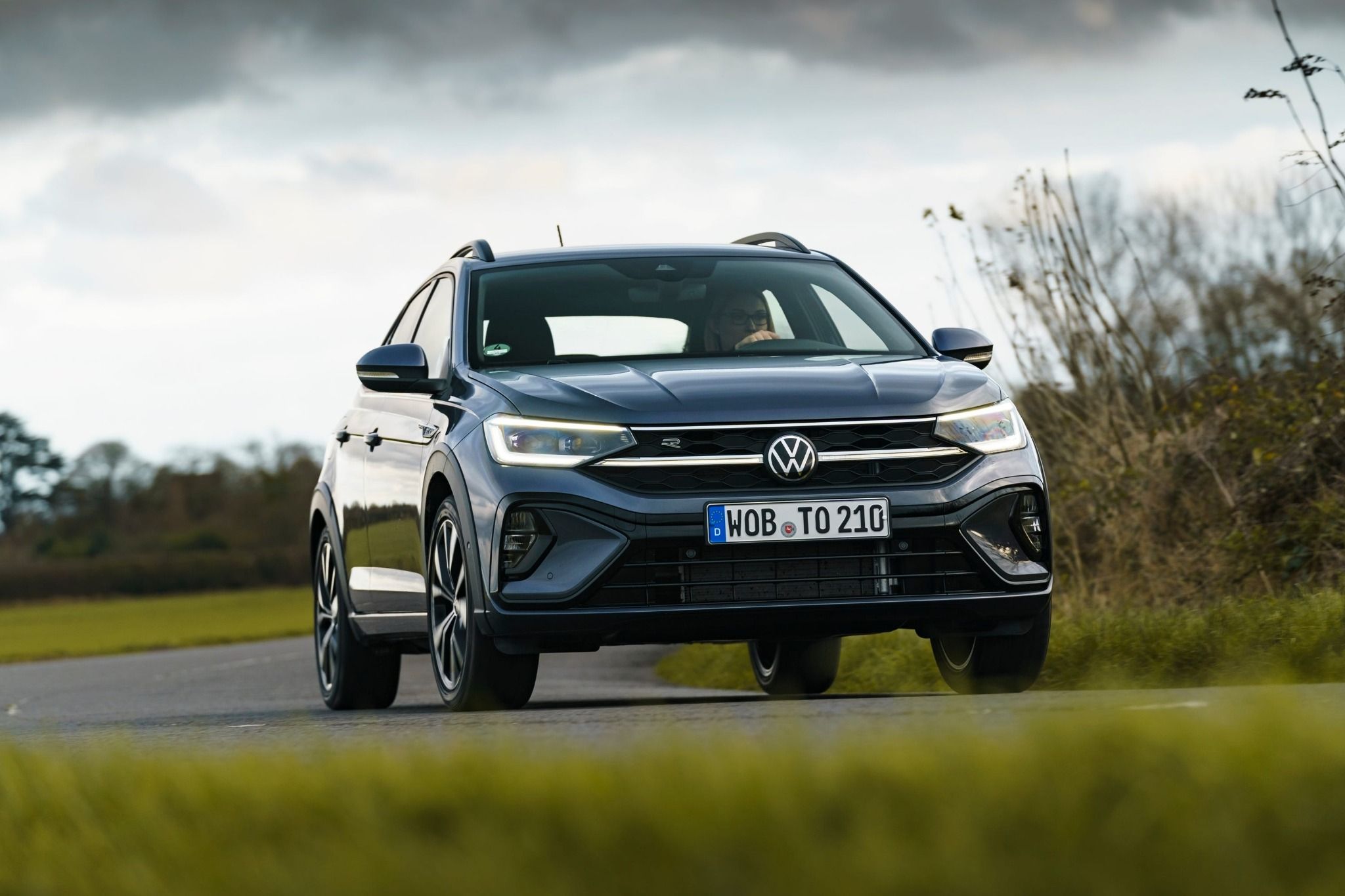 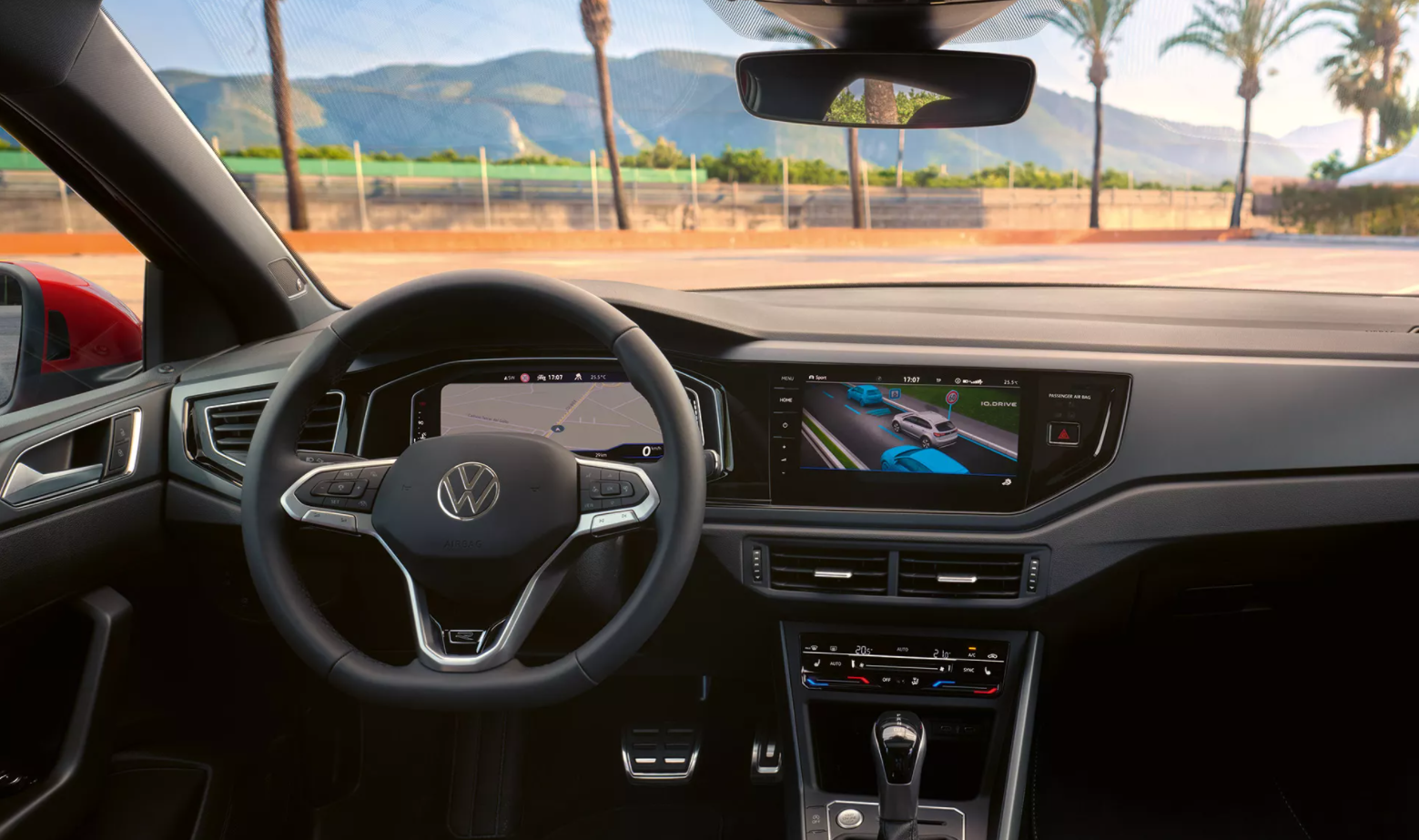 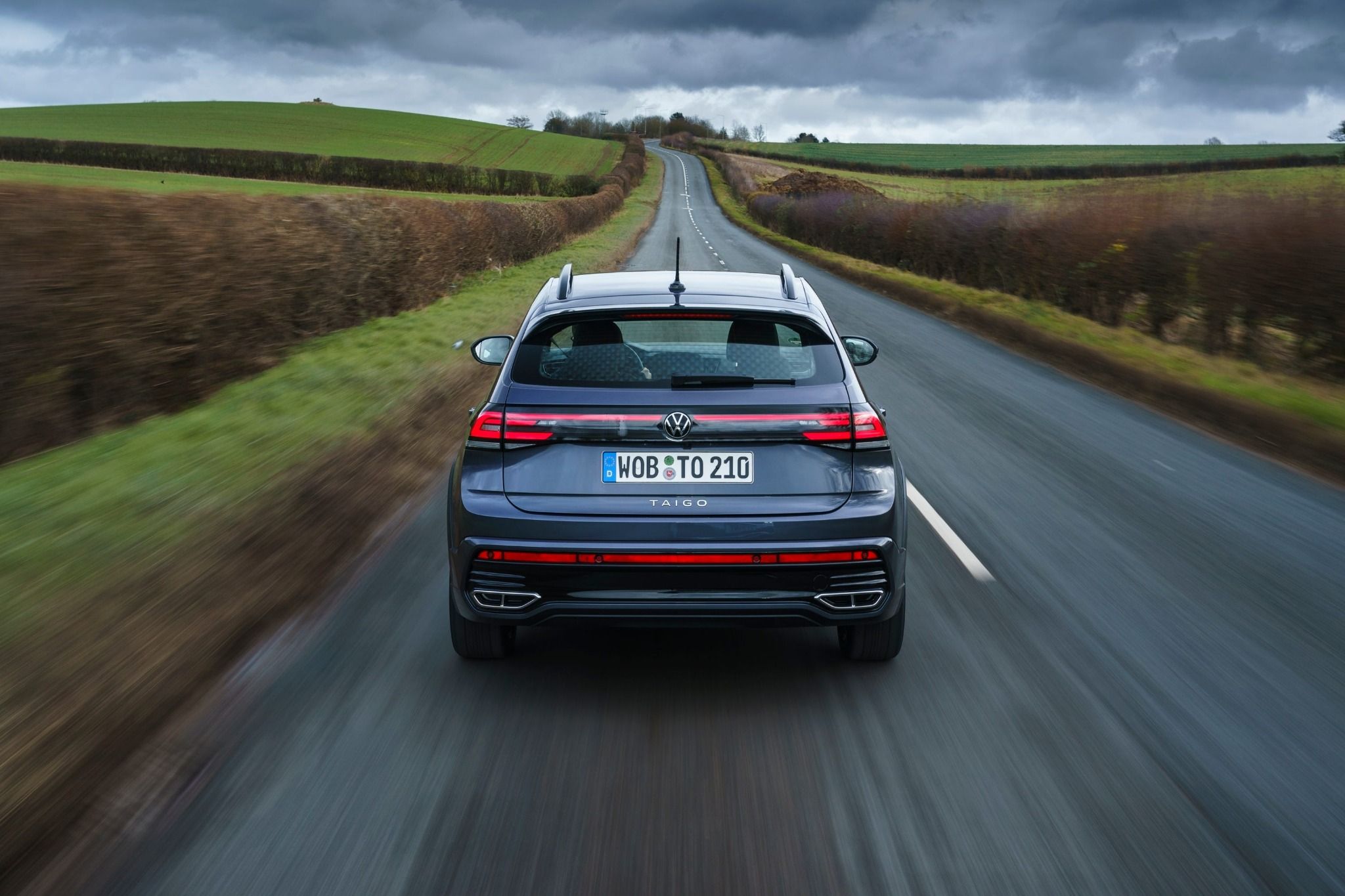 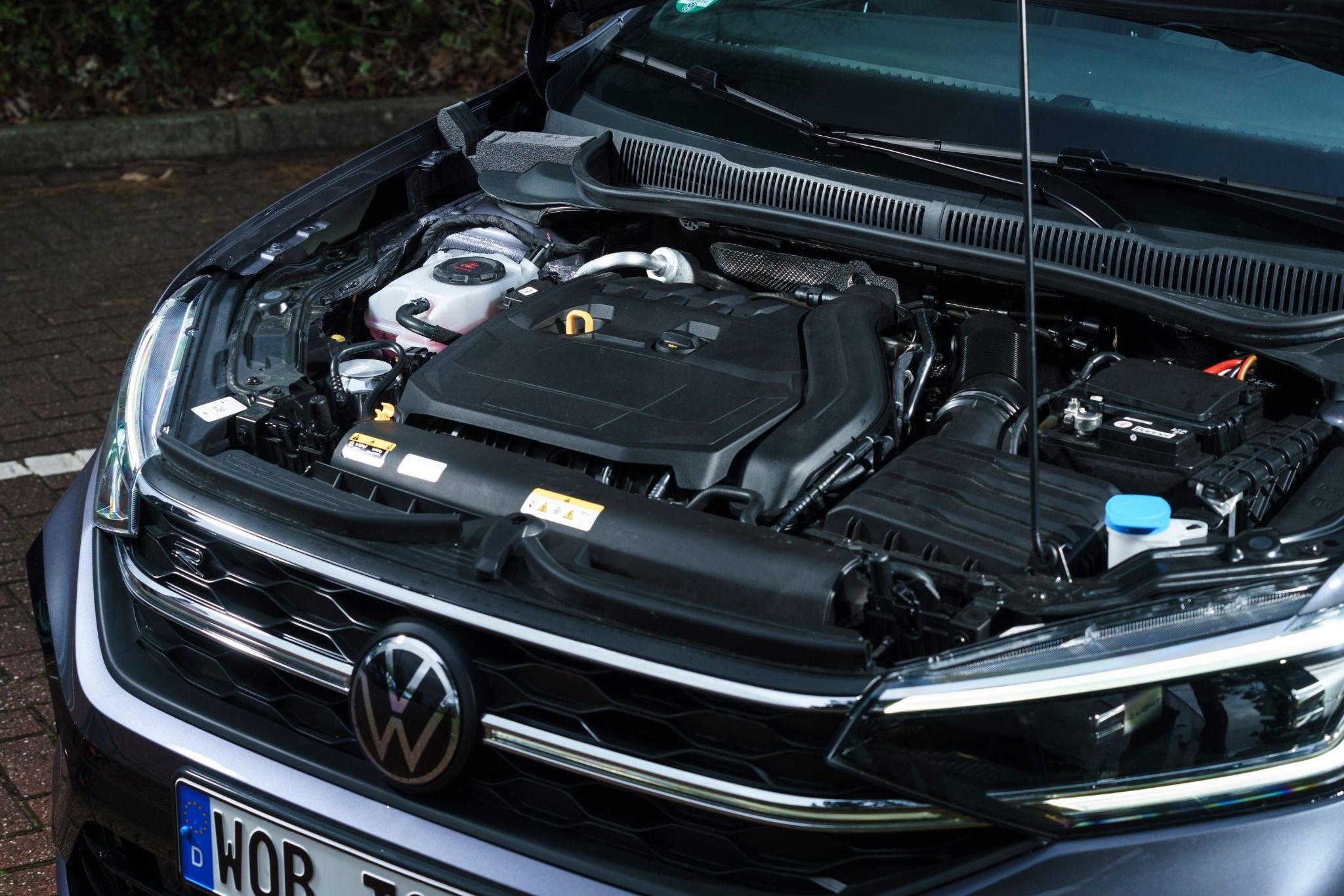 Volkswagen has definitely taken a different approach to the Taigo’s design. In the metal, it plays closer to a jacked-up hatchback rather than a fully-fledged SUV, but that’s no bad thing in fairness. The coupe-like styling is as obvious as it is in other cars, too.

The full-width light bar at the rear of the car is a cool feature too and brings the Taigo closer into line with other cars in Volkswagen’s line-up.

Volkswagen hasn’t gambled with the Taigo’s interior, instead adopting a look and finish which is very similar to that you’ll find in the new Polo. That means you get plenty of equipment and a generally good level of fit-and-finish - though there are some cheaper plastics on the door cards. However elsewhere the general perception of quality is good while the overall space is on-par with rivals.

That raked roofline doesn’t result in cut-back headroom for those sitting in the rear of the car, either, while the 440-litre boot is very generous and considerably bigger than the one you’d find in the Golf.

The range of specifications you get in the Taigo mirrors those on other Volkswagen models, so there’s Life, Style and R-Line to choose from. The level of equipment you get off the bat is generous, mind you, with those entry-level Life cars boasting LED headlights, an eight-inch touchscreen and 16-inch alloy wheels.

Style, meanwhile, adds Matrix LED headlights and larger 17-inch alloy wheels alongside a 10.25-inch digital cockpit. Move up to R-Line and the Taigo gains a sportier bodykit and a variety of black styling elements. Prices for the Taigo start from £21,960 in Life trim, rising to £29,140 for top-spec R-Line cars.

There was the temptation to think that the addition of the Taigo to Volkswagen’s SUV range would’ve only served to have muddied the waters, making it harder for buyers to actually choose a car that is right for them. However, it’s a genuinely interesting proposition, particularly thanks to its generous standard equipment levels and spacious boot.

Though it’s a little expensive in top-spec guises, opt for a more entry-level Taigo and there’s little reason why it can’t be a very rewarding purchase.