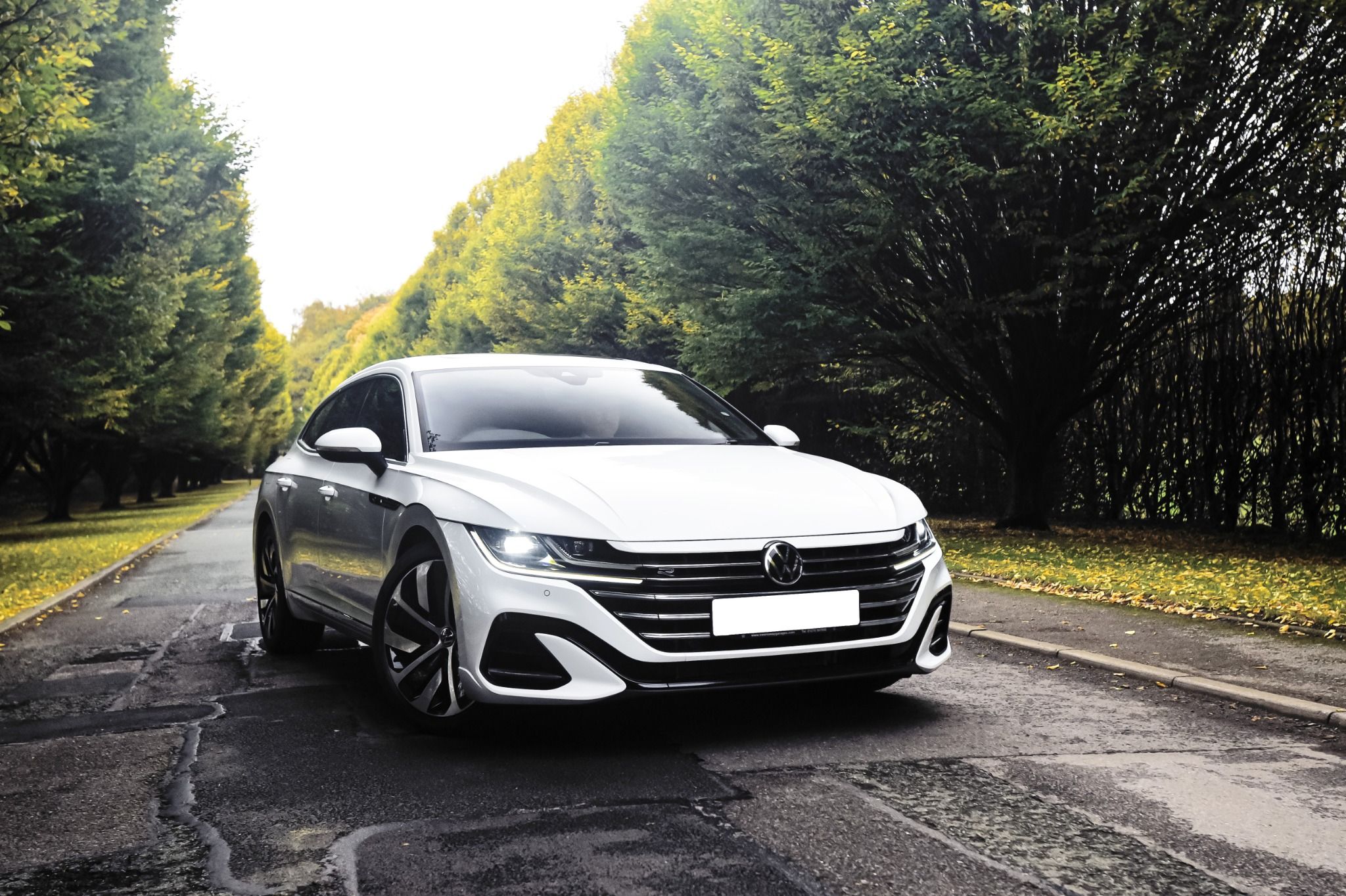 The New VW Arteon Shooting Brake makes a bold addition to the Volkswagen range with its flowing silhouette, stylish interior and intuitive handling.

An ambience of exclusivity is crafted by the harmoniously coordinated colours and materials of the interior, with either aluminium or fine wood inserts to leave a stylish impression. Plus, the Arteon Shooting Brake brings a variety of seat covers to choose from, depending on the equipment line, providing the option for fabric, ArtVelours or Nappa leather seat covers. 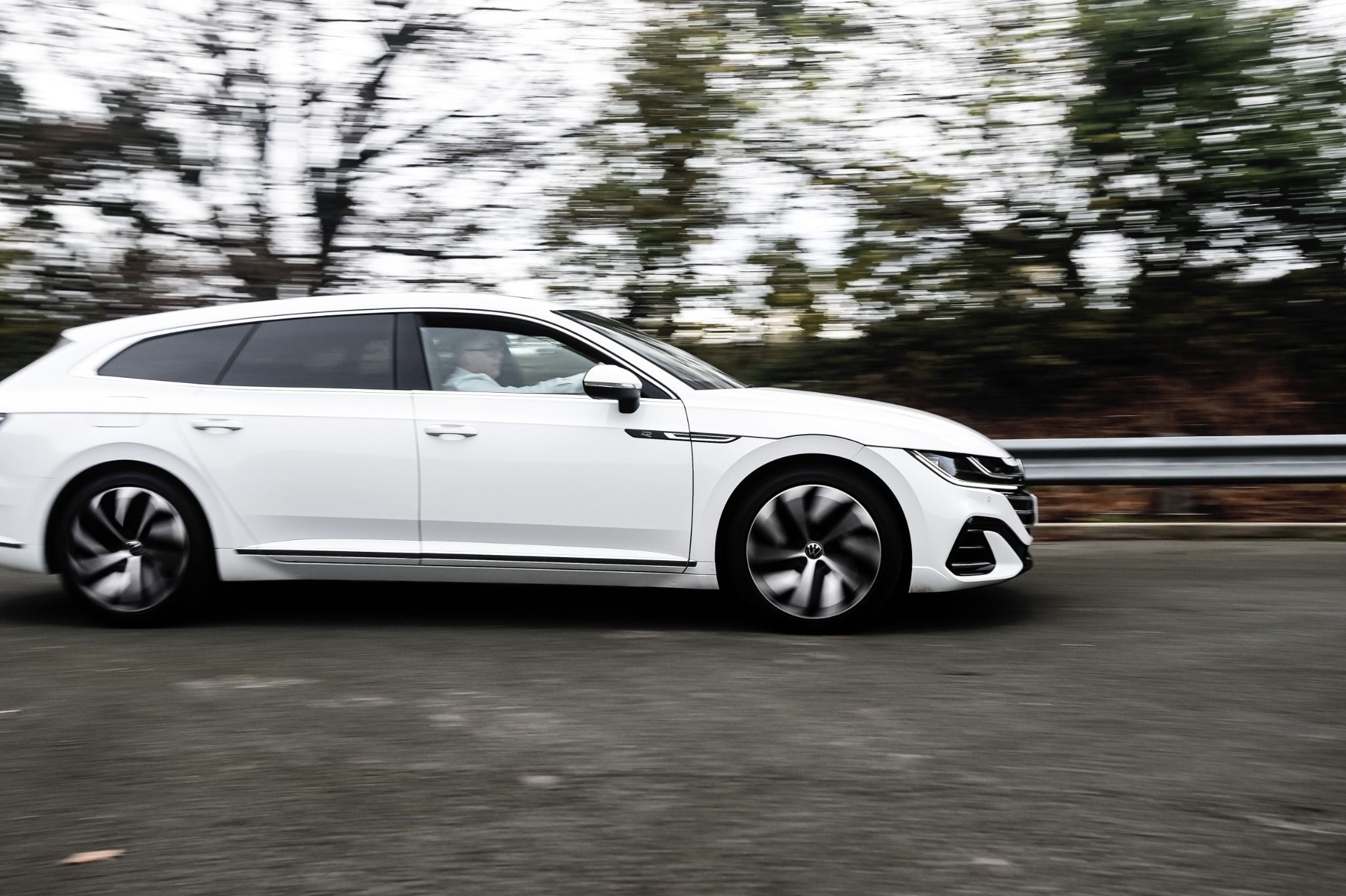 The innovative design of the Arteon Shooting Brake indicates just how exclusivity and practicality can be joined – from the wide radiator grille to the sleek roof line or the new LED-design tail light clusters, with a range of sporty and elegant light alloy wheels available to accentuate the Arteon's striking design.

The main technological offerings in the Arteon Shooting Brake are based around the Digital Cockpit Pro, with 10.25-inch High-resolution TFT colour display. It’s here where you’ll gain access to features such as your classic speedometer or satellite navigation, with 2D and 3D map view.

Apple CarPlay and Android Auto are both included too, allowing you to seamlessly link your smartphone to the car’s “Discover Media“ system, with its 8-inch colour touchscreen display, with the choice of the optional “Discover Pro” navigation system. The optional "Harman Kardon" sound system features an impressively polished sound and a sophisticated, elegant design.

The ‘Front Assist’ Autonomous Emergency Braking system can detect pedestrians and vehicles on the road and warn the driver in good time when pedestrians or vehicles are detected. If the driver does not react, the system can initiate emergency braking, within the limits of the system.

Plus, the optional Travel Assist keeps you in lane and other road users at a distance by maintaining your speed, taking into account the distance to the traffic ahead.

With the optional Park Assist system, it not only tells you whether a parking space is large enough as you drive past it, but it will also park for you*,**. You operate the clutch, accelerator and brake – and the car does the rest.

With the optional Area View cameras, you can get a bird’s-eye view of your car through the infotainment system, to get a full view from above of the car and its surroundings. 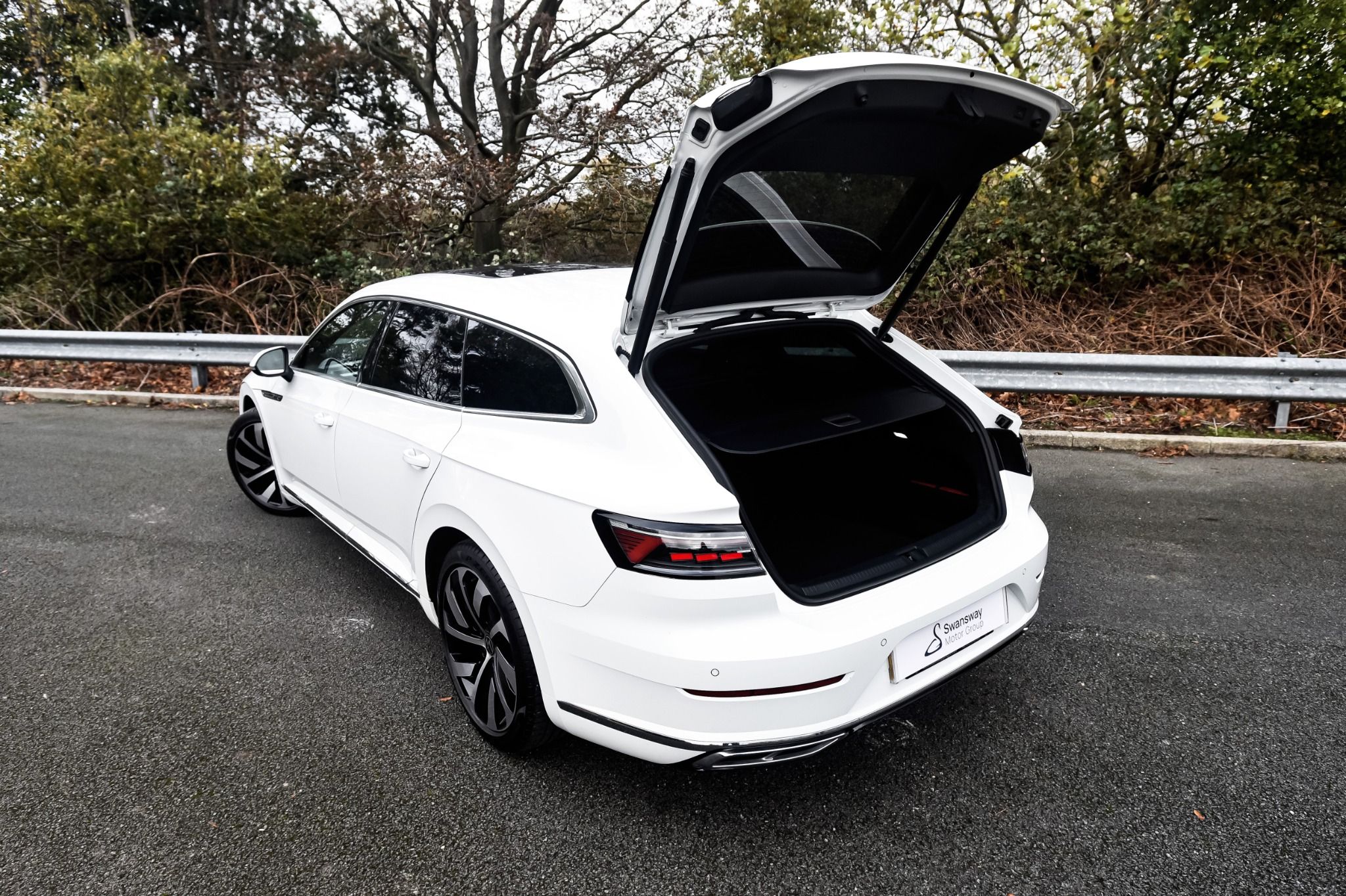 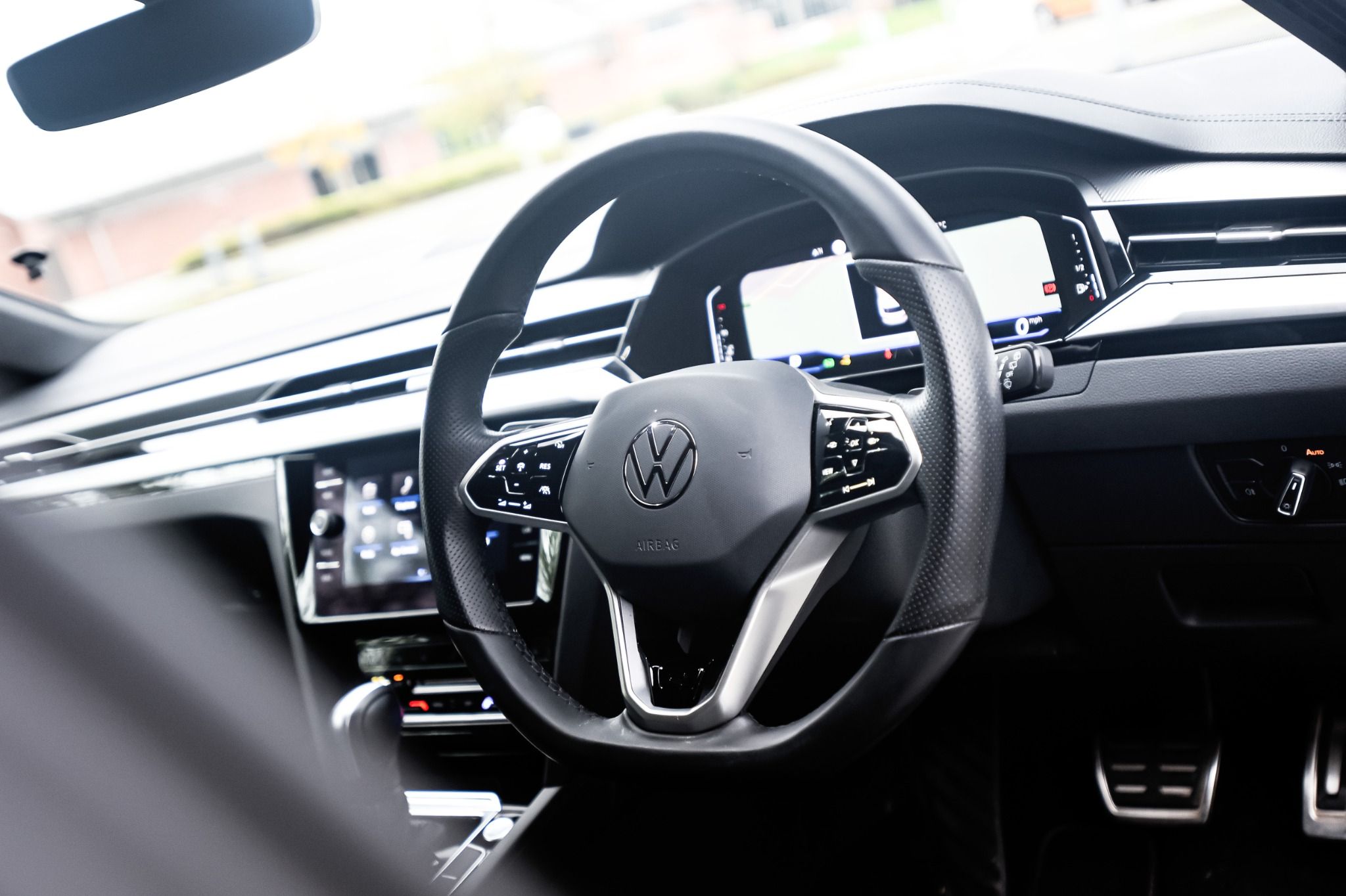 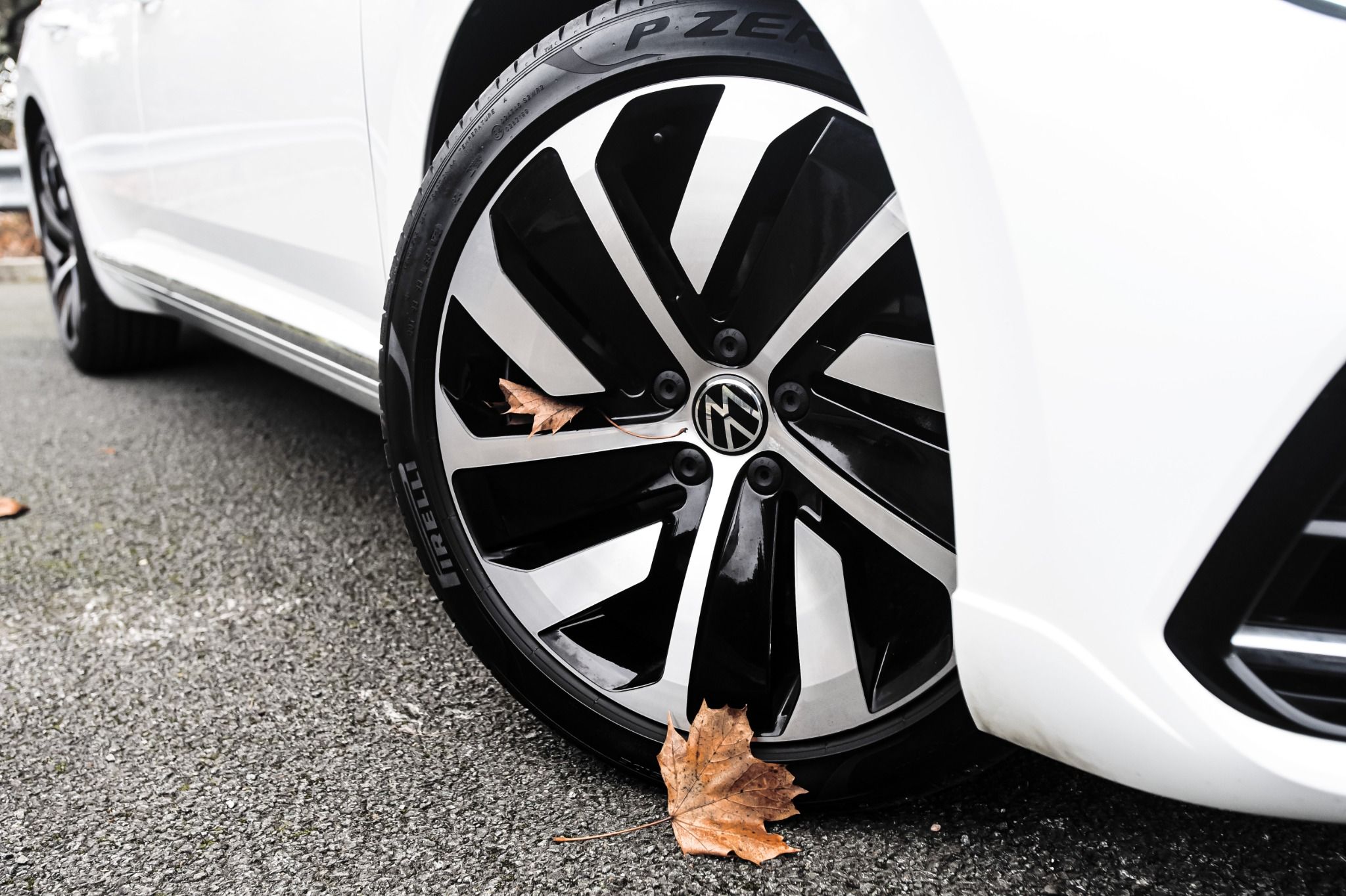 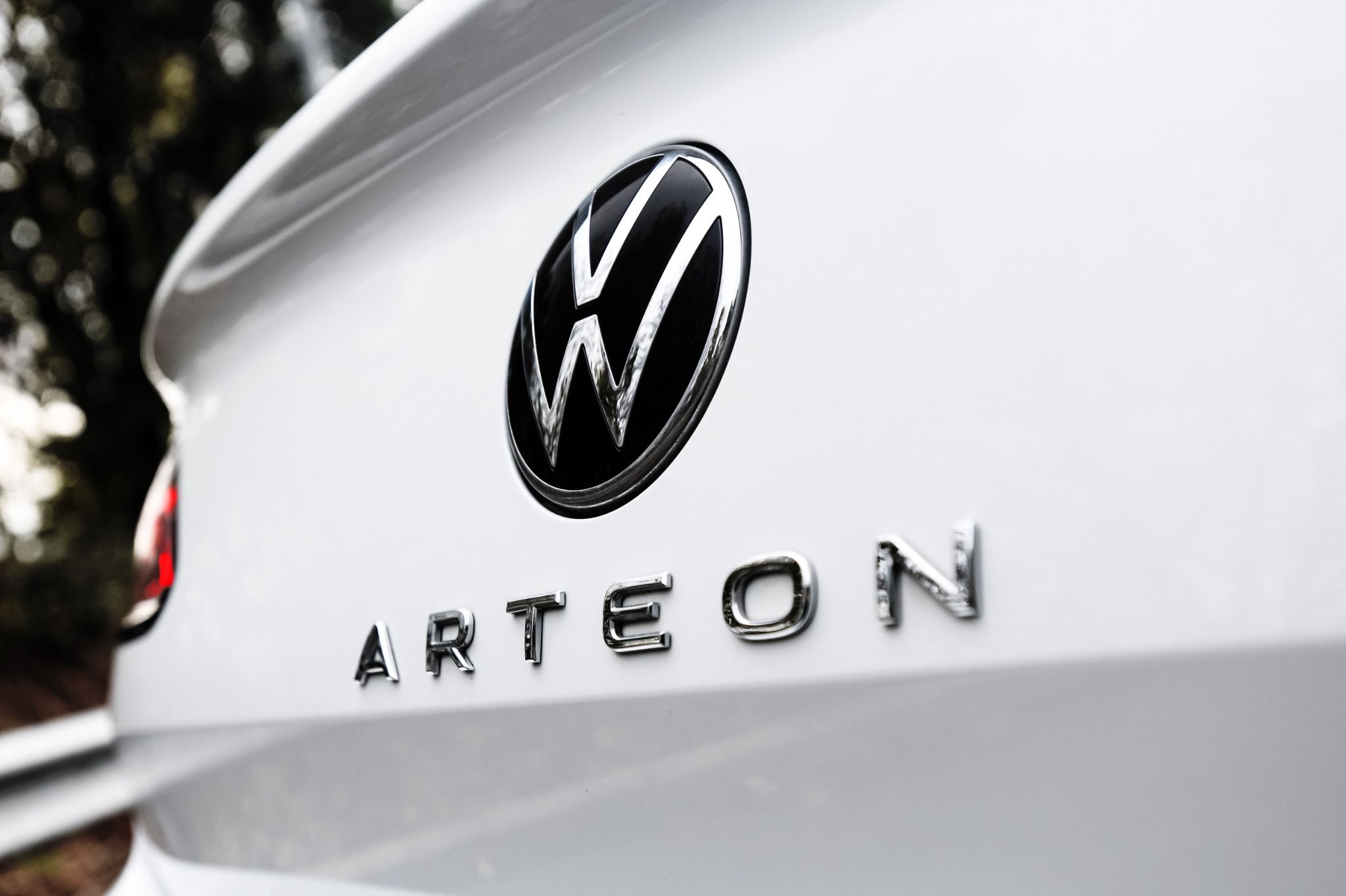 What trim levels are on the VW Arteon Shooting Brake?

Volkswagen’s facelifted Arteon has gone on sale with prices starting from £35,435.

This is the Arteon Shooting Brake and it’s a car which created a fair amount of buzz when it was first released in concept form. Fortunately, Volkswagen managed to get the Shooting Brake into production while retaining the concept’s jaw-dropping good looks, resulting in the car you see here.

But is it a car with only design in mind? Let’s take a look.

Of course, the biggest change here is that striking, sloping roofline. Apart from that, the Shooting Brake shares a lot with the regular hatchback model. It’s also available with a wide variety of engines, including both petrol - which we’re testing here - and diesel, while a new plug-in hybrid version has recently been added.

A range-topping ‘R’ version will join the fray too, bringing more performance to the Arteon range.

‘Our’ Arteon was driven by a 2.0-litre turbocharged petrol engine which then sends its 187bhp and 320Nm of torque to the front wheels via a seven-speed automatic gearbox. Volkswagen says that it’ll return up to 35.6mpg combined and emit 179g/km CO2.

In terms of performance, this Shooting Brake will crack 0-60mph in 7.5 seconds and be able to hit a top speed of 145mph.

The Arteon Shooting Brake feels most at home on the motorway, where it manages to bring a quiet and relatively refined experience which helps it to eat up the miles. This is certainly a plus point, given that the majority of Arteon drivers will be using their cars to sweep across long-distance journeys..

It does struggle around town, where its firm suspension and large alloy wheels combine to create a relatively jarring ride which can’t quite deal with potholes. The engine provides more than adequate performance though and when accelerating hard produces a surprisingly tuneful and sporty note.

To our eyes at least the Arteon Shooting Brake is one of the best-looking cars on sale today. Though the standard Arteon is by no means an ugly duckling, the Shooting Brake’s swept-back design really helps it to stand out from the crowd like few other mainstream cars.

We’d argue that the Shooting Brake would look the business in darker, more subtle shades. Though our car’s silver paint was by no means unpleasant, its dynamic looks would only be enhanced by a slightly more impactful colour. 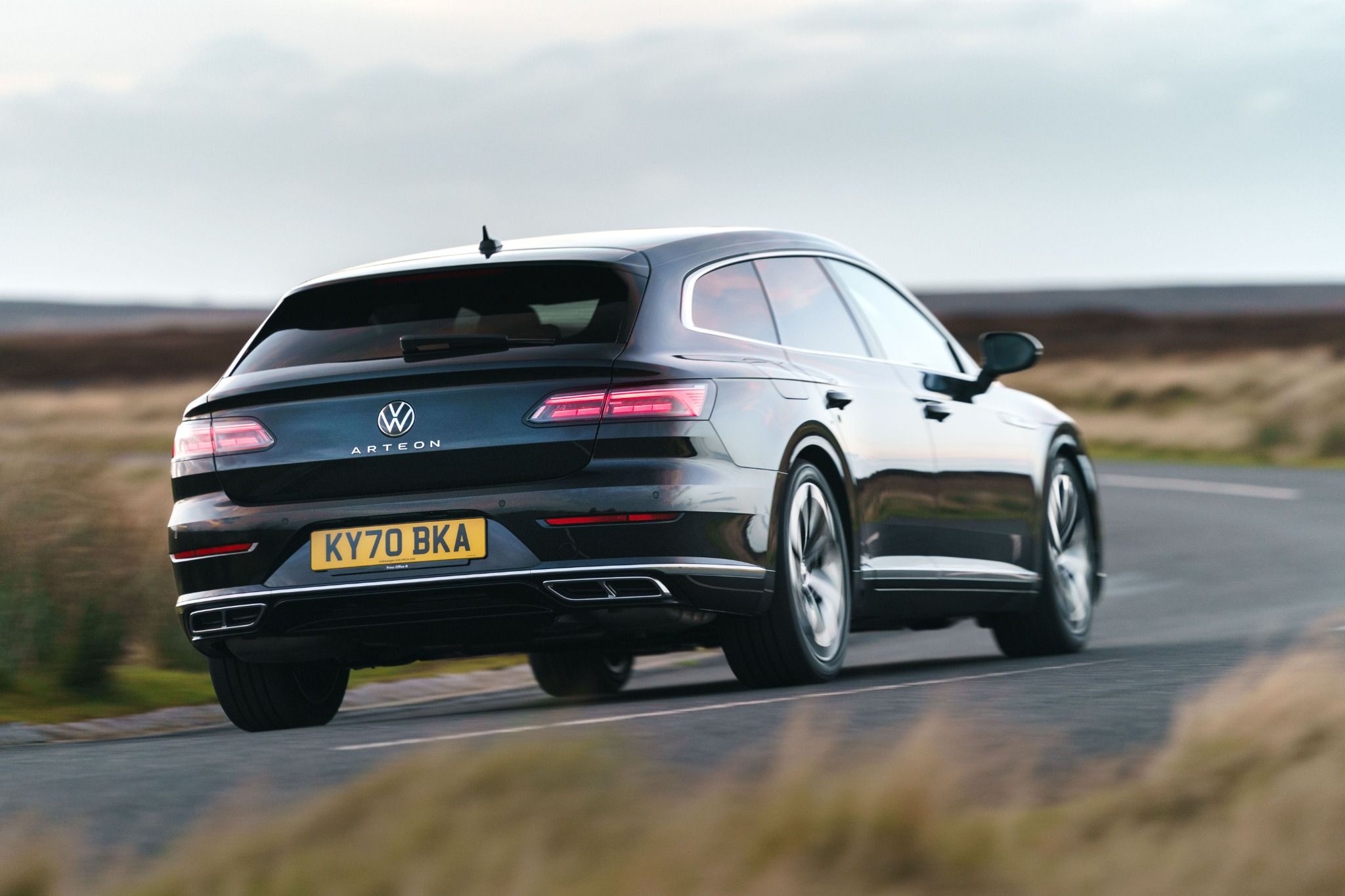 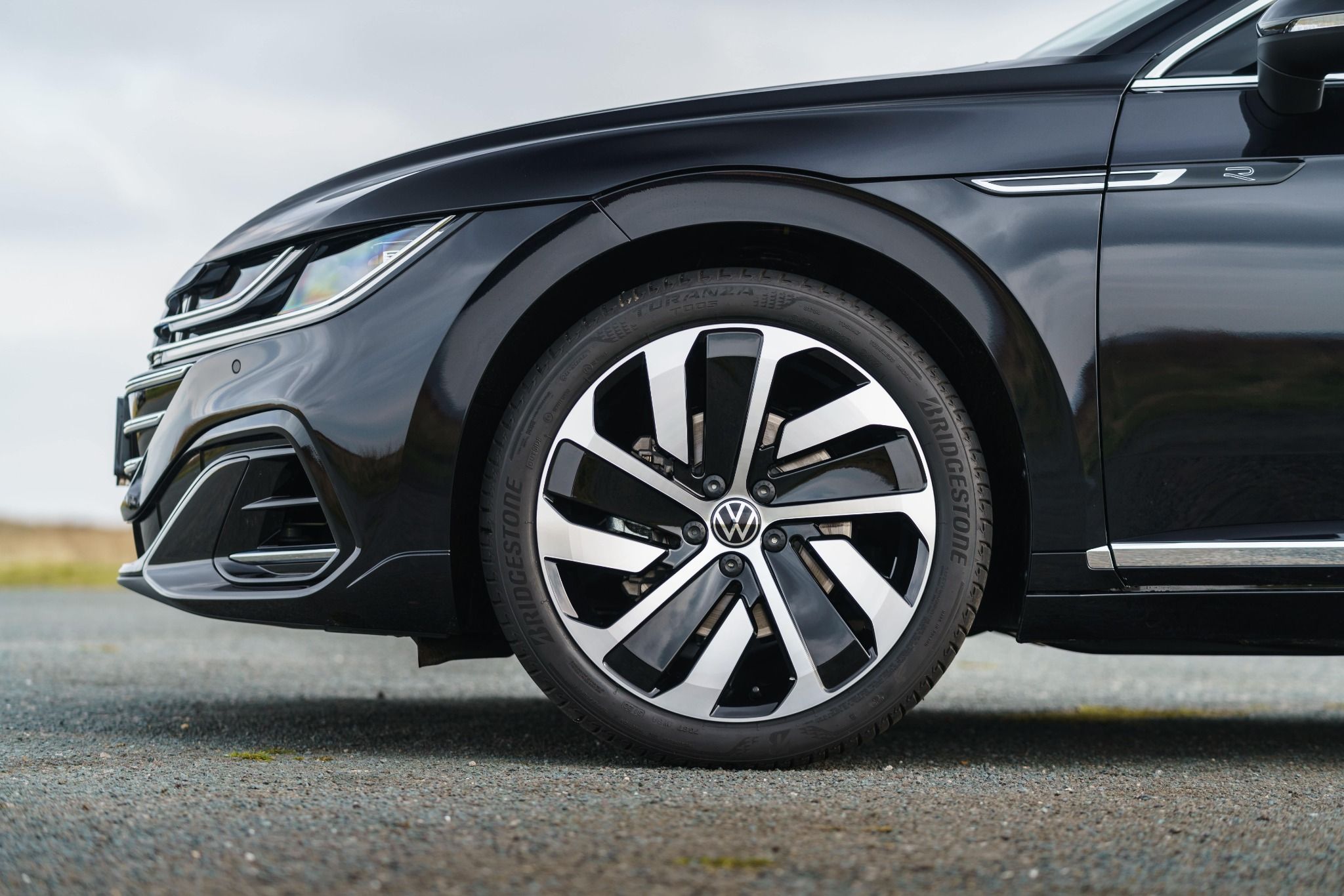 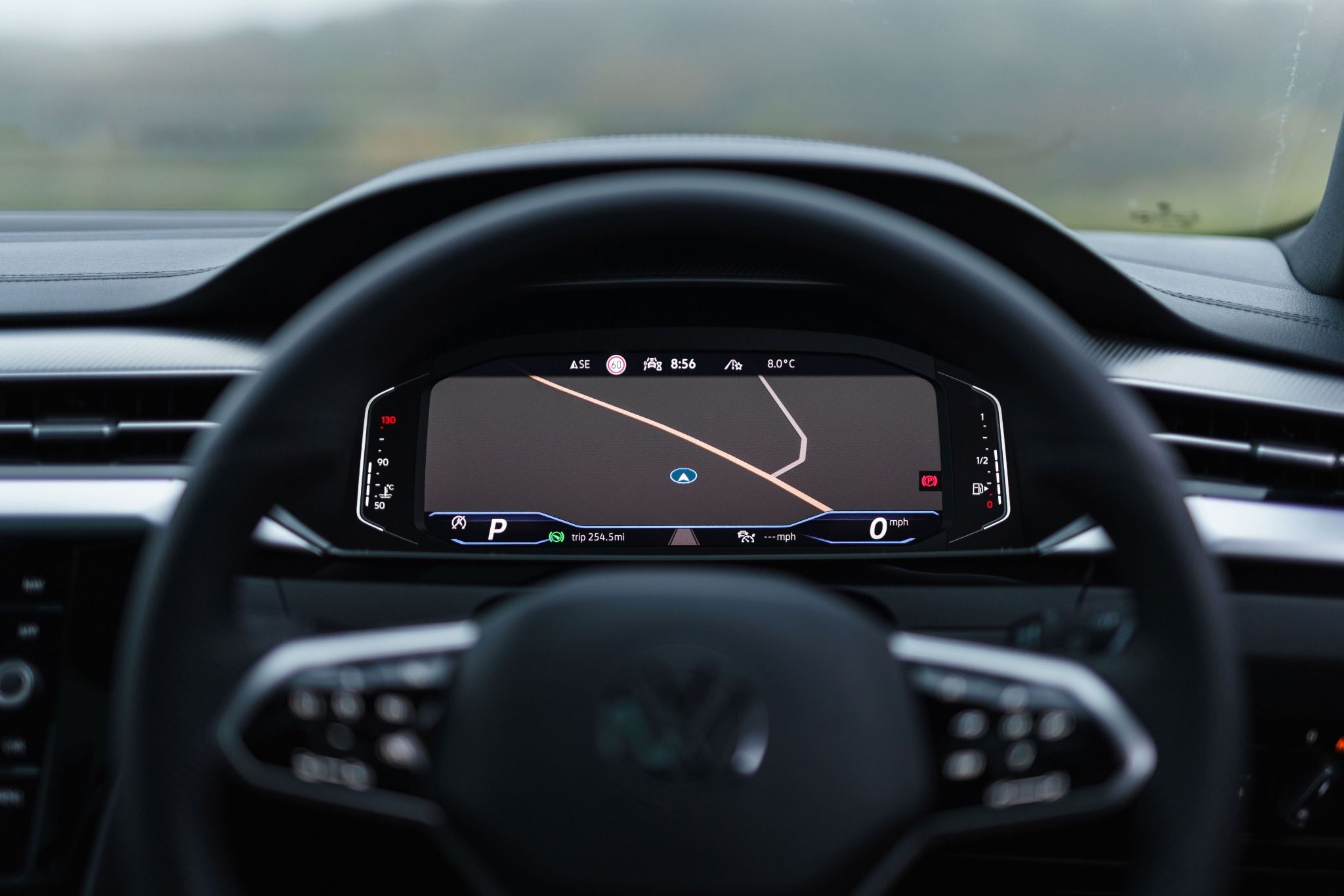 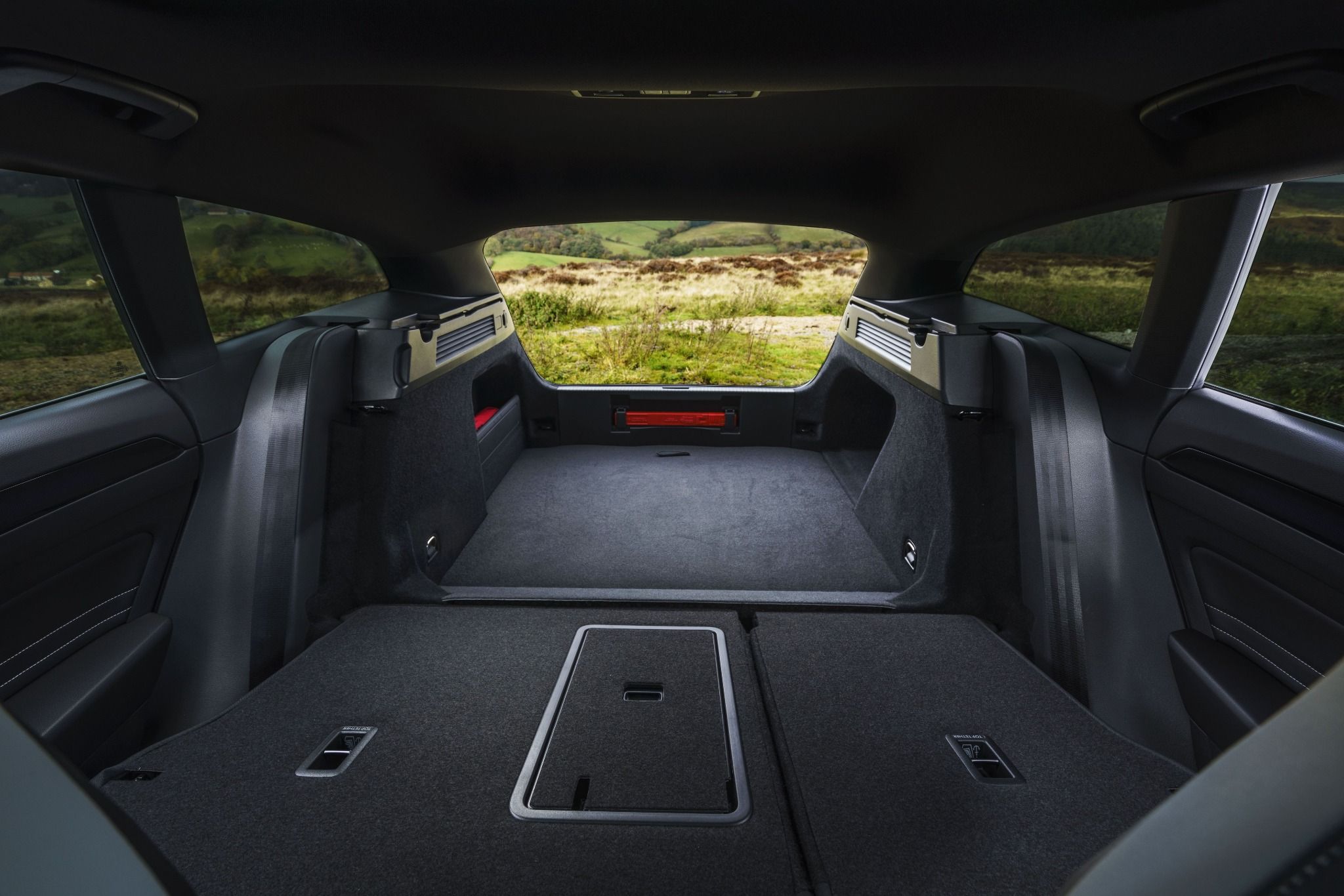 Given that the Arteon takes the place as Volkswagen’s range-topping saloon and estate, it’ll come as little surprise to hear that its interior has been lavished with all manner of high quality materials. It’s a pleasingly well-finished placed to be, with solidly fitted controls matching high-end leather and aluminium accents.

When it comes to boot space, the Shooting Brake affords its owners 590 litres of load area with the seats up and this can be expanded to 1,632 litres with the seats folded down.

Again, given the Arteon’s tip-top place in Volkswagen’s line-up, it’s got plenty of standard equipment to offer too. Features such as adaptive cruise control, three-zone climate control and a panoramic roof were just three in an exhaustive list of features fitted to our R-Line specification car.

In the centre of the cabin sits an eight-inch touchscreen which incorporates all of the media and satellite navigation functions. It also gets both Apple CarPlay and Android Auto as standard, making smartphone integration even easier.

The Arteon Shooting Brake is likely to be a big hit with those who like a touch of class from their estate car. It might not drive as keenly as rivals in this segment, but its fit-and-finish will likely prove to be a real selling point for those interested.

While the petrol engine is certainly an interesting addition, we’d be inclined to opt for either a diesel or plug-in hybrid powertrain were we the ones ticking the boxes.