Uncompromising off-road. Spirited on the road. The Amarok combines everything that you expect from an exclusive, premium-class all-rounder: a masculine design and robust construction along with plenty of power.

Ready for any challenge

Strong, tough and just as comfortable off-road as on. The Volkswagen Amarok is like nothing you've ever experienced. From gravel and tarmac to earth and mud, in the Amarok you'll experience the pinnacle of driving comfort on almost any terrain. It combines high ground clearance and excellent body stability with proven 4MOTION all-wheel drive. The result? Traction in virtually every situation, even with heavy payloads.Its wide wheelbase and increased ground clearance mean it can handle even extreme angles, gradients and slopes. So you can confidently tackle even the steepest terrain. In other words, you're on no safer wheels.

With 3+2 leaf springs as standard, you can rest assured that you'll have a comfortable ride even with payloads of up to 1,154kg. As well as this, the outstanding off-road ABS as well as the Hill Descent Assist ensure high levels of safety across all terrains, and an optional robust underride guard package protects the fuel tank against stones and branches on the ground. The Amarok offers premium driving comfort, even under the toughest of conditions. This is thanks to the perfect harmony created between the running gear and drive calibration – combined with the proven and tested 4MOTION all-wheel drive which packs a punch when you need it most. In the Volkswagen Amarok, you'll never be left handing.

We've got your back

With the optional “ergoComfort” seats both driver and passenger will enjoy the journey. As well as electrical 12-way adjustment, both leather seats come with manual 2-way adjustment and have been awarded the AGR seal of approval for outstanding ergonomics.

Whatever the weather, the Amarok make sure you don't need to sweat it. Intelligent sensors continuously adapt the temperature to your desired level, keeping you comfortable come rain or shine.

With a host of high-quality radio options and smart mobile online services such as App-Connect, you can make sure you're entertained while you're on the go. What trim levels are on the Volkswagen Amarok?

The 163PS, 204 PS and 224 PS six-cylinder turbodiesel engines with 3.0 l capacity have all the power you need, even in the most demanding situations. And for those moments when you want a little bit more, the overboost function briefly increases the performance of the V6 224 PS TDI engine up to 245 PS depending on the driving situation.g park distance control, which features both front and rear parking sensors and a rear view camera.

The Amarok’s interior boasts plenty of space to stow your belongings, including storage on the dash board, large compartments under the front seats and four cup holders. Countless extras ensure a comfortable drive and safe journey. 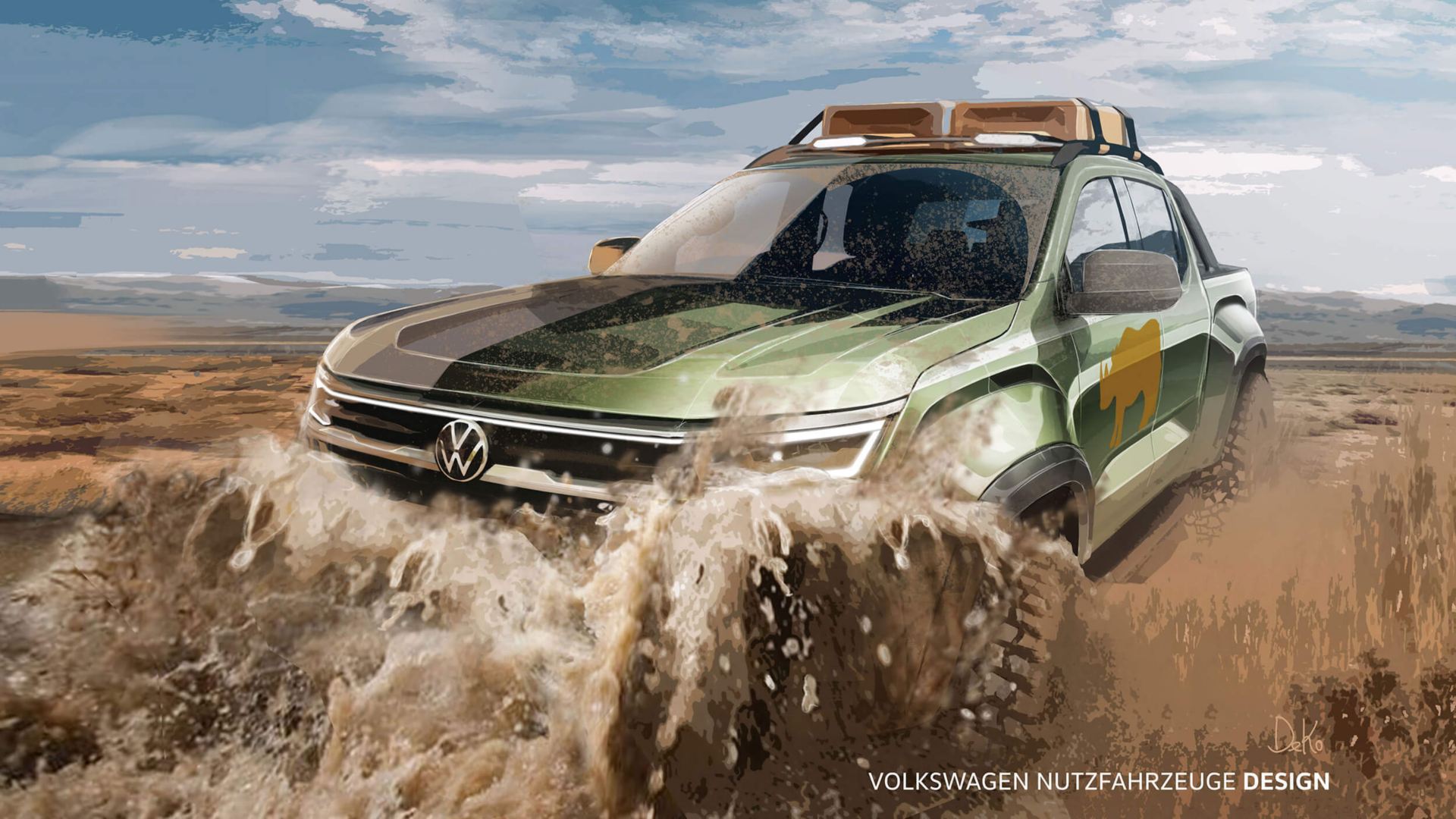 Volkswagen's big, tough pick-up designed to handle all terrains while keeping its occupants in car-like comfort.

Here's the Amarok - Volkswagen's big, tough pick-up designed to handle all terrains while keeping its occupants in car-like comfort.

Volkswagen Commercial Vehicles must not have got that memo. The Amarok’s theoretically efficient but overworked 2.0-litre diesel has been scrapped in favour of 50% more new-old-fashioned goodness. Four cylinders make way for six, totalling three litres from a V6 engine developed from the one in the Audi Q7 – and with an extra 60,000 miles of endurance testing.

The larger powerplant has key advantages, coping better with heavy payloads thanks to a broader torque curve, the peak of which starts from just 1,400rpm. It also sounds better than a four-pot and is generally sweeter and, let’s be honest, just better. Real-world fuel economy should be similar to that of the 2.0-litre, too, because it’s less stressed.

Torque is good. Torque makes the world a better place and the new Amarok has bundles of the stuff. It’s a vast improvement on the slightly wheezy old lump even without payload, pulling hard up to the speed limit and beyond. It’s a revelation with some weight on board. So climb on up into the spacious cabin and enjoy it.

Slow, numb steering is par for the pick-up course and demands a good twist of the wheel before turning in. Once settled into a turn the Amarok feels heavy and reluctant to change line, even when it actually will without too much fuss, and that comes partly down to the imprecision in the steering. 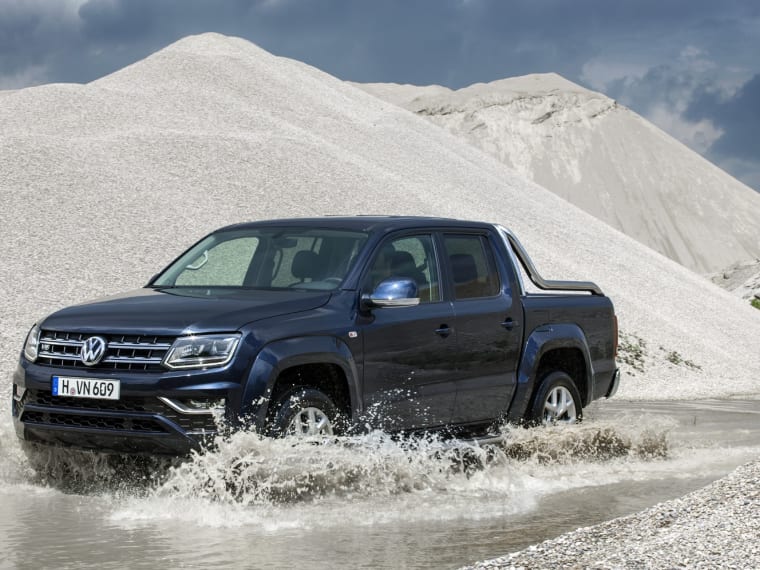 But aside from a little gentle wind noise around the windscreen the Amarok makes a surprisingly refined cruiser, happy to sit there quietly on the motorway for hours on end with a stable and comfortable ride (despite less-than-cutting-edge rear suspension) and a decent fuel economy return.

It might be a posh pick-up compared to most, but it can mix it in the muddy stuff too. Simply selecting off-road mode is enough to see it tackle impressively steep ascents and descents, plus serious camber and, with the help of the optional rear axle differential lock, proper axle articulation. On a tricky quarry-based off-road course outside Munich it was never fazed.

The man-size dimensions stay the same, so 5.25 metres long with the largest load bay in its class, capable of holding a Euro pallet sideways. That should count for something in the pick-up melee.

On the other hand VW has improved and updated the extremely nice interior to the point where it’s impossible to escape the feeling that it’s all about lifestyle as opposed to getting its fingernails dirty. Underestimate its off-road ability at your peril, but there’s an inescapable civility about it. Whether that’s a good or bad thing will depend on your outlook.

The double-cab design is good for families and working crews, although the leather upholstery of high-spec models, hard-surfaced though it is, isn’t likely to be the best suited to ferrying mucky workers around. Instead, there are handy touches like felt-lined recesses in the door pockets for loose change (again, though, not good for dirty hands).Obviously you’ll need to think about security for the load bay. You’ll either need a full hard top from a firm like Truckman or you can get a sliding, lockable cover. Neither comes cheap.Still, you can ford rivers with the 50cm wading depth and cross tricky terrain with approach and departure angles of 29 and 24 degrees. A towing capacity of 3.5 tonnes is also good to see.

Brace yourself. The prices haven’t been announced at the time of writing but they’re not going to be cheap. Expect high-20s thousands for a top-spec model before adding VAT, but exact figures won’t be confirmed until the UK bods have finished deciding on specifications.But it’s a rather nice place to be if 90% of your driving is on-road; arguably the nicest of any pick-up. It’s an interesting alternative to an SUV, with an epically useful boot if you live on a farm or your kids have muddy lifestyles

Volkswagen is expecting at least as much interest from potential SUV buyers as it is from anywhere else. You might see a would-be entry-level Touareg owner taking a peek at a high-end Amarok instead, but there’s a wealth of off-road and load-lugging talent there for the working man and woman as well. As long as they add seat covers and rubber floor mats…

This car summed up in a single word: Burly

If this car was an… actor it would be Gerard Butler. It’s good looking and that’s what will matter to many folks, but under the skin it’s just as much about brawn.

FACTS AT A GLANCE: