The interior is yacht-inspired; light, luxurious and fit for purpose. There is a commanding driving position, two 10" High Definition Touchscreens, individual sliding armrests and configurable mood lighting. You have everything you need to enjoy a contemporary, sophisticated driving experience.

You can opt for Configurable Ambient Lighting allowing you to vary the colour and shade of the cabin to suit your preferences. Driver and passengers can set their own preferred temperature if you choose the Four-Zone Climate Control option and to ensure your personal comfort you can opt for Automatic Access Height, as part of the electronic air suspension*, allowing you to get in and out with poise, as this optional feature automatically lowers the the vehicle by 40mm when parked. 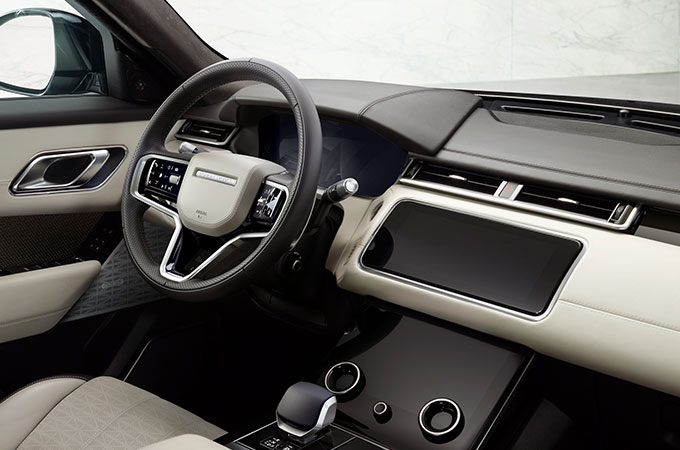 The boot comes with 632 litres in capacity giving you enough room already to transport your luggage or cargo but if you need to carry even more or longer items, when folding the rear seats down the capacity increases to 1,690 litres.

There is a range of driver assist and safety systems which you can get with the Range Rover Velar. One system is blind spot monitor, this system detects if a vehicle is approaching your blind spot then alerting you to this.;

Another system is the autonomous emergency braking which will alert the driver to a potential collision and if no action is taken the brakes will be applied automatically to avoid or reduce the impact of the collision. 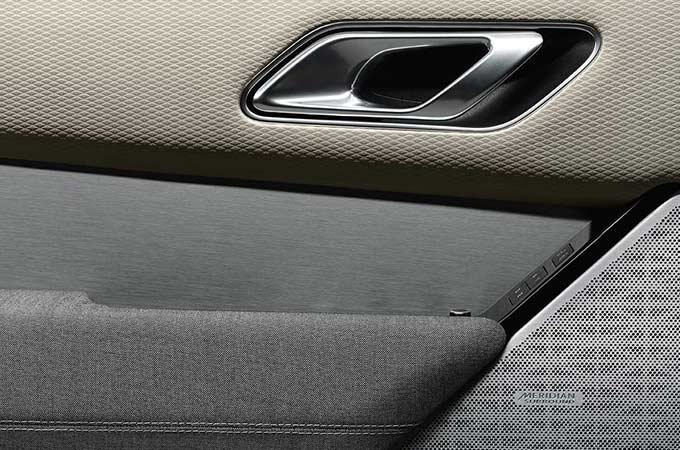 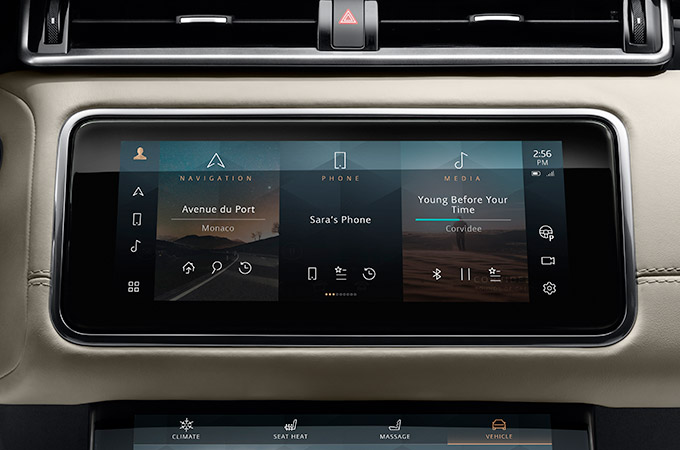 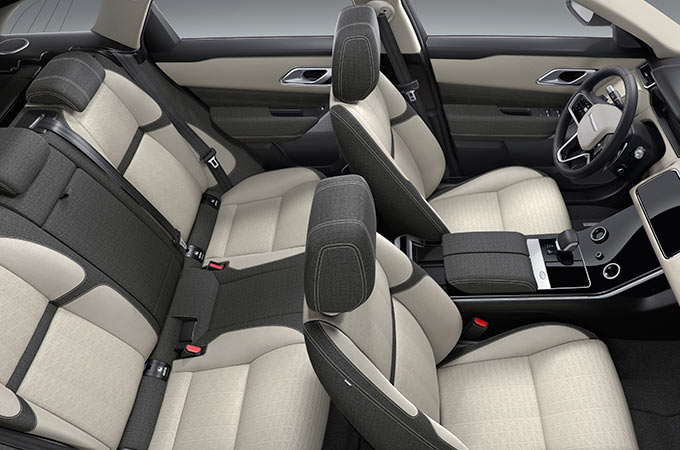 What trim levels are on the Range Rover Velar?

Range Rover Velar leads the way in innovation and design. It combines the distinctive Range Rover floating roof with modern, clean lines. This car looks equally at home in a refined or rugged setting. The sleek presentation gives it a distinctive, elegant edge, whilst it remains instantly recognisable as part of the Land Rover family.

Range Rover Velar has a finely tuned 8-Speed Automatic Transmission, which has been refined by our Land Rover engineers to ensure that whilst every transition is smooth, the response is extremely rapid. What this means for the driver and passengers is that gear changes are almost unnoticeable. Supreme comfort guaranteed.

Range Rover’s classily-styled Velar was introduced as a sort of halfway house between the Evoque and the full-fat Range Rover Sport.

Range Rover’s classily-styled Velar was introduced as a sort of halfway house between the Evoque and the full-fat Range Rover Sport. With premium features and touches dotted throughout it, the Range Rover Velar has proved popular, but that hasn’t stopped Land Rover from giving it a mid-life facelift. It hopes that a few tweaks will boost the Velar’s appeal even further - but is that the case? Let’s find out.

Though on the face of it it’s hard to tell what has changed with the new Velar, the developments under the skin have been quite extensive. The Velar now gets a range of JLR’s latest engines, including 3.0-litre diesel and petrol units incorporating mild-hybrid technology, as well as a new four-cylinder petrol plug-in hybrid. Active road noise cancellation has also been fitted to ensure that the cabin remains as hushed as possible, while JLR’s latest Pivi Pro infotainment system has been incorporated into the cabin, replacing the older setup which was really starting to show its age.

As mentioned, there are two petrols and one diesel engine - all incorporating mild-hybrid technology - giving buyers after a more conventional powertrain an option - with a new plug-in hybrid setup sitting alongside. The plug-in hybrid could be one of the strongest options for the Velar, too. It has 398bhp and 640Nm of torque, which means it’s got more than enough punch to get the Velar up to speed in a quick enough fashion. The diesel, however, is also a great option for those who value high-speed refinement.

The Velar has never been pitched as an overtly sporty model and that attitude has been retained for this updated version. It’s a relaxing car to drive, favouring a more sedate pace than other cars in JLR’s stable. The noise cancellation technology means that the cabin stays supremely hushed, while the quiet engines settle into the background. Both the diesel and plug-in hybrid feel well-suited to the Velar, offering easily-accessible performance with a real focus on refinement. The diesel can prove a little grumbly when pushed hard, but this really is a tiny criticism in what is an otherwise well-rounded driving experience.

The Velar has always been the classiest of JLR’s cars in terms of design, so it’s little wonder why things have been kept much the same for this facelifted version. It’s a big car, of course, but it doesn’t feel intimidating or brash, with the car’s rounded panels giving it a softer appearance than other rival SUVs. This updated Velar features redesigned front lights and redesigned lower front bumpers, but it’s a really subtle change overall. 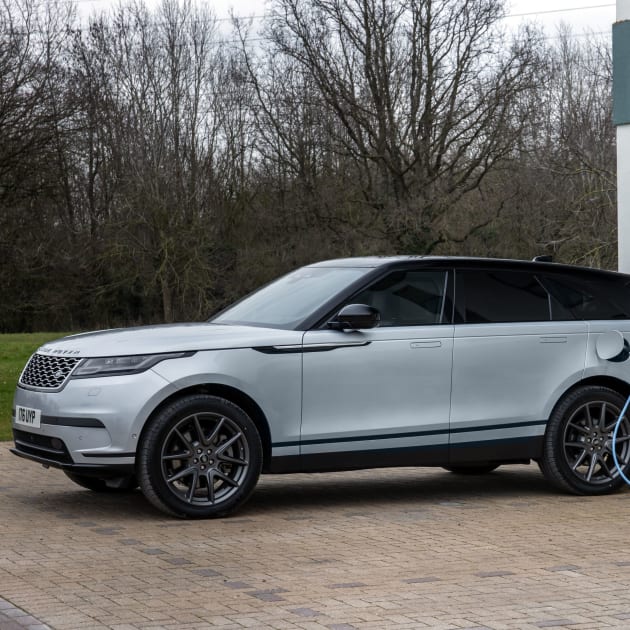 There were few complaints about the Velar’s interior when it was initially introduced, so many areas of the cabin have been left the same. There’s still a great approach to materials, with high-end finishes used throughout the car’s interior. They combine to make it into a really plush place to sit. Space-wise the Velar ticks the boxes too, with a good level of knee and headroom available for those sitting in the back - though taller passengers might find it a touch tight. In terms of boot space, the Velar offers 632 litres as standard which can be boosted to 1,690 litres by folding the rear seats down.

Given that it’s a premium vehicle it’ll come as little surprise that the Velar is packed with features. As mentioned earlier it now benefits from JLR’s new Pivi Pro system, which has been incorporated into other facelifted models. It’s a shame that, in the Velar, it’s accessed by a smaller screen than we’ve seen in other cars, though the lower screen for climate control functions looks great and operates well too. Other standard equipment includes two-zone climate control, 19-inch alloy wheels and LED headlights.

The Velar delivers a brilliantly rounded experience and feels like the sweet spot in Jaguar Land Rover’s range of more road-focused cars. It’s got a great interior, classy exterior styling and a host of high-tech functions, too. The range of engines on offer is good, too, with buyers of all types well catered for.