From£57,350.00 OTR
Find Out More
We have offers across the range and we are here to help find the best offer for you. We can also tailor a finance solution for you and also organise your part exchange. Please contact us for more information on our great range of offers. Send an Enquiry
Specification The new Land Rover Discovery Specification Build and configure your DISCOVERY now. Configure & Build
Land Rover Discovery Your Next Steps
Send an Enquiry
Book a Test Drive
Find a Dealer
View All Offers

The Most Versatile SUV

With further refinement, ingenuity and sophistication, the all new Discovery remains unparalleled for performance and prestige. With astute farsightedness, this vehicle has been designed to retain all the elements of the classic Land Rover, so there is all of the capability you could want, but it encompasses sleek, sophisticated styling, that makes a bold, ahead-of-its-time design statement.The exterior is an innovative re-imagining of Discovery, to ensure that it retains its uniquely recognisable poise and presence. It also reaches a new heights of finesse, as demonstrated by its elegant, graceful lines.

The superb interior is an evolution of the classic Discovery design elements, composed of strong horizontal and vertical lines around the stylized central beam. With premium leather, sculpted wood and handsome finishers, combined with exquisite craftsmanship and attention to detail, the overall experience is one of luxurious, modern living.

The panoramic roof is a superb option that enhances the spacious vehicle's interior and enables further enjoyment of the environment,as it floods the cabin with natural light, extending even as far as the third row of seats. To maintain a comfortable temperature inside the cabin, there is, however, a dark tint to the toughened glass and there are powered interior blinds for additional shade or privacy as required.

The powered inner tailgate can provide protection from the elements, as well as allowing for easier loading and acting as a retainer when the load space area is filled. Alternatively, use it as a platform for sporting and social events and never miss a moment of the action.

This range includes the latest incarnation of high efficiency 2.0 Sd4 Ingenium diesel engines, 3.0 litre Td6 diesel engine, and the 3.0 Si6 Petrol engine. All of which enables maximum power to be accessed. And of course you can choose from diesel and petrol engine options, each one a delivering impressive efficiency, effectiveness and enjoyment for the driver.

Free & Fast Online Part Exchange Valuations Interested in selling or part-exchanging? Use our tool to find out what your vehicle is worth. Value Now

If you opt for the Terrain Response 2 system, it will monitor your driving conditions and automatically select the modes for optimum chassis and drive capability, whatever the terrain.

Optional wade sensing technology in the door mirrors can alert you, if water levels approach the 900mm maximum depth for wading. You will be able to access real-time pictorial information, through the control system, which really comes into its own when visibility is poor. 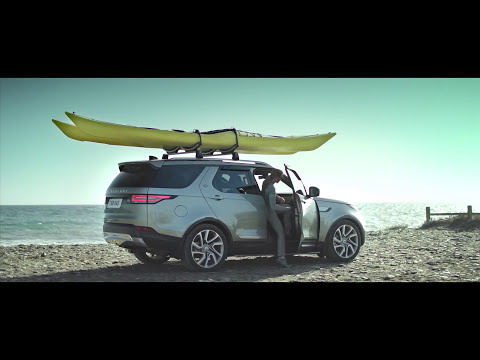 What trim levels are available with the Land Rover Discovery?​

The new Discovery has been around a little while now and, like or loathe the way it looks, it’s been immensely popular. It’s capable of seating seven in comfort yet able to conquer nearly any type of terrain, so there’s little wonder why it’s been snapped up by consumers.

Initially offered with a range of traditional diesel and petrol engines there’s now a new powertrain, and it uses Land Rover’s 2.0-litre petrol ‘Ingenium’ unit. It may appear, on paper at least, that this engine is too small to carry along the heavy Discovery, but is that the case? Let’s find out.

The biggest change here is the engine. We’ve previously seen this small capacity petrol engine used in a variety of Jaguar and Land Rover vehicles, in an attempt to combat the growing distrust of diesel units.

Elsewhere, it’s business as usual. The Discovery still gets seven useable seats that can fold completely flat, as well as a full suite of driver aids to ensure that no weather or obstacle can stop you from getting where you need to go.

This new Ingenium engine is, at 2.0-litres, the smallest capacity drivetrain offering you can get on the Discovery. It’s paralleled by a diesel version – though it’s the petrol that we have with us here. It produces 298bhp and an impressive 400Nm of torque, which means it’s able to get the two-tonne Disco up to 60mph in a reasonable 7.3 seconds and onwards to a top speed of 125mph.

Of course, a by-product of a smaller engine working hard to lug a big, heavy body around is that it hurts economy. Land Rover claims that this version will return 29.4mpg on the combined cycle, though in daily driving we achieved closer to 22mpg. Emissions are, again, as you’d expect for a large SUV, sitting at 222g/km CO2.

The Discovery doesn’t encourage spirited driving – it’s far too big and heavy for that. Rather, it’s at its best when you sit back and soak up the comfort rather than put your foot down. Any attempt at pushing it down a tight back road is soon quashed by copious body roll, slow steering and of course, its sheer size. It’s not as ponderous as you might expect, though, and will certainly show a clean pair of heels to most similarly-sized SUVs.

The Discovery flattens out potholes and makes mincemeat of choppy road surfaces. The price to pay is some wallowing over larger bumps, though the air suspension takes off all the hard edges with ease.

Make no mistake, the Discovery’s looks have caused debate since the moment it was first released. Some love its rounded, softer look – particularly compared to the model it replaces – while others downright loathe the car’s styling, and have thrown much criticism at the off-set placement of the rear licence plate. As for us, we don’t mind it.

It’s impactful out on the road – though any car of this sheer size is going to be – and the large alloy wheels are just the right size so as to counteract the huge amount of metal that makes up the Discovery’s body.

The interior of the Discovery is an impressive blend of form and function. There’s tech here – that’s for sure – with features such as heated and cooled seats, and a heated steering wheel all included on our test car. Up front, it’s a comfortable and spacious place to be, with the seats providing plenty of support, while those in the middle row are equally well-off for space.

Anyone in the rearmost seats should be happy, though taller passengers will likely be best sat there for shorter journeys. Children will be just fine here though, and – in truth – most average-height adults will be too – there’s a surprising amount of legroom. If you’re needing as much luggage space as possible then both second and third rows fold completely flat, offering up a gargantuan 2,406 litres of luggage room.

Our test car came in Luxury trim, which meant that it was adorned with plenty equipment as standard. A full 10-inch colour touchscreen came fitted as it does on all Discos, and this houses functions such as satellite navigation and media. It’s not a bad system, with icons that are clear and easy to understand, but it lacks some of the crispness that you get in rival offerings. That said, simple operations such as pairing your phone or playing a song from a media device are easy enough to do.

Of course, the devil is in the details. Those details, in this case, are optional extras, and those fitted to our test car weigh heavy on the car’s overall price. That heated steering wheel? £200. Grey metallic paint? £850. The Discovery comes relatively well specified as standard, but start ticking too many boxes and you’ll quickly find the price creeping skywards.

​The woeful fuel economy of this 2.0-litre petrol engine will be, for most, a serious sticking point and a barrier to ownership. The car still feels at its best with diesel power, and that’s where we’d recommend the majority of buyers stay. The rest of the Discovery is still a hugely compelling package, though – it’s hugely comfortable, unbeatable off-road, spacious and premium. As big family SUVs go, they don’t get much better than this.​

*Important Information: Representative Example relates to a Discovery 2.0L SD4 Landmark Automatic. 3.90% APR Representative available on Discovery 20MY registered between 1st January and 31st March 2020 at participating Retailers only. With Land Rover Personal Contract Purchase you have the option at the end of the agreement to: (1) return the vehicle and not pay the Optional Final Payment. If the vehicle has exceeded the maximum agreed mileage a charge per excess mile will apply. In this example if the vehicle has exceeded 40,833 miles, a charge of 16.8p (including VAT at 20%) will apply per excess mile. If the vehicle is in good condition (fair wear and tear accepted) and has not exceeded 40,833 miles you will have nothing further to pay; (2) pay the Optional Final Payment to own the vehicle or (3) part exchange the vehicle subject to settlement of your existing credit agreement; new credit agreements are subject to status. Representative Example is based upon an annual mileage of 10,000 miles. Credit is subject to status and only available to UK residents, aged 18 and over. This credit offer is only available through Black Horse Limited trading as Land Rover Financial Services, St William House, Tresillian Terrace, Cardiff CF10 5BH. We can introduce you to Land Rover Financial Services to provide funding for your vehicle. We may receive commission or other benefits for introducing you to the lender. Model shown may include optional features and may not be representative of the offer displayed.

View All Our Locations >
Your lifestyle. Your car. Your Land Rover.
Back to Top
New Cars
Used Cars
Offers
Servicing
Get a Free Valuation
Customer Testimonials
Car Dealerships
Careers
Company Info
© Swansway Group
Valley Drive, Stafford, United Kingdom, ST16 1NZ
Reg Office: Swansway Garages Ltd, Gateway, Crewe, CW1 6YY, United Kingdom
Reg. Company Number: 04507008
VAT Reg. No. 823 8072 33
Financial Disclosure
Swansway Garages Limited are a credit broker and not a lender. We are Authorised and Regulated by the Financial Conduct Authority (FCA) under reference number 304920. Finance is Subject to status. Other offers may be available but cannot be used in conjunction with this offer. We work with a number of carefully selected credit providers who may be able to offer you finance for your purchase.
Social

Legal
Back
Vehicle Valuation
Compare Saved Vehicles
Top
Close
Your Cookie Settings
Select your cookie settings
Strictly Necessary Strictly Necessary cookies are essential to let you move around the website and use its features, such as accessing secure areas, shopping baskets and online billing. These cookies allow our website to provide services at your request.
Performance Performance cookies collect information about how you use our website e.g. which pages you visit most often, and if you experience any error messages. They also allow us to update our website to improve performance and tailor it to your preferences. These cookies do not collect any information that could identify you - all the information collected is anonymous. They will not be used to target adverts to you on other websites.
Functional Functionality cookies are used to remember the choices you make, e.g. your user name, log in details and language preferences. They also remember any customisations you make to the website to give you enhanced, more personal features.
Targeting Targeting cookies collect information about your browsing habits to deliver adverts which are more relevant to you and your interests. They also measure the effectiveness of advertising campaigns.
Save Settings
Cancel Changes

Your settings will take affect when you refresh the page or move to a new page. Find out more about cookies