With an option for 7 seats, this CR-V Hybrid is perfect for large families.

The Hybrid that does it all

The interior of the new Honda CR-V Hybrid screams luxury, ​with beautiful upholstery which offers comfortable seating. Not only this but the Spacious cabin makes for a much more relaxing journey. The steering wheel mounted thumb pad​ makes it easy to scroll through to see information such as SMS and email display, audio information, and even smart vehicle maintenance information on the driver information interface.​

A 3 mode centre console, makes for sleek storage.The centre console tray can be placed in forward or rearward positions which provides versatile storage between the front seats

Using Bluetooth or USB, you can access information and playlists on your smartphone straight to your SUV. You can transfer your phone’s interface via Apple CarPlay or Android Auto to the fantastic 7” touchscreen to access apps allowing you to make calls or sends and receive messages.​​

The Honda CR-V Hybrid had a distinctive shape, that's designed to be stylish and functional​. With a fantastic Hand Free tailgate function it makes using your car as easy as possible. It allows you open the boot even when your hands are full, by simply waving your foot under the rear bumper. Nice, simple and easy.

The Active Shutter Grille system on the CR-V Hybrid improves the aerodynamics and contributes to the overall quietness and comfort of the SUV.​ 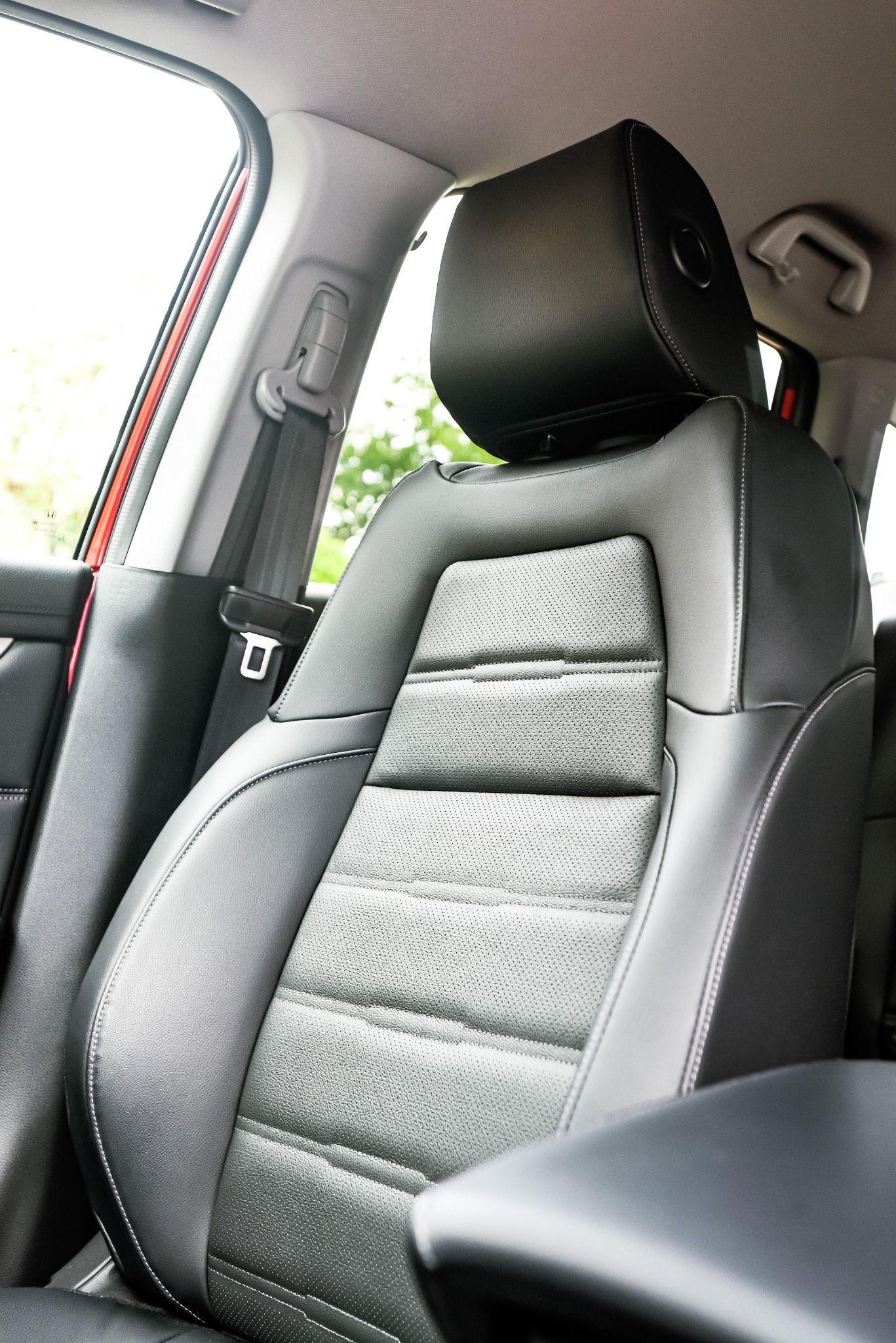 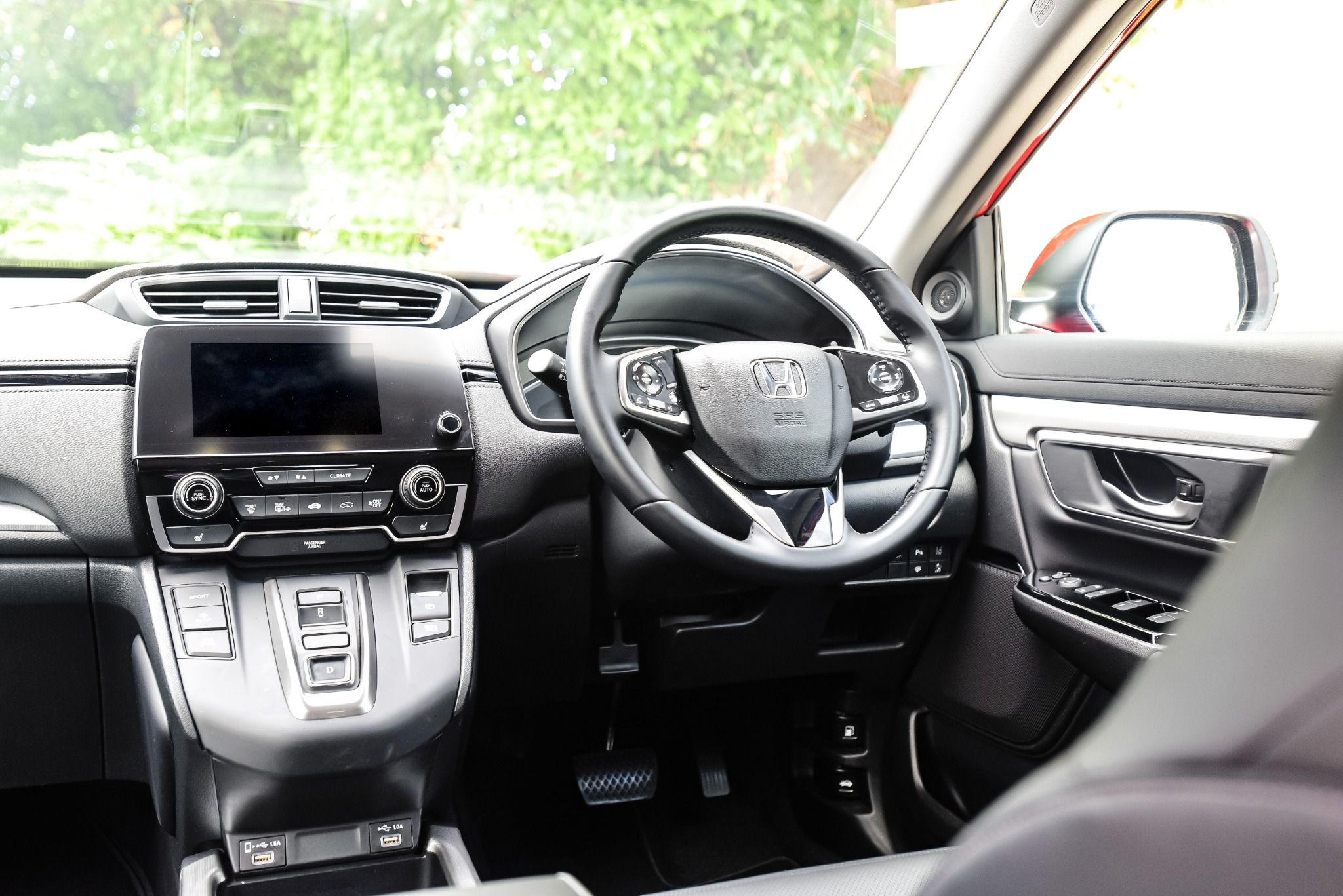 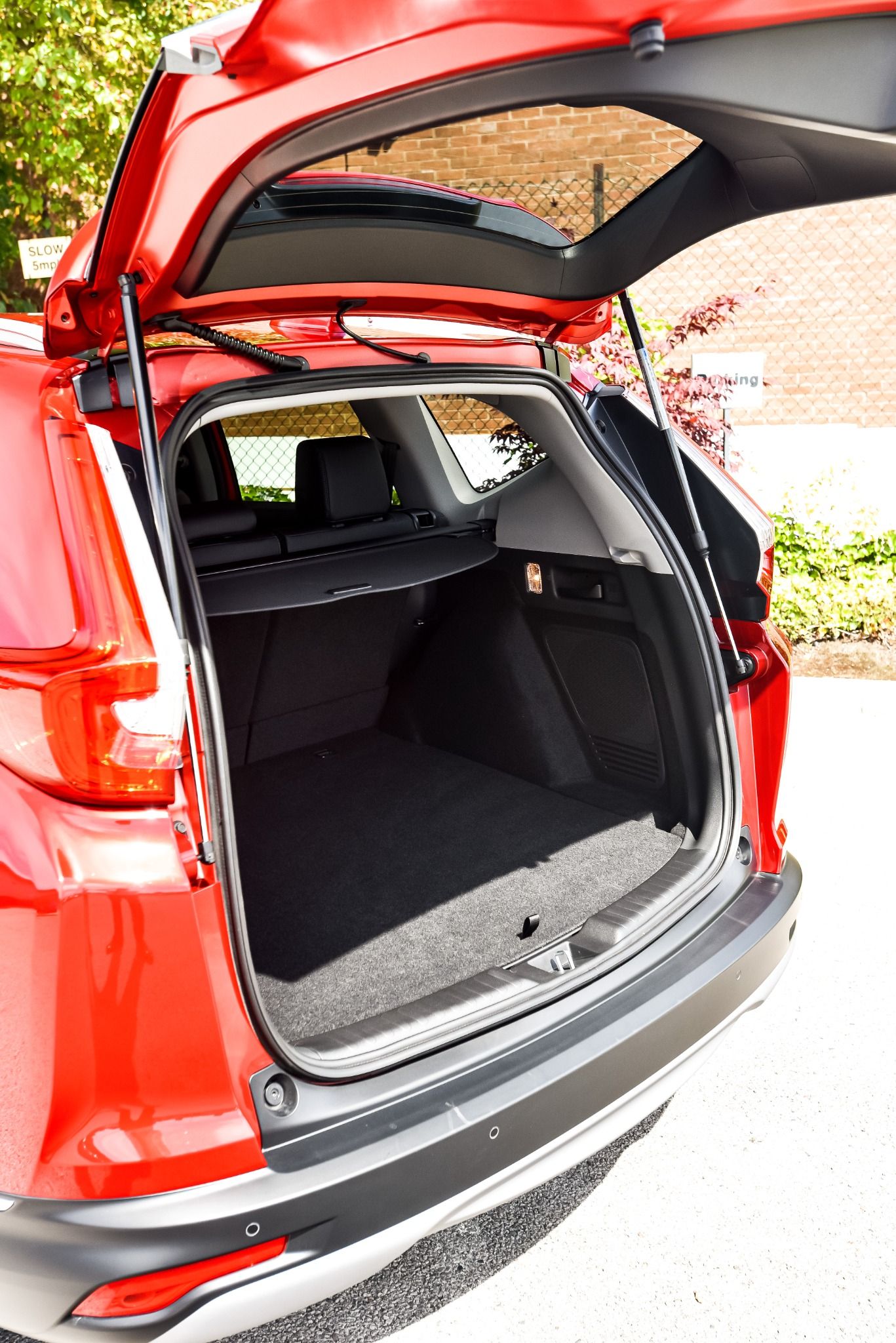 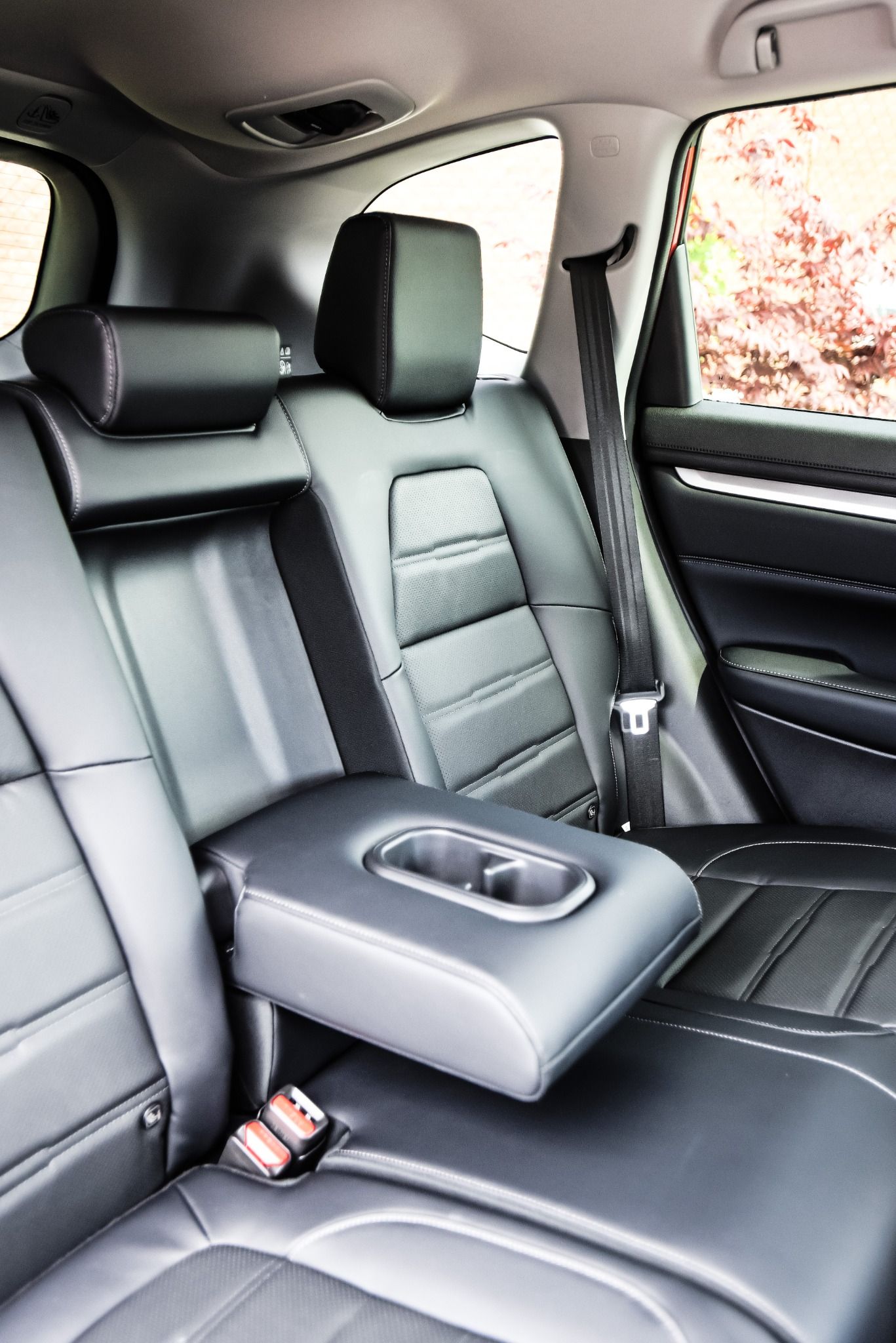 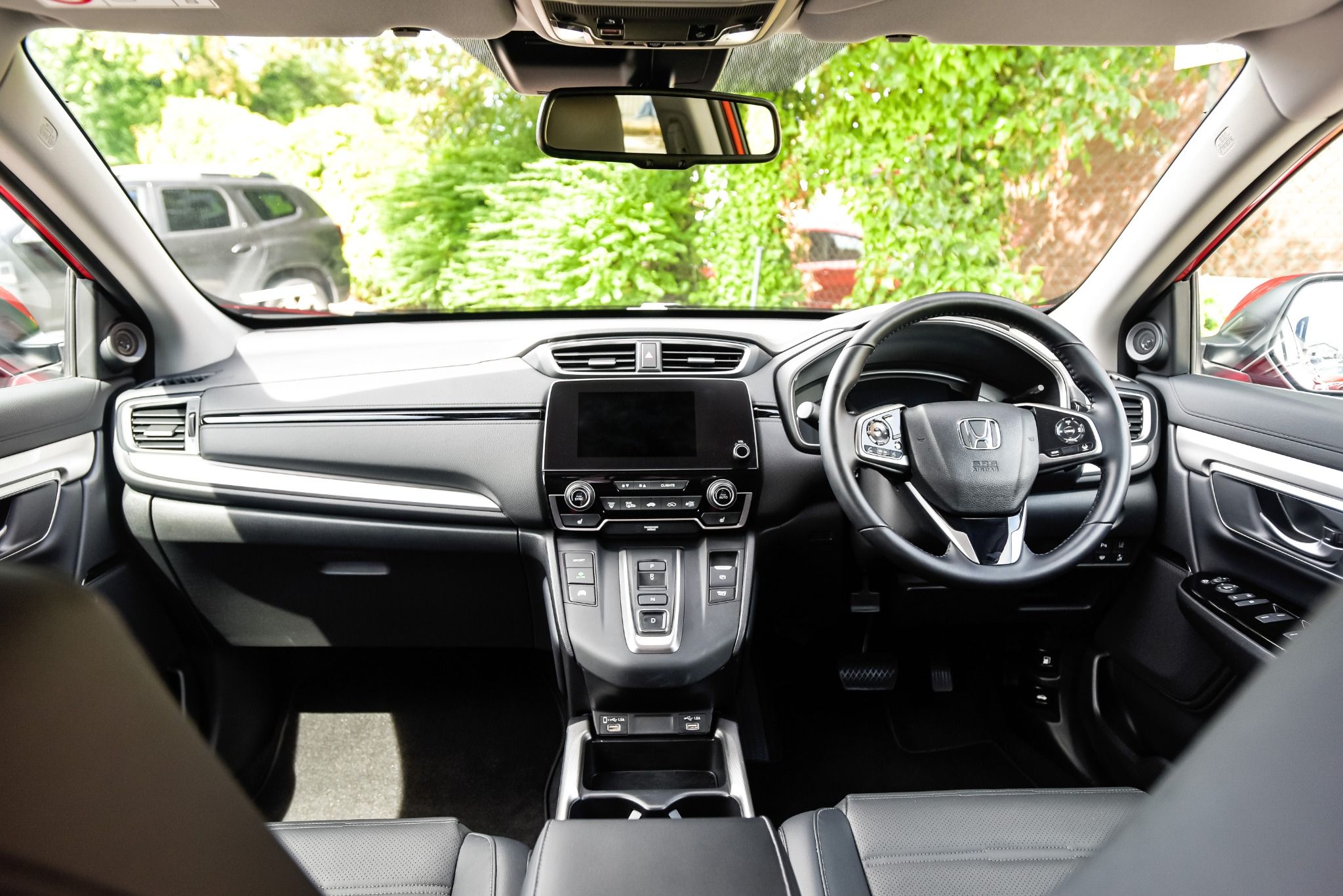 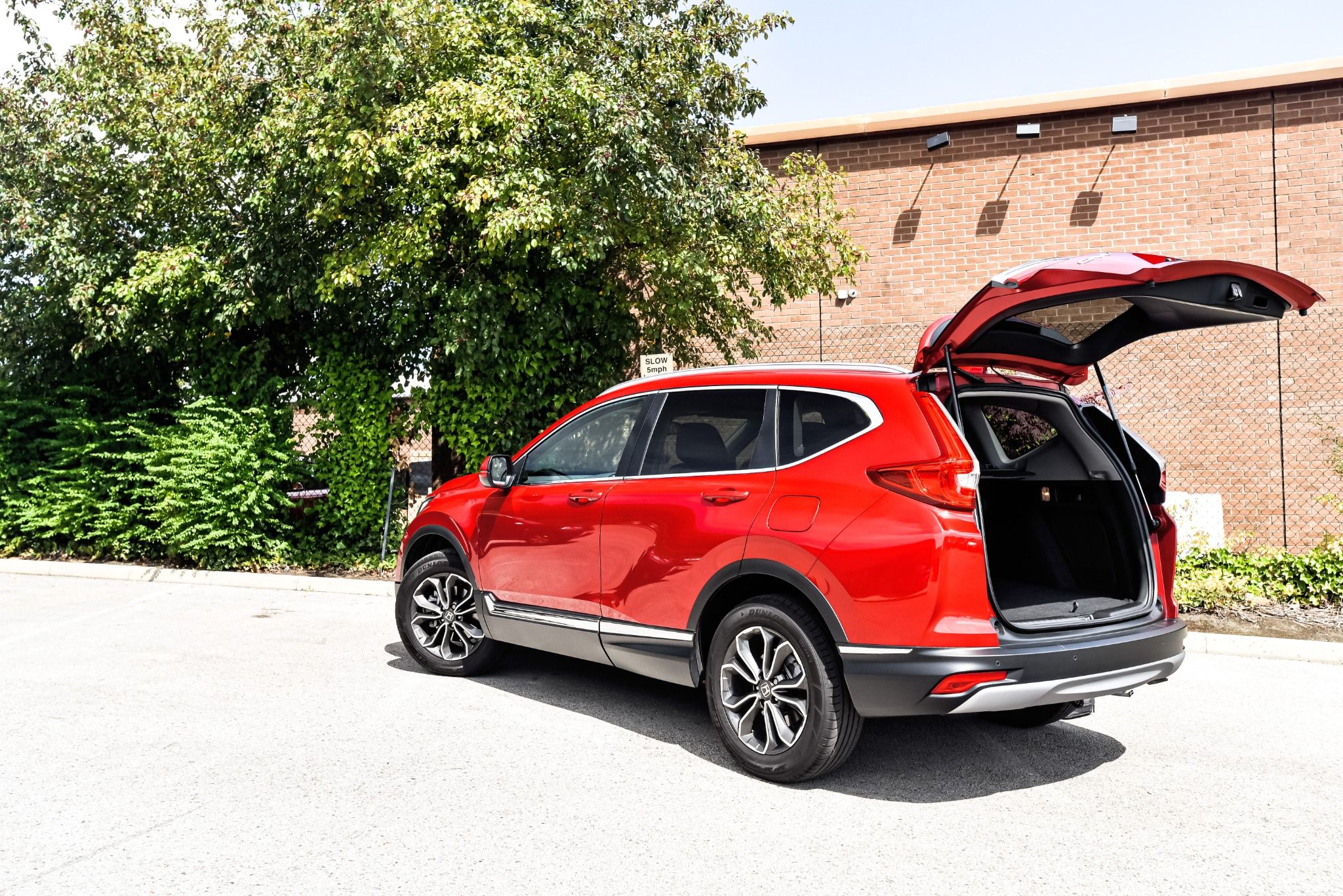 What trim levels are on the Honda CR-V Hybrid?

In addition to S trim highlights:

Hybrid proves the right choice for the Honda CR-V

Car Dealer Magazine headed out to Seville to see if this latest CR-V really can take the place of the well-rounded diesel version.

The biggest changes come under the bonnet – although we’ll get to these shortly – while there have been some other alterations elsewhere. It’s got a wheelbase that is 30mm longer than the older CR-V, and this provides better interior space. Honda has also included active aerodynamics in the car, which allows a shutter to open or close behind the grille depending on how well the engine is being cooled.

There’s even a warning sound produced by the car when driving in all-electric mode so that hearing-impaired pedestrians can know it’s coming and, of course, Honda has included a wide variety of its latest safety technology to ensure that those inside and outside the CR-V Hybrid are kept as safe as possible.

Here’s where things get interesting. You see, the CR-V Hybrid uses a far-from-conventional powertrain setup, but the fundamentals are there. Underneath the bonnet is a 2.0-litre petrol engine, along with two electric motors and a lithium-ion battery in the boot. Thanks to what Honda is calling ‘intelligent Multi-Mode Drive’, or i-MMD for short, it can seamlessly switch between power options while on the move. At low speeds, for instance, the battery powers just the electric motors that drive the wheels – the engine is kept out of the equation. You’ve got around 1.2 miles of all-electric propulsion, although when switching to Hybrid mode the engine supplies power to the electric motors, which then drive the wheels – and it can charge the battery back up, too.

Finally, there’s Engine Drive, which comes into play at higher speeds. This allows the engine to directly drive the wheels, bypassing both the battery and the electric motors. There’s no gearbox, just a lock-up clutch that transfers power depending on need. On start-up, it’s business as usual. There’s no noise whatsoever, and the CR-V silently whisks away in the manner we’ve come to expect from hybrids. Gain a little pace, and the engine chimes in seamlessly, grumbling away ever so slightly. The overall refinement is very good (it must be in such quiet cars, as even the tiniest rattles make their presence known like a swarm of solid-gold bees flying into a desk fan), and it’s helped no end by the added sound insulation material installed throughout the car – as well as Honda’s innovative new active noise-cancellation system.

Under hard acceleration the engine does produce a hefty din, but once you’re up to speed it settles down well. It’s quiet and comfortable, and the ride remains composed. Honda claims a 0-60mph time of nine seconds and it felt honest to this, as it did to the car’s claimed 51.4mpg – we saw around 48mpg on our route, which mixed motorway driving with short country road bursts.

In a time when manufacturers must create cars to stand out in what is a heavily saturated market, Honda has done well to make the CR-V look different. It’s a chunky-looking thing and that’s good, with dynamic lines running the length of the car helping to hide its overall bulk. The front headlamp design is particularly noticeable, as is the large chrome grille.

It’s also pleasantly ‘normal’. Save for a few model badges on the flanks, you’d be hard-pressed to tell that this had a cutting-edge powertrain underneath it, and that’ll likely appeal to those who don’t want to shout about the fact they’re driving a hybrid.

The cabin of the CR-V Hybrid is tried-and-tested Honda: solid and well built, if a little uninspiring. There are harsher plastics to be found, although the rubberised dash and large, chunky buttons help to give it an overall feeling of robustness. The door pockets are sizeable enough for a few bottles of water, and there are cubbies dotted throughout the cabin to help keep it clutter-free.

Rear-seat head and legroom levels are excellent, and there are twin USB sockets back there for charging devices too. Although the boot is somewhat smaller in the hybrid than the regular petrol (497 litres down from 589 litres, because of the battery taking up space), the overall area is wide, square and easy to access, thanks to a low floor and minimal load lip.

Equipment specifications for the CR-V Hybrid mirror those available on the petrol version, so buyers can choose from S, SE, SR and EX versions, as well as the option of either two- or all-wheel drive.

The latest generation of Honda’s infotainment system still lingers somewhat behind rivals’ both in terms of ease of use and look, although the standard fit of Apple CarPlay and Android Auto goes some way to alleviate this issue.

Honda believes this hybrid CR-V to be a fair replacement for its popular diesel version and we’d have to agree. During our test route it delivered similar economy figures to the oil-burner, and when you factor in the lower cost of petrol at the pump, it means that potential buyers could see themselves saving a little more when filling up.

It’s also only going to cost around £800 more than the standard petrol version, which makes it excellent value when you consider the amount of technology residing under the bonnet. All in all, the CR-V Hybrid would be an excellent proposition for those looking to drive down fuel costs without making too many sacrifices in terms of overall driving experience.

You can get in contact with one of our Honda dealerships by calling either:Honda Bolton or Honda Stockport

Enquire about the Honda CR-V Hybrid