The most luxurious in the A4 range, the S4 Saloon is practical and comfortable with a sporty advantage. Its 3.0-litre supercharged V6 engine is more fuel-efficient than ever and will take you where you need to go fast.

Much like the A4 Saloon, the S4 Saloon has a sleek design that’s generous in size. Sports logo detailing in the door frames and the front grille make it clear this is the more athletic version, enhanced further by the metallic skid plate on the bumper. Dual oval twin tailpipes are another indicator of its sporty nature. 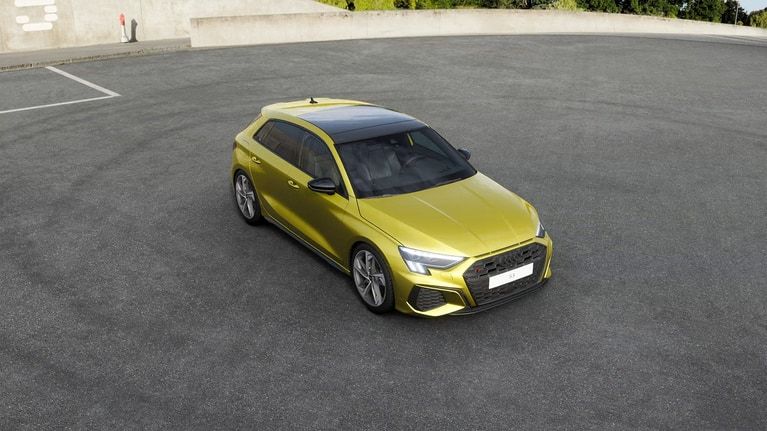 The interior design strikes the perfect balance between practicality and luxury. In total, the boot has 480 litres of space and the same generous height and legroom as the A4. Everything you need to know is in your line of sight thanks to the digital display. This innovative technology has the capacity to show the speed and rev counter, navigation, the fuel level and technical information. Audi’s MMI infotainment system comes as standard, giving you easy use of your phone and selected apps.

A colour screen sits in the centre of the dashboard and provides use of the radio and CD player. With a CD changer that can hold six disks, a SD memory card reader, USB connection and AUX-IN, you can play any song or album that suits your mood. For a more powerful soundtrack, opt for the Bang and Olufsen sound system which has 14 speakers and dynamic noise compensation which adjusts the volume to the engine revs.

Safety technologies like ABS and stability control come as standard and you can choose a number of extras. These include the Audi Parking System Plus which lets you know when you are nearing obstacles while parking through audible alerts and visual signs on the screen. Then there is the Audi Side Assist which monitors your blind spot to help you pull out What trim levels are on the Audi S4 Saloon?

Black Edition trim highlights in addition or replacement to S4 include:

Vorsprung trim highlights in addition or replacement to Black Edition include:

An all-wheel drive with sports suspension, the S4 Saloon is responsive and agile on all roads.

The turbocharged 3.0-litre V6 petrol engine has an eight-speed automatic gearbox for a fast yet carefree drive.

The S4 Saloon accelerates from 0 to 62 mph in an impressive 4.6 seconds, Pure athlete performance Audi says the motive to go diesel is based on the success of the old SQ5, which was offered originally as an oil-burner. But can a diesel engine deliver the thrills required from a performance-oriented model?

If you hadn’t guessed already, it’s the engine that’s the highlight – a new 3.0-litre V6 diesel.

Replacing the pre-facelifted S4’s 3.0-litre petrol engine, this new powerplant aims to maximise performance and efficiency. To help with that, it features a 48-volt mild hybrid setup that can recuperate charge when decelerating

Alongside the standard update received by the facelifted A4, the S4 gains its own ‘S’ specific look. This is most obvious in the new R8-inspired front end, which gains new slats between the front bumper and bonnet. A revised version of the digital cockpit, and a sportier-looking cabin also separates this from the standard A4.

A new high-spec Vorsprung grade also joins the line-up as the range-topping version.

This is the first S4 to feature a diesel engine under the bonnet. It produces 342bhp and a monstrous 700Nm of torque, allowing for a 0-60mph time of just 4.6 seconds and an electronically-limited top speed of 155mph. Power is delivered to all four wheels via an eight-speed S tronic automatic gearbox.

Yet, despite all this performance, the S4 is still capable of averaging a claimed 40.4mpg, with CO2 emissions of 166g/km.

The engine is a superb match for the S4, delivering rapid acceleration at all speeds. The typical diesel grumble doesn’t feel particularly racy, but a good exhaust note (real or otherwise) at least helps to mask that.

But as with other recent Audis – the automatic gearbox is the weakest link. While smooth, it offers a slight delay under heavy acceleration, which isn’t ideal for a performance car. Audi has a long history of producing stable, yet rapid performance models, and this recipe continues to apply to the S4.

The quattro all-wheel-drive system results in astonishing traction, meaning that even when the S4 is being pushed, its feathers rarely feel ruffled. However, there’s a slight rear bias to the power delivery, which means that an element of fun can be had when the S4 is really pushed.

It’s also a very easy car to place through the corners, and even if the steering is rather absent of feel, it doesn’t really tarnish the experience. It might lack the aural drama you’d expect from a performance car, but for a rapid saloon, this car more than delivers. A comfortable ride and excellent refinement also make the S4 a fine cruiser.

The standard A4’s new grille and signature LED lights give the model a unique presence on the road, and that’s taken a step further with this model’s S-specific styling kit.

The S4’s new nose and the slats underneath the bonnet are proving to be controversial – just as it did on the A1 and R8. But as a way of differentiating it from the standard A4, we rather like it. Elsewhere, matt grey detailing, a gloss black honeycomb grille and four chrome exhaust tips help to give the S4 a subtle performance pedigree, which will appeal to those who value understated performance.

The new Turbo Blue paintwork fitted to our test car might not be quite so understated, though it’s certainly the highlight of an otherwise quite bland colour palette.

Given the cheapest S4 is expected to cost a fraction under £50,000, there is a strong expectation for the S4’s interior to deliver. And buyers won’t be disappointed, as the S4’s cabin is filled with high-quality materials.

Audi has also done a decent job of changing the inside of the car to reflect the extra sportiness of the powertrain. Alongside the typical array of ‘S’ badges and token Alcantara, it benefits from lashings of carbon-fibre trim throughout the cabin, along with revised dials in the Virtual Cockpit. Figure-hugging Nappa leather seats also offer a perfect balance between sportiness and luxury.

The new 10.1-inch touchscreen is a vast improvement over the last car’s system, and it works well with the standard-fit 12.3-inch digital dials and the head-up display – the latter fitted to range-topping Vorsprung models.

The S4 is generously equipped as standard, with the base model coming with a Nappa leather interior, 19-inch alloy wheels, electric sports seats with a massaging function and a digital cockpit to name but a few features. This at least makes the £48,000 starting price more palatable.

The Black Edition, unsurprisingly, adds a whole host of black accents across the exterior and interior, with this costing an additional £1,500.

The new range-topping Vorsprung grade is a rather steep jump in price – costing from £60,850. In its defence, it adds a whole host of kit, such as Matrix LED headlights, adaptive cruise control, heated rear seats and adaptive dampers. The latter is a worthwhile piece of kit, but we would recommend adding it as an optional extra on the standard S4 and save £10,000 over the Vorsprung car.

It might have seemed a short-sighted move to make the new S4 a diesel-only model in the UK (other markets will continue to get the petrol) but once the engine’s superb torque and acceleration is revealed, the idea of a diesel performance car begins to make sense.

The engine’s grumble might juxtapose with the idea of a premium performance car, and we’re in no doubt that the upcoming BMW M340i will likely be more involving to drive. But as a rapid sports saloon that won’t cost you a fortune to run and offers a class-leading interior, the new S4 makes a lot of sense.