When it comes to outright sledgehammer-style performance, Audi’s RS6 Avant Performance has historically been one of the best. The previous-generation RS6 made a name for itself as an estate car with supercar performance, and now the new one is here to take up the mantle.

Let’s take a look at this new high-performance estate car in a bit more detail.

The exterior of the RS6 Avant Performance is big, imposing and represents a significant departure from the relatively discreet design of the standard A6 Avant. Wide arches and a wide track give the RS6 a real motorsport-inspired look.

Around the back, there’s an ultra-wide diffuser which is framed by equally massive exhaust pipes. There’s a lot of theatre to the RS6’s Performance design, that’s for sure. 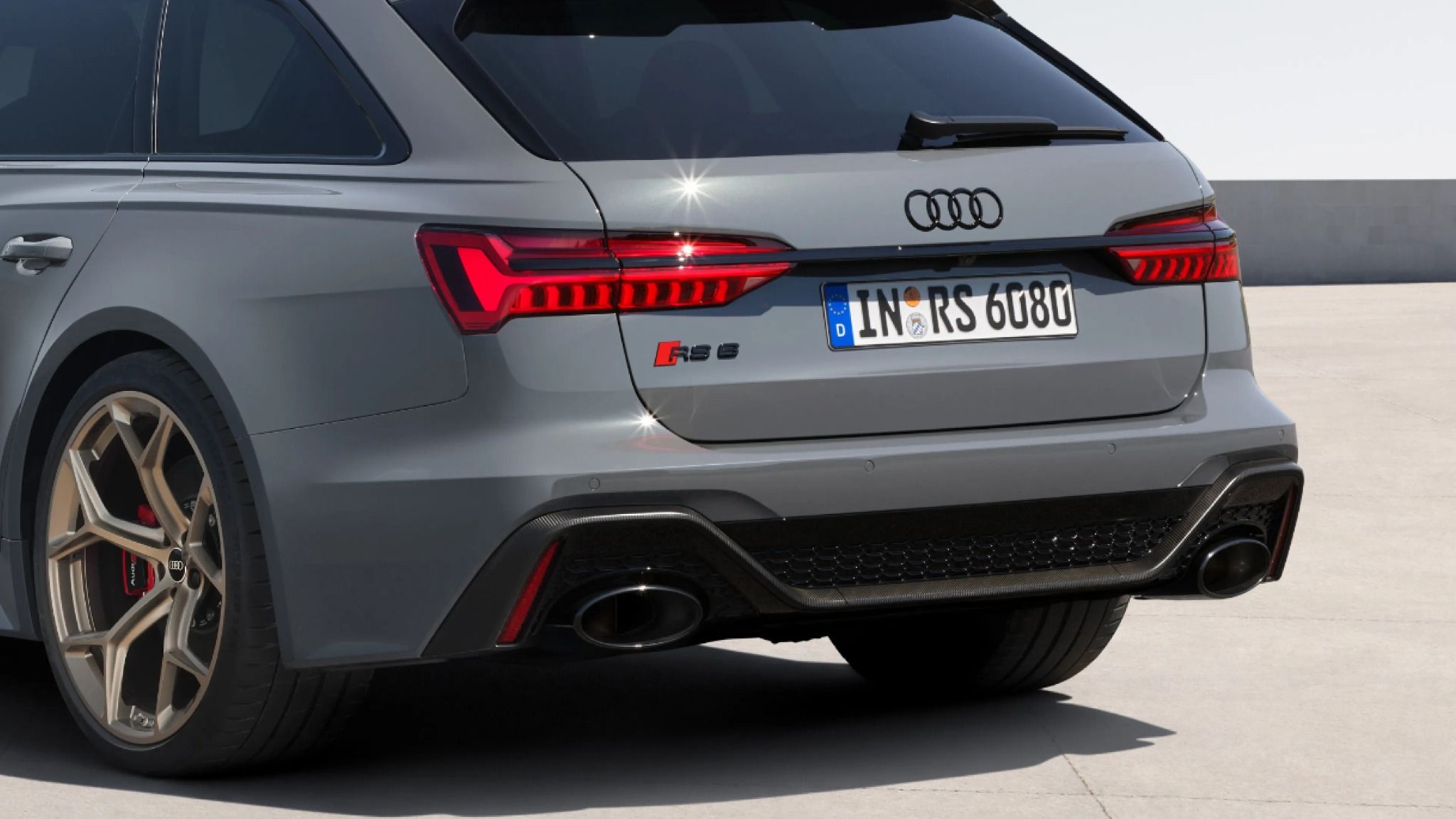 The RS6 is based on the latest A6 and, as a result, boasts Audi’s very latest interior layout. It’s spacious, well made and well designed too with plenty of storage options designed to help keep the cabin clutter-free. Of course, being an RS model means the RS6 Performance gets more performance-orientated touches such as sports seats and a sports steering wheel.

The practicality is still there, however, with a 565-litre boot providing more than enough space for most occasions. This can be increased to a healthy 1,680 litres by folding the rear seats down.

The RS6 benefits from Audi’s latest technology architecture, which sees a twin-screen setup used in the centre of the cabin. Up top, there’s a main infotainment screen that controls media and satellite navigation, and this is joined by a smaller screen underneath which deals with heating and ventilation.

It helps to give the RS6 Performance a distinctly upmarket, clean feel, and thankfully the screens are just as good to use as they are to look at. 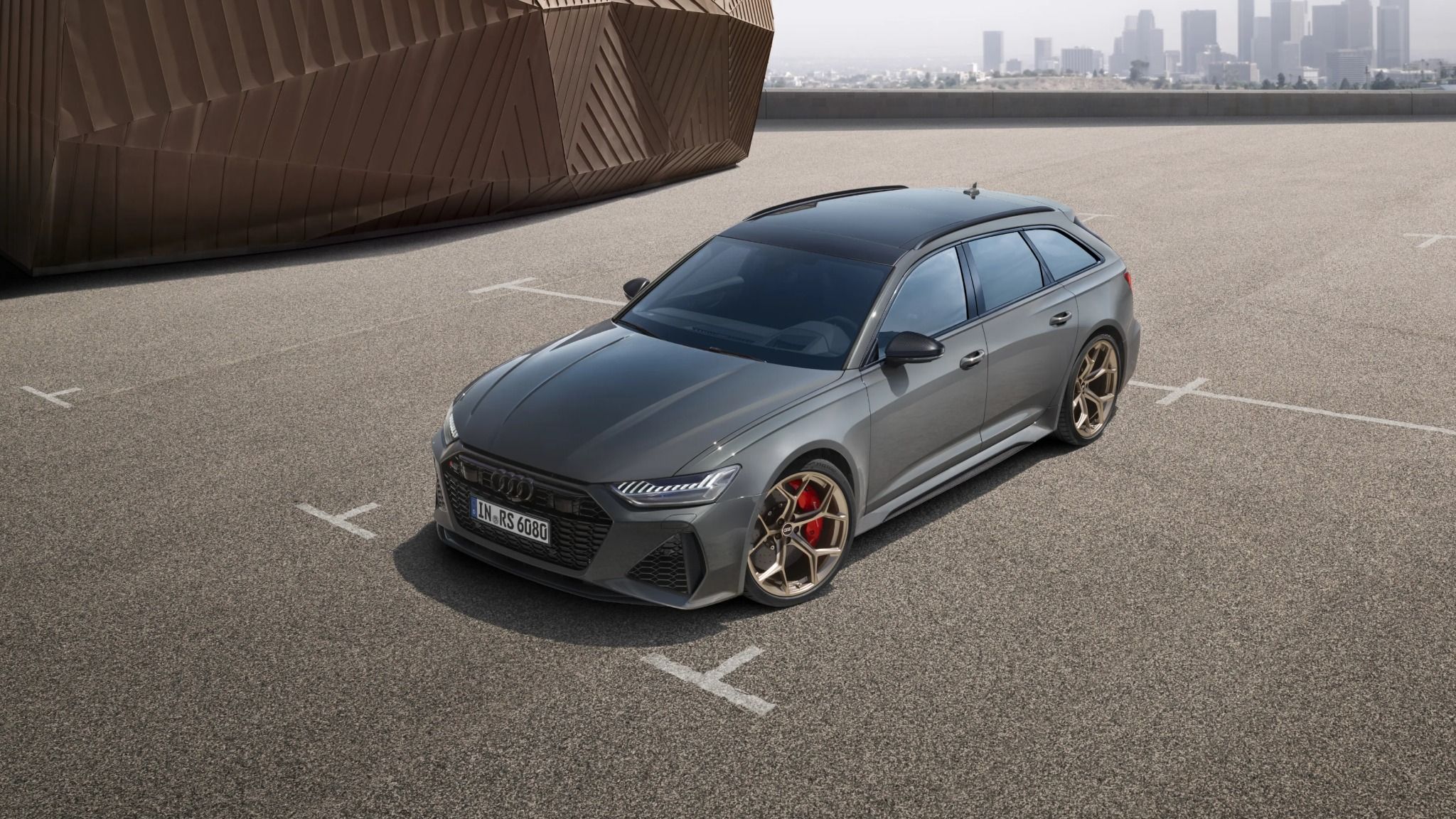 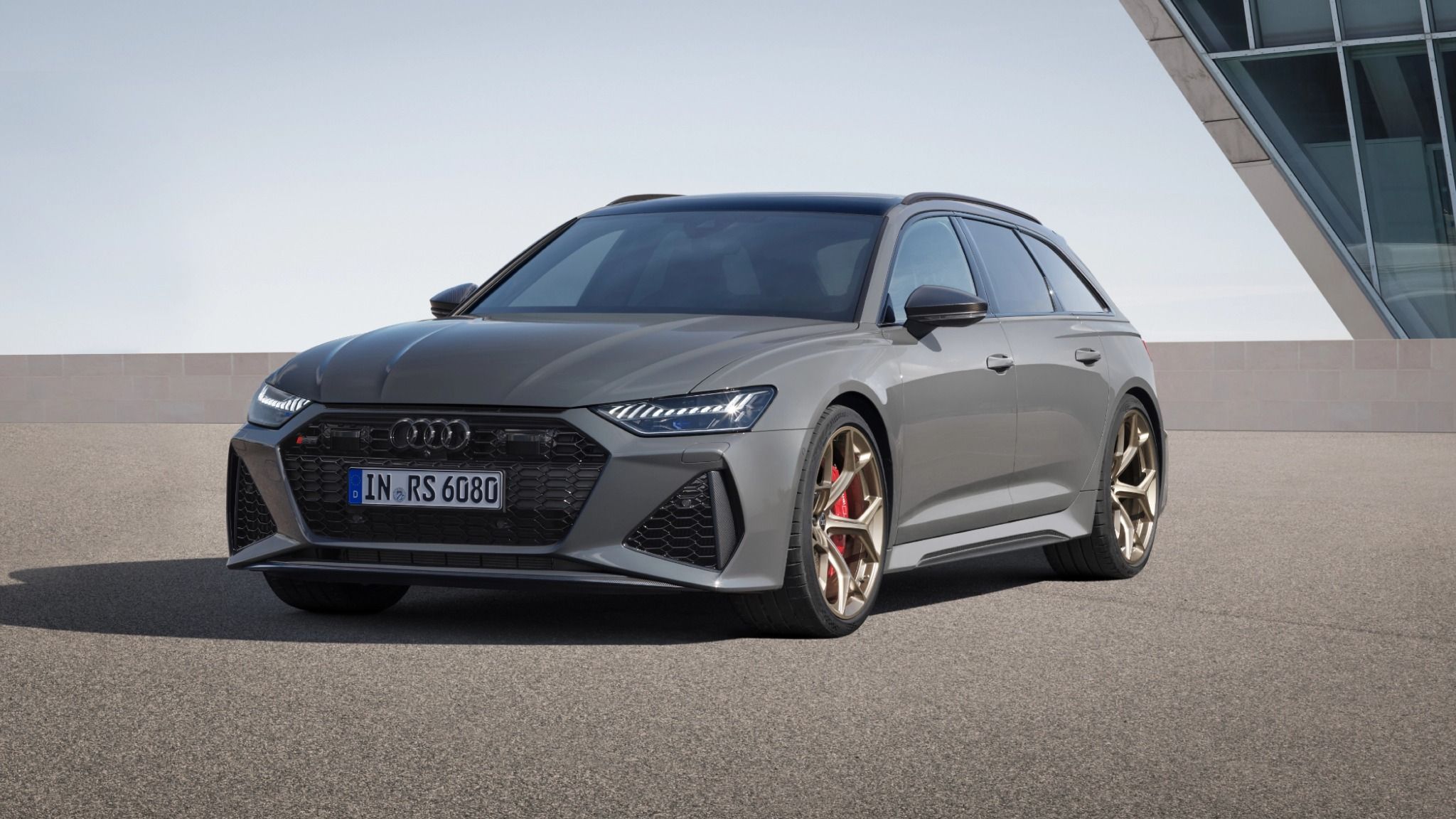 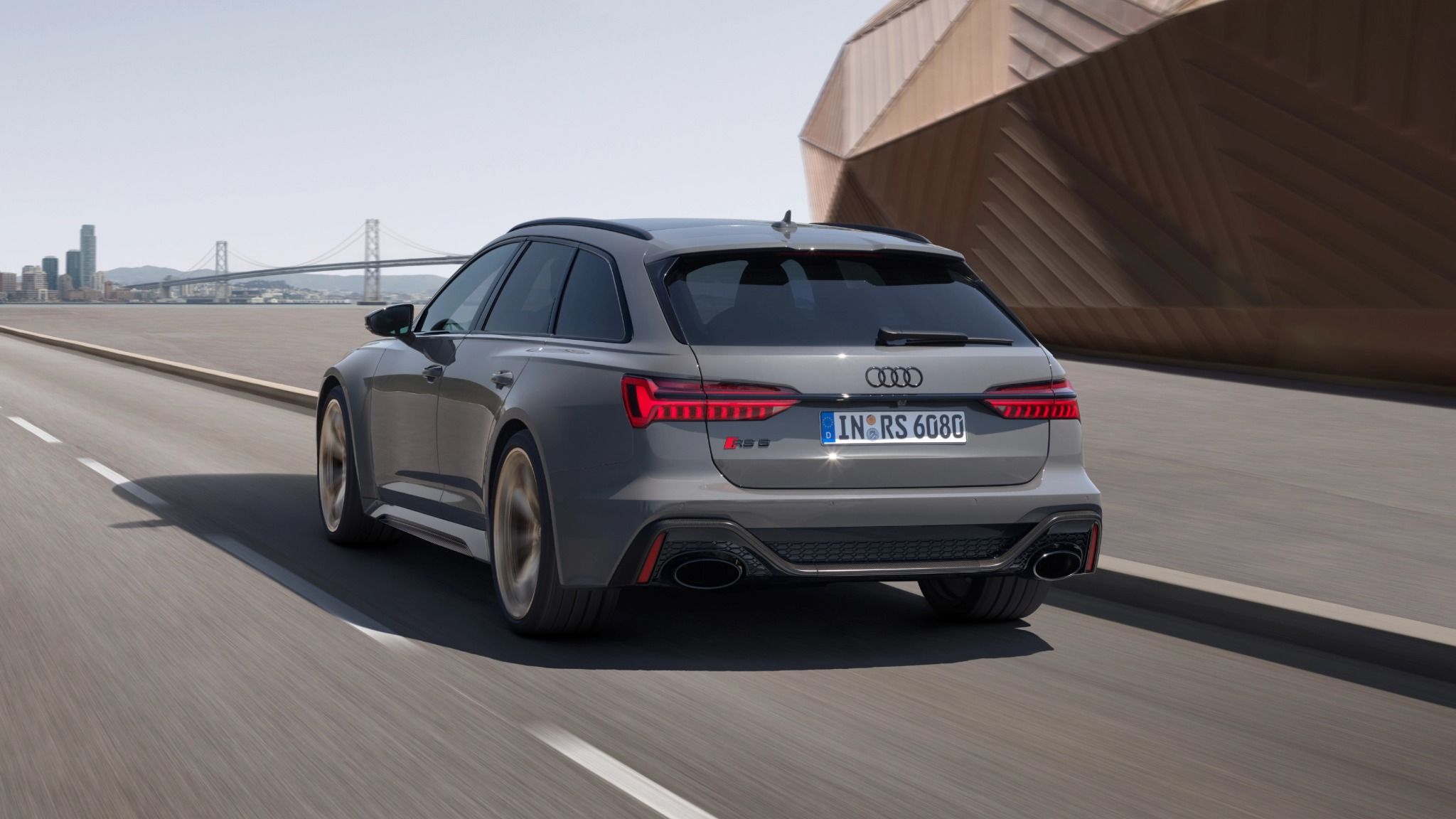 What trim levels are on the Audi RS6 Avant Performance?

The RS6 Avant Performance packs a punchy 4.0-litre turbocharged V8 which sends its power to all four wheels via Audi’s quattro all-wheel-drive system. In total, there’s an astounding 621bhp and 850Nm of torque, which is enough to send the RS6 Avant Performance from 0-60mph in just 3.4 seconds. Its top speed is restricted to 155mph.

However, despite that headline-grabbing performance the RS6 is beautifully refined on the motorway and is just as adept at travelling long distances as it is wolfing up corners at speed. Audi’s RS 6 Avant has always been the ideal everyday performance car – so what is this all-new version like? Jack Evans finds out.

When it comes to fast estate cars, there are few in the business who have historically done it quite so well as Audi. The Porsche-developed RS 2 broke the mould for what could be done to a wagon, while subsequent RS 6 models like the C5 generation of 2002 or the V10-powered C6 of 2008 continued to showcase the brand’s ability for taking a practical estate car and turning it into something truly potent.

The previous-generation RS6 – the C7 – was introduced back in 2013 and continued right the way up to 2018, placing its stake in motoring history. Now there’s a new one – so can it live up to all this pressure? We’ve been to find out.

There’s been some deep reworking of the RS 6, but the fundamentals stay crucially the same. We’ve got the long, practical shape of the current-generation A6 Avant, a big, powerful turbocharged V8 up front and drive going to all four wheels. It’s a recipe which went down well with the old RS 6, so you can see why Audi has retained it.

But to dismiss this as a mere facelift is to go awry because there’s a lot of clever new tech working away here. The engine is cleaner but punchier than before, we’ve got a mild-hybrid system to help with efficiency and there’s all-wheel-steering to aid with sharpness too.​ The RS 6 uses a twin-turbocharged V8 engine feeding drive to all four wheels through Audi’s quattro system. The figures are predictably ludicrous for what is still a useable estate car; 592bhp, 800Nm of torque (up 100Nm on its predecessor), 0 to 60mph in 3.4 seconds and 155mph flat-out – with the option to raise that to either 174mph or 189mph depending on how much you want to spend.

Audi has also integrated its 48-volt mild-hybrid system too, which allows the car to ‘glide’ – or coast with the engine effectively switched off – at speeds of up to 99mph. It also means that the start-stop system will kick in from 13mph, further shaving valuable fuel consumption. Even so, this is still a big, heavy V8-powered estate, so you’re still only looking at up to 22.6mpg combined and CO2 emissions of 263g/km.​

It’s a car with two distinct characters, the RS 6. The one, being serene and quiet, means that the RS 6 transforms the longest of journeys into short little blips, effortlessly gobbling away the miles with the ease of a standard A6 Avant. Our car, on standard air suspension, soaked up the road imperfections while isolating road noise impressively well. Only the slight rumble of the V8 gives any indication that there isn’t some cooking-grade diesel under the bonnet.

Yet when it needs to be, the RS 6 can be truly unhinged. With RS driving modes engaged – accessed via an all-new shortcut button on the steering wheel – the whole car tightens up. The all-wheel-steering means it feels far nimbler than the car it replaces and though the V8 may not sound quite as devilish as before, it still provides more than enough aural theatre.​

This latest RS 6 is a far more aggressive car than the one it replaces from nearly every angle. The wheel arches – 80mm wider than a standard A6 – give it a whole lot of presence, while the huge front grille dominates the ‘face’ of the car.

We distinctly enjoyed the undercover nature of the older RS 6 – remove the badges, and few would’ve been able to distinguish it from the regular model – but there’s little chance of that happening here. It’ll appeal to those who want to stand out, but those drivers who appreciated the previous RS 6’s somewhat under-the-radar appearance may find this latest one a touch over-the-top.​

The interior of the current-generation A6 is one of the best in the business, so it’ll come as little surprise that the cabin of the RS 6 is just as good. Added touches such as sports seats and a sport steering wheel, but on more entry-level cars it feels much the same as the standard car’s.

That’s no bad thing – and the ergonomics remain spot on – but you could feel that at times there’s not enough drama inside for a car costing over £90,000 base. It’s only when you go higher up the trim levels – to specifications like Vorsprung Edition – where you get high-end features like an Alcantara steering wheel and sportier seats, which do help to elevate the overall feel of prestige in the interior.

Being Audi’s range-topping estate car, the RS 6 gets almost all the bells and whistles that you could think of. There’s a full Virtual Cockpit setup with RS-specific dials, which integrates readouts such as speed, torque, engine output and g-forces – among others – all into one display ahead of the driver.

It’s backed by a 10.1-inch display in the centre of the cabin which incorporates media and navigation functions, followed by a second 8.6-inch screen underneath which is your main point of control for heating and ventilation. It’s an extremely tech-heavy cabin, and those looking for a more analogue experience may be left feeling a little over-screened.

As we’ve already mentioned, this new RS 6 had a whole heap of expectation on its shoulders. Thankfully, it has more than lived up to it. It’s sharper than before without having lost that all-important refinement which allows it to chew through the miles, and it has somehow improved on the already excellent fit-and-finish exhibited in the older car. Expensive it may be, but if you want a performance car for every occasion, the RS 6 remains the one to have.