A finely tuned performance vehicle that reacts fast, making you feel in control and safe. Both agile and responsive, the RS 4 Avant features a lightweight 450PS V6 engine and quattro all-wheel drive with Sport differential capable of getting you from 0-62mph in just 4.1 seconds. With RS Specific Audi Virtual Cockpit and a 12.3" all-digital display, you are completely in control behind the wheel. Feel the comfort of the RS Super Sports seats with contrast honeycomb stitching and fine Nappa leather. The front seats also benefit from pneumatic massage function and heated function.

The RS4 Avant has been a longstanding example of what Audi does best. It’s fast, practical and accomplished in all weathers thanks to the inclusion of the firm’s much-loved quattro all-wheel-drive system. Let’s take a look at this performance icon in a little more detail.

The interior of the latest RS4 Avant has plenty of Audi’s trademark cabin-making cues; it’s well built, features plenty of high-end materials and incorporates plenty of connectivity options too. It’s practical, of course, with that estate layout affording the RS4 with plenty of luggage space. In fact, there’s 505 litres of space back there, which can be extended by folding down the rear seats.

The boot opening itself is square and easy to access, which should make loading larger items into the back a bit easier.

When it comes to exterior design, the RS4 Avant is a great example of how to make a car look purposeful without appearing too over the top. The trademark RS touches are there, such as the silver wing mirrors, while at the rear a set of four exhaust pipes give quite an obvious cue to the car’s performance.

A recent update brought sharper rear lights which are sleeker than those on the previous RS4, while the headlamps have been finessed too.

There’s plenty of in-car technology to make use of in the RS4, with a 12.3-inch digital cockpit one of the main, and most impressive, systems in the car. It replaces the conventional dials, and is easily configurable too, allowing you to tailor the screen to show a variety of different readouts.

In the middle is a 10.1-inch infotainment screen which houses all of the main media functions as well as features such as satellite navigation. What trim levels are on the Audi RS4 Avant?

In addition or replacement to the standard RS 4 Avant specification, Carbon Black highlights include:

In addition or replacement to the standard RS 4 Avant specification, Vorsprung highlights include:

Only 75 exclusive limited edition Audi RS4 Competitions will be produced for the UK, don't miss your chance to get even closer to the track, with impressive performance enhancements.

Enquire about the Audi RS4 Competition 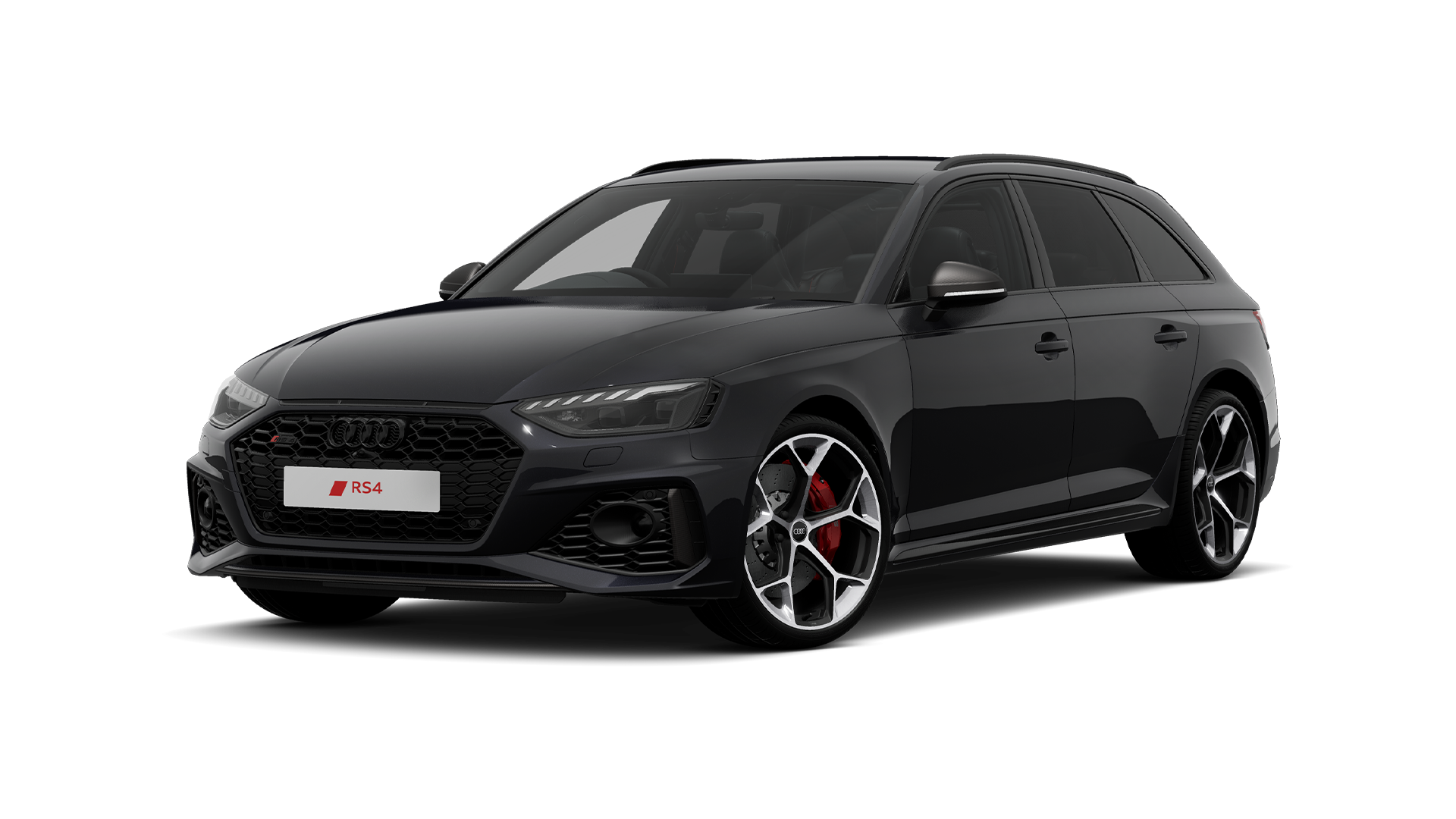 Should I buy an Audi RS4 Avant?

Want to get from 0-60 in less than 4 seconds, but still have room for adults to sit comfortable in the rear and still have room in the boot for s supermarket 'big shop', then look no further than the the Audi RS4 Avant:

What’s the latest on the Audi RS4 Avant?

So here it is – the latest incarnation of Audi’s renowned RS4 Avant. Lighter and more powerful than ever, it promises to be pretty much all the car you could ever want or need. Now featuring a lighter twin-turbocharged V6 engine rather than the previous generation’s V8, it’s more efficient too – though with 443bhp to play with it’s still got plenty of punch.

Not only is its economy better than before, but it’s more practical than that older car – making it ideal for family drivers who don’t want to forsake performance in the quest for better space.

As you’d imagine with 443bhp on tap, the RS4 Avant is pretty electrifying to drive. Power delivery is extremely linear and predictable, with very little noticeable turbo lag. The eight-speed gearbox’s shifts are smooth in automatic mode and impressively sharp when in manual. Of course, thanks to the inclusion of quattro all-wheel drive, there’s lots of traction too.

One slight negative is the ride – or should I say our poor road surfaces. Here’s where the options come into play. In regular form, the RS4 Avant’s ride is just a little too hard for UK roads, with imperfections in the road causing the car to jostle about; however, we tested a car with optional dynamic chassis control, and this transforms the RS4 Avant, making it pliable enough, even for British B-roads – a box well worth ticking, in our eyes. As mentioned, some big changes have taken place under the skin. That new V6 offers up better performance than before, while a range of exterior changes have been made too. It’s longer, wider and lower than its predecessor, yet weighs less. Boot space is also improved and it’s larger than any of its rivals on the market today.

Inside, it benefits from latest Audi cabin architecture, including its Virtual Cockpit driver-focused infotainment system – one of the best out there. It all feels fresh and modern, and comes with more character than the RS5, with which the RS4 shares many components.

What’s under the bonnet of the Audi RS4 Avant?

The new RS4 Avant is powered by a twin-turbocharged 2.9-litre V6. Here, it produces 443bhp and 600Nm of torque. It’s that final figure that contributes to the car’s impressive 0-60mph time of just 3.9 seconds. Power is sent via an eight-speed single-clutch transmission to all four wheels, ensuring excellent traction levels in all conditions. Those turbochargers are also mounted inside the ‘V’ of the engine, which contributes towards better economy as well as sharper power delivery.

Despite the impressive power outputs, Audi claims that the RS4 Avant will return 32.1mpg on the combined cycle when fitted with 20-inch alloy wheels, while emissions stand at 200g/km CO2 – neither of which is particularly bad when you consider the car’s performance.

The Audi RS4 Avant has, through its many incarnations, been a masterclass in how to make a car look purposeful yet understated. This latest car is an extension of this, with only a few exterior touches making it look out of the ordinary.

Though considerably more beefed up than the regular A4 Avant, the RS4 doesn’t look over the top. A large splitter sits at the front while a gloss black diffuser sits between two large oval exhaust pipes at the rear – and that’s about it in terms of sporty styling. No OTT bling to see here.

The RS4 Avant certainly looks its best in darker colours and now comes with the option of milled alloy wheels – something you’ll only find on high-end supercars. Pick these if you really want to stand out from the crowd.

As you’d expect from an Audi-made product, the interior of the RS4 Avant is very well made indeed. There are all manner of high-quality materials used throughout the cabin, combining to create an exceptionally well-put-together space. The seats are comfortable and supportive, while there’s plenty of adjustment too – you can get nice and low in the car, while the steering wheel can be tailored for rake and reach.

Rear-seat legroom is pretty good too, even behind the driver. Headroom isn’t restricted, either, despite the sloping roofline, and there’s no reason why anyone should complain when sitting in the back of the RS4 during a long journey.Boot space is good as well, with the ability to lower the back space making for more flexible storage.

Given the RS4’s £62,175 starting price, you’d expect there to be a good amount of standard equipment and, thankfully, it delivers on this front. Audi’s Virtual Cockpit digital instrument cluster is included as standard, as is a 180-watt 10-speaker sound system. Sports front seats trimmed in nappa leather are included, even on standard-spec cars, too.

Audi is releasing a Carbon Edition specification from launch, which adds matrix LED headlights, RS sports exhaust and a range of carbon-fibre styling additions to the car – though bumps up the starting price to £72,175. As we mentioned, adding Dynamic Chassis Control is something we’d highly advise. It’s expensive at £2,000, but is an option that completely transforms the character of the car.

Any RS Audi estate car needs to be practical, blisteringly quick across all surfaces and understated too. The RS4 Avant ticks these boxes, providing an invigorating drive alongside genuine everyday usability. It’s also very well made inside, with plenty of standard equipment and high-quality materials justifying its price tag.

With just a few additional options – the adaptive dampers really are a must-have – the RS4 Avant quickly becomes the ideal day-to-day sports estate, and is certainly one you won’t regret getting your hands on.