The new Audi R8 interior remains mostly unchanged however inside the cabin there are now new colour and stitching options to choose from. Giving you further opportunity to personalise the car to make the new R8, your new R8!

A racecar-inspired flat-bottomed steering wheel greets you as you step inside. It’s not just for show – it’s a multifunction wheel with which you can control the car’s driving characteristics.

The rest of the cabin is beautifully crafted and minimalist in design: Audi want you to focus on the road and enjoy the driving experience. The supportive seats are extremely comfortable, and bucket seats that really hold you in place (standard on the Plus) will make it even easier to enjoy the drive. 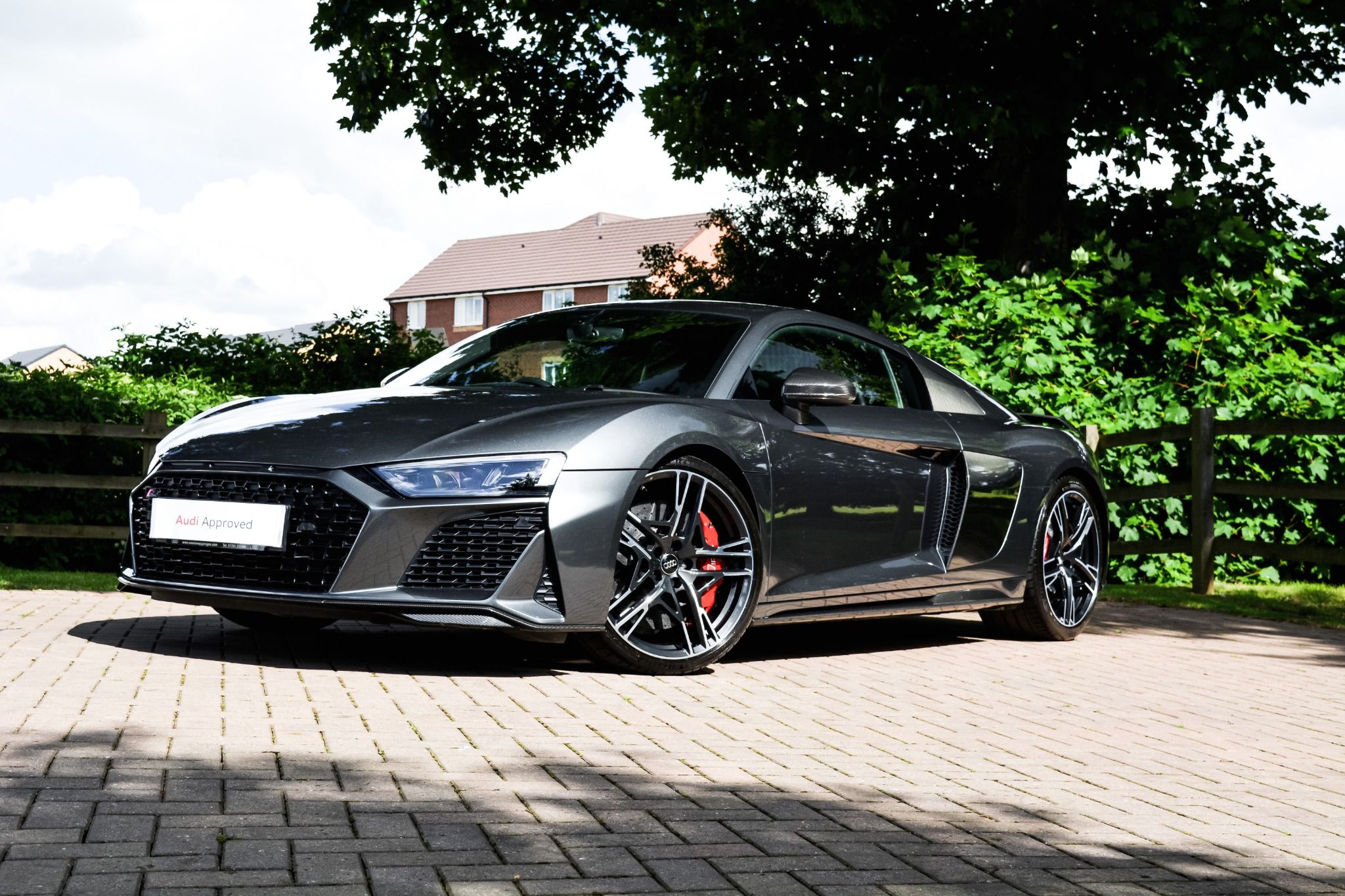 If you’ve ever seen an R8 coming down the road towards you, you know it means business. Squat, aggressive and yet impressively lightweight, it looks every inch the Audi TT’s more intimidating big brother.

The New R8 now has a redesigned lower and wider looking front grille with the honeycomb effect. Other accents of the car now feature a darker look such as darker headlights with black trimmed surrounds as well as new spoiler wraps.

The new R8 features the impressive Audi Virtual Cockpit, which replaces the traditional analogue dials with a giant 12.3-inch TFT panel that displays everything from speed and revs to instructions from the satellite navigation.

Much can be controlled by Audi’s intuitive and easy-to-use MMI system that sits between the seats, including the impressive standard-fit audio equipment. Everything is set up to connect your R8 to your Bluetooth®-enabled smartphone to ensure the ultimate soundtrack is always on hand.

Tyre pressure indicators will let you know if there’s a drop in pressure, warning you to drive for the conditions and ensure your safety. Lots of airbags are on hand to protect you in the event of a collision, while Anti-Slip Regulation, Electronic Differential Lock and Electronic Stabilisation Control work to ensure that should never happen. 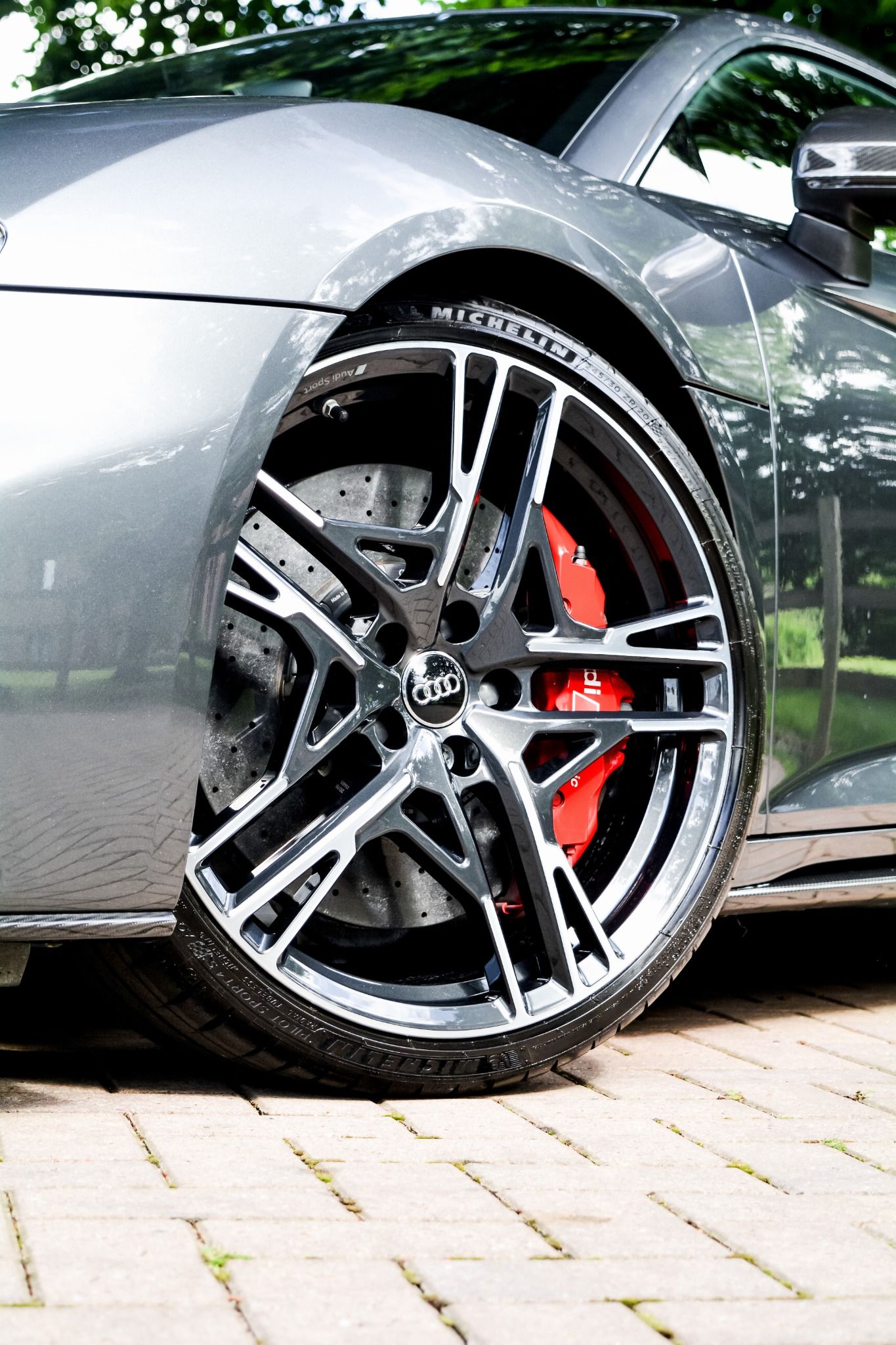 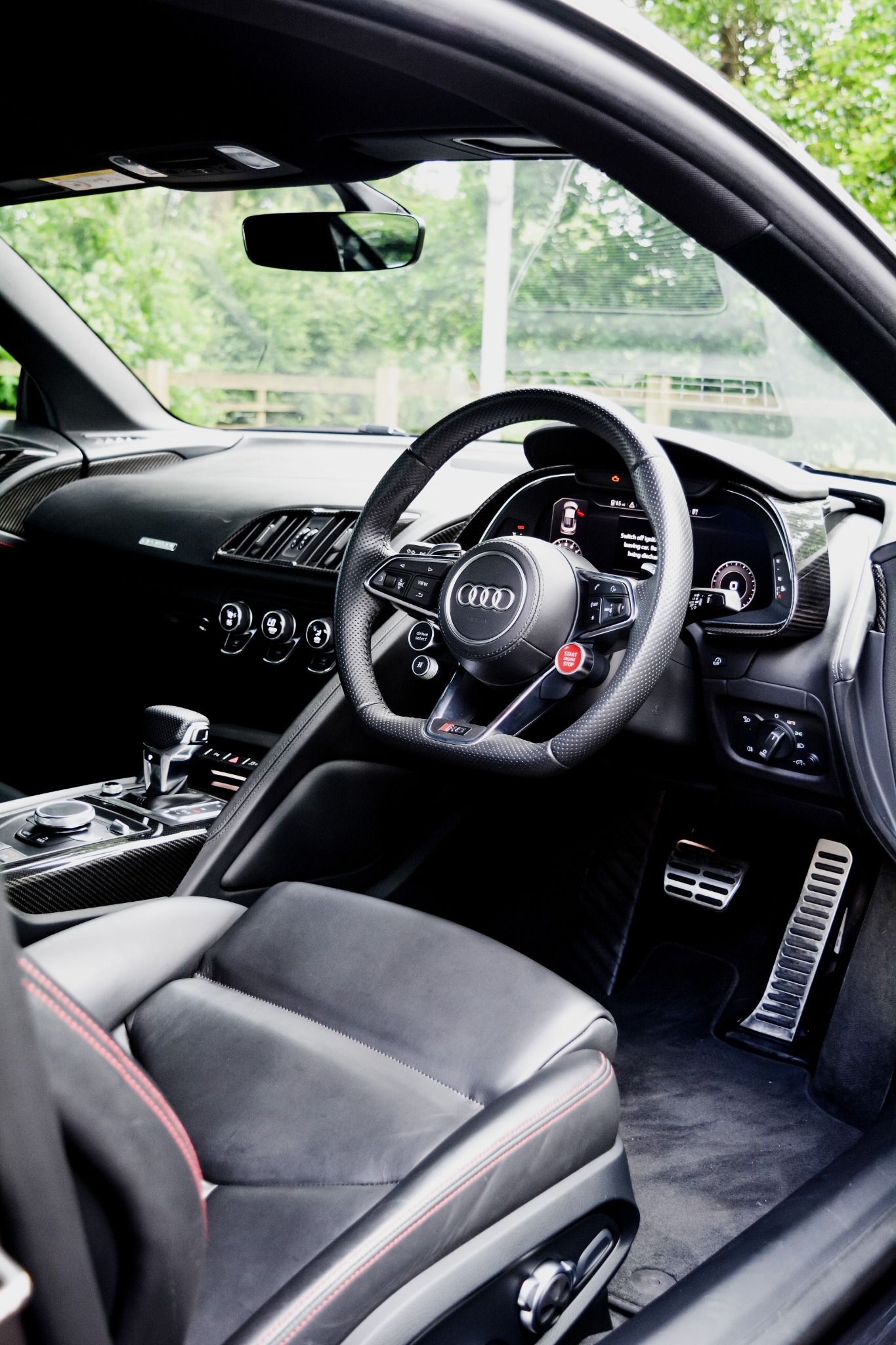 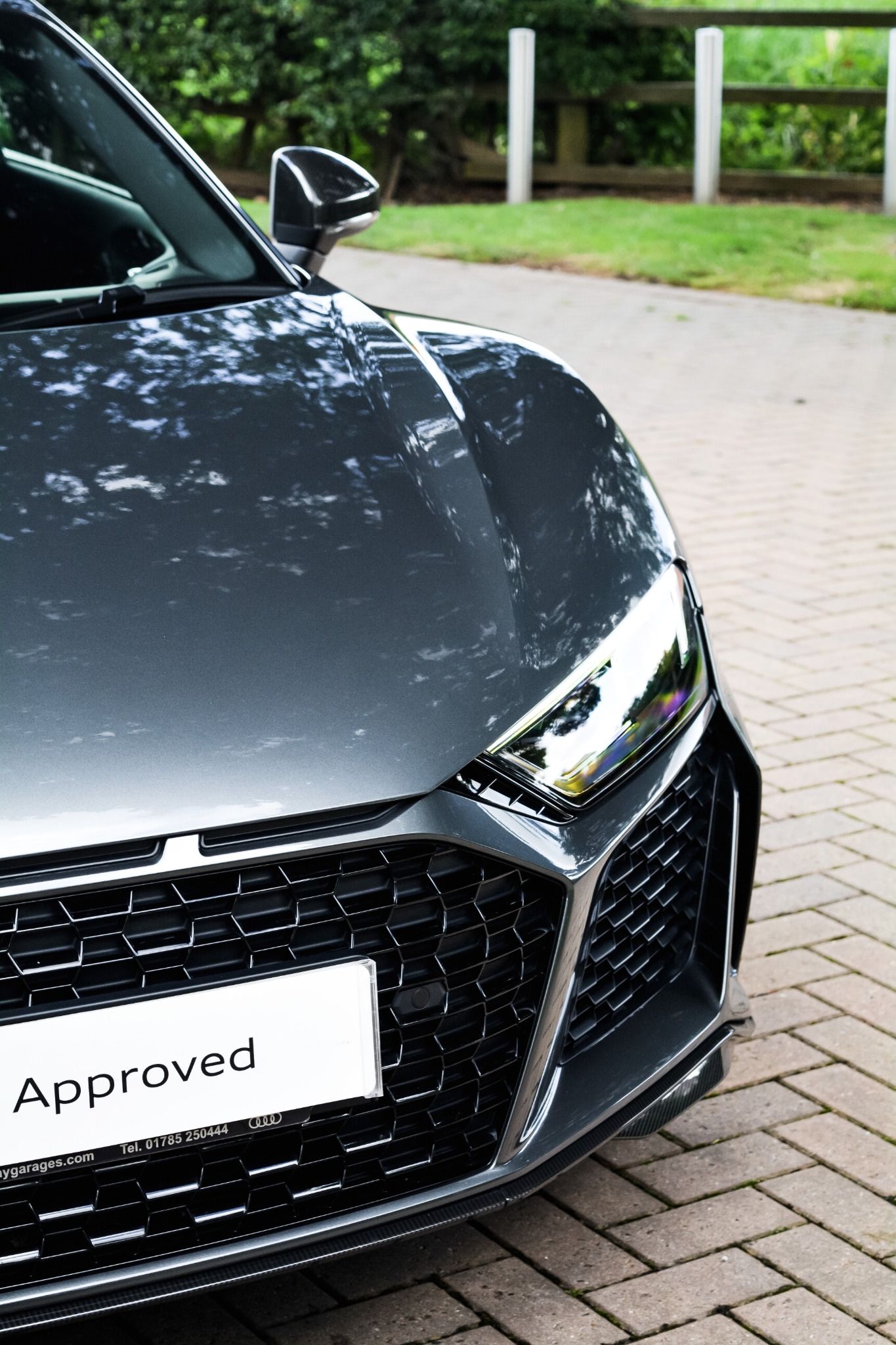 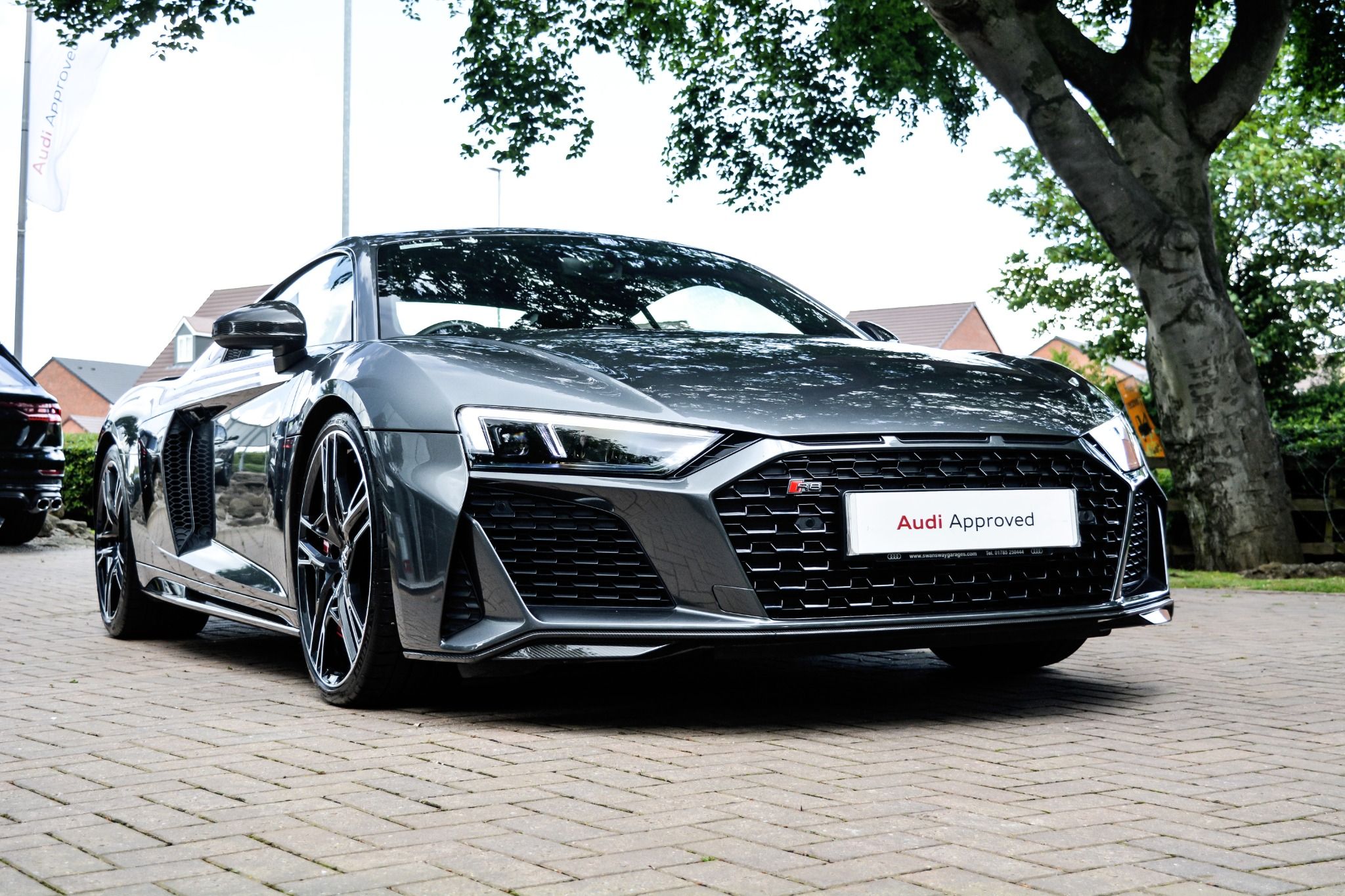 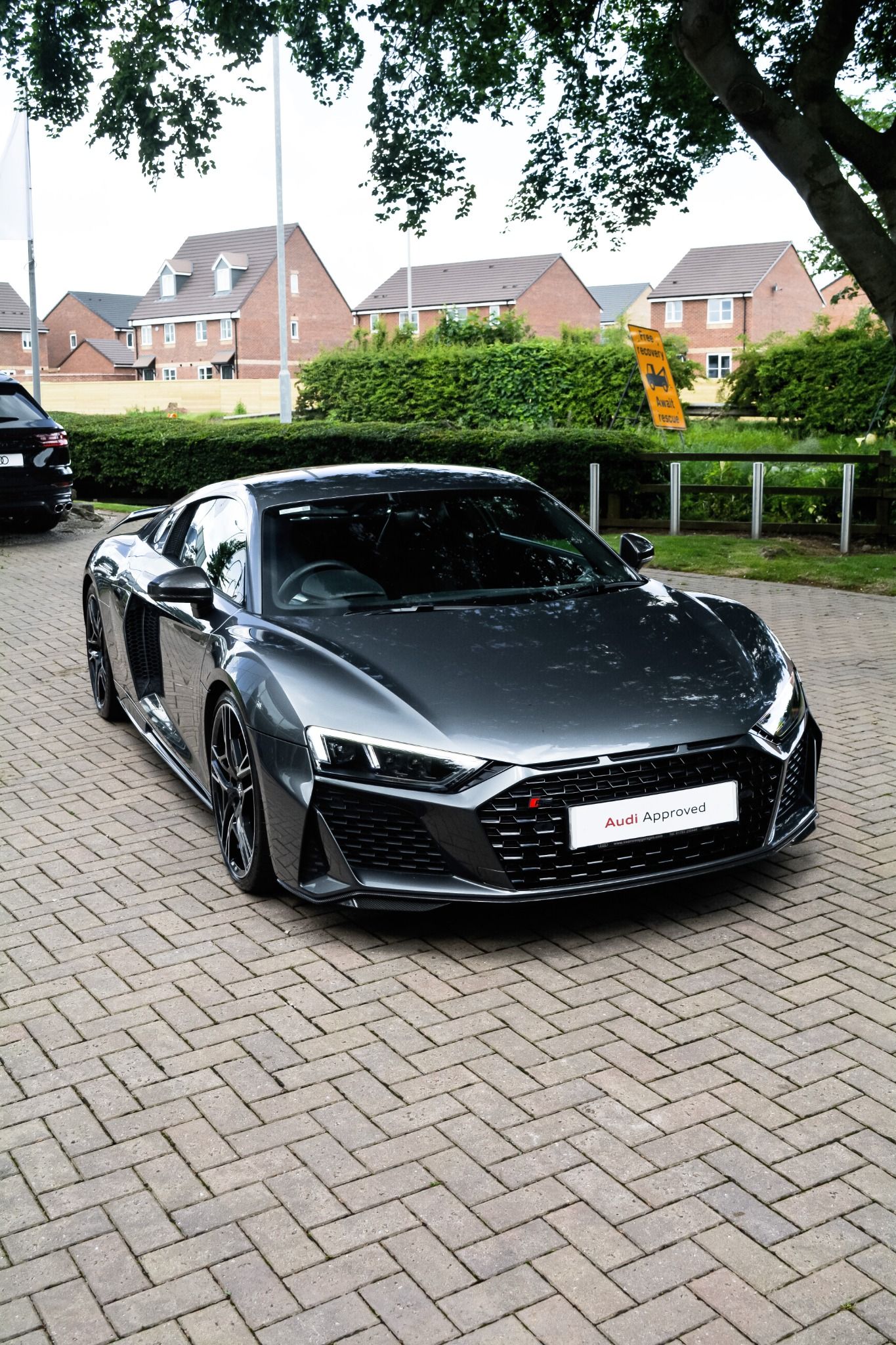 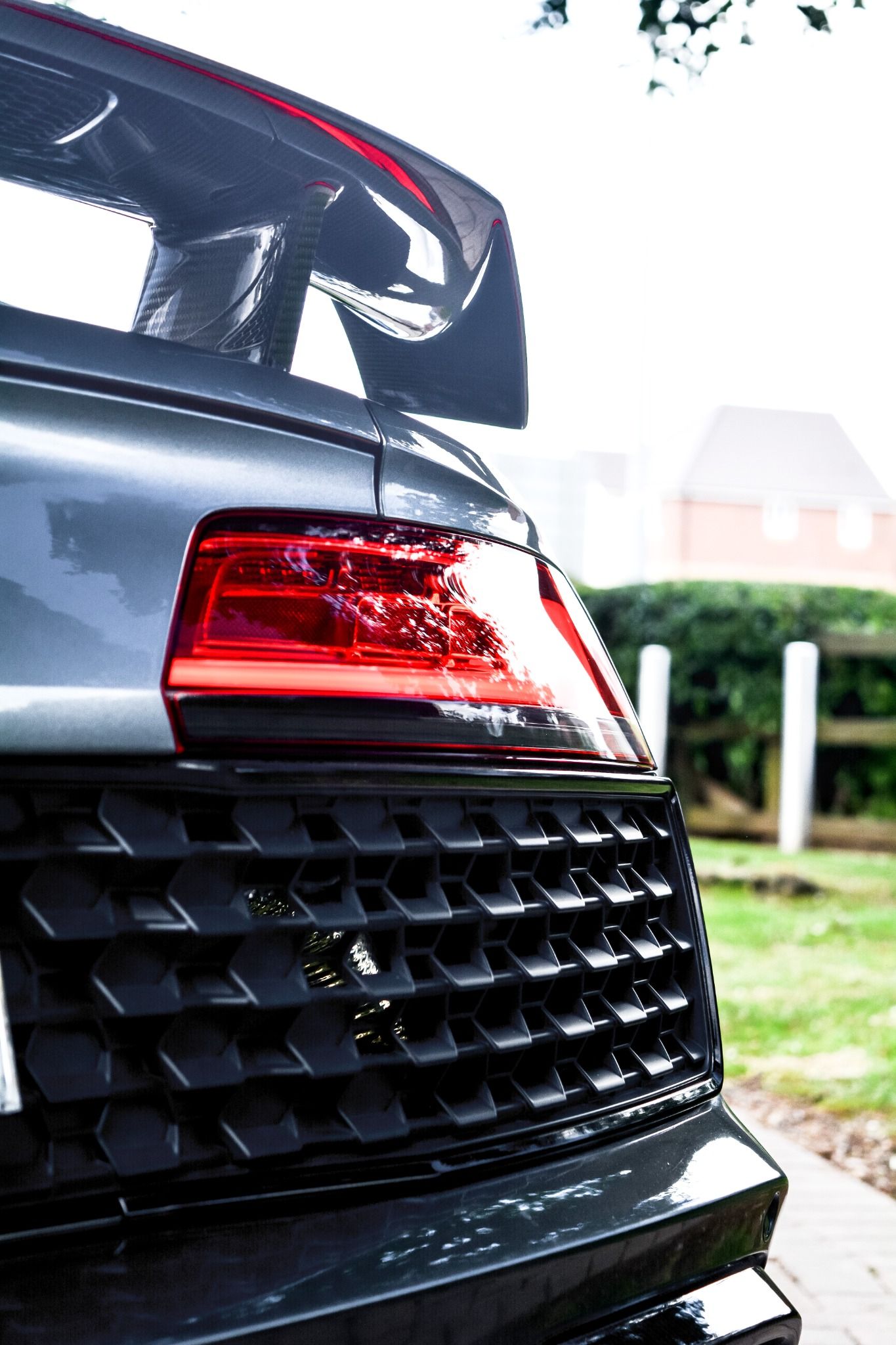 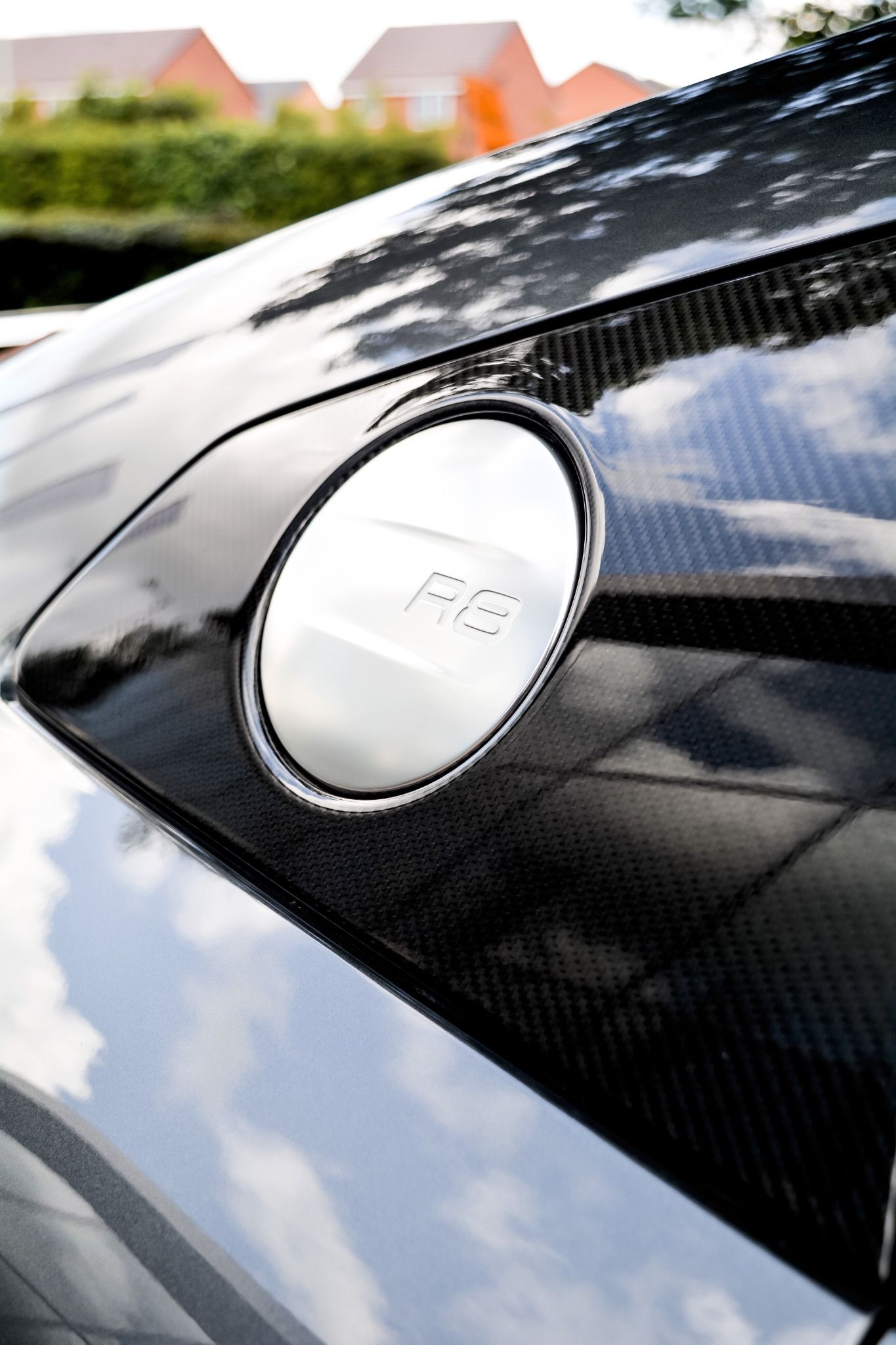 What trim levels are on the Audi R8 Coupé?

In addition to the V10 RWD Performance, the V10 Performance RWD Edition trim highlights include:

The V10 Performance trim highlights include:

Prod the throttle pedal and the 5.2-litre V10 engine propels you forward with ferocious power – 533bhp in the standard trim, or 602bhp if you opt for the range-topping Plus version. Audi’s legendary quattro all-wheel drive system will help you transfer the immense torque to the road, varying the power it sends to each wheel based on how much grip is available.

There is also the option to choose a V10 Performance RWD/ RWD Edition the 5.2-litre naturally-aspirated V10 engine kicks out 562bhp - 30bhp more than beforehand - while torque is up 10Nm to 550Nm too. Audi claims that the RWD will manage the 0-60mph sprint in 3.5 seconds and carry onwards to a top speed of 204mph.

A Start-Stop system, F1-inspired energy recovery and cylinder-on-demand technologies –where the engine can switch from ten to five cylinders to save fuel – combine to ensure it won’t guzzle fuel the way you might expect, either.

Audi drive select means you can also alter the driving manners of the R8 to suit the occasion, subtly changing the throttle and steering responses, while appropriately sporty suspension is fitted as standard. Audi has given its supercar a sharper look and a new badge. Darren Cassey finds out if it’s still the standard-bearer for everyday useable supercars.

The Audi R8 has long made a name for itself as the everyday supercar. When the first generation hit the streets in 2006, critics said it wasn’t special or exciting enough to rival the likes of Porsche, with its subtle styling and an interior arguably not far off a well-specced Audi hatchback.

However, more than a decade of progress has proved that theory to be false. The R8 has an interior tall people can actually fit in, an ergonomically spot-on interior and surprisingly decent luggage space — but with more than 600bhp and a screaming V10 engine, it more than holds its own in the supercar segment.

With this not being an all-new model, just a mid-life refresh, there’s not a great deal new to report. Easily the most obvious change is to the styling, with the R8’s face given a fairly major overhaul. It’s clearly the same car, just with a sharper, more aggressive look.

There’s also new nomenclature. We’re testing the V10 Performance Quattro model, which is the high-performance version formerly known as V10 Plus. Meanwhile the ‘entry level’ version is now called V10 Quattro. All variants are more powerful and faster than before, too.

There’s one engine available in two states of tune. It’s a 5.2-litre naturally aspirated V10, which makes it something of a unicorn in the car industry – with emissions regulations forcing car manufacturers to turn to turbocharging, this is surely the last of its kind. In V10 Quattro guise it makes 562bhp, but in this Performance model it makes a quite incredible 612bhp. Other important numbers of note are a torque figure of 580Nm, a 0-60mph sprint time of 2.9 seconds and a top speed of 206mph.

As for economy, it’s not going to win any eco awards, with the combined fuel usage at 22mpg and CO2 emissions of 297g/km. That being said, those numbers are mighty impressive for a car and engine of this type, helped by cylinders that shut down when not needed, coasting mode and a petrol particulate filter. The Audi R8 is a true Jekyll and Hyde car, which is where it gets its reputation for being the everyday supercar. If you’re looking to do the boring stuff, like driving through commuter traffic or popping into town to buy some milk, it relaxes into an easy companion. The ride is a little harsh, but visibility is surprisingly good, and the slick gearbox shifts smoothly at any speed.

However, when the road opens up, the R8 comes alive. Audi Drive Select allows you to put the car in dynamic mode, which sharpens the car’s responses and gives you all of the power, all of the time. Couple that 612bhp with the Quattro all-wheel drive system and the result is the kind of acceleration that scares you, the numbers on the digital speedo becoming a blur as you’re pushed back into your seat.

It’s just as capable in the corners, with the fat tyres biting into the road and giving you full confidence in its ability to grip. Perhaps its only fault is that because of this, you’re always driving well within its capabilities on the road, making cornering a little underwhelming at times. That said, the onslaught on your senses that comes from the way this car accelerates more than makes up for it — and the noise is utterly glorious to boot.

This facelift has received a mixed reception — despite the relatively minor changes the R8’s character has been drastically altered. Gone are the soft, sophisticated edges of its predecessor — in is a new, angry face that leaves you under no illusions that this is a high-performance supercar that won’t take any prisoners.

The front end is lower, wider, and the edges more angular. The result is a car that looks like it’s truly hunkered to the road surface even at low speeds. The rear is a little less elegant, with the wide grille running the width of the car, but overall there’s still the same air of high quality and sophistication this model is known for.

The R8’s interior is up there with the best. While those who’ve owned modern Audis will instantly feel at home, the supercar takes all the firm’s interior tropes and just does them better. The seats are exquisite and manage to be figure hugging without being restrictive, the digital cockpit ahead of you oozes class, and the simplified centre console gives a sense of a narrow focus that this car is really for the driver.

The materials used are all of the highest quality, too. Everything you touch feels expensive, even down to the solid click of buttons — there are a decent number of them, too, which is refreshing as touchscreens become the norm. While we praise the V10 as arguably the ultimate end-of-an-era engine, perhaps this interior, too, is one we’ll hold up as the standard-bearer for combining digital integration with physical buttons.

With prices for the V10 Quattro starting at £128,295 and the V10 Performance Quattro at £141,295, the standard specification list is a meaty one. On the Performance this includes 20-inch alloy wheels, ceramic brakes, Nappa leather-upholstered bucket seats, a fixed rear spoiler, and gloss carbon inlays.

There are various free paint options, though you can upgrade to crystal-effect blue for £1,500 or choose from a range of Audi Exclusive paint finishes for £3,400. There are also Alcantara headlining options for £1,350 or £2,500, red brake calipers for £500. There’s even an espresso machine that fits in the cup holder for £210.

The Audi R8 made a name for itself as the car that could do everything, and in its latest iteration, nothing has really changed. It’s a bit faster than before, a bit sharper to look at, and just as lovely inside. It’ll do your morning commute just as happily as it’ll carve up a scenic mountain pass.

The fact it’s sometimes a bit too easy to drive fast will put some off, but for many that’s where its appeal lies. And when it has all-weather performance that can terrify you every time you plant your right foot, few could let that put them off. This is a fantastic car, and the new car market will be a sadder — and quieter — place once this engine goes off sale. Enjoy it while you can…