Top model of the Q family

The new Audi Q8 has it all. A size that lends it a powerful presence. A coupé-like shape that gives it a streamlined look. A luxurious cabin, brimming with next-generation Audi innovations.

Bold, luxurious and sporty: meet the newest member of the Audi Q family. If you like the best of both worlds then you’ll love the Audi Q8 which blends the dynamic styling of a coupe with the presence of a large SUV. Fusion at its finest.

Its sweeping roofline and wide stance give it an undeniable sporty look yet with its Quattro all-wheel drive and higher ground clearance it is most definitely an SUV too, taking you places where no coupe could.

Inside there is another fabulous fusion, this time technology and luxury are blended to give you, and your passengers, a calm, safe yet decadent ride. The dual touchscreens blend seamlessly into the minimal dashboard while the seats offer relaxed comfort, whether you’re in the front or the rear. The Audi Q8 is the next step following the design language Audi first brought to the road with the new A8. Strong contours and athletically tight surfaces convey a feeling of power, sophistication and the dynamics of the permanent all-wheel drive.

Compact proportions, paired with a low roof and a flat window form the rear end. A narrow, black high-gloss element with an integrated light strip extends between the rear lights; accentuating the width of the Q8.

It creates a striking light signature day or night, channelling its roots in the original quattro. It’s a car that’s not afraid to bring together its SUV and coupe roots and bring a whole new vehicle to the road, for those who believe you truly can have your cake and eat it too.

Elegance is the new premium

The upper of the dual touchscreens is the central element of the interior of the Audi Q8. With its black-panel look, it almost dissolves into the minimalist dashboard when switched off. Simple, easy-to-understand symbols digitally replace the usual array of switchgear allowing a high level of integration meaning simplicity replaces complexity.

The slender dashboard and the calm lines, with a strong horizontal focus, highlight the impression of width conveyed by the exterior of the Audi Q8. The styling in the interior is clean and simple. All elements have a logical connection and harmonise with one another: from the “wrap around” – the large arch running from the front doors across the instrument panel – to the operating unit for the lighting. What trim levels are on the Audi Q8?

​In addition to S line, the Black Edition trim highlights include:

In addition to Black Edition, the Vorsprung trim highlights include:

The Audi Q8 TFSI e is available with two slightly different powertrains. Both cars feature a 3.0-litre V6 petrol engine mated to an electric motor and 17.8kWh battery, which allows for a 28-mile electric range. That should mean most journeys can be completed just on electricity.

If you fancy a little more power, there is the flagship Q8 60 TFSI e, which produces a punchier 456bhp and 700Nm of torque. That allows it to sprint 0.4 seconds quicker to 60mph than the other model – meaning it takes 5.2 seconds. Its top speed is unchanged. It’s only marginally less efficient, too – still returning 97.9mpg, with CO2 emissions of 66g/km. 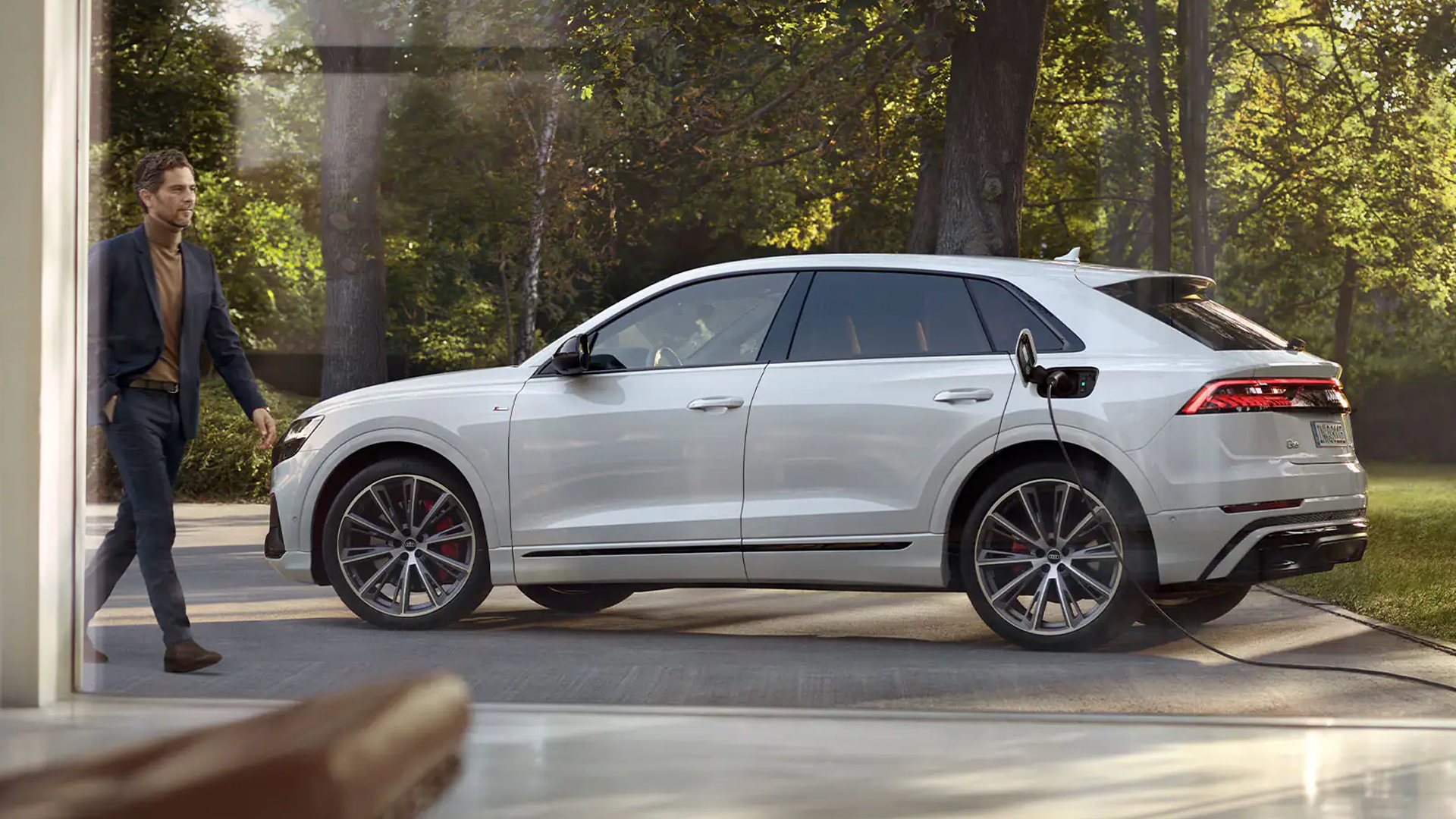 Motoring journo, James Baggott headed to the mountains of Chile to test the latest member of the Audi Q family of SUVs – the Q8

Should I buy an Audi Q8?

The latest addition to the Audi range is the Q8; but is it a car you should be adding to your consideration list?

What is the Audi Q8?

Just when you thought Audi couldn’t stretch its Q range any further, along comes the Q8; but, is it an answer to a question that no one really was asking?

Audi says the Q8 is designed for car buyers who want the elegance of a luxury coupe and the convenience of a large SUV and judging by the popularity of the luxurious Range Rover brand, there’s a market out there for just such a beast.

Based on the range-topping Audi Q7 SUV, the Q8 is shorter both in height and length, but wider, and debuts the new ‘face of the Q family’ with a bold and imposing grille.

With the BMW X6 and Mercedes Benz GLE already in this sector the Q8 needs to stand out from the crowd, and it does that with its design dominated by that new nose and swooping body lines, it cuts a fine figure in the tough SUV-coupe class.

If you’re in the market for a large coupe SUV, then the Audi Q8 will definitely appeal. Audi has done a great job of making a sloping roofed off-roader look handsome; in my opinion it’s far more attractive than the awkward BMW X6 and that’s a real plus point. What’s under the bonnet of the Audi Q8?

Audi have used their technological tricks to great advantage under the bonnet in a concerted effort to increase efficiency. A mild hybrid system (MHEV) uses a large battery to increase the amount of time the engine can use its start-stop system and even allows it to completely shut down and coast at speeds between 34mph and 99mph.

At launch, just one engine will be available, a 3.0-litre diesel badged 50 TDI. This offers 286bhp and 600Nm of torque and is able to shift the Q8 from 0 to 60mph in a very creditable 6.3 seconds and on to a top speed of 144mph. Fuel economy and emissions have yet to be revealed. A less powerful 3.0-litre diesel and a 3.0-litre petrol will join the range later in the year.

Our test route was thousands of metres above sea level in the Atacama mountains of Chile, where, to be fair we struggled to breathe, and so too, to some degree, did the Audi engines. That said, the high-powered 3.0-litre diesel model we tested performed well.

The steering felt a little weightier than you’d expect in an Audi SUV. On the smaller wheeled option with air-suspension cranked up to comfort, it coped well with the rutted roads that crossed the South American deserts. In all honesty its dynamic ability was rather hard to rate on these arrow straight highways, but on the few bends we did tackle there was little body roll.

Inside, the smart twin-screen set-up, first seen on the Audi A8 has been implemented. I’m a big fan of this configuration which splits heating and car controls to the lower display and entertainment to the top. It’s minutely adjustable and really is a joy to use. Haptic feedback, which makes it feel like you’re pressing an actual physical button, rather than a touchscreen, makes it easy to work with on the move, and the controls are intuitive.

The latest technology is put to good use, you’ll never go without your favourite snack again, the latest natural language voice control lets you simply say ‘I’m hungry’ or ‘I need fuel’ and the system pulls up nearby restaurants or petrol stations. The Sat Nav can learn your regular routes too – even if you haven’t added them to the system – and will warn you of unusual traffic issues on your commute.

The dash swoops around the driver and passenger in coupe-car style and the multi-adjustable seats are very comfy. The interior materials look and feel luxurious too, though our test car’s centre console did have an irritating little squeak.

The S line specification includes LED headlights, 21-inch alloy wheels and adaptive sport air suspension as standard. A reversing camera, phone charging box, ambient lighting, powered tailgate and keyless go are some of the other highlights which do go on and on.

A high-end Vorsprung specification will be made available shortly after launch which adds huge 22-inch alloys, sportier (and heated) seats, a head-up display, more leather, panoramic glass sunroof, and power door closure, among many other niceties.

Verdict on the Audi Q8

In a market of quite frankly, in my opinion at least, rather ugly large SUV coupes, the Audi Q8 stands out as a bit of a looker.

The whopping new grille may be a little ‘marmite’, but it helps the Q8 it cut a rather dramatic and dashing figure on the road. It’s designed to appeal to a niche market of and for that market it definitely delivers; the Q8 is a compelling package that’s enjoyable to drive, comfortable and packed with usable and useful technology.

For Audi this could well be another niche rather successfully filled.