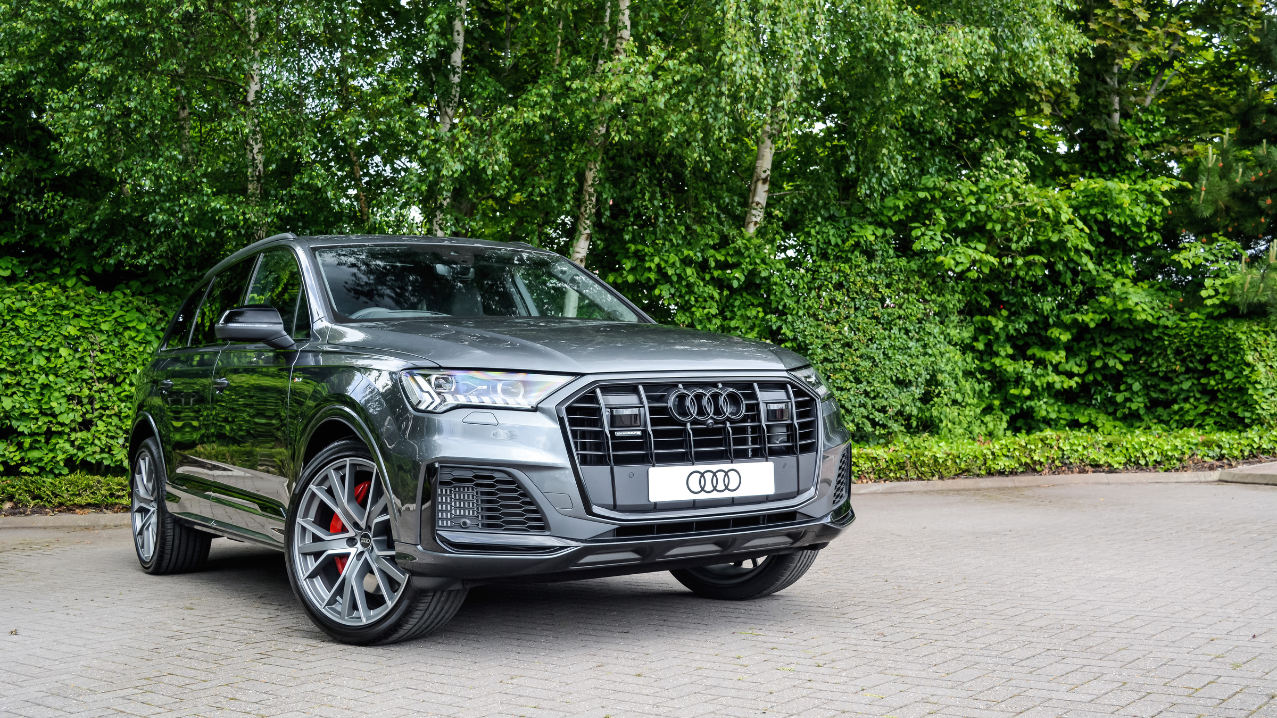 You want an impressive presence on the road, and that often means a car packed to the roof with technology for some! Creating the perfect off-road Audi experience is important if you want to enjoy the largest in the Audi SUV range - the new Audi Q7 is one to watch!

Drivers want versatility, comfort and luxury. This is exactly what you get when you drive in the new Audi; which is why it’s just so appealing! You get everything included in this large vehicle with the benefits of driving something that feels smaller and lighter on the road. You can manage some off-roading in this new Audi Q7, as it’s an excellent tow car. 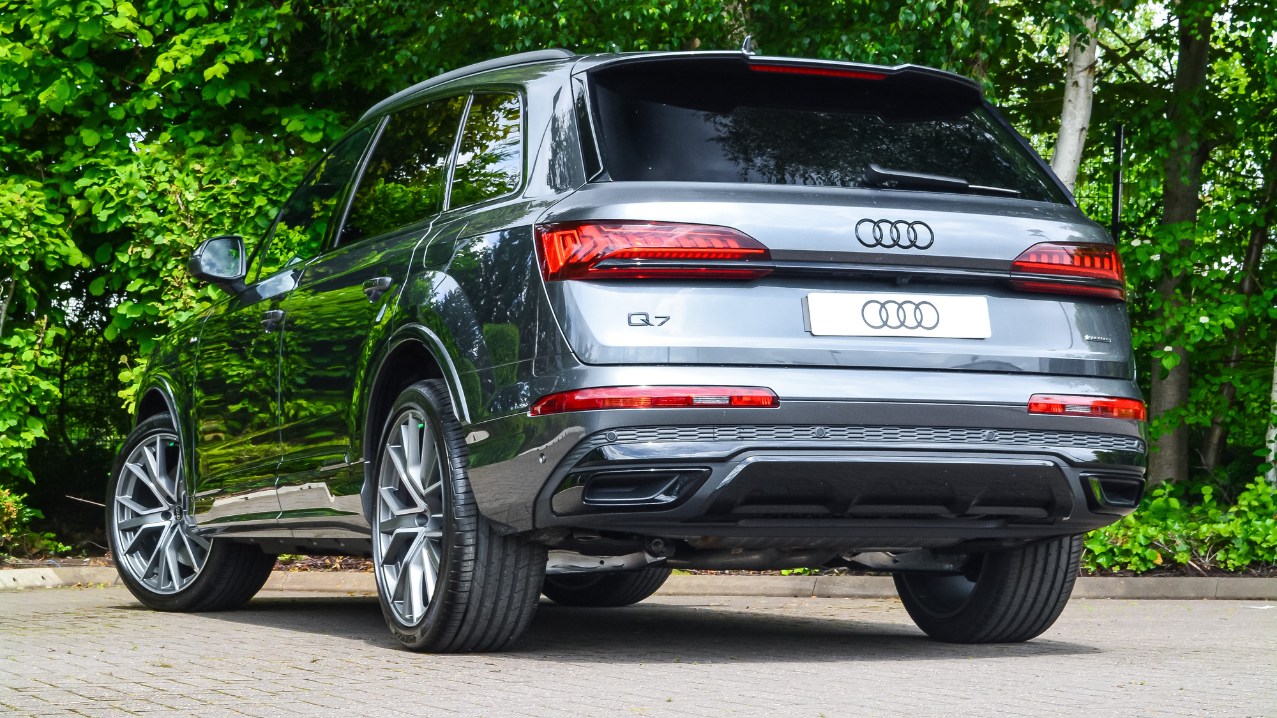 If there is one thing that will catch your eye when you first look at the Audi Q7, it’s that you get a LOT of car for the money you spend. Drivers want to drive a sleek, chic and powerful car that offers a prestige that no other vehicle can offer. There are four different trims:

The S Line has the bigger wheels as well as a sportier look. This serves to make it look more powerful and imposing on the road, which is the kind of look you want in a new Audi Q7! The car oozes luxury, with rear privacy glass and a sensation of majesty making it an excellent family car option.

One thing that can be said about the interior of the new Audi Q7 is that it’s comfortable. The materials are beautiful, with sumptuous looking wood veneer and part-leather upholstery. The Virtual Cockpit that is typical of the new Audi Q7 does well to swap the conventional dials for a larger 12.3in panel right behind the steering wheel. Not only does it tell you your current speed and rev rate, you’ll see full-colour sat nav maps, audio information and even phone systems you can hook up to your latest smartphone.

The large mirrors on the doors are heated, which ensures you won’t be blinded by condensation while you drive. This offers you better visibility on the road, with a better approach view of what’s approaching from behind. When you reverse, you’ll notice that the intuitive left-hand mirror tilts to the ground to allow you to see the kerb and prevent accidents.

Some of the other interior design features that you’ll find in the new Audi Q7 include: 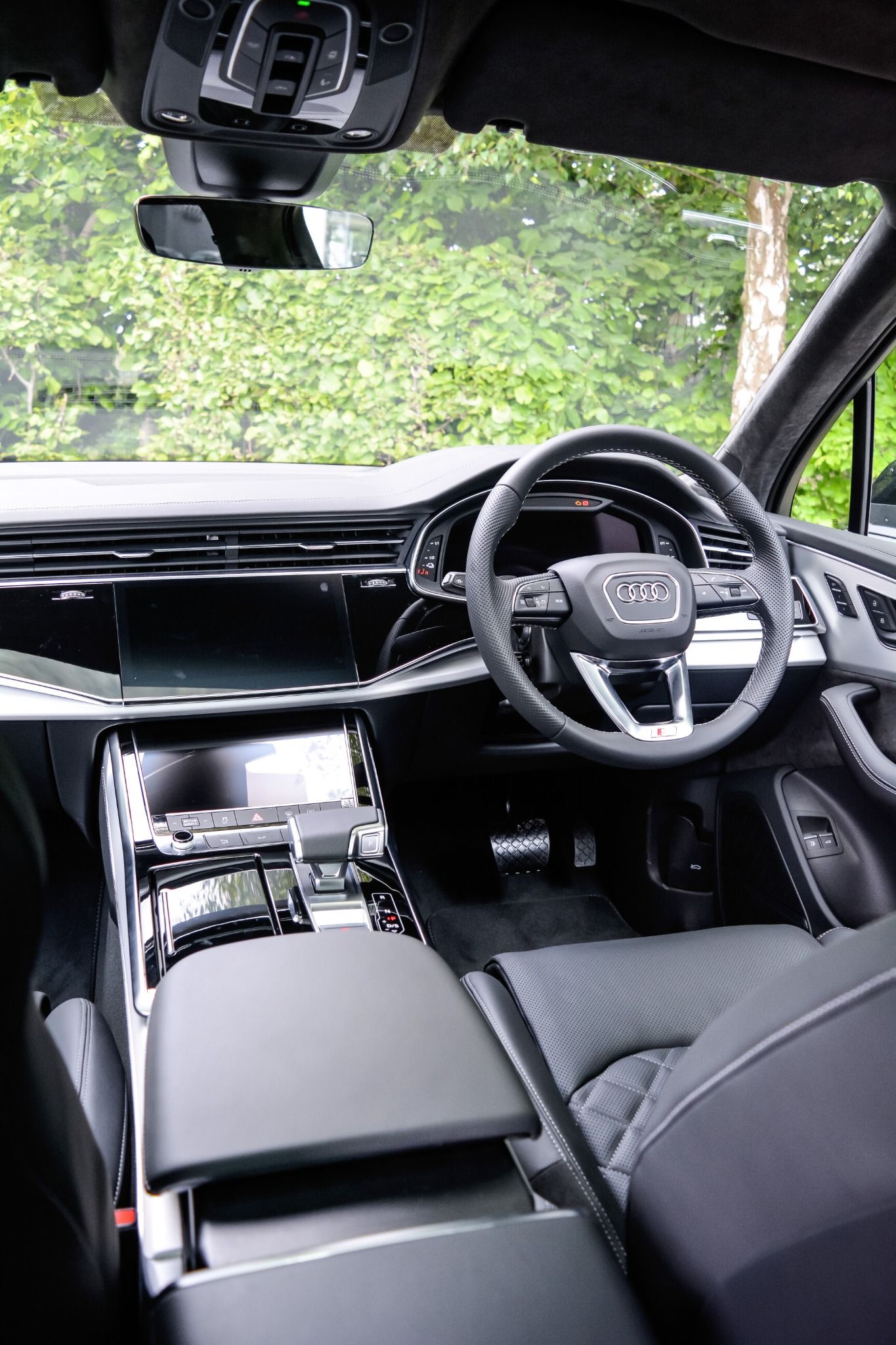 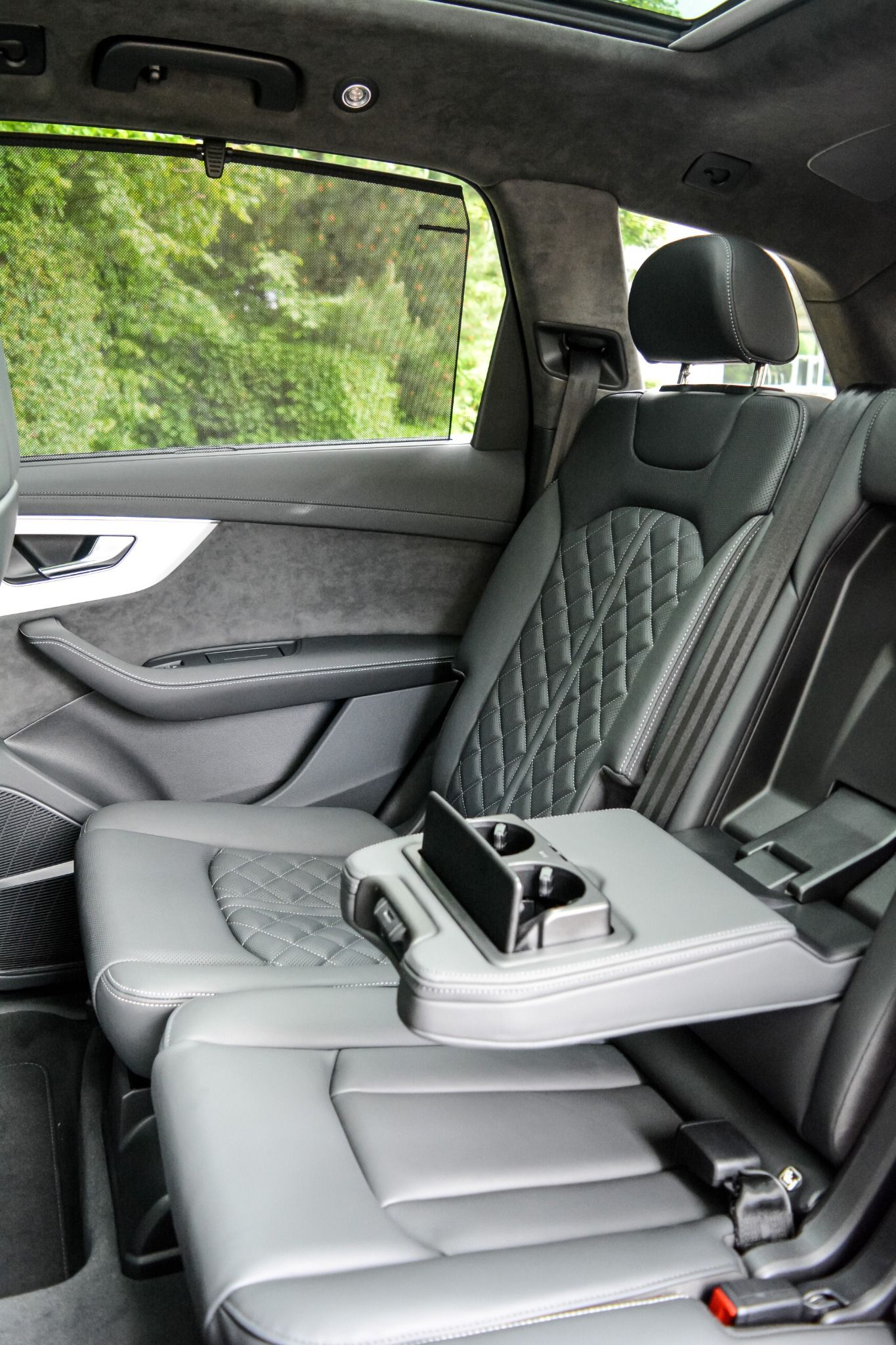 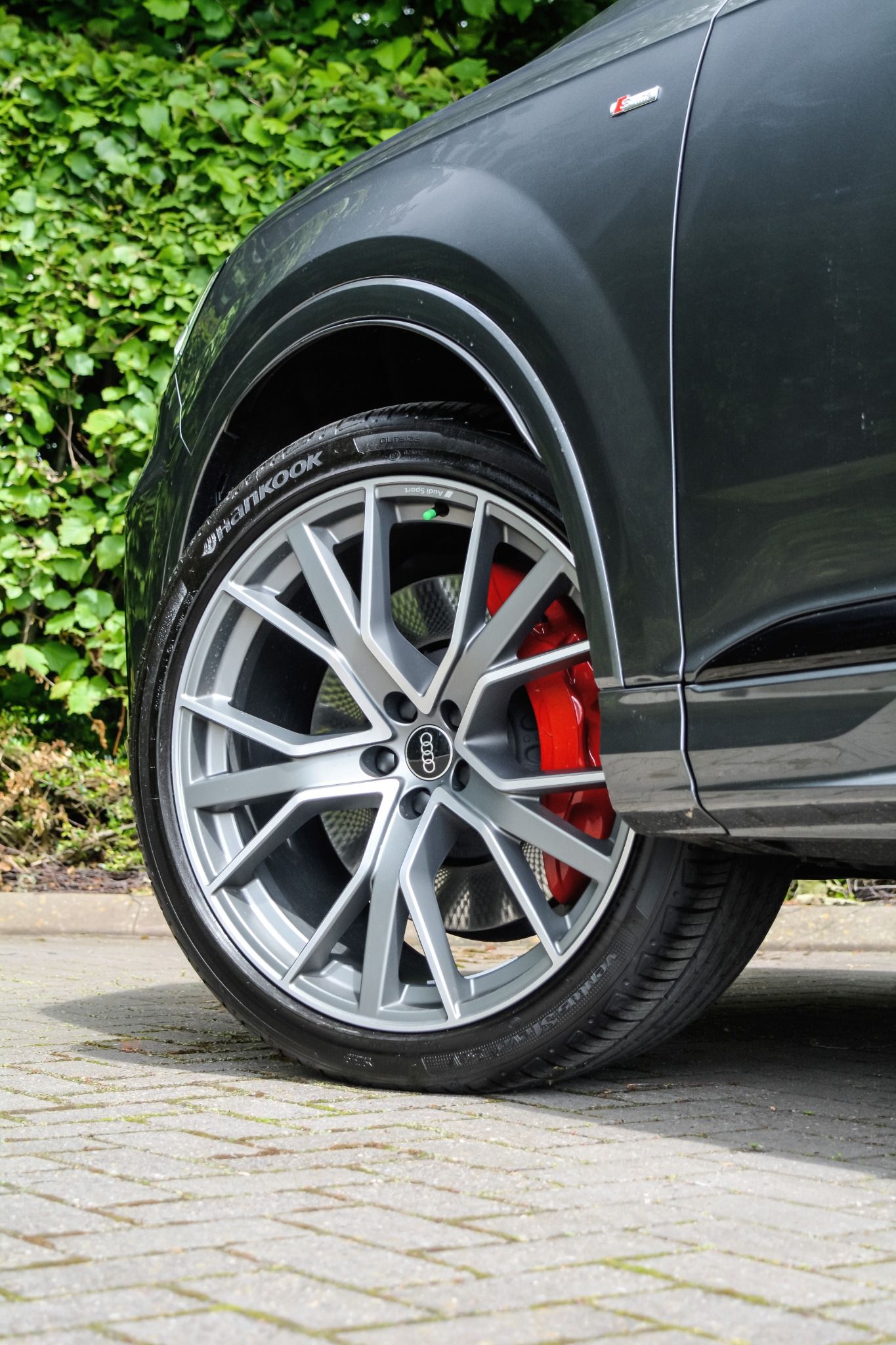 There are options when it comes to the engine with the new Audi Q7, but even the less powerful of the two 3.0-litre V6 diesel engines delivers an impressive performance in acceleration. The 282bhp 50 TDI is punchier even at low revs, and the acceleration builds strongly from 1500rpm. This makes the Q7 an effortless drive, with the Black Edition and the Vorsprung trims having a “sports” version of the air suspension system. The ride height is lowered by 15mm, which means that it shouldn't come as much of a shock that it’s a supple option compared to rival cars.

The Adaptive Cruise Control makes longer journeys less tiring on your car, which keeps up the safety from other cars on the road. It will automatically apply the brakes and accelerate for you, allowing you to arrive where you want to go feeling refreshed. The Audi Q7 also has the Parking System Plus installed, which can give you the added eyes you need when it comes to parking your car. The best thing about this is that you no longer have to worry about the metallic paint being scratched: it’s all done for you without worrying about bumps!

The infotainment system on offer with the new Audi Q7 is standard with the car, but you can upgrade as you like. You can find smartphone pairing options and programming the satellite navigation system is easy. There are also the following excellent technology features:

If you want more, ask for an Audi Virtual Cockpit to replace the analogue instruments. You can find a 7” TFT screen, too, with a TFT panel to display speed and revs to satellite navigation maps and phone/audio as you need it. The new Audi Q7 has previously received a 5* Euro NCAP safety rating, and some of the safety features include:

What trim levels are on the Audi Q7?

In addition to Sport, S line trim highlights include:

In addition to the Sport and S line trims, the Black Edition Q7 highlights includes:

In addition to Black Edition, the Vorsprung trim highlights include:

There are two PHEV power variants of the Q7 hybrid- 55 and 60 TFSIe. They both use a 3.0-litre V6 TFSI engine and a 94kW electric motor, powered by a 17.3kWh battery located under the boot floor, and is available only as a 5 seater variant.

The new Audi Q7 TFSI e includes a combination of flowing lines that are seen in Audi ​coupé models as well as stylish designs with the comfort and power of an SUV., and is available in 5 trim levels.

Luxurious Valcona leather within the luxurious S line, Black Edition or Vorsprung trim levels.​ The luxury features don't stop there, In Vorsprung ​there are heated seats in the front and second row as well as a 3D Bose Premium Sound System that comes as standard​. 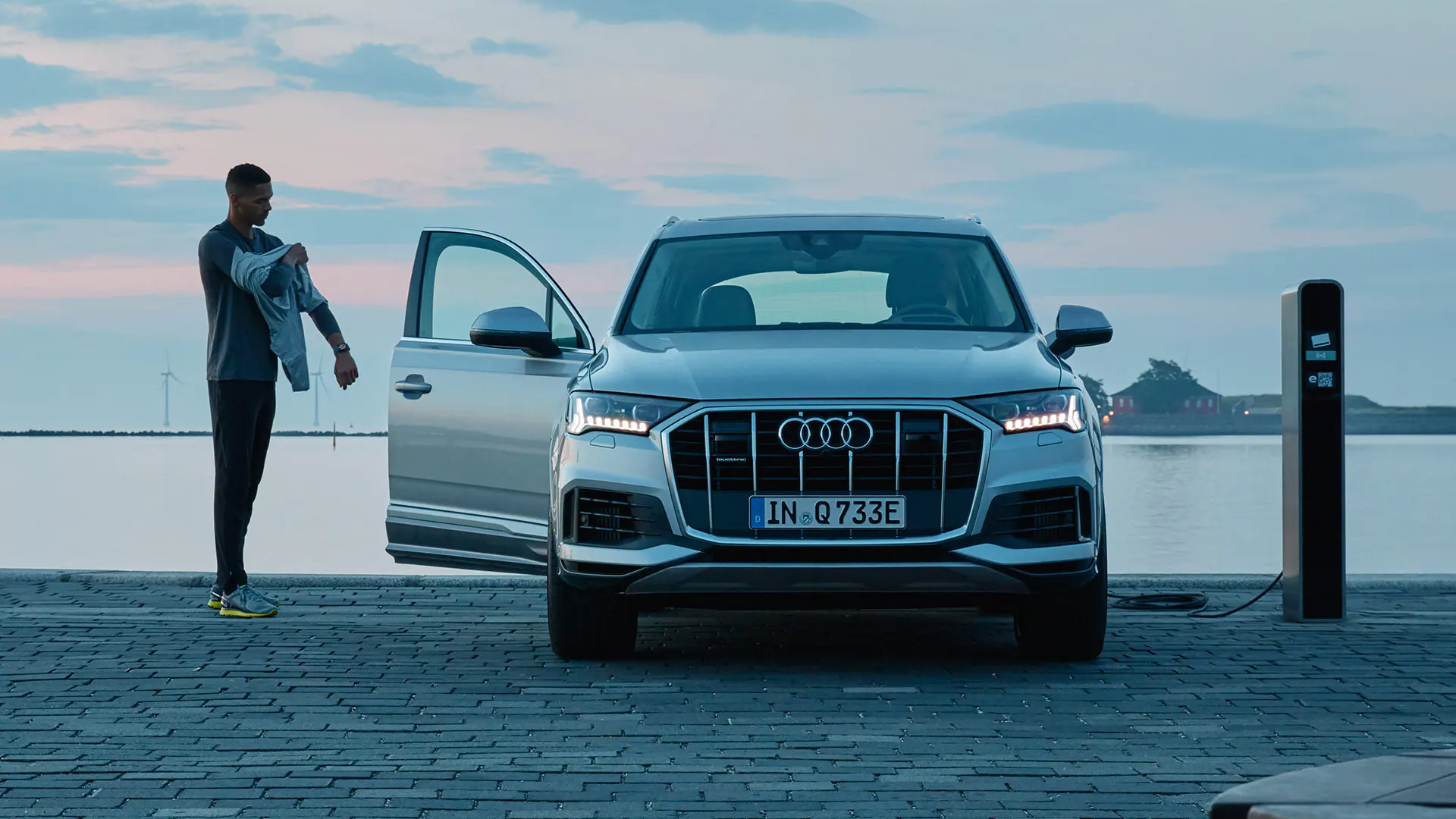 ​Audi’s first SUV is back for a second instalment with less weight, better efficiency and even more space inside. Let's take a look...

Large premium SUVs are more popular than ever and given that the outgoing Q7 is nearing its ninth birthday Audi has decided it’s time for a new one.

Rather than a refresh the German maker has gone to town with Q7 MkII; there’s a new body and chassis with a substantial weight reduction, a new exterior and interior, the latest engines and a major upgrade in terms of standard and optional technology too. Few stones have been left unturned in the quest for the best-in-class title.

Diesel will be the preferred option in the UK and the latest 3.0-litre TDI unit is a gem. Refined and with plenty of torque on offer it can move the Q7 along very briskly indeed, with 0-62mph taking only 6.5 seconds, although it’s so refined it doesn’t feel as fast. Remarkably it’s also frugal with it, with a claimed combined consumption figure of 47.9mpg with 153g/km of CO2.

There are few better views than from behind the wheel of the Q7, thanks to the high driving position and large glazed area. There’s fewer buttons now thanks to the slick MMI Touch system and it all works beautifully well.

It’s secure and stable rather than thrilling to drive but it’s the level of comfort on offer that is of most importance, and the refined driving experience and low noise levels are impressive. Presence and stature are everything at this end of the market, and clearly Audi have given the Q7 as much of both as possible. Ditching the grey plastic cladding around the lower portion of the car for body colour gives it a smarter look, and the old car’s curvy waistline has been ditched for something a little more squared off. Whether it’s better looking or not is a matter of opinion however; the front grille is inspired by the smaller Q3 but looks huge on the Q7.

There’s nothing to touch the Q7’s image this side of a full-size Range Rover. People will see you coming and be in no doubt about which manufacturer your mighty SUV comes from.

It might be lighter than the old car but the new Q7 is certainly not short of space. Inside it is absolutely vast; it doesn’t matter which seat you sit in, there’s head, leg and shoulder room in spades. The larger windows help the feeling of space too, while the space itself is very well managed. The third row of seats can stow electrically while the second row tilts and folds for easy access. You can fit three child seats across the second row, giving you the nightmarish prospect of being able to carry six infants in one car. Even with all seats in place there’s 770 litres of boot space, and 1,990 with them all folded.

The options list is huge too but includes goodies like the clever virtual cockpit already seen in the TT, Apple Car Play or Google Android Auto and a smart rear tablet for entertaining passengers.

If there was ever a perfect family wagon then the new Q7 is it. With so much space inside and a great deal of flexibility on how that space is used it can probably cope with any kind of combination of passenger size, number and accompanying luggage as you could throw in it. What’s more those passengers will be carried in comfort. It’s not cheap of course but it’s a luxurious cabin and an effortless driving experience to boot.