The Q4 e-tron makes a statement - it has a powerful body with a high front, wide stance and large wheels which distinguishes the strength of an SUV.

Compact in size, the Q4 e-tron concept is an agile all-rounder. Its interior space is far from compact and offers unrestricted space and comfort. The Q4 e-tron concept makes a statement with strong design cues: the wide stance; the large wheels, as well as the bold intakes and structured closed surface grille. All signifying a car that’s pure Audi, as well as fully-electric.​ Interior space is comparable to a full-size SUV, rear passenger legroom is plentiful due to the absence of a central tunnel.​

Inside, the Q4 e-tron is every inch Audi. Packed with futuristic lines and next-generation technology. It also includes a newly refined digital Virtual Cockpit display, as well as a touch-screen controls show speed, charge levels and navigation information with pin-sharp clarity. A new, large-format head-up display features for the first time: using augmented reality, it superimposes graphics like turning arrows directly on to the road.

Spanning almost the entire length of the underbody area, the large battery that brings the Q4 Sportback e-tron concept to life has a capacity of 82 kilowatt hours, giving a WLTP-certified range of up to 279 miles that sets a new benchmark in this class. Versions with rear-wheel drive will push on even further, covering a range of up to 310 miles based on WLTP test data.

The Audi Q4 e-tron models are packed with the latest Audi technology advancements : a new optional head-up display uses augmented reality to project driver information seemingly on to the road. Another new feature is the optional SONOS premium sound system. Some of the standard equipment that can be found in the Q4 e-tron includes Audi Virtual cockpit; MMI Navigation plus with a 10.1” touch screen and a double-spoke design steering wheel with touch-sensitive operation. What trim levels are on the Audi Q4 e-tron?

In addition or replacement to Sport, S line trim highlights include:

In addition or replacement to S line, Edition 1 trim highlights include:

In addition or replacement to Edition 1, Vorsprung trim highlights include:

The Charging port on this vehicle is located at the rear, the storage compartment for cables is located in the boot. Cables can be stored under the boot floor, for tidy and convenient storage. When it’s time to recharge your Q4 e-tron, the 35 e-tron has a 100kW DC charging capability and the 40 e-tron has 125kW. This enables both to recharge from 5 to 80% in 38 minutes when using a rapid charge public station. When charging from home, a domestic charging wallbox with a capacity of 7kW AC, will comfortably allow you to replenish the battery overnight.

The electric car market is getting larger all the time, and the latest addition is this, the Audi Q4 e-tron

The electric car market is getting larger all the time, and the latest addition is this, the Audi Q4 e-tron. It expands the Audi electric vehicle range, joining the e-tron and e-tron GT, with this model expected to be the big-seller.

There’s a lot of pressure on this car to be good, then, as Audi goes so far as to claim it will become its second best-selling car overall, behind the hugely popular A3 hatchback.

The Q4 uses the Volkswagen Group MEB platform that underpins various EVs including the Skoda Enyaq iV and Volkswagen ID.3. That means that not only will the Q4 have plenty of rivals from other firms, it will also be going up against various cars that it is closely related to.

The interior gets the usual mix of modern design and high-tech technology we expect from Audi, with a big focus on practicality.

We tested the Q4 e-tron 40 which has a rear-mounted electric motor and a 77kWh battery. It’s the largest battery available on the car and in this trim has a 316-mile range. It also has 125kW charging capacity, which means it takes just 38 minutes to go from five to 80 per cent capacity.

The Q4 e-tron has the typical enjoyable attributes of an electric vehicle, moving off quickly and silently and providing an incredibly relaxing driving experience. The ride can jostle you about a bit at slower speeds, but once you get going it smooths out and become more comfortable.

We found the best way to drive was in ‘B’ mode, which cranks up the regenerative braking to its maximum level and means you rarely need to brake in normal driving. 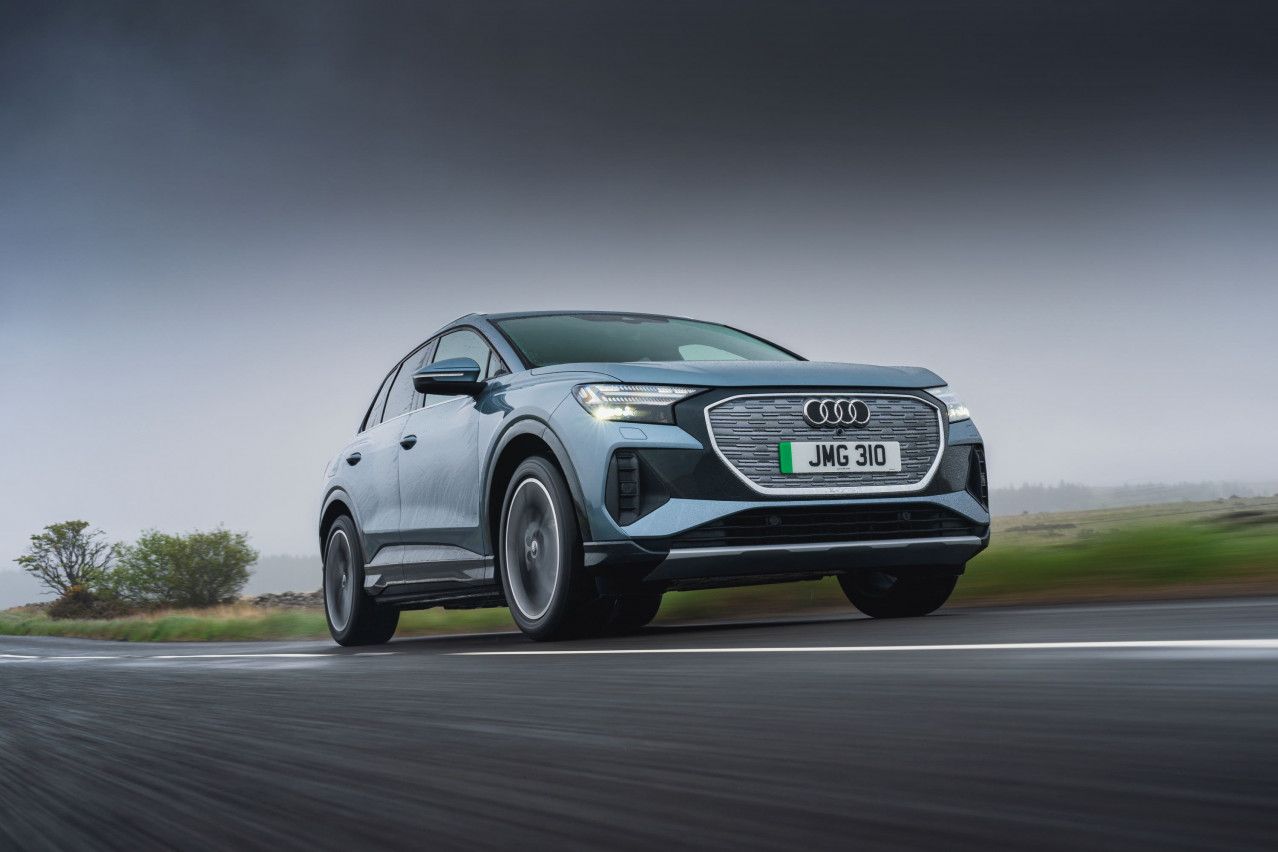 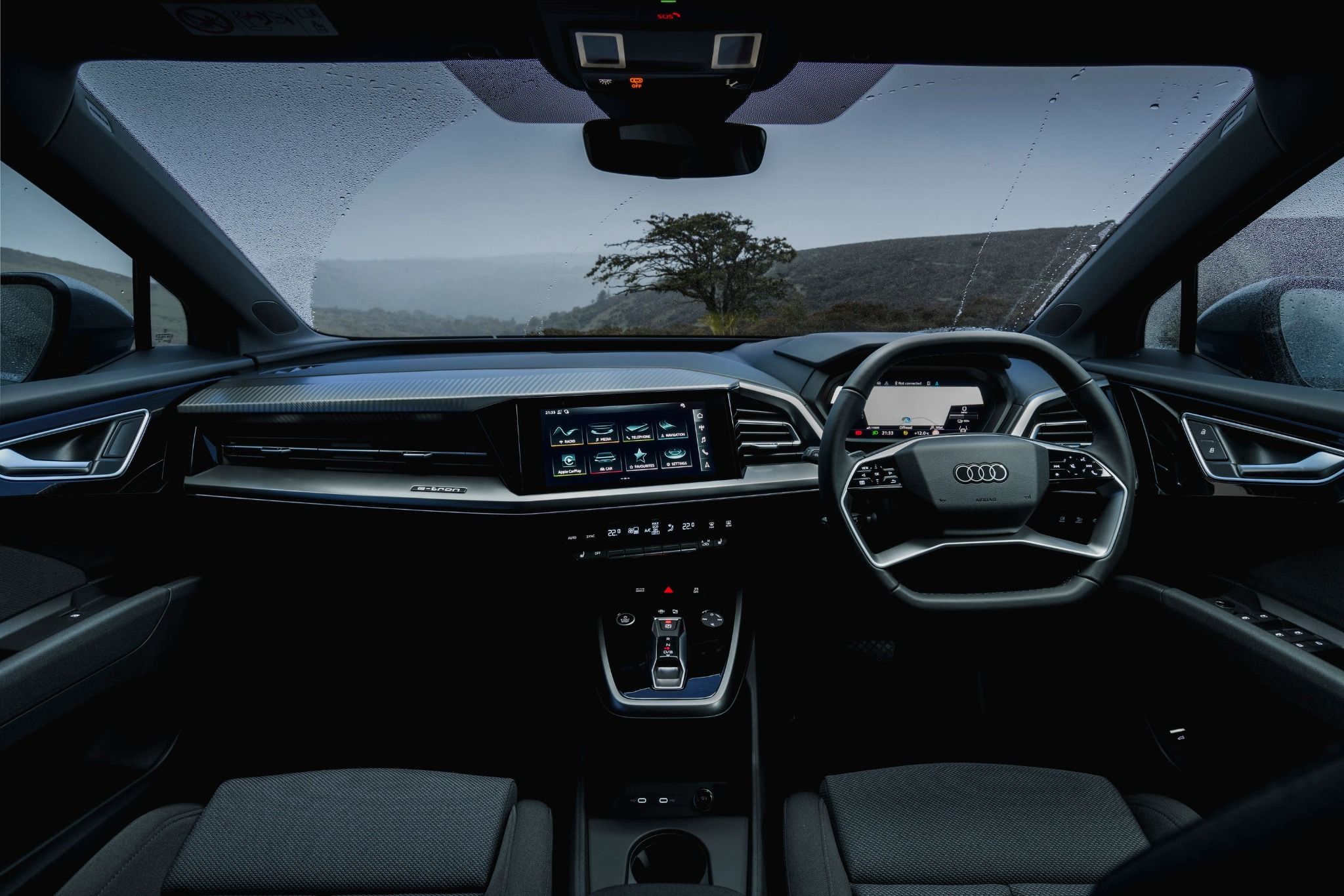 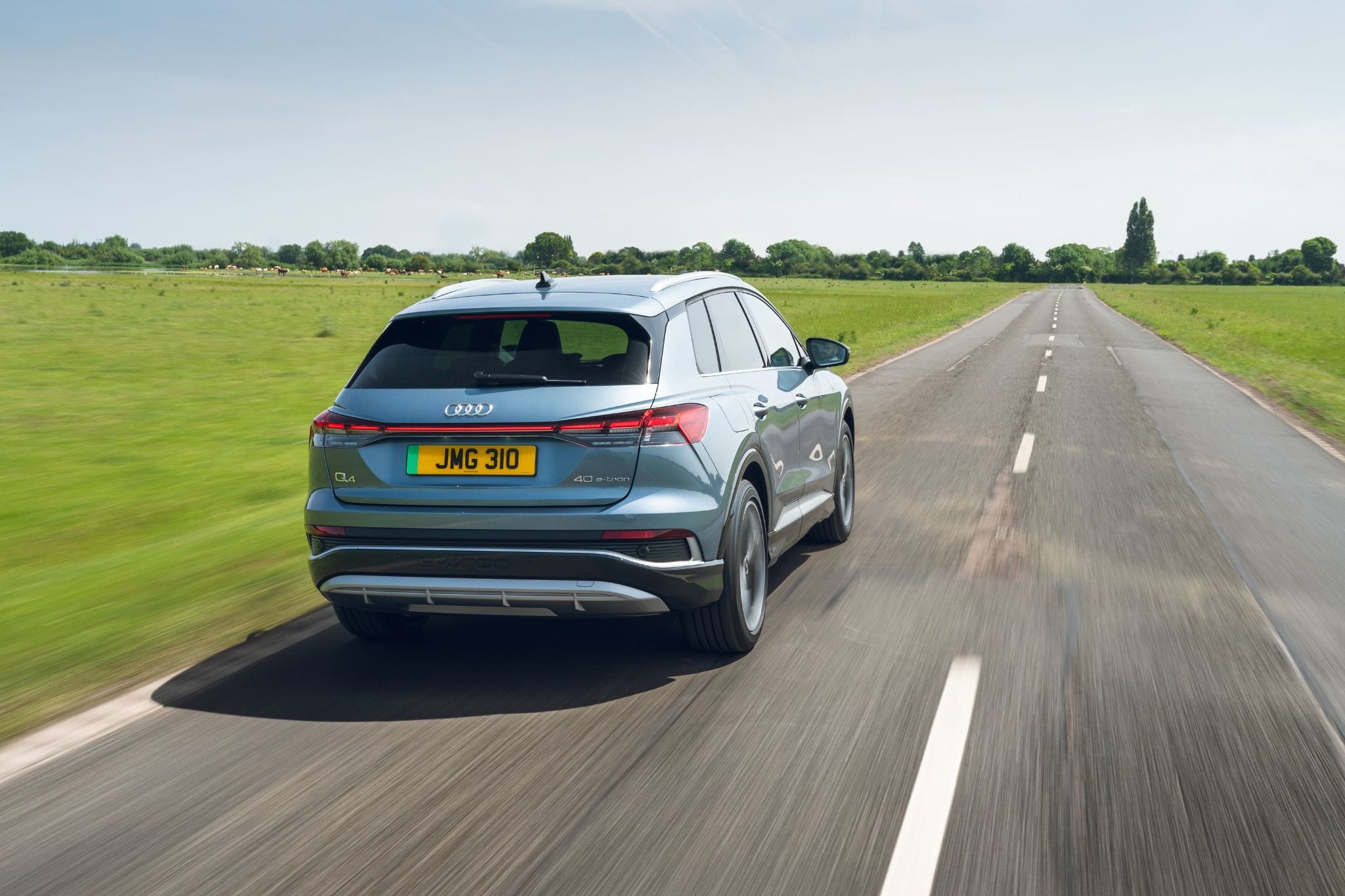 It’s safe to say Audi has nailed the design of the Q4 as it looks brilliant. The front end is dominated by the front grille, but it works with the car’s proportions. You can also customise the design of the headlights, which is a gimmick but still quite fun to use.

There’s also a Sportback version of the Q4, which brings a more streamlined roof shape that adds a little coupe style to the mix.

The first thing you’ll notice when jumping in the Q4 is that the wheel is an almost-square shape. Although it looks like it could be awkward to use, in practice it works really well – though the plastic buttons fitted to it feel a little cheap and flimsy.

That’s just about the only complaint though, as there are high-end materials used throughout and plenty of space on offer. Boot space measures 520 litres and can be increased to almost 1,500 litres with the rear seats folded – decent numbers, but not quite as much as you get in the Enyaq.

We tested a model in Sport trim, which starts at £44,275. That’s quite a lot of money, but the standard equipment makes up for it, including 19-inch alloy wheels and a 10.1-inch infotainment screen.

The Audi Q4 e-tron is yet another excellent electric vehicle. It feels like a real turning point for Audi, which is transitioning its range towards EVs with this spearheading its sales efforts.

Perhaps its toughest battle will come from within the Volkswagen Group, as it shares its underpinnings with so many other rivals that also cost less. It remains to be seen whether the premium allure of the Audi badge will be enough to make it a sales success.