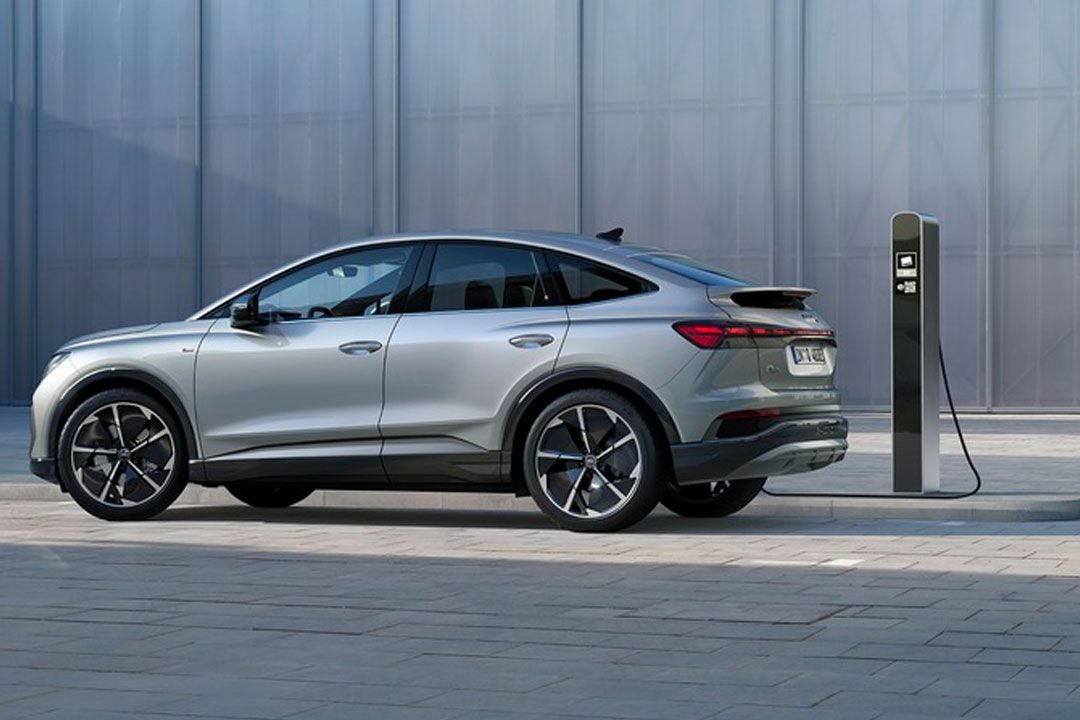 The new Audi Q4 e-tron Sportback is all of the above - and more. But is Audi’s brave step into the world of electric SUVs going to stir up the sector in the way that the German brand hopes?

The Sportback has a much more dynamic appearance than the Q4 SUV, with a roofline that tapers at a similar angle front and rear, with a short bonnet and stubby rear end. Matching side strakes front and rear give the impression of wide, bulging arches, while there are echoes of the original quattro in its trapezoidal profile.

The arches are filled by huge alloys ranging in size from 19 to 21 inches, while LED lighting profiles define the front and rear of the car – a red full-width LED light bar across the back and a choice of four different daytime running light configurations at the front, which you can adjust to your own preference. Audi has always done car interiors brilliantly and the Q4 e-tron Sportback is no exception, combining modern avant-garde style with clinical elegance, not to mention a host of cutting-edge tech.

The floor is wide and flat, with the EV architecture meaning there are no awkward exhaust or transmission tunnels to deal with – good news for rear seat passengers who have acres of legroom, though the Sportback’s tapered coupé style roof does diminish rear headroom and luggage space compared to the more conventional Q4 e-tron.

The boot capacity is still a reasonable 520 litres and Audi is very proud of the fact that the majority of the interior plastics are made of recycled materials, but this doesn’t make them cheap or nasty. Far from it, in fact, as the quality is excellent.

The dash is angular and futuristic, set off by a squared off steering wheel.

As standard, all trim levels of the Q4 e-tron get a 10.1-inch infotainment system with higher-spec cars also getting an 11.6-inch digital driver’s display. Whichever system you have will support Android Auto and Apple CarPlay, so you can mirror your smartphone and use its navigation and music-streaming apps.

There’s also an augmented reality head-up display, which works in conjunction with sat nav to beam helpful direction arrows directly at the turnings you need to take.

A full suite of driver assistance systems are also included. What trim levels are on the Audi Q4 e-tron Sportback?

In addition or replacement to Sport, S line trim highlights include:

In addition or replacement to S line, Edition 1 trim highlights include:

In addition or replacement to Edition 1, Vorsprung trim highlights include:

The Q4 e-tron Sportback comes with two different battery options. The first is a 52kWh battery that gives it 217 miles of range and the more expensive option is a 77kWh option that gives 328 miles of range.

Both are equipped with a 170bhp electric motor that sends power to the front wheels, and they’ll both accelerate from 0-60mph in nine seconds flat.

The most powerful version of the Q4 e-tron Sportback produces 299bhp and is the ’50’ e-tron with dual motors and four-wheel drive. This version comes with the same 77kWh battery as the Q4 ’40’ e-tron Sportback, but the all-wheel-drive layout reduces its effective range to 309 miles.

All versions support 125kW fast charging, which can add 80 miles of range in 10 minutes. Review of the Audi Q4 Sportback

Across nearly all of its SUVs there’s a sleeker, more aerodynamically-efficient version available.

Audi is big into the Sportback layout these days. Across nearly all of its SUVs there’s a sleeker, more aerodynamically-efficient version available and things are just the same with the new Q4 e-tron. As Audi’s latest electric vehicle it’s packed with technology, but this Sportback version brings even sleeker looks to the table.

So it takes the regular Q4 e-tron setup and adds in a more raked roofline for an even more eye-catching design. Let’s see what else it has to offer.

So obviously the biggest change here is that sleek new design, but elsewhere we’ve got the same clever powertrain and high-tech interior as with the regular Q4. It sits on the same MEB platform as cars like the Skoda Enyaq iV and Volkswagen ID.4, bringing a cleverly packaged interior that makes the most of the space available.

Up front, there are plenty of high-end materials and a sharp infotainment system, while an optional square-style steering wheel gives the cabin a futuristic feel.

The Q4 e-tron Sportback uses a fully electric powertrain, available with either a 52kW or 77kWh battery with the largest of the two bringing a range of up to 320 miles. In fact, you get slightly more range from the Sportback over the regular Q4, courtesy of its more aerodynamic shape.

A recent update also upgraded the charging speed of the larger-battery models, with this 135kW charging speed enabling a five to 80 per cent charge taking just 29 minutes.

The Q4 e-tron Sportback gives the kind of quiet, refined progression that you can only get from electric vehicles. There’s that instant availability of torque that helps to give this Q4 a healthy amount of zip away from the line and it’s this that’ll come as a surprise to people who haven’t driven an EV before.

It’s also quiet and refined on the motorway, though we’d have to add that the ride is a little firm at slow speeds - so opt for smaller wheels if you’re after the most comfortable ride possible. 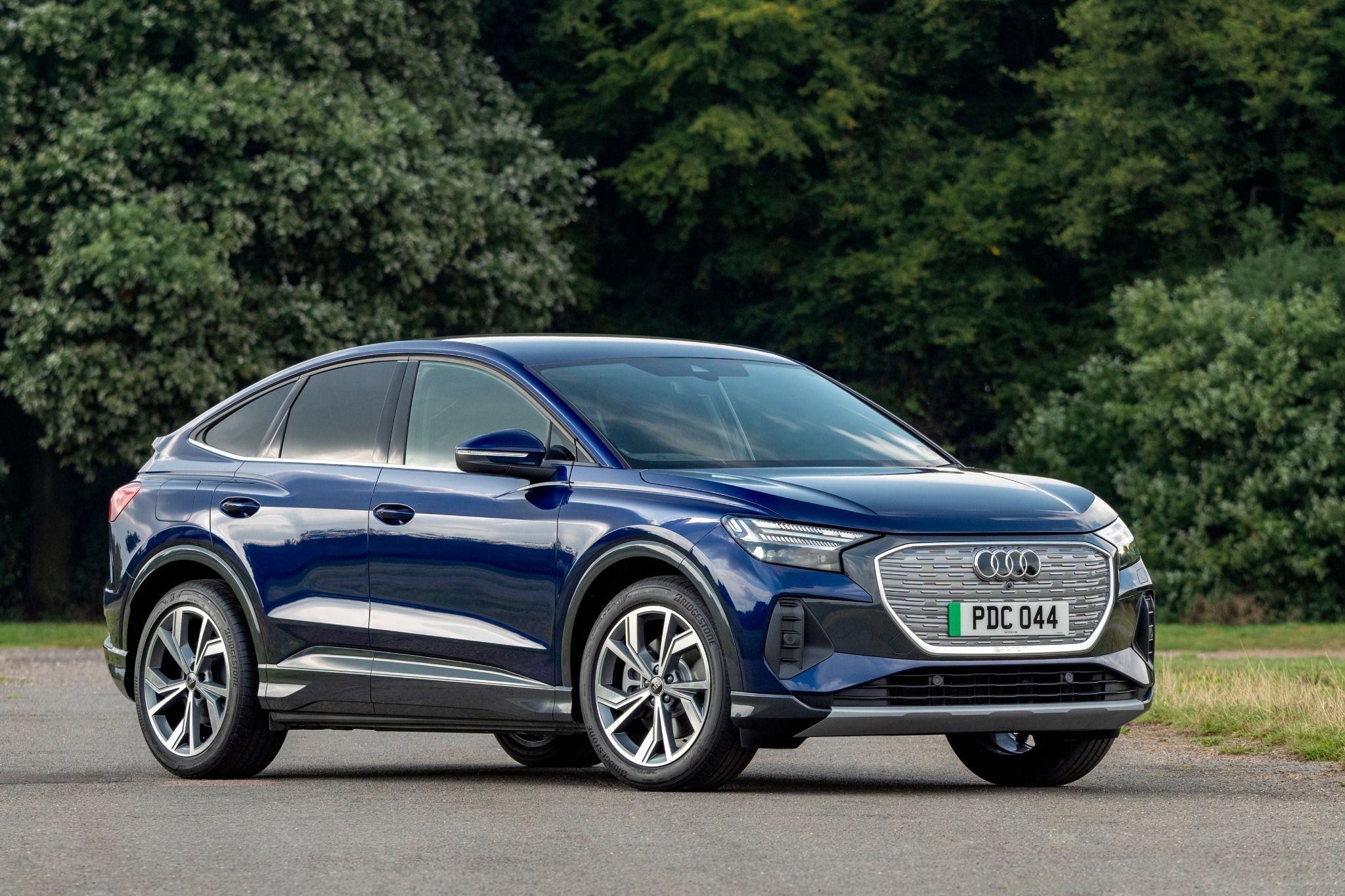 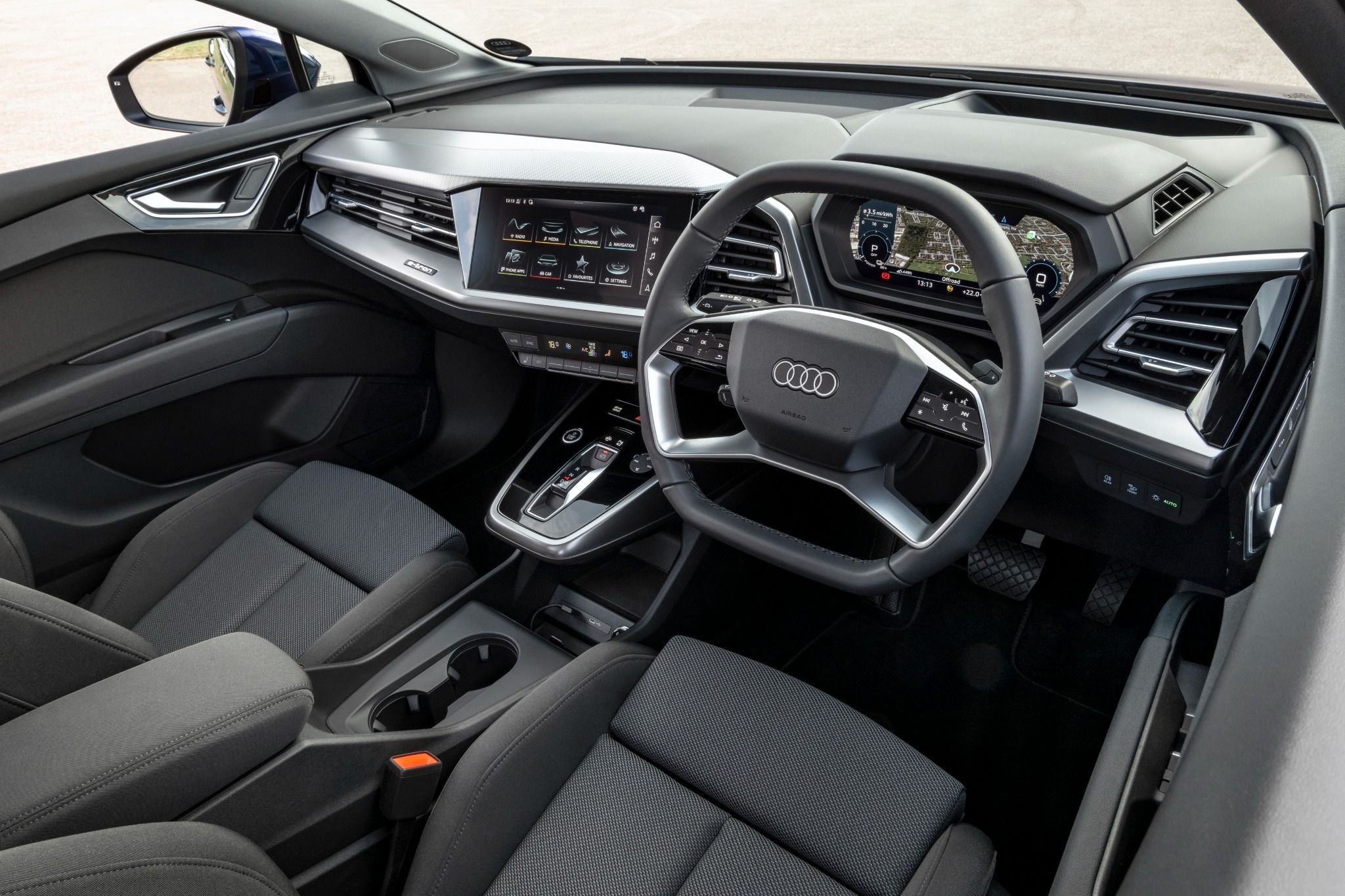 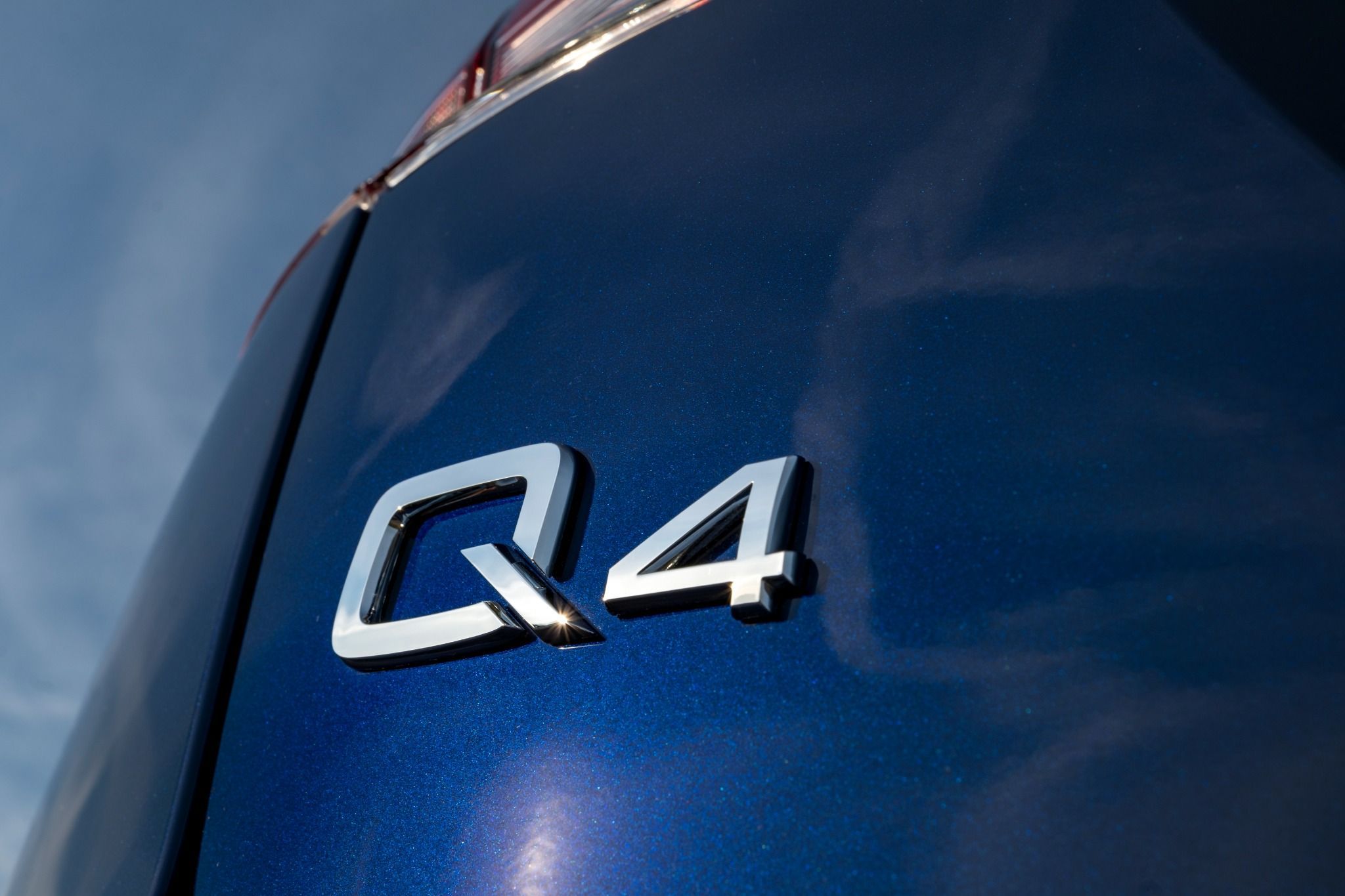 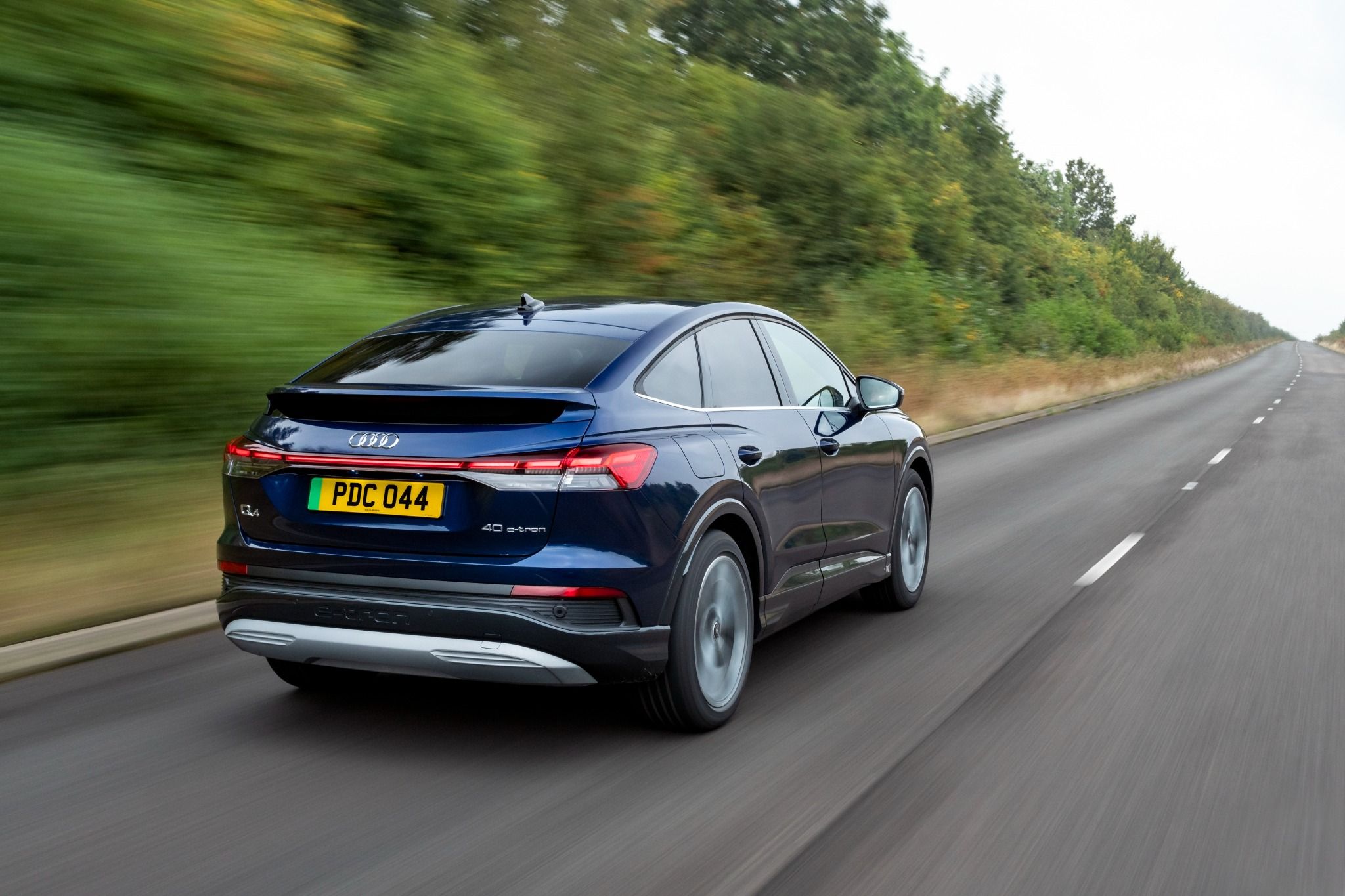 If you’re after a sleek-looking EV then the Q4 e-tron Sportback will be right up your street. There’s the huge Singleframe grille at the nose of the vehicle, while the rear of the car has that hallmark sharp cut-off and a cool spoiler section. It’s definitely recognisable as an Audi vehicle, that’s for sure.

It’s got some more conventional features, too. So while the large e-tron SUV has clever cameras on the wings, the Q4 makes do with standard mirrors. For some, this inclusion of ‘regular’ features might make the transition to an electric car a little easier.

As we’ve already mentioned, the Q4 e-tron sits on the Volkswagen Group MEB platform, so it has been designed first and foremost as an electric car, rather than adapted from existing petrol or diesel models. This means that there’s loads of space to play with inside, with rear-seat passengers in particular able to take advantage of a good deal of legroom and headroom.

When it comes to boot space, the Q4 does pretty well too. In fact, there are 520 litres to play with there, rising to 1,490 litres with the rear seats folded down.

All Q4 models come with plenty of equipment as standard, with the car’s 10.1-inch infotainment system acting as the focal point to the forward part of the cabin. Fortunately, it’s clear and easy to use, while systems such as Apple CarPlay make integrating your smartphone into the system a bit easier.

All cars get three-zone climate control as standard, too, alongside LED headlights and Audi’s clever Virtual Cockpit system ahead of the driver.

The Q4 e-tron Sportback is a fine addition to Audi’s range of electric vehicles. Sure, the standard Q4 offers plenty of attributes, but the added styling impact brought on by the Sportback means that it’ll no doubt prove a hit with those who like to make a statement.

Slightly fidgety ride aside, it’s also comfortable and refined, while a decent range means that it’s still a great choice for those who like to do longer distances as well.