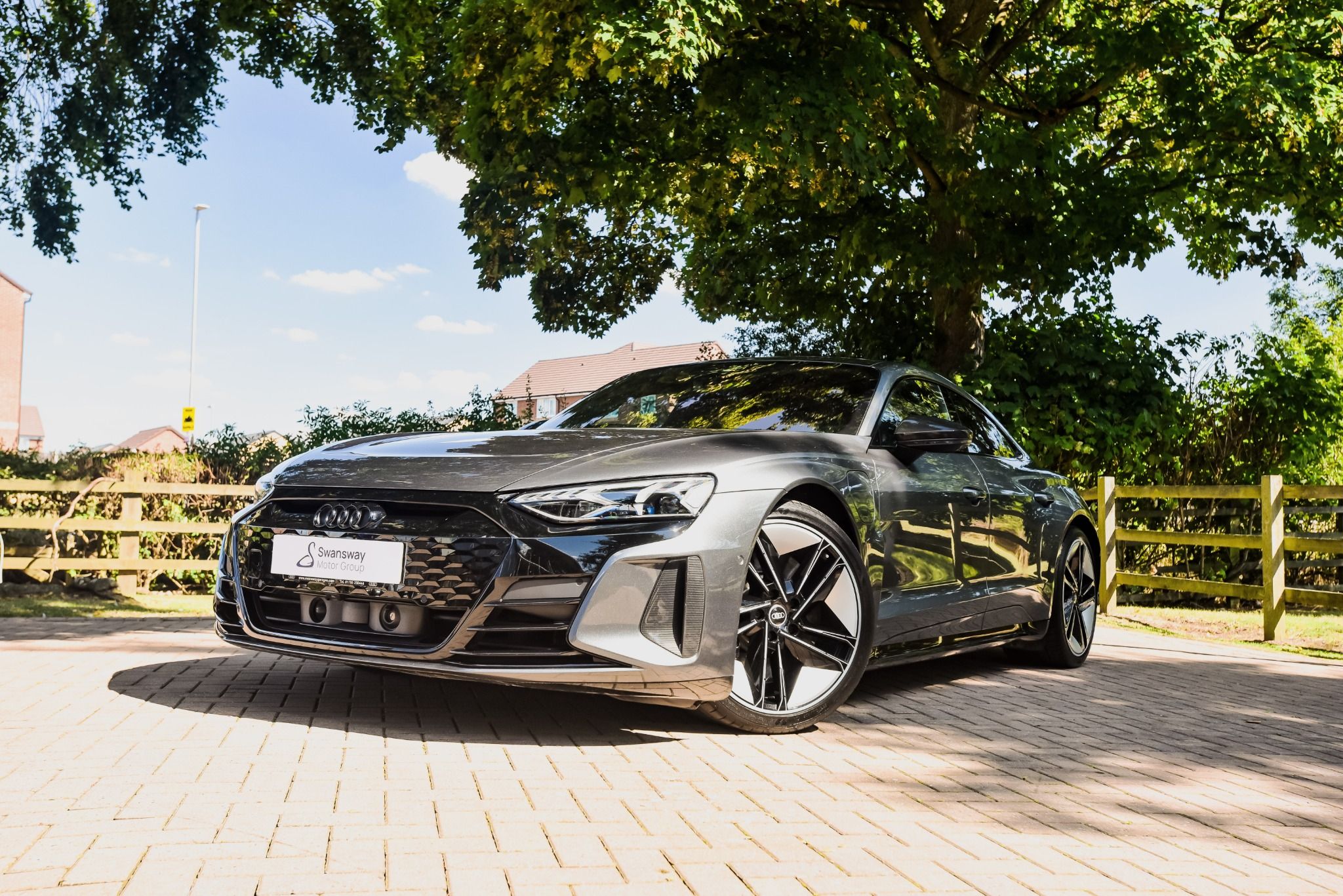 The new Audi e-tron GT is an electric car which takes its place at the very top of the firm’s range of EVs. Built alongside the legendary Audi R8 in Germany the e-tron GT has the sportiness, exclusivity and comfort you're looking for.

Charging towards the future

An 800-volt lithium-ion battery is integrated into the flat underbody, offering extremely high performance, both whilst charging and driving. When used in combination with the recuperation system, it can provide a range of up to 298 miles giving you the freedom to enjoy your journey without unneeded stops.

Inside you're surrounded by simplicity at every touch with a light-filled cockpit thanks to a fixed glass panoramic sunroof giving a bright open feel. A range of infotainment options give you navigation, communication and information all at your fingertips via a 12.3" virtual cockpit or central 10.1" MMI touch display.

Given that it’s underpinned by a cutting-edge electric powertrain, it’s fair to say that the e-tron GT’s propulsion is one of the key pieces of technology it offers. It combines two electric motors - one on each axle - with a 93.4kWh battery. As well as a range of over 250 miles, the e-tron GT should go from 0-60mph in under three seconds and top out at 161mph.

Plus, thanks to rapid charging compatibility, a zero to 80 per cent charge could take as little as 22 minutes.

Unmistakable as anything other than an Audi with an ultra-wide grille with the famous four rings, the e-tron GT is sleek, yet purposeful, with more than a hint of R8 about it.​ Though the GT is a four-door, the rearward doors have been cleverly integrated into the design to give the e-tron a look of a coupe about it.

Aerodynamically shaped air inlets at the front of the e-tron GT and vented wheel arches give you as a driver all the efficiency you need on the road. Take a look at the striking rear diffuser and quattro blister and you'll really see the design icon shine through.

The all-important charging port is located on the flank of the car, while the whole vehicle measures up at around the same length as the current A7 - though it sits some 50mm lower than its conventionally driven stablemate. 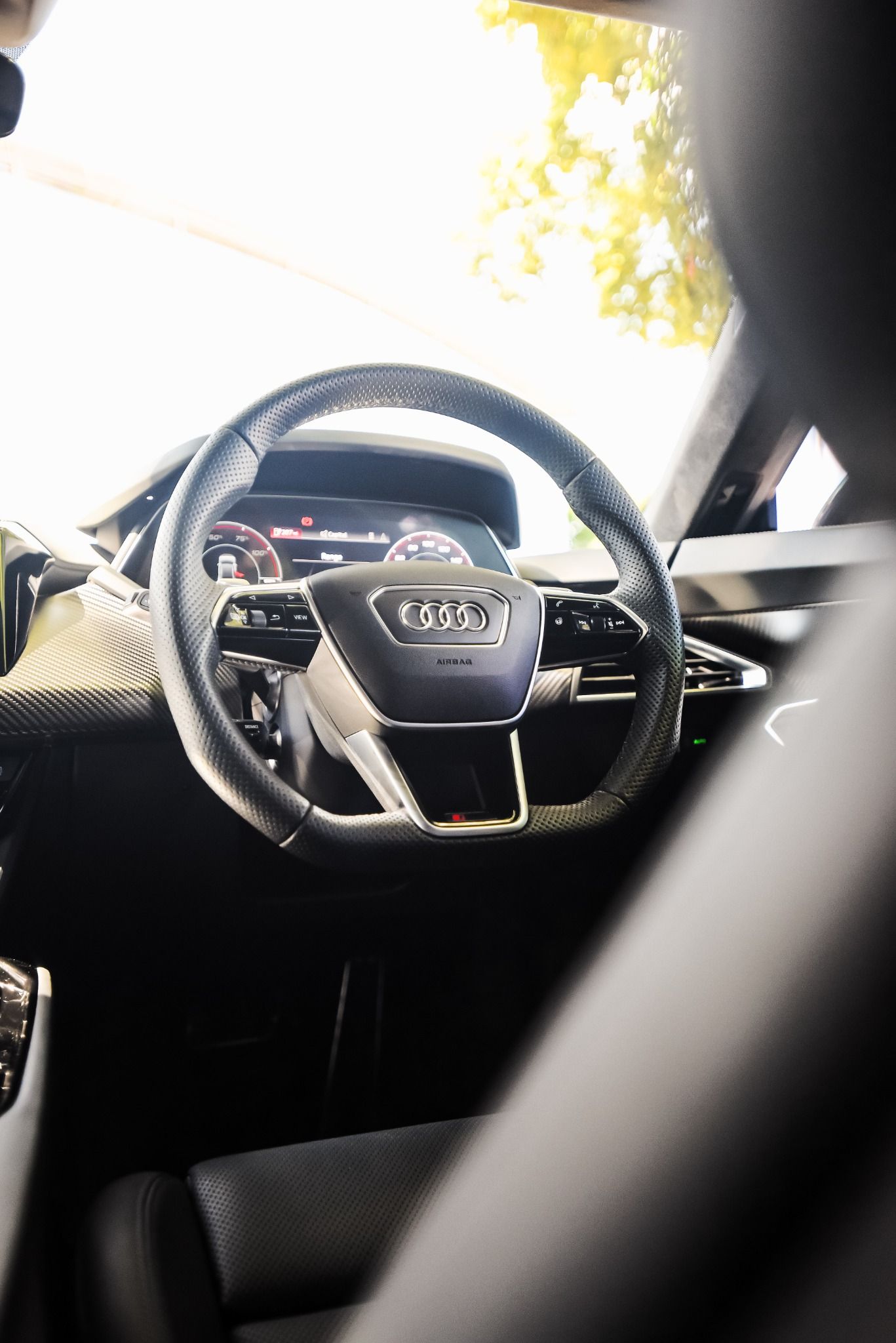 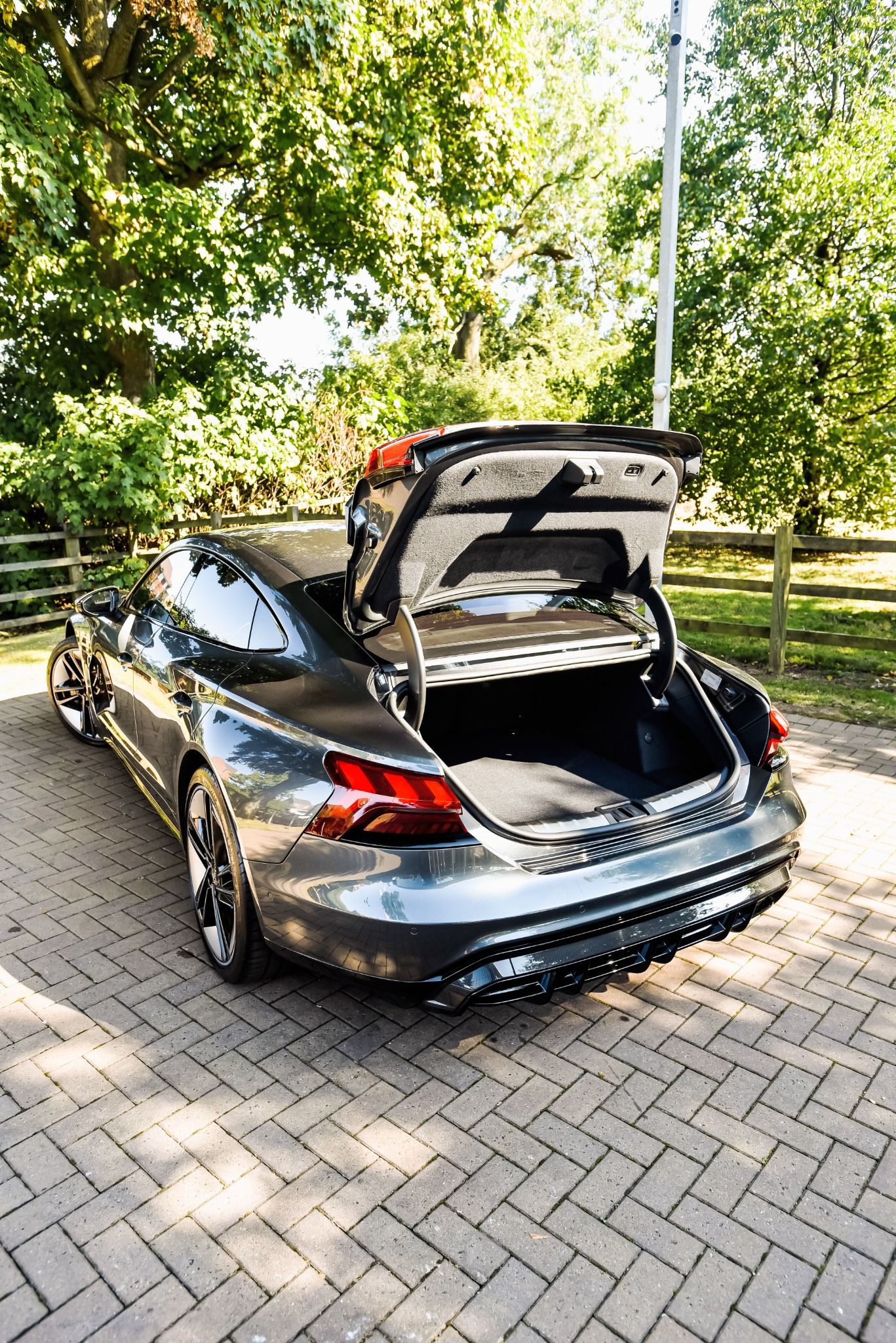 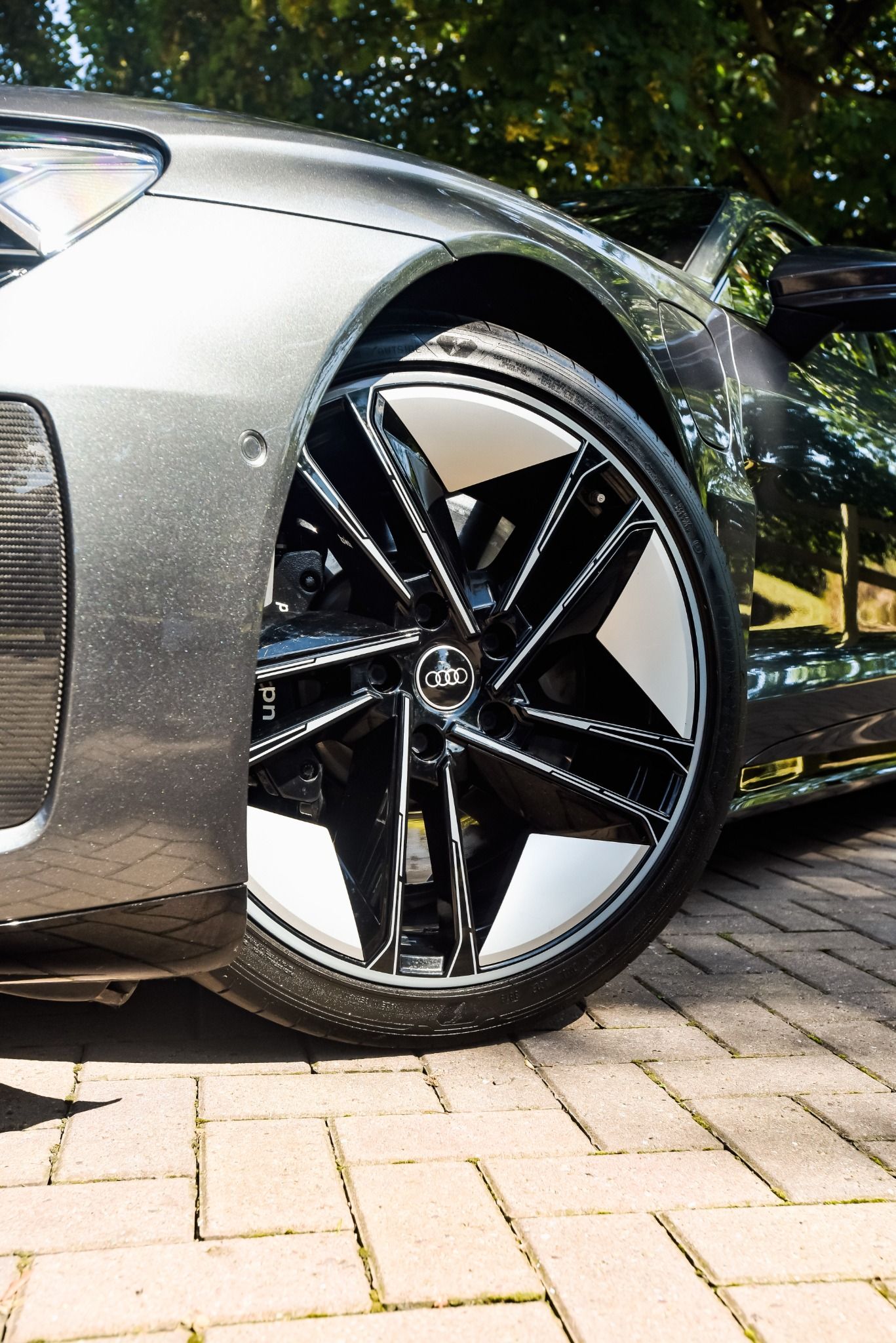 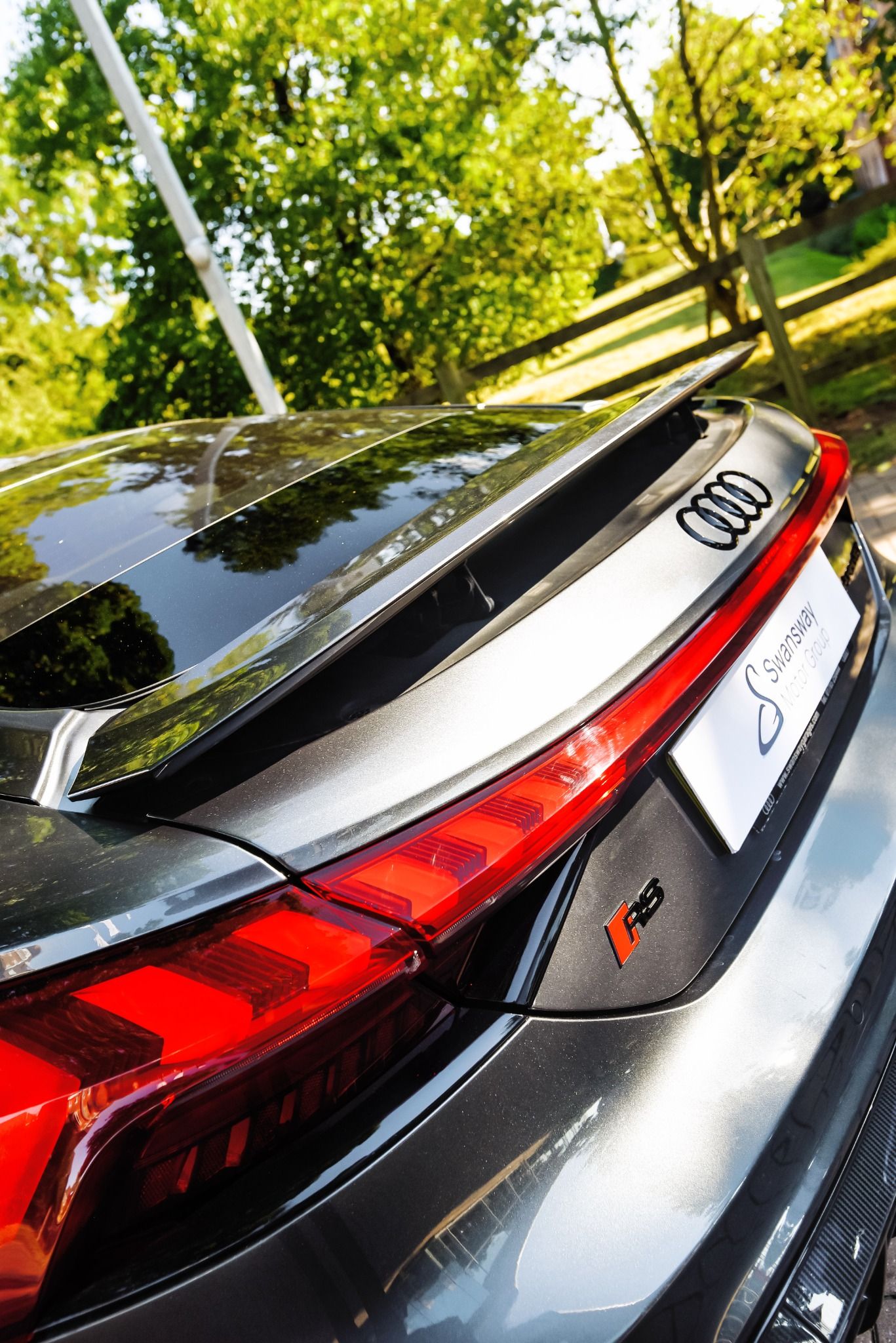 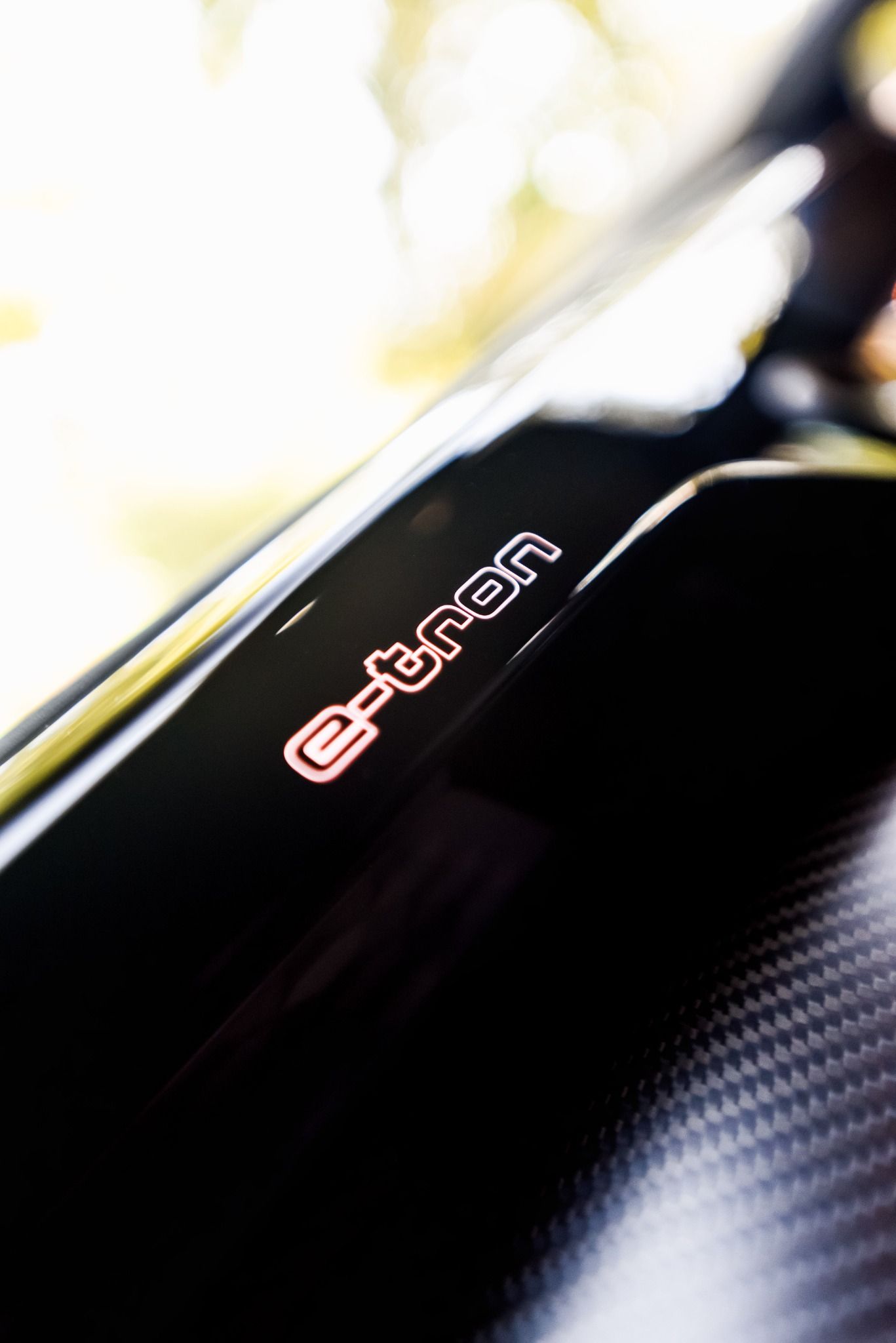 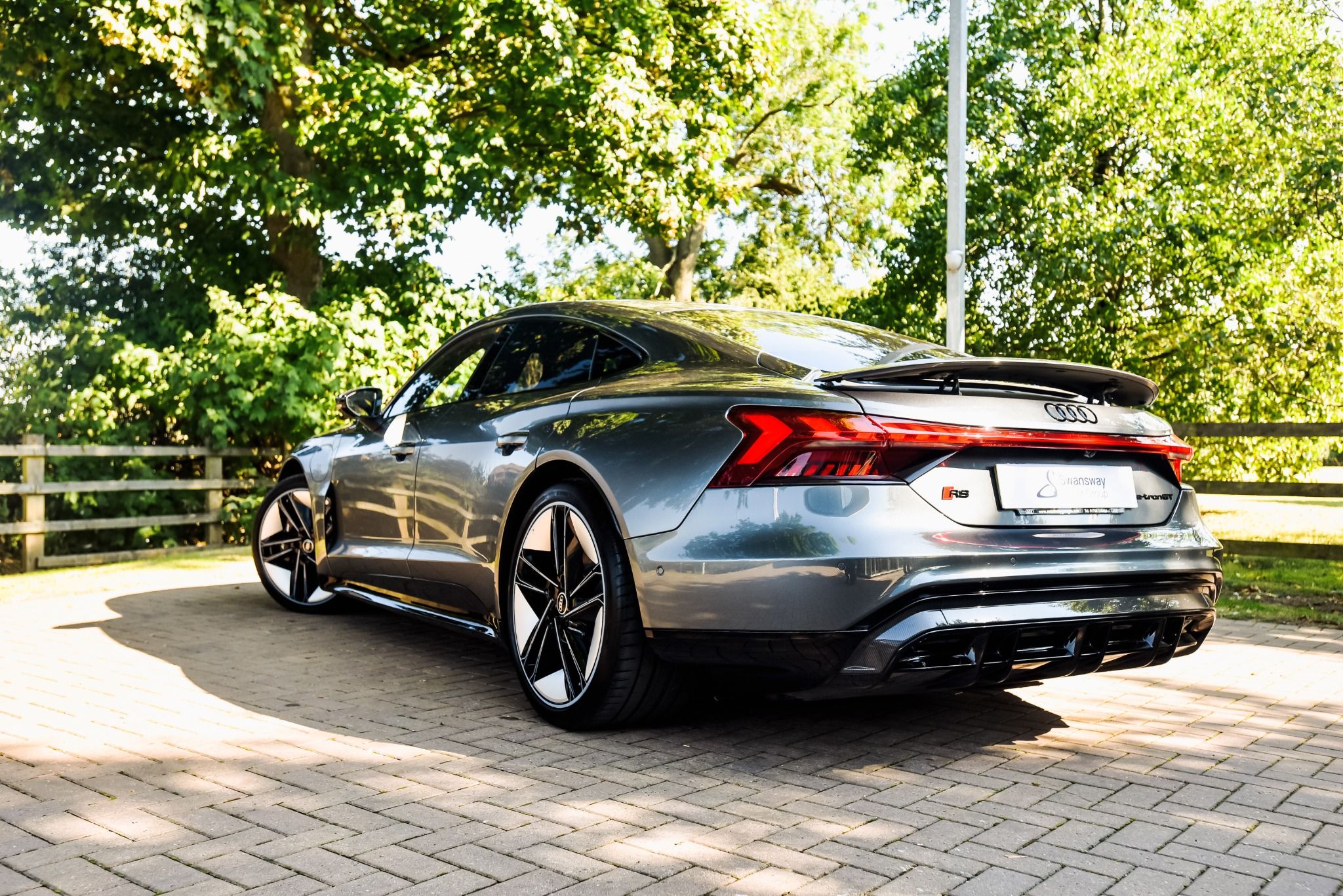 What trim levels are on the Audi e-tron GT?

The 646PS RS e-tron GT achieves 0-62mph in a staggering 3.3 seconds. With separate motors driving each axle, power is evenly distributed. And with adaptive air suspension, rear wheel steering, sports differential and electronic torque vectoring all as standard on the RS e-tron GT, handling is as exhilarating as accelerating.

Streamlined, wide and low, the first electric models in the Audi Sport range have a powerful presence. Largely assembled by hand. Audi craftsmanship is in-built. From single-frame honeycomb grille to tapering roofline - and accentuated by the details of the Black styling pack on the RS e-tron GT - the look is unmistakably Audi.

The RS e-tron GT is packed with technology such as pre-sense, Adaptive cruise control, a 360° camera and Remote parking pilot. 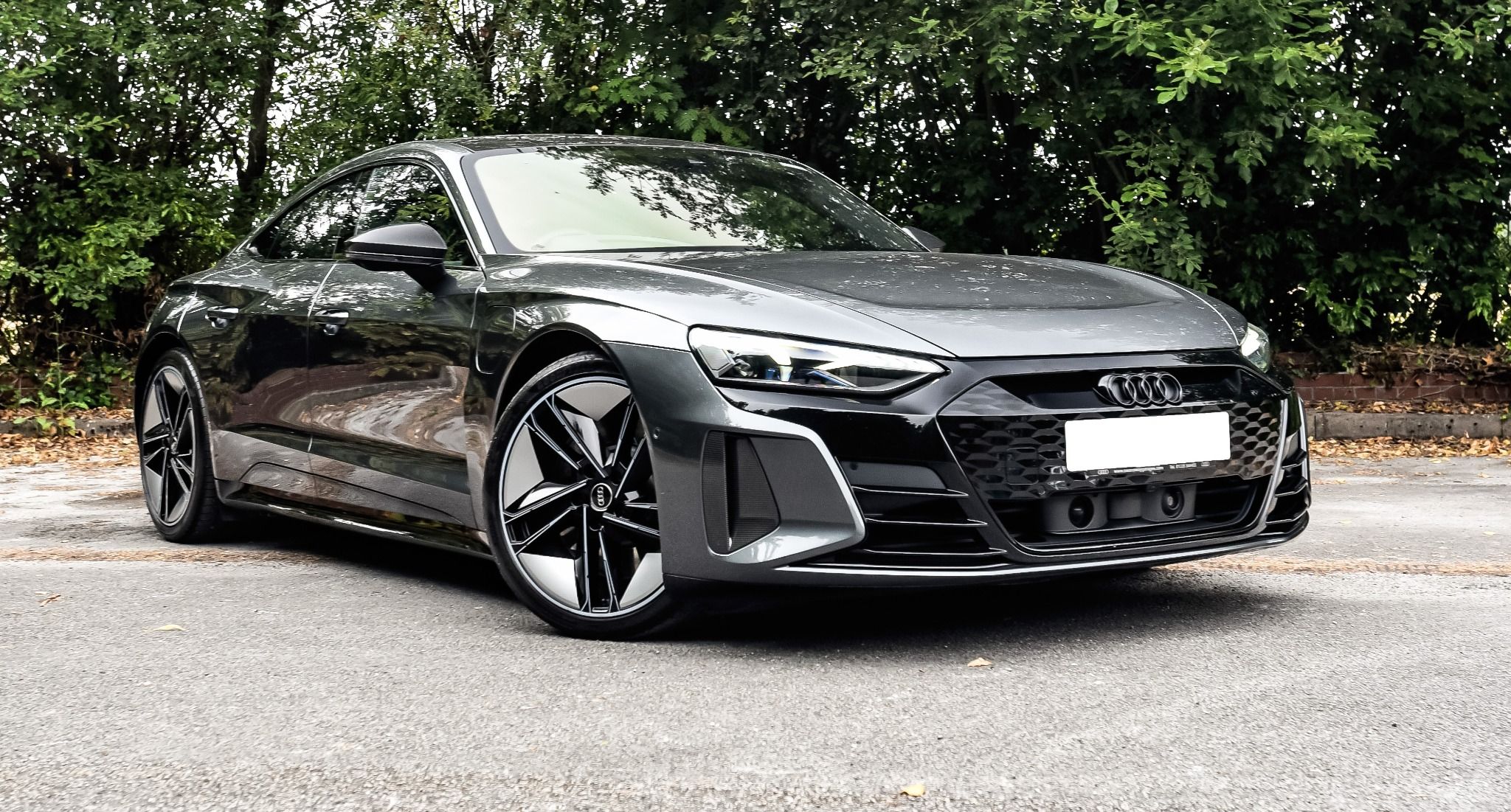 The new Audi e-tron GT has arrived as the firm’s range-topping electric model. With so many features on board it’s easily one of the most tech-heavy cars Audi offers - so let’s dive right in and find out what it’s all about.

The e-tron GT is underpinned by the same platform that you’ll find underneath the Porsche Taycan, combining a pair of powerful electric motors with a large battery. It also has the ability to charge at speeds of up to 270kW, which could add 62 miles of charge in as little as five minutes, or take charge levels from five to 80 per cent in just 23 minutes.

The e-tron GT also incorporates Audi’s famous quattro-all-wheel-drive system for better traction and there’s the option of a more powerful RS version, too. ​

As we’ve already mentioned, the e-tron GT uses a dual-motor setup, with one on the front axle and another at the rear. You get 470bhp combined, though this can be boosted to 523bhp for 2.5 seconds when using launch control. It allows for a 0-60mph time of just 3.9 seconds and a top speed of 152mph.

Audi claims that the e-tron GT will manage 295 miles from a single charge, and while rapid charging does bring quick charge times, plugging the e-tron into a regular home wallbox will result in a still-respectable full charge completed overnight.

It’s testament to Audi’s build quality that the first thing you notice when moving away in the e-tron GT is a complete lack of any squeaks or rattles. A silent electric powertrain always highlights any issues in fit-and-finish, but thankfully there are none to report in the GT.

The ride is also excellent, while the electric powertrain gives the e-tron GT an impressive turn of pace; press the accelerator for only a few moments and you’ll find yourself very quickly arriving at legal speed limits. There’s only a small amount of tyre noise to contend with, but the overarching impression of the GT is that it’s a car you’d happily spend many hours behind the wheel of.

The e-tron GT is a striking-looking car to say the least, with all manner of exciting design touches incorporated into the car’s aesthetic. The front end is angular and hard to miss - particularly thanks to a huge Audi badge on the nose - while around the back the full-width light bar gives it a distinctly futuristic appearance

At 4.99 metres it’s a very long car though, which does mean you have to take extra care when positioning the car at slower speeds or tackling sharper corners. ​

The interior of the e-tron GT will be familiar to anyone who has spent some time in any of Audi’s recent vehicles, though it does away with the dual-screen setup we’ve seen on cars like the A6 and Q7, instead favouring a single display which is fitted alongside a range of traditional physical buttons. There are plenty of high-end materials in here too, while the seating position for both people up front is excellent.

There’s a decent amount of space for those sitting in the back too, though headroom might prove to be a bit tight for taller passengers. You also get a decent-sized boot, though much of its space is taken up by the charger cables, while a secondary load area in the nose is helpfully deep. ​

The 10.1-inch screen in the middle of the dashboard is where you’ll access media and satellite navigation functions too and it’s here that you can adjust various elements of the car’s setup, too.

The e-tron GT is a real showcase of Audi’s commitment to electrification. This flagship model shows confidence in the technology, on top of its existing prowess with the standard e-tron.

With eye-catching looks and an impressively refined driving experience, the e-tron GT is a genuine all-rounder and one which shows that electric cars needn’t be boring to be capable.