The All-New Audi A6 Avant is a real eye-catcher.

The All-New Audi A6 Avant provides excellent adaptability and the everyday utility expected from a family-sized estate vehicle. With a 4.94 metre long body, large surfaces and an extended front-end, the A6 Avant gives an image of both sporty and muscular with sophisticated and elegant.

HD Matrix LED headlights and new tail lights featuring a special light signature can also be found on the A6 Avant's exterior along with a wide single frame grille and a low profile D-pillar.​ 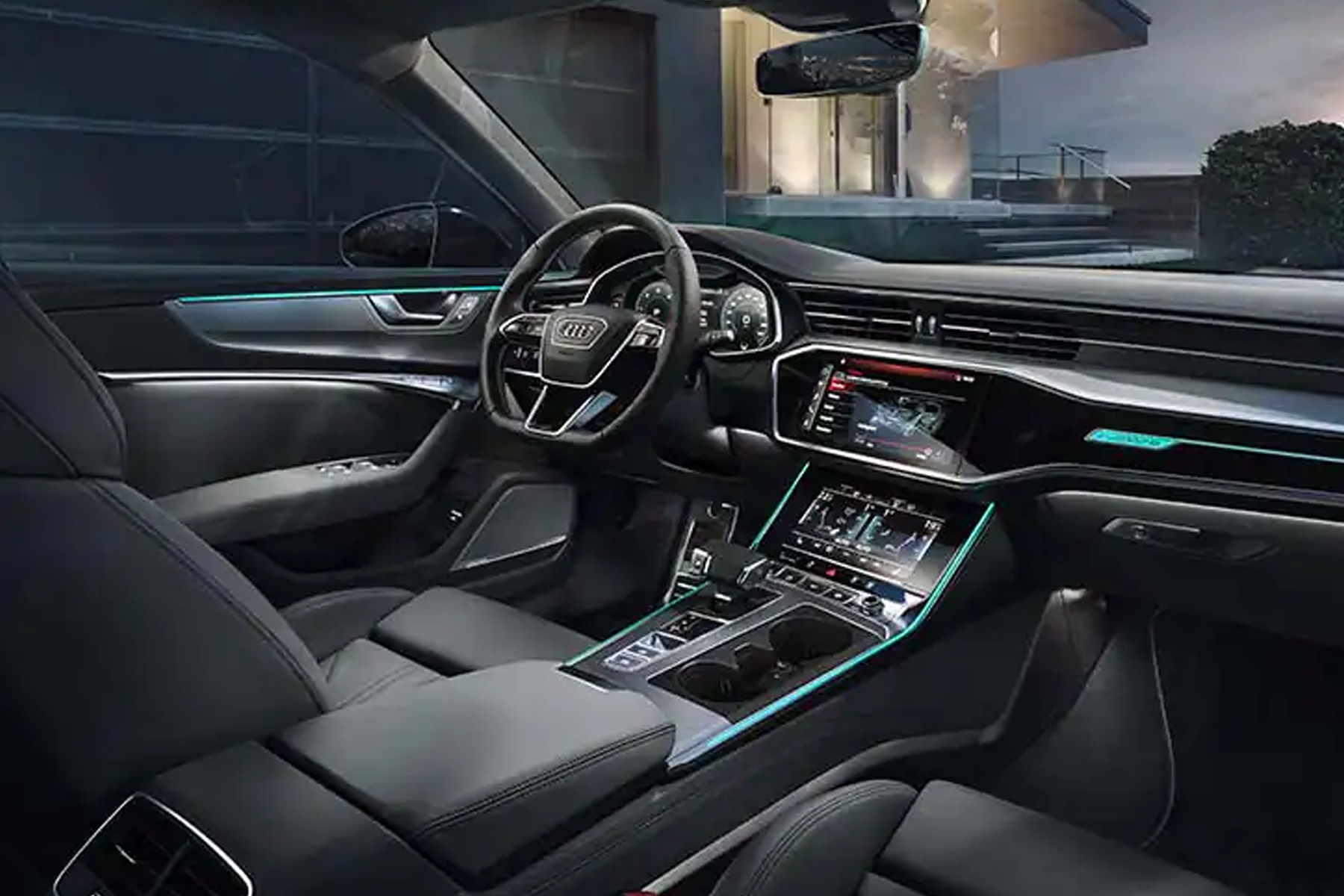 Inside the All-New A6 Avant you will find a stylish yet minimalistic design featuring soft leather, rich woods and even the option of interior fragrancing. In the rear, you can expect to find a 1,680 litre maximum luggage capacity to fit in all you could ever need.

Two MMI touch screens can be found in the centre console, an upper screen of 8.8 inches and a lower screen of 8.6 inches enabling you to have full control at your fingertips. As well as Intelligent voice control and an onboard WiFi hotspot.

There are four suspension options on the A6 Avant that all work in balance between driving comfort and handling agility. The optional dynamic all-wheel steering can provide the perfect capability on the roads.

As well as the latest technology, interior luxury and sharp, flowing exterior looks, the A6 Avant also takes on board standard mild hybrid drive.

Equipped with the latest in Audi technology, you will find an extensive range of driver assistance systems inside the all-new A6 Avant. City Assist Pack provides additional safety features, The Tour Pack includes adaptive cruise assist and efficiency assist that predictively factors in speed limits, bends and roundabouts. For extra peace of mind, Emergency Assist also recognises when the driver fails to act and provides a visual, acoustic and haptic warning. Emergency Assist can also detect when to make emergency calls if necessary.​ 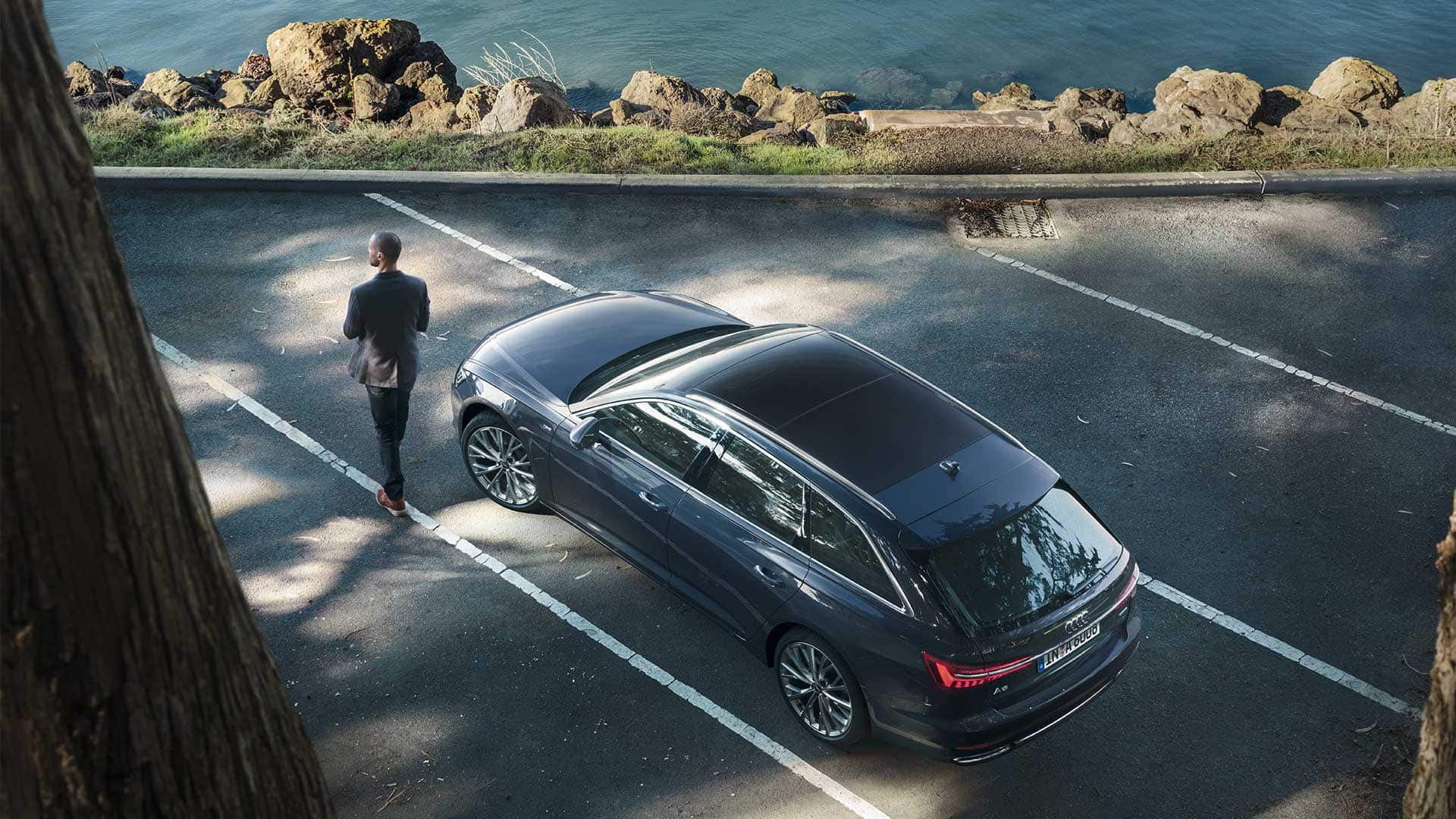 The exterior shape of the Audi A6 Avant TFSI e is taken from the classic Audi A6 Avant model, the estate models come with plenty of space for the family. Enjoy matrix LED headlights, which can be adjusted individually according to the situation, along with dynamic indicators from S line trim up. Upgrade to the Black Edition to add a stealthy look with a full black radiator grille, frame, front and rear air intakes, window trims, door mirror housings, rear spoiler and S line side skirts in high gloss black.

Meshing together petrol and electric performance is a great way of giving a car a little more punch while also helping in the economy and emissions departments. This A6 Avant hybrid is available in two states of tune - badged 50 and 55 - with the former producing 249bhp and the latter 362bhp. They both use the same turbocharged 2.0-litre petrol engine, however, linked to an electric motor.

Both cars can travel for up to 34 miles on electric power alone at speeds of up to 84mph. However, either one is no slouch, reaching 60mph from a dead stop in just 5.3 seconds. Charging will take around 2.5 hours via a domestic wallbox. What trim levels are on the Audi A6 Avant?

In addition to Black Edition:

Audi, despite its myriad of SUV and crossover offerings, still makes produces two estate cars – the A4 Avant and this, the all-new A6 Avant. Though it’s hard to deny the appeal that the four-wheel-drive market is currently experiencing, the everyday estate car is still there for those who want space, practicality and ease-of-use wrapped up in a more road-friendly bodystyle.

Audi’s new A6 boasts more technology than ever before, along with a pair of efficient diesel engines too. We’re testing it here in range-topping S Line specification.

It was no small task to replace the old A6 Avant. The previous car had proved immeasurably popular, with sleek, elegant and understated styling somehow managing to defy time. So when it came to revealing the new one, there was a fair amount of expectation mounted on to it.

Fortunately, we needn’t have worried. The new A6 Avant arrived with the same classy approach to exterior design and interior layout. There are improved materials, a good amount of standard equipment and, as before, a brilliantly large boot.

You’ve actually got just two engine options available with the A6 Avant. There’s a range-topping ‘50’ 3.0-litre six-cylinder diesel with 282bhp, or the entry-grade ‘40’ 2.0-litre four-cylinder diesel, which is the one we have here. It produces 201bhp and 400Nm of torque, and it’s driven to the front wheels in our test car via a seven-speed automatic gearbox. Of course, Audi’s quattro all-wheel-drive system is available as an extra, and there’s good reason to specify this – though we’ll come to that later.

It’s certainly the engine choice for those who want reasonable economy figures. Audi claims 57.6mpg combined (with cars running 20-inch alloy wheels, like ours), alongside emissions of 129g/km CO2. Though these figures are good, it doesn’t mean the A6 Avant is underpowered – 0-60mph take a respectable 8.1 seconds, with acceleration topping out at 149mph. The A6 Avant has always famously been an accomplished long-distance cruiser and this latest version is no different. At motorway speeds it’s remarkably hushed, with the engine making next to no audible intrusion on the cabin. The steering has a good weight to it (albeit with little feel), and there’s more than enough power on tap to make overtaking or merging an easy task indeed.

It’s at lower speeds where the effect falters somewhat. The issue lies predominantly with the gearbox, which can be sluggish to send power to the wheels when pulling away from a dead stop. It means that if you want to make a quick dash into a roundabout, or briskly leave a junction, then you can be left waiting for the power to arrive. It quickly gets tiresome.

And when that power does eventually arrive, it can often be too much for the front tyres to cope with. Driven gently the powertrain doesn’t trouble the forward rubber all that often, but push the throttle with a little more fervor and you’ll likely feel the front wheels scrabbling for traction. We’d opt for the quattro system to avoid this.

As mentioned earlier, the A6 Avant’s design still toes on the understated side of things and, for most, that won’t be bad thing whatsoever. Yes, the front grille is almost obscenely large and there’s all manner of chrome accents dotted across the exterior car, but it’s not an ostentatious design – far from it.

It’s a big car, too, but somehow Audi has managed to disguise its sheer size with a variety of cut lines and trim pieces. It’s been quite successful in hiding the car’s overall bulk, and it means that the A6 Avant looks more dynamic than other estates.

Audi’s on a bit of a roll when it comes to car interiors of late; the new Q8’s cabin is effortlessly stylish, and even the compact A1’s cockpit feels almost surprisingly well-made for a compact hatch. It’ll come as no surprise then that the A6 Avant’s cabin is very well made.

High-quality materials have been used throughout the interior, and everything feels very well put together. It’s centred around a widescreen infotainment system which dominates the cabin, but when combined with the high-definition Virtual Cockpit makes for a very high-tech feeling place to be.

Our car, as mentioned, came in top-spec S-Line trim. It means you get a full sports styling kit with a dynamic front splitter design. As well as that, you get a lowered sports suspension setup, and Audi’s excellent Matrix LED headlights paired with scrolling rear indicators. You also get 19-inch alloy wheels as standard, though the ones on our test car had been upgraded to larger 20-inch units which were accompanied by a fearsome £1,550 price tag.

S Line cars get a full navigation system, though we’d argue that it’s worth adding the technology pack for £1,495. This brings with it a 10.1-inch top screen system, accompanied by an 8.6-inch screen underneath it to control heating and ventilation functions. You also get the 12.3-inch virtual cockpit system, which replaces the traditional dials and looks fantastic.

Audi’s latest A6 Avant is a dependable, comfortable and refined long-distance load-lugger – just as it always has been, historically. The newly-updated cabin feels special too, and elevates the feel of the car far above that of just a usual ‘estate’. We’d argue that quattro really needs to be added to the package to make it fully rounded – particularly in the UK, where the weather often requires better traction than in most countries – but save for that, this is one accomplished wagon.