Nestled between the A3 Saloon and the A6 version, you will find the versatile and professional Audi A4 Saloon. With 11 engines to choose from and three different trim levels, there is an A4 Saloon to suit every professional, family and adventurer.

Part of Audi’s mid-size range, the A4 is relatively compact in size. It mirrors others in the marque’s prestigious series with an oversized grille, rounded bonnet and sharp headlights.

Both the SE and the Sport trim levels have Xenon headlights with LED daytime running lights, adding to the smart profile. The S line trim has dramatic LED headlights. Heat-insulating glass on the windows and windscreen and acoustic glazing serves to keep the interior warm and reduce road noise. The high-gloss package comes as standard on all trim levels for a deluxe finish to the exterior. Inside the A4 Saloon, the eye is immediately drawn to the seven-inch MMI screen that sits in the centre of the dashboard. Mirroring a tablet, this easy-to-use screen comes with the Audi Smartphone Interface which gives you easy control of your phone and selected applications. Upgrade to the MMI Navigation and let the inbuilt navigation plan the easiest route. For driver and passenger comfort, all trim levels come with three-zone climate control, a multifunction steering wheel and central armrests. The extensive series of engine choices ranges from the 1.4-litre petrol, delivering 158bhp, through to the 3.0 V6 quattro diesel which packs 268.3bhp. Top speeds vary from 130mph to 155mph, and all have fuel injection technology for extra fuel-efficiency. Only available for the S line, the most powerful engine, the 3.0-litre V6 quattro diesel, will take you from 0-60mph in around five seconds. As much as 120kg has been removed from the latest generation A4 Saloon making it more responsive than ever.

Advanced safety and technology features come as standard so all drivers enjoy a comfortable ride. Cruise control with freewheeling capability, keyless go and parking sensors allow the driver to relax. The A4 Saloon also has pre sense city, a system that helps prevent collisions by alerting you to possible hazards 100m away when travelling at 50mph. Electronic Stabilisation Control with an Anti-lock Braking system and Anti-Slip Regulation helps you to come to a halt when you need to. What trim levels are on the Audi A4 Saloon?

In addition to Technik:

It’s the A4 everyone wants, but is it worthy of such acclaim? We get behind the wheel of the 187bhp A4 TDI S line to find out.

The A4 has taken a quantum leap forwards with its latest generation, having inherited refinement boosts like £200 ‘acoustic glazing’ from the sublime A6, and new engines with amazingly low official emissions.

The S line car you see here is the range-topping trim, complete with (optional) large RS alloy wheels, sports seats trimmed in special upholstery, loads of equipment and gadgets and the availability of more powerful engines.

The latest 2.0-litre diesel is in imperious form in 187bhp guise. It’s quiet and refined beneath the A4′s impressive soundproofing measures, and it tootles along through town and country like a true modern gentleman’s chariot. Put your foot down, though, and the thrust on tap swells up from nowhere, powering the A4 through overtakes with creamy acceleration.

The A4 stops on a sixpence, turns accurately once the initial delay in the steering response passes, and grips like a limpet. The front end starts to feel heavy once you start pushing on, but it’s no big deal. Much more annoying is the oddly un-German two-button drive mode selector, positioned too far down and all the way on the far side of the centre console. It takes actual concentration to find the buttons and select the mode you want, where a simple dial would have been so much better.

The ride quality is good, considering the gargantuan wheels beneath the arches. They introduce a sharper edge to bumps but the low-speed damping remains excellent. It can’t match an A4 on smaller wheels for long-distance comfort but, for the aesthetic gains S line brings, you can understand why people make the sacrifice 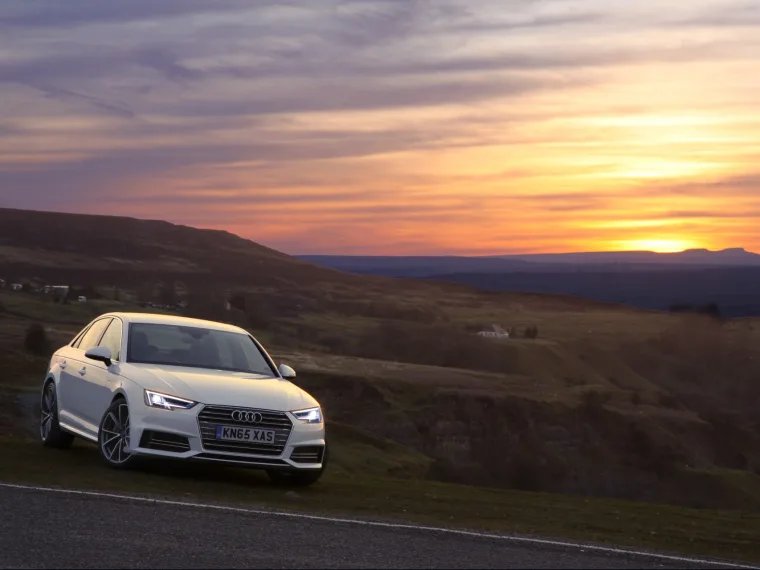 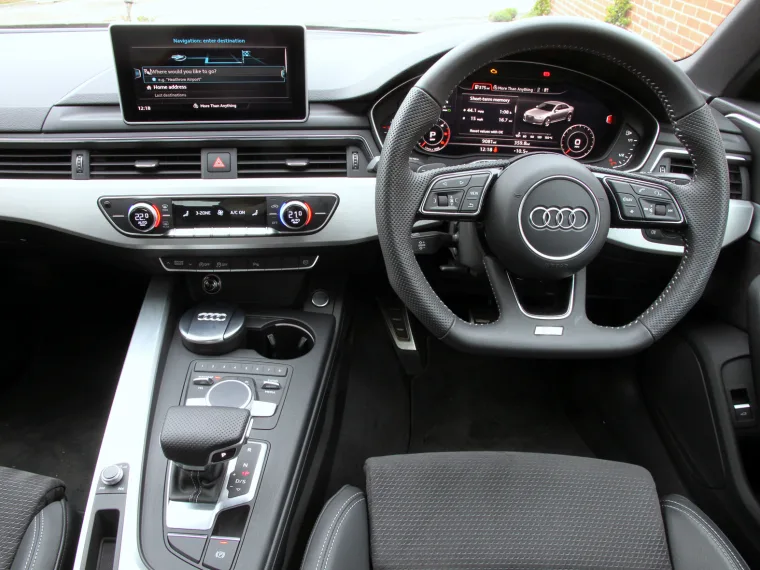 There are few saloons that can match the showroom appeal of a clean A4 in S line trim. Speaking as a journo who generally doesn’t like white cars, this one, on its darkened 19-inch light-alloy wheels and low-profile Hankooks, looks absolutely superb after a hose down.

It’s a car that divides opinion on the road. Some people admire it and others despise it, partly due to the reputation German saloon drivers have for being, how shall I phrase it… impatient? However you view it there’s no arguing that the A4 has a strong image – all the stronger when its sharpened lines are twinned with this trim level.

A driver over six feet might need to push their seat back far enough to squeeze into a rear passenger’s knee room, and since the seat backs are covered with hard plastic that’s not especially good for Johnny Rear-Seat. Channels are cut down the front seat backs to improve the knee room a fraction more.

The boot is huge, swallowing large cases and coming back for more. There are also rails for using luggage dividers and barriers to stop things sliding around as much as they might, plus a 12v socket as part of the £175 Storage Pack. In the cabin there’s a similarly impressive range of places to store everyday bits and pieces, along with the option to add a cupholder-based ashtray/waste bin.

With the S tronic gearbox, which is a bit snatchy away from a standstill, this high-spec A4 weighs in at over £33,300. With the options on this car that rises above £40,000. It’s a remarkably good car for all sorts of purposes; a real everyman’s everything with tangible high build quality, but lots of the things that make it look and feel special are cost-options. It can be a bit demoralising in the showroom.

Executives, family men and women, young self-held go-getters; these are all the sort of people who would want the A4 S line. It’s a lot nicer than your average mid-size hatchback, with the right image and the mechanical prowess to back up the style. It may not come cheap, once you’ve added all the options you want, but it really is very good at what it does – which covers most things.

Facts at a Glance