WIth hybrids becoming much more popular on the second hand market, check out our Volkswagen Golf GTE review.

Why Should I buy a Used VW Golf GTE?

The Golf GTE has been designed to offer the exceptionally low running costs of a plug-in hybrid with the involving drive of a sports hatch. Powered by a 1.4-litre turbocharged petrol engine linked to an electric motor, the GTE has a claimed economy of 156.9mpg and yet, despite this, should crack 60mph in under eight seconds. Of course, being a Golf it also affords its owners a high level of build quality, along with a good dose of practicality.

The main talking point of the used GTE is its powertrain. Underneath the bonnet sits a 1.4-litre turbocharged petrol engine, which is combined with an electric motor to produce 201bhp and 350Nm. Power is sent to the front wheels via a six-speed dual-clutch automatic gearbox.

With a theoretical range of 580 miles, the GTE is ideal for those looking to do low-emissions, high-mileage journeys.

The exterior has also been updated to differentiate the GTE from the rest of the Golf range, meaning you’ll find C-shaped LED daytime running lights as well as blue accents across the radiator grille – replacing the standard GTI’s red version.

Regarded by the motor industry, as one of the finest hybrid cars on the market; here's what we thought of the used Volkswagen Golf GTE.

The 8.7 kWh lithium-ion battery can be charged via either a conventional domestic socket or a wall-mounted charge box. It’ll take 3h 45m to hit fully charged from empty with the former, falling to 2h 15m in the latter. There’s also an in-built e-manager, which allows the driver to preset the vehicle’s charging time, as well as the car’s interior cooling or heating – these can be controlled via the My Volkswagen app.

You can plug it into your standard domestic mains supply at home (the socket is just behind the VW roundel in the radiator grille) and it’ll take about three and a half hours for a full charge, or, if you have an exterior wall box unit installed, a full charge will take around an hour less. The car will also charge the battery while on the move.

With the battery fully charged the GTE will give you around 25 miles on just the electric motor. This is more than enough for most people’s urban commutes and for longer journeys you have the petrol engine as well. 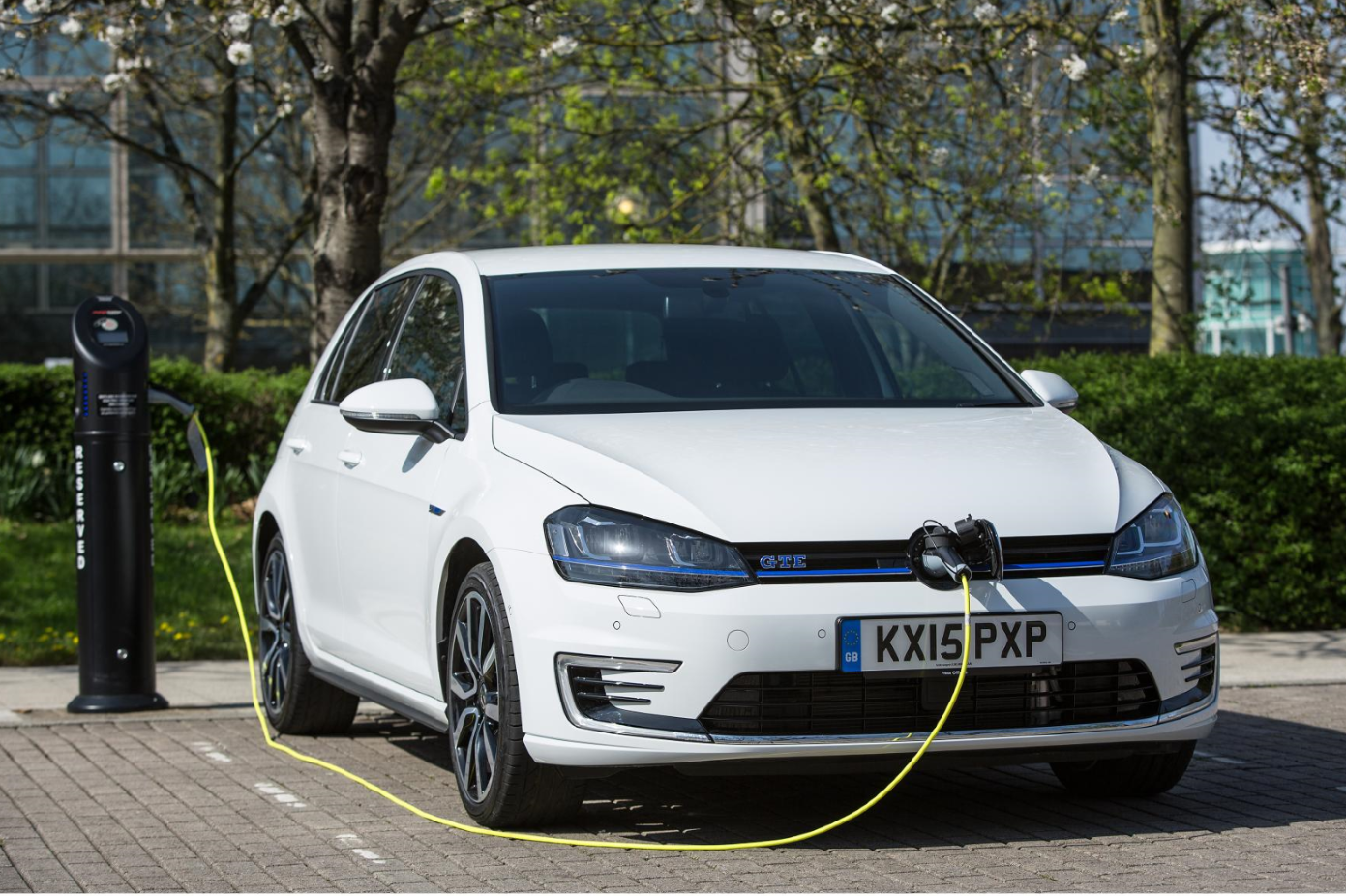 You do need to take some the claimed fuel consumption figures with caution; I reckon that averaged out over different journey lengths and conditions you’re looking at high 50s to high 60s; what you can count on is the CO2 figure of less than 40 g/km.

That figure will come in very handy as road taxes go up, for company car drivers where it clearly beats a diesel alternative and also when or if more emissions-based city centre charges are introduced.

The appeal and indeed the whole point of any plug-in hybrid with both a petrol and electric motor is that you are largely shielded from future taxes, and with its either/or engine option the GTE eliminates the range anxiety you can get with a pure electric car and makes it much more practical.

Anything with a GT badge in the Volkswagen range tends to inspire thoughts of a sporty, involving drive. This is also true of the GTE with its well-weighted steering and eager turn-in, even with that added weight of the lithium-ion battery.

You may have noticed that the GTE moniker is one letter away from GTI and when both power units are engaged under heavy acceleration the hybrid car is very nearly as quick as the sports version.

With so much torque its low and mid-speed performance is very impressive, but on the flip side, the extra weight of the batteries does make it less than pin sharp in a bend.

The instruments are all familiar save that a `power gauge’ is built into the rev counter to show you how much battery you are using, and the infotainment touchscreen in the middle of the console will also display real time details on how the hybrid is working and the range left.

The GTE is capable of reaching up to 81mph in all-electric mode, which means that all manner of journeys can be undertaken without troubling the petrol engine. That said, should you want a combination of both powertrains then the GTE button can be pressed, and this gives the best overall performance. 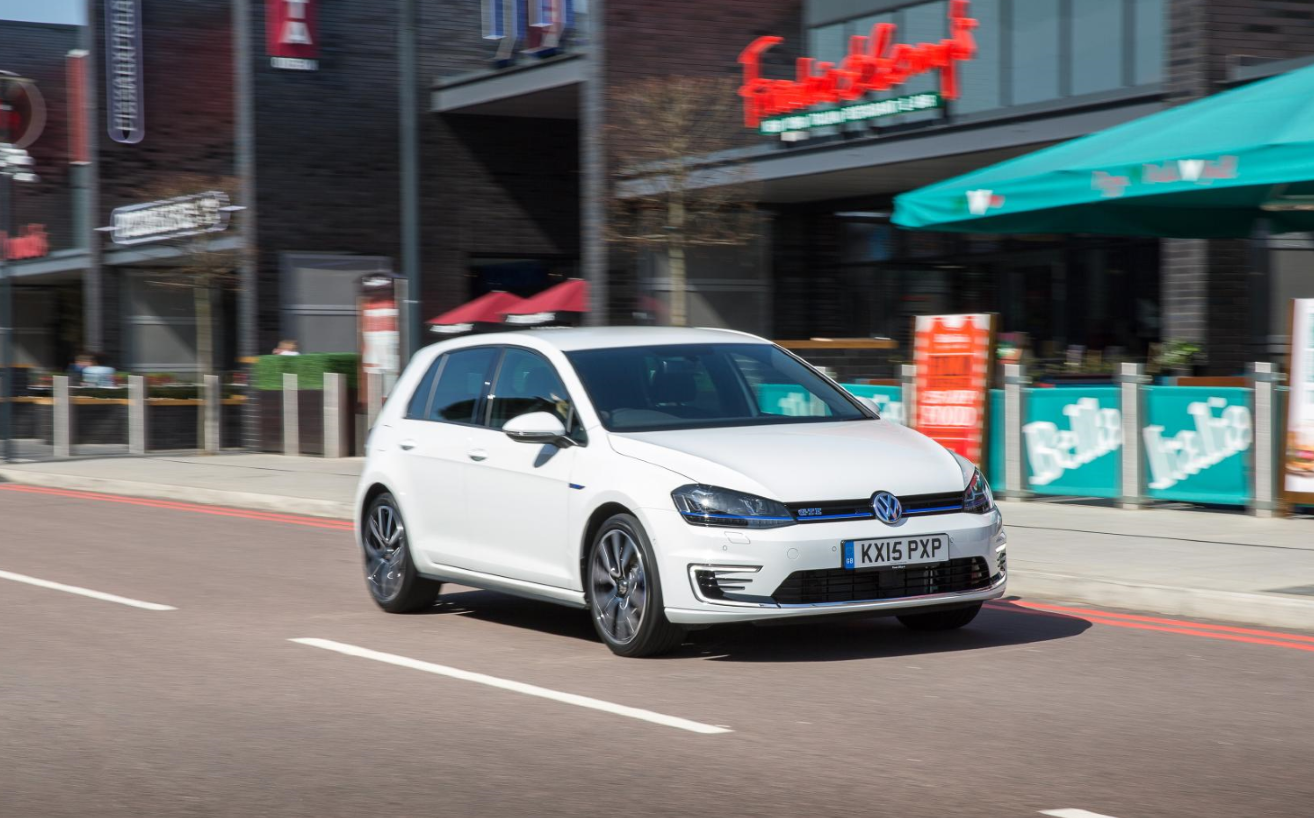 It’s a two pedal car with a DSG semi-automatic gearbox and you can select from various modes, from full bore performance through to e-mode which takes as little energy as possible.

Up to 31 mph the electric motor is absolutely smooth and if you so wish it can carry on up to 80 mph on battery power – albeit not for very long! –in normal driving the car switches to petrol at 30 mph and the change is automatic and hardly detectable.

The GTE’s interior exhibits all of the trademarks you’d expect to find in the GTI – the tartan sports seats take pride of place inside (though use blue rather than the traditional red), as well as a flat- bottomed steering wheel. Everything feels well screwed together, and everything you touch is made to a high quality. The switchgear, for instance, operates with plenty of solidity while the buttons on the multifunction steering wheel are rugged enough for many years of use to come.

Practicality levels are good, with plenty of headroom for those sat in the back and equally as much for those in the front, so the argument for shotgun won't be as intense as it used to be. 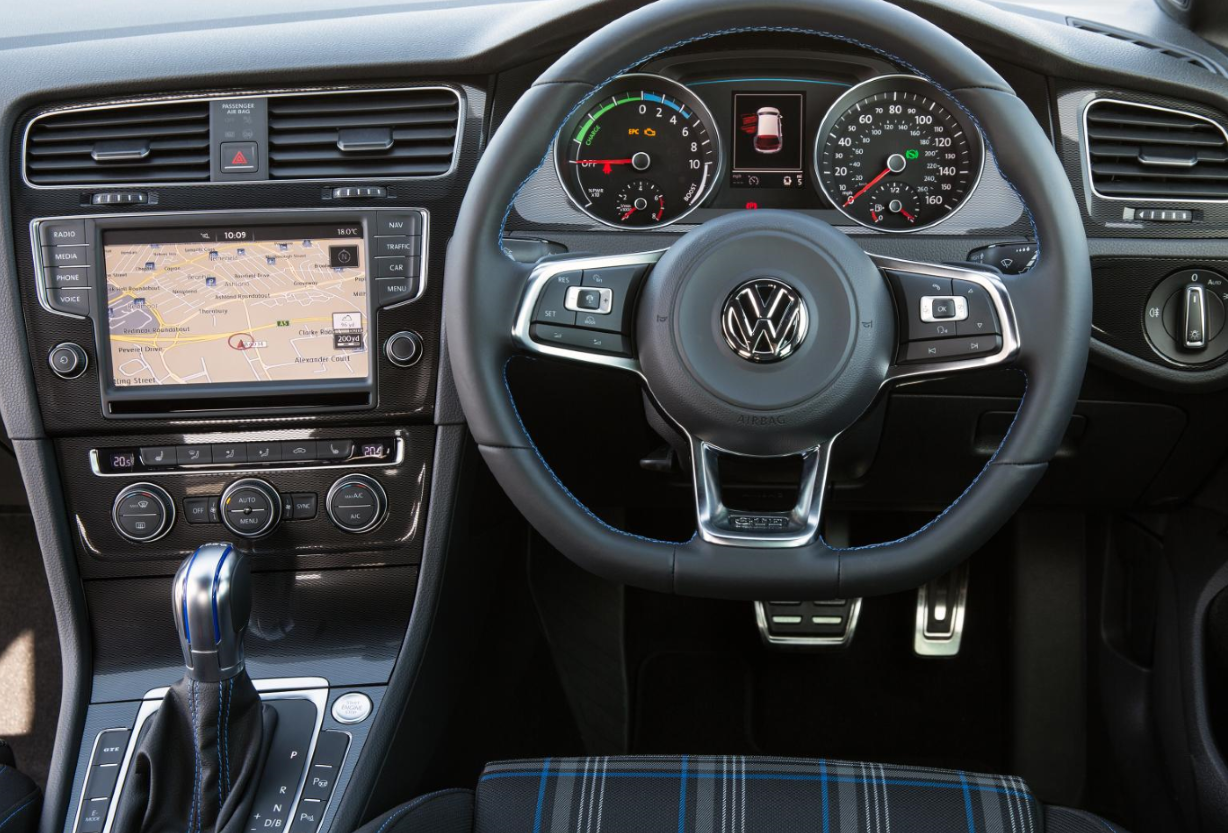 Interior wise, it looks and feels typically VW which is to say solid and as if it will last a lifetime without anything coming loose. There is a little bit less space which is taken up by the battery pack under the boot floor but otherwise it is an upmarket Golf.

VW promotes its eco-focused cars with a blue colour and you will find this theme on the trim highlights.

As one of the more ‘premium’ specifications in the Golf range, the GTE comes with a decent amount of standard equipment. The Advance-spec car comes with Volkswagen’s latest Discover Navigation infotainment system, heated front seats and 18-inch wheels. The satellite navigation is also in-built with the ability to identify potential destinations within the car’s all-electric range, as well as charging points nearby. In addition, you get DAB radio included as well as Bluetooth connectivity.

Should you buy one?

There is no doubt that the market is turning towards hybrid cars and the arguments in their favour are only getting stronger. Internal combustion engines are going to be legislated out of existence within a generation or so and hybrids and electrics will take their place.

For the moment a plug-in hybrid makes by far the more sensible and practical choice. Until electric recharging points become many more times more numerous than they are today the appeal of battery-only cars is always going to be limited.

Hybrids make much more sense. The Golf GTE gives you the tax benefits of an ultra-low emission car, the cost advantages of running on batteries you can recharge at home, but also the 450 mile or so range of a traditional car. 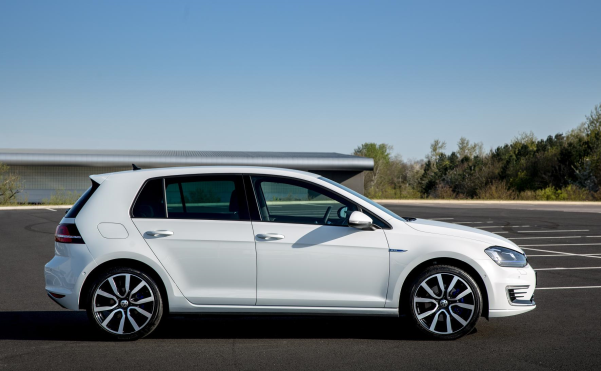 There are understandable concerns over the battery life and warranty but on top of the standard three year cover on any VW, there is an eight year/99,000 warranty on the battery pack.

There is a cost premium with a hybrid over a diesel or petrol but with the market moving as it is, a car like this is going to hold its value a lot better than the other two. If you are in the market for a second-hand hybrid then the VW is one of the very best all-rounders.

The GTE was updated after two years in 2017 when it got a turbocharged petrol engine as well as a mild facelift.

The Volkswagen Golf GTE is an excellent marker in terms of where we are with shifting the hot hatch spirit into the electric market. It’s very economical, offers a decent enough electric range and is thoroughly well built. If you’re looking to keep running costs low while doing so in a smart, well-styled and practical hatchback then the GTE could be for you.

Second hand GTEs start to hit the market from around £17,000 unless you want one with leggy mileage. With a budget of £20,000 you will start to see cars with under 20,000 miles and a service history. The most expensive models are around £25,000.

Press the GTE button: A more responsible use of power:

Facts at a glance