Fantastic Cars And Where To Find Them

JK Rowling’s, Fantastic Beasts And Where To Find Them, tells how, long before Harry Potter embarks upon his educational career at Hogwarts, another young man takes on the wrath of the Ministry of Magic.

In the film, he accidentally unleashes a menagerie of weird and wonderful beasts on a non-magic practising New York. Tasked with recovering these enchanted critters, writer Newt Scamander must enlist the help of the secret society of witches and wizards, and one or two No-Majs (American Muggles) to track them down.

While these fantastical animals are not strictly speaking illegal in the real world, they’ll certainly turn a few heads and leave the sorcering community in an awkward spot, if the truth (and the creatures) get out.

Of course at Swansway Group we’re more concerned with beasts of the motoring kind, rather than those of the magical variety. While we’re waiting for the release of the new Potter-esque film we’ve spotted some amazing automotive alterations that have been let loose around the globe.

Some are road-legal, some are not but who cares? Let’s have some fun... 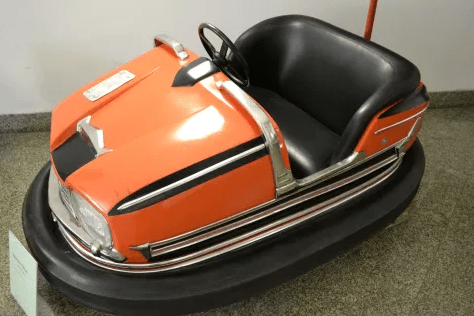 Where To Find It: Glasgow, UK

When Tom Evans decided to restore a converted dodgem car back to its roadworthy condition, the fact that he used to run a fairground wasn’t much help. It already had three wheels and an engine from a Reliant Robin Rialto but he had to ‘gear’ himself up for repairing lights and indicators as well as installing a brake.

After months of searching for the right parts, the tiny car was completed and is regularly spotted out and about on the streets of Glasgow. Capable of a top speed of 75mph, Tom rarely exceeds 45 mph, however, treating his granddaughter with regular trips to the local fast food outlet and using the car to help raise money for a local children’s charity.

Despite its name, this snazzy little bumper car hasn’t had any bumps yet. 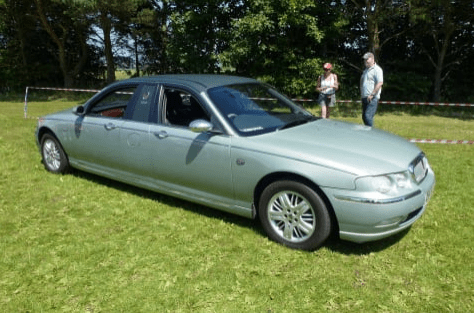 Fantastic Features: Two of everything, except wheels...there’s still 4 of those!

Where To Find It: Dyfed, Wales

At first glance, you might wonder what’s so special about his car...but look again and you’ll be forgiven for thinking that your eyes are playing tricks. Front and back, this car looks exactly the same. A two-headed beast if ever there was one!

At 2 feet longer than the original Rover 75, the imaginatively named Rover 150 requires an extended exhaust, fuel pipe and brake cable. Its unusual appearance has prompted police to stop the car more often than a usual vehicle, more out of curiosity than anything else.

Owner, Gerry Lloyd, who built the car in 9 weeks following a bet with one of his friends, loves seeing people’s reactions as they try to figure out whether his car is coming or going! 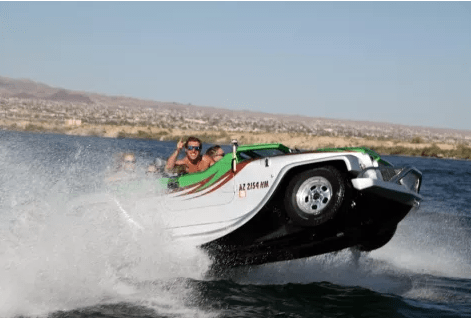 Where To Find It: California, USA

Equally happy on land or water, the WaterCar Panther is more of a mechanical frog than a car. Although, at a cost of £100,000, it won’t take too many kisses to turn it into a prince, especially since the Royal Family of Dubai reportedly own several.

A V6 3.7 litre engine allows the vehicle to move seamlessly from land to water and back again. Each car is custom-built with the buyer encouraged to choose colours, fabrics and graphics, no doubt to co-ordinate with their private jet! 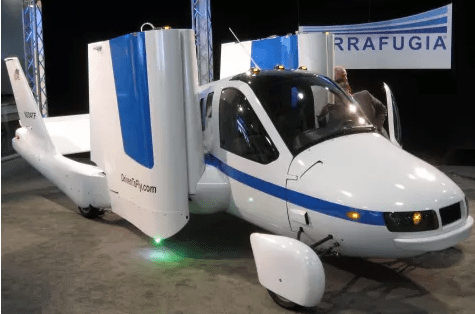 Where To Find It: Boston, USA

Ever struggled to find a parking space at the airport? Here’s the solution: the Terrafugia Transition. Drive to the airport, press a button to unfold the wings, and fly up and away. No parking required.

The conversion from car to flying machine takes less than a minute and with the FAA having recently given the project from Terrafugia its blessing, this ‘roadable aircraft’ could be taking to the skies in 2018.

No need to hire a hangar as this little number easily fits into a standard garage and runs on ordinary unleaded petrol. 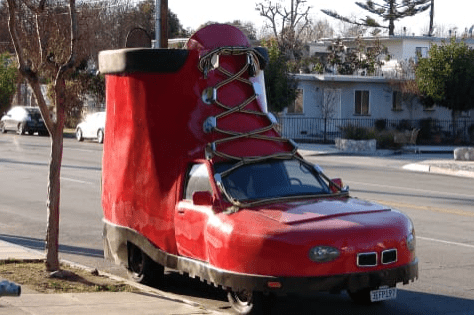 Where To Find It: Los Angeles, USA

Used to advertise Victor’s Shoe Repairs in Burbank California, this weird vehicle has been causing passers-by to make a double take for at least the last 20 years. Somewhere under all that mock shoe leather is a Toyota 4Runner SUV.

Aside from his strange taste in vehicles, Victor is also apparently a very excellent shoe repairer, with rave reviews all over the internet. Although we aren’t sure of the exact speed, the shoe car still regularly runs as part of Victor’s delivery service - definitely a ‘shoo-in’ for the World’s most unusual vehicle. 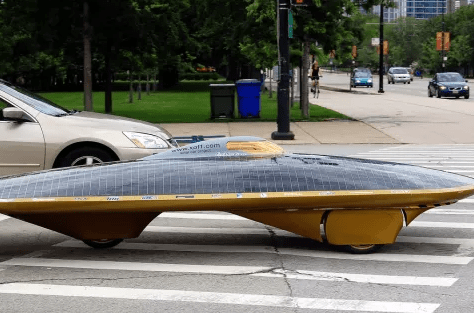 Where To Find It: Ontario, Canada

Built by Marcelo da Luz in an attempt to motivate people to do what they can to help preserve the planet, you’d be forgiven for thinking aliens have landed on spotting this vehicle! The solar-powered Xof1 has travelled the length of Canada and the USA to raise awareness of greener technology.

Having completed an ice run and two trips to the Arctic Circle, da Luz then proceeded to pull the UFO-shaped car across half of Canada. What next? Space, man! 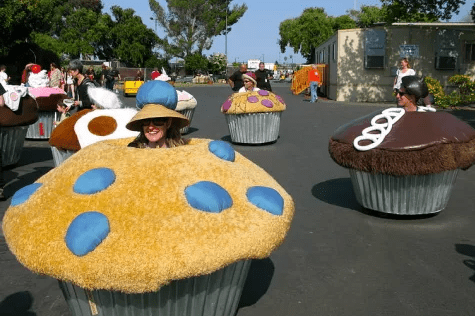 Where To Find It: San Francisco, USA

Originally designed by artist Lisa Pongrace to take part in the 2004 Burning Man Festival, these cupcake cars are sure to stop the traffic, if only due to their painfully slow 24-volt electric motors.

If your sweet tooth can’t resist these baked delights, order yours from Neiman Marcus catalogue at the bargain price of $25,000 each...hat not included. 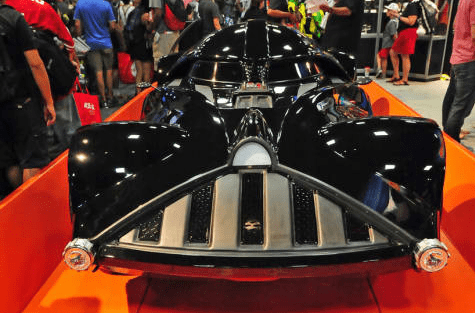 Where To Find It: California, USA

Hot Wheels created this full-size Darth Car in conjunction with action vehicle engineer, Billy Hammon to help promote a limited edition toy version. Based on a C5 Corvette and powered by a V8 engine, this subtle, helmet-styled, rear-wheel drive motor really does go.

It was built in just 7 weeks and has an access hatch that opens just like the Dark Lord’s helmet, complete with dry ice effect. With top speed of 150 mph and Darth Vader’s signature heavy breathing sounds, the Force is certainly strong in this one. 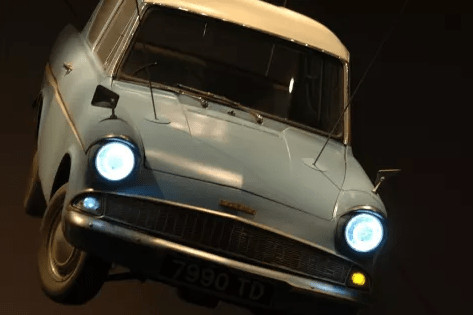 Where To Find It: Somewhere in the sky between The Burrow and Hogwarts or crashed into the Whomping Willow

What better way to avoid the traffic than by flying instead of driving? J K Rowling favourite Harry Potter had this cracked when he and his friends took to the sky in an enchanted old Ford Anglia. The car turned out to be a sensitive soul, later spitting out Harry and Ron for their terrible parking - right in the middle of the Whomping Willow.

If you have something a bit more drivable on your mind for your next fantastic car, pop into your local car dealership to take a look at what’s available. We promise you’ll find no gremlins in the gears or boggarts under the bonnet, just friendly, honest motoring advice.