The XF Sportbrake is now even more spacious inside and its new design delivers a coupé style profile with a powerful sense of dynamism. The meticulous craftsmanship of every Jaguar is combined with contemporary materials and can be complemented with sleek veneers and quality cloths in a choice of colours. An optional 1.6m fixed panoramic roof will make the XF Sportbrake feel even more light and airy in the interior.

The Sportbrake makes no compromise between aspirational style and enviable practicality. Of course it shares the technical advancements of all the Jaguar models with a range of driver assistance technologies available that keep you and those around you safe and secure, so you can relax and enjoy every journey. State of the art in-car infotainment system enables you to stay entertained and connected whilst on the move, with features that can be tailored to meet your specific requirements. And as those clever people at Jaguar like to think of everything, there are a myriad of innovative details, that make this vehicle superbly "fit for purpose" and the idea accompaniment to the modern busy lifestyle. The latest Jaguar XF Sportbrake comes with plenty of space in the front and back which will easily fit all occupants. The boot comes with 565 litres but when you fold the seats down this increases to 1,700 liters allowing you to take longer or more luggage/cargo.

When the rear seats are folded there is multiple points to attach and tie down your cargo/luggage to keep thing safe and in place while you are transporting them.

One driver assist system includes the all-surface progress control which can take over the acceleration and braking while you are travelling along slippery surfaces. Another beneficial optional system is the head-up display this will give you information on your speed and navigation keeping your eyes on the road and reducing your distractions.

One safety feature includes autonomous emergency braking which can detect when a collision is imminent and will brake to avoid or reduce the severity of the collision. The Jaguar XF Sportbrake comes with many driver assist systems to keep the driver, passengers and pedestrians safe. 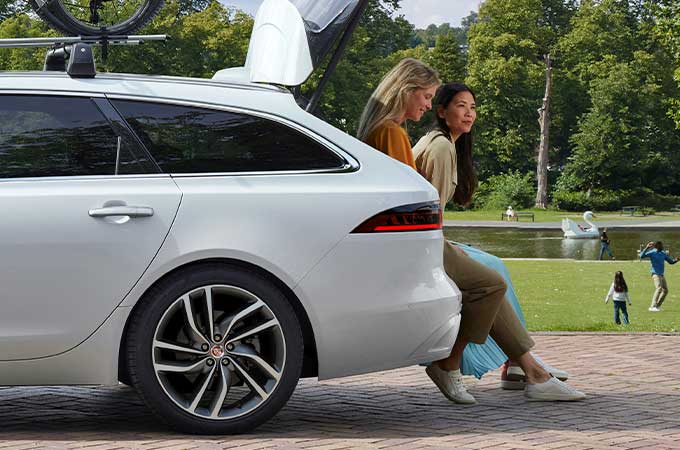 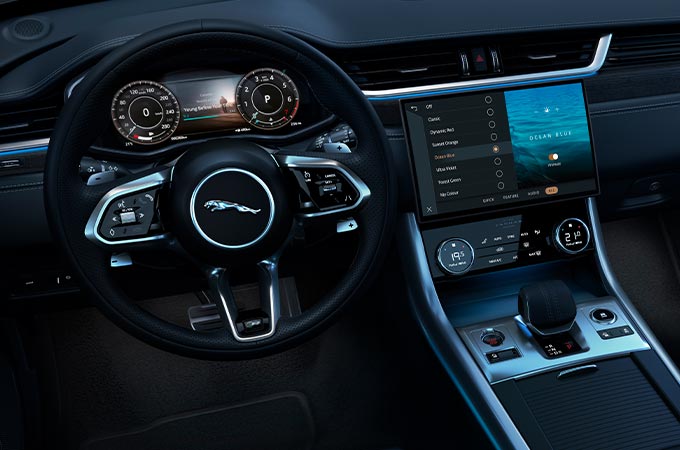 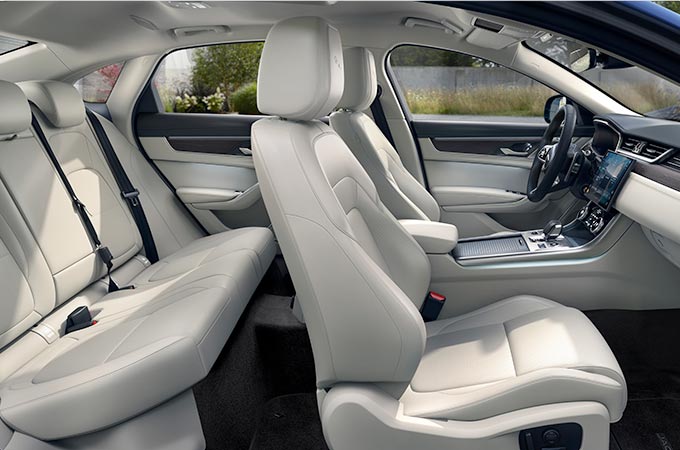 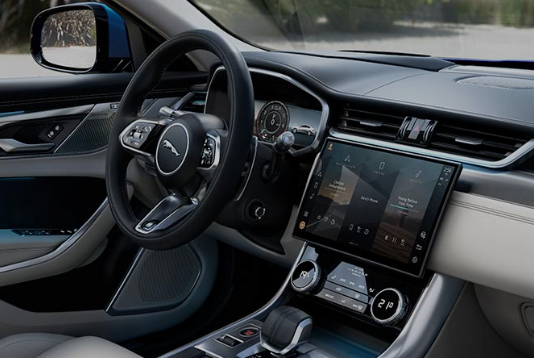 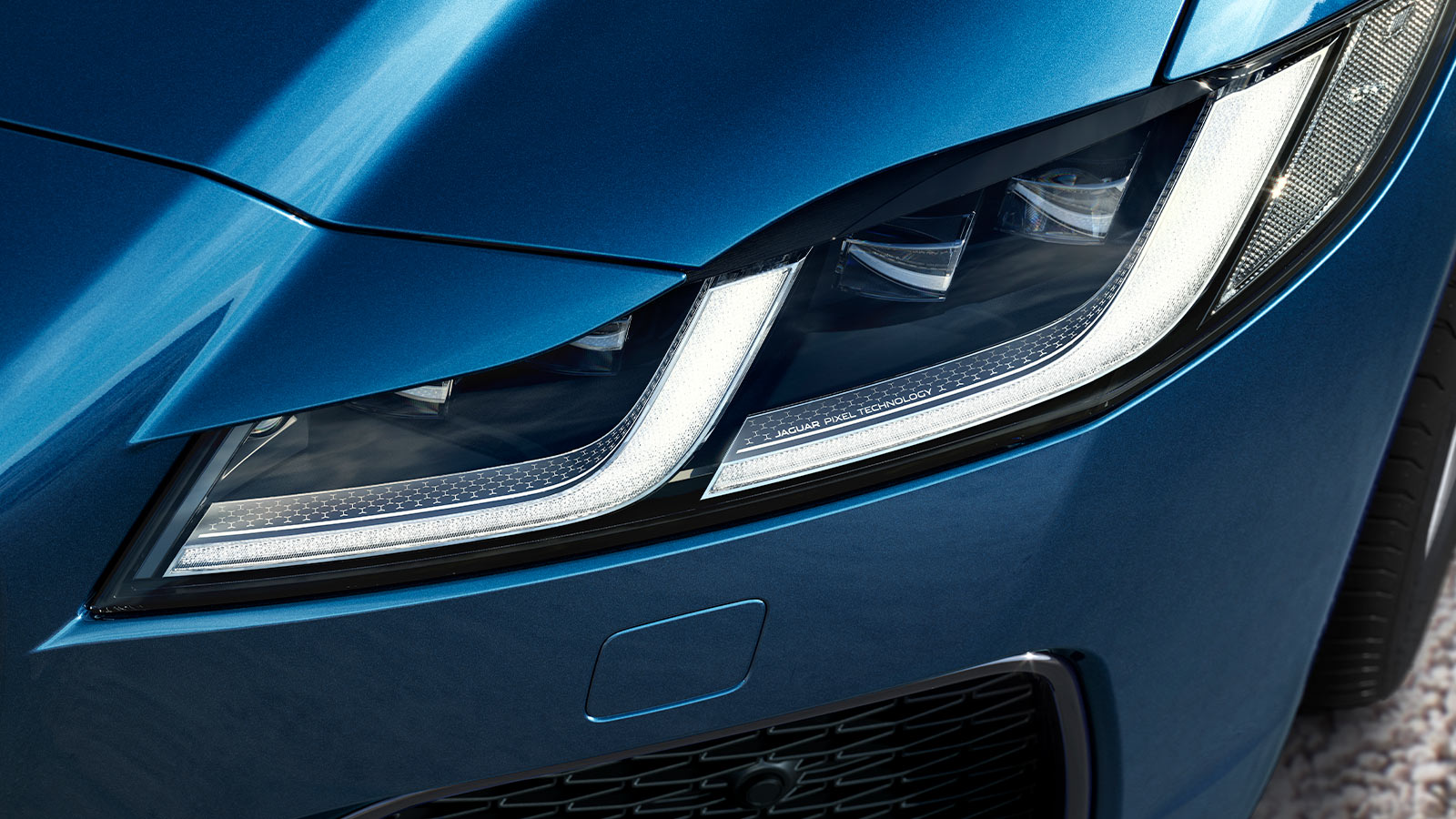 What trim levels are on the Jaguar XF Sportbrake?

The XF's Sportbrake's new advanced aerodynamics make for a more efficient and stable ride at any speed. With a drag coefficient as low as Cd 0.26, the XF Sportbrake cuts through the air reducing fuel consumption and lowering emissions.

The lightweight aluminium architecture means that once on the move, the front double wishbone and rear Integral Link suspension systems deliver outstanding levels of ride comfort and handling, giving you pure confidence and exhilaration behind the wheel.

An integrated spoiler, LED tail lights and Jaguar signature 'J' blade daytime running lights give the XF Sportbrake exudes an on-road confidence that is hard to match. This is not a Jaguar that shouts its arrival – it doesn’t have to. It's sophisticated presence commands attention and the sleek elegant styling only hits at the muscular power underneath the bonnet. A flash of Yellow on the brake calipers, Dark Satin Grey fender vents and 300 Sport badges. XF 300 SPORT is ready to roar.

All the practicality you could wish for, but no compromising on fun. The Sportbrake is a car for those that love to drive, Should I buy a Jaguar XF Sportbrake?

Looking for a practical, yet beautiful car? Then an estate car could be for you. Should you be considering the Jaguar XF Sportbrake?

What is the Jaguar XF Sportbrake?

Sportbrake is Jaguar speak for an estate car – so the XF Sportbrake is the eagerly anticipated estate version of the handsome XF saloon. Sat in a competitive class of premium estates which includes the BMW 5 Series Touring, Mercedes E-Class Estate and Audi A6 Avant, Jaguar also has pressure from below with cars such as the Volkswagen Passat Estate nipping at the low-end of the model line-up.We headed to Portugal to see if the British-built Sportbrake has what it takes to stick it to its mainly German competition.

Clearly, the biggest difference is the extra metal above the rear axle to turn this from XF Saloon into XF Sportbrake. Other than that, there aren’t many changes externally.The Sportbrake is only 1mm longer than the saloon it’s based on, but the higher roofline makes for a more practical interior – rear passengers will certainly appreciate the extra headroom. Jaguar’s also fettled around underneath the car, fitting air suspension at the rear to keep it level no matter how much you load in the boot. The XF Sportbrake also comes with Jaguar’s latest InControl Pro touchscreen infotainment system as standard.

What’s under the bonnet of the Jaguar XF Sportbrake?

Our 236bhp unit had plenty of performance for most drivers, and once you settle down to a cruise, it’s pleasantly refined. It’s mated exclusively to all-wheel drive in the UK, which brings fuel economy down to 48.7mpg.

If you can afford it we’d recommend stretching to the more powerful, 296bhp 3.0-litre V6 diesel. This range-topping oil-burner is smoother than the four-cylinder engines – especially at higher revs – and has bags of low-end torque. Despite the larger capacity, it’s actually more economical than the 2.0-litre diesel, at 49.6mpg combined, and the real-world gap would likely be even bigger given the need to push the smaller units that much harder.

If you want petrol, you only have one choice in the UK – a 2.0-litre four-cylinder with 246bhp. Performance is good, but it needs to be worked far harder than the diesels. That harms refinement, and also means you’re unlikely to achieve the 41.5mpg claimed fuel economy figure. Jaguar won’t bring the 3.0-litre V6 petrol engine into the UK market – there’s just no chance it will sell.

All engines bar the entry-level 2.0-litre are mated to a smooth-shifting eight-speed automatic gearbox as standard equipment, with that base unit sending power through a six-speed manual.

Jaguar knows how to build a tidy-handling car, and the XF Sportbrake is no exception. It comes very close to the perfect balance of ride and handling – remaining comfortable and composed at a cruise, but able to pick up its petticoats once you get onto a twisting B-road.

With sharp and direct steering, the XF Sportbrake is a joy to drive regardless of which engine you have fitted. Most impressive is the way it hides its weight – from behind the wheel, you can forget this car tips the scales at almost two tonnes.

Step from a Volvo V90 or Mercedes E-Class Estate and the XF Sportbrake will feel like a sports car in comparison. That’s not to say it can’t do comfort too – switch out from Sport mode, leave the gearbox in auto and the XF will waft along with the best of its rivals. The rear air springs help here, as do the excellent seats, which are very comfortable and supportive. How does the Jaguar XF Sportbrake look?

There’s no other way to put it – the Jaguar XF Sportbrake is a very handsome car. Near-perfect proportions and a shapely rather than ungainly rear end mean you won’t be remotely embarrassed about choosing the ‘practical’ option in the XF range. Unlike the first car, this generation of XF had an estate variant planned from the beginning, and the cohesive exterior design really shows this.The front end remains unchanged from the saloon, which again is no bad thing. A bold, upright grille is flanked by slim headlights with a distinctive running light pattern. We just wish Jaguar would hide its sensor array better.

You sit quite low in the cockpit, with the high window-line making for a cocooned feeling. The centre console is all sensibly laid out, and some may prefer the Jag’s straight-laced design to the Mercedes E-Class or Volvo V90’s high-tech and button-light approach. However, short of the rising rotary gear selector and swivelling air vents, the interior lacks any real theatre.While Jaguar’s latest InControl Pro infotainment is a vast improvement on the old system, it feels a little dated, as the interface isn’t the most intuitive. The screen itself is clear and responsive though, as are the LCD dials. It’s in the back where the Sportbrake plays its trump card over the saloon. Even with a panoramic glass roof fitted, headroom is vastly improved, and six-footers can sit in comfort.The boot’s 565-litre capacity with the seats up (1,700 litres with them folded) is about average for the class, but the load area is usefully square and totally flat.

What’s the spec like on the Jaguar XF Sportbrake?

There are four trim levels to choose from – Prestige, Portfolio, R-Sport and S. All cars come with sat-nav, leather upholstery and rear parking sensors. Prestige cars come on fairly weedy 17-inch alloy wheels. You can step up in two directions – luxury or sporty. Luxurious Portfolio adds wood trim to the interior, an upgraded sound system, a rear camera and heated windscreen, while R-Sport adds stiffer suspension, body-hugging sports seats and a mean-looking R-Sport bodykit. S trim upgrades R-Sport with 19-inch wheels, as well as some other goodies. We’d recommend ticking the box for the active safety pack, which gives adaptive cruise control, lane-keeping assist and blind sport monitors. The XF Sportbrake’s £34,910 starting point puts cars equipped with the 161bhp engine within reach of high-spec models from the class below, like the Volkswagen Passat. Our preferred 3.0-litre V6 diesel model does weigh in at £49,600, but that’s competitive with the class. The popular choice will likely be the 178bhp 2.0-litre diesel – that starts from £37,160.

Enthusiasts should quite rightly be drawn to the XF Sportbrake – it’s simply the best car to drive in its sector, which makes it a compelling package as well as a good-looking one; fuel economy isn’t quite up to rival’s standards (at least on paper), but more choice is never a bad thing, and Jaguar’s created a car that can – and should – tempt buyers away from the German competition.