The sports saloon redefined, enhanced by mild-hybrid technology and refined driver-focused interior. The Jaguar XE has been built with driver assistance features that help make getting around town and parking easier, and driving on motorways more enjoyable.

Pick from Jaguar’s range of petrol and diesel engines, with efficiency and performance designed in unison.The/ Diesel engine is enhanced with mild hybrid technology (MHEV) to provide even greater efficiencies and refinement through a smart regenerative system.

Built around you, the refreshed cockpit-style cabin envelopes you in luxury the moment you sit inside. A raised centre console and leather 12-way heated electric front sport seats will make you feel at home. With split-folding seats as standard and plenty of boot space, you'll never struggle for a place to store things in the XE. Plus, if your hands are full, there’s the optional powered gesture tailgate, to allow you to open the boot with ease. 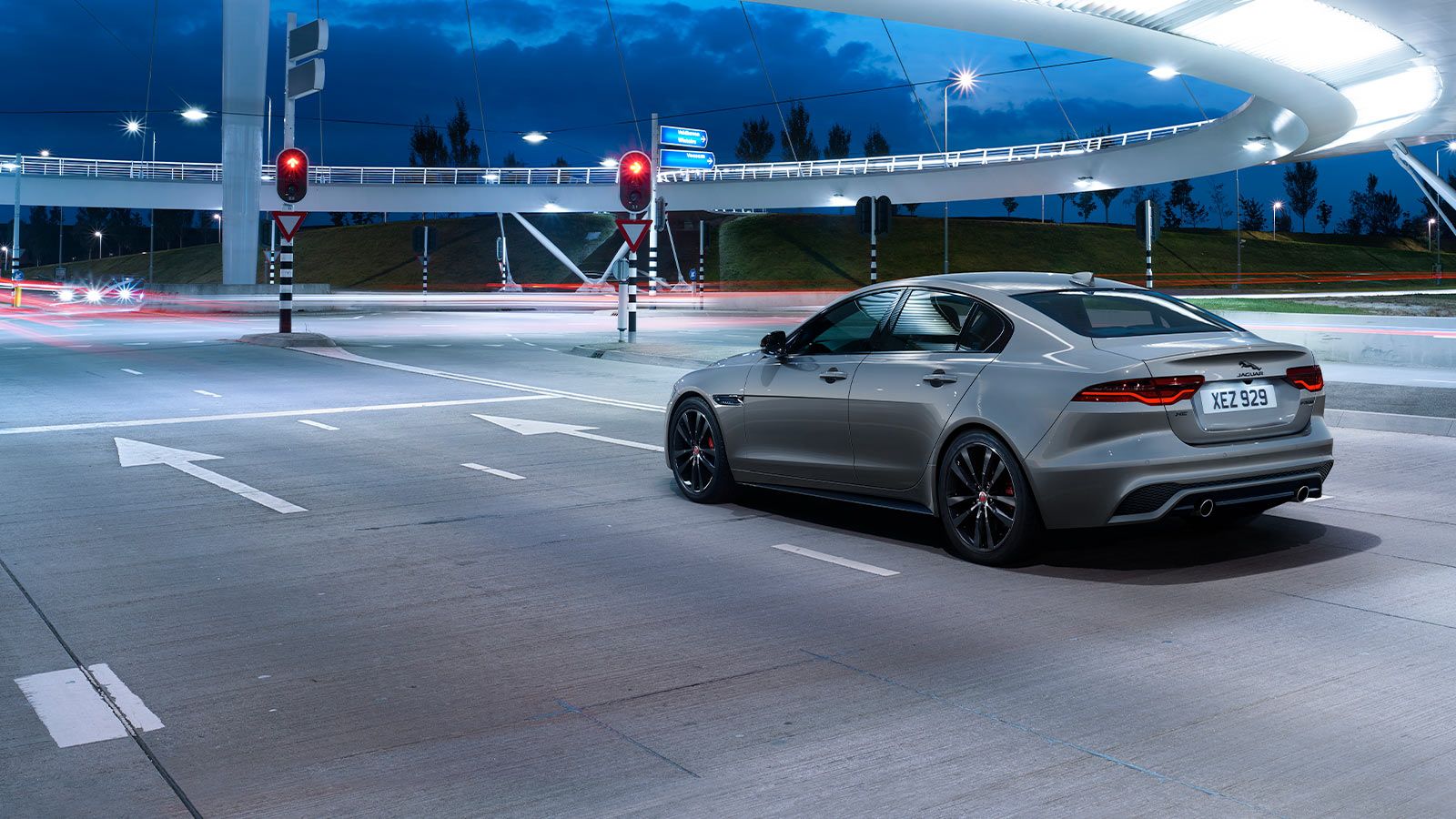 Optional cabin air ionisation, NanoeTM ionisation, removes harmful pathogens, allergens and unpleasant odours, neutralising the air contaminants and enhancing the wellbeing of you and your passengers.The introduction of the Pivi Pro connected infotainment and navigation comes as standard for the 21MY model of the Jaguar XE. The 10" Touchscreen, Apple CarPlay and Android Auto, enabling you to indulge in the latest in-car artificial intelligence for a fully connected journey.

Plus, optional upgrades enable you to make the most of Jaguar’s latest technological upgrades for the XE, including wireless device charging lets you charge compatible smartphones without the need for wires or a charging dock.

The optional Head-up Display projects key information onto the windscreen, whilst the option of MeridianTM or MeridianTM Surround sound systems immerse you into a musical experience whilst on the road. Whilst the optional Clearsight Interior Rear View Mirror provides an unobstructed view using a camera located in the antenna, ensuring constant visibility.Choose 'Wi-Fi Enabled with Data Plan' for your XE and you will be able to use your choice of media streaming services, with up to 20GB of data per month.

The Jaguar XE gives you loads of space and practicality, there is plenty of space for all occupants in the vehicle making your experience within the Jaguar XE comfortable and relaxing.

The boot of the Jaguar XE has around 480 litres and with an optional extra you can get 3 rear seats which fold down increasing your overall space if you need to carry more or longer items.

One of the driver assist systems for the Jaguar XE is the advanced park assist, this makes parking in tight space so much easier with the vehicle controlling the parking for both parallel and bay parking all you have to do is control the brakes and accelerator.

Another system is lane departure warning, this safety system will alert the driver with both visual and feedback warnings if you are starting to move out of your lane. The Jaguar XE driver assist and safety systems are there to make your driving experience better but also keep the driver, passengers and pedestrians safe. 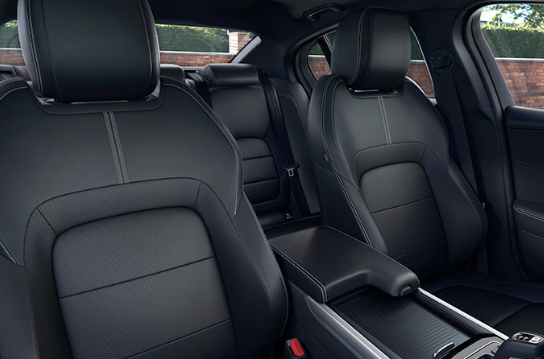 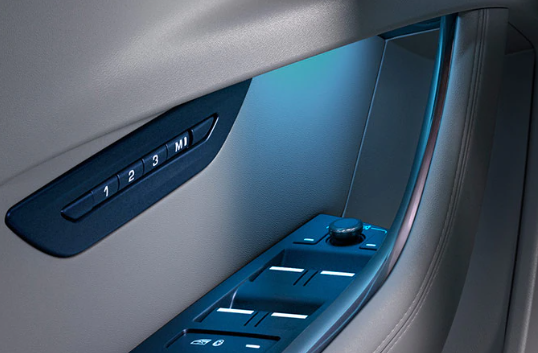 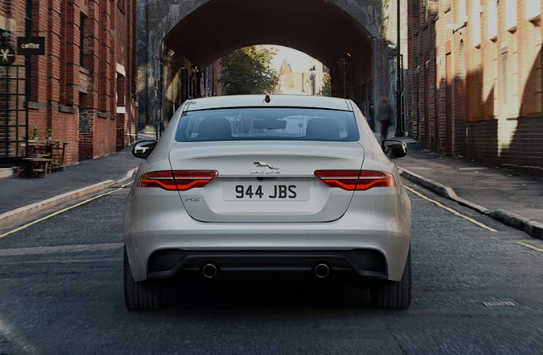 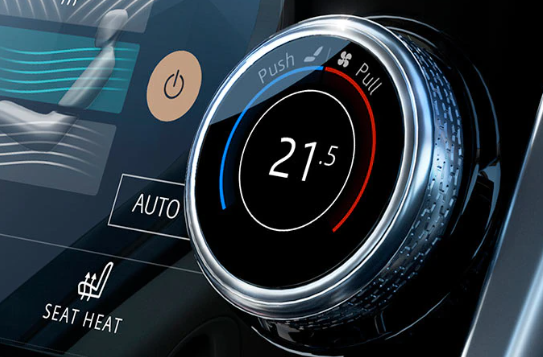 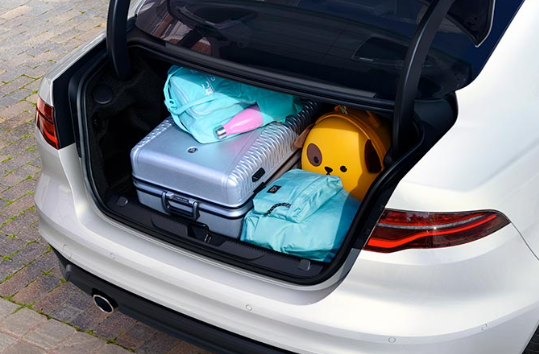 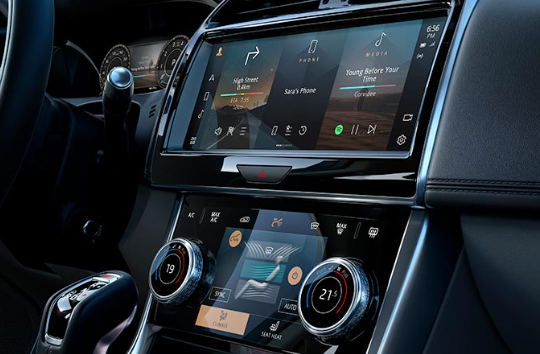 What trim levels are on the Jaguar XE?

The new Jaguar exterior is even more eye-catching, with a new muscular profile, wider grille and dynamic front bumper. The overall profile is wider, lower and more dominant. Choose from 11 exterior paints in solid, metallic and premium metallic finishes as well as a choice of alloy wheels, ranging from 17" to 19". Premium LED headlights, with signature DRL, automatically adjust the shape of the beam to help avoid dazzling oncoming vehicles, whilst the taillights take design cues from the F-Type.

Torque vectoring, by braking, maximises control of the vehicle by continuously monitoring and balancing the distribution of torque to improve both the grip and steering of the vehicle.​The system can reduce understeer by applying the brakes to the inside of the wheels, forcing greater torque to the outer wheels. Jaguar’s compact saloon – the XE – had a lot riding on it at launch.

Jaguar’s compact saloon – the XE – had a lot riding on it at launch. Buyers still had the sour taste of the X-Type in their mouths, but the new model proved to quell any concerns thanks to a seriously capable chassis and sleek looks. It did suffer in a few areas compared with the German competition, however. The interior wasn’t up to scratch and it couldn’t compete with the levels of tech offered by cars such as the BMW 3 Series or the Mercedes C-Class. The 2019 facelift aims to address some of these areas and brings with it a simplified engine line-up and trim structure to boot.

Styling changes are only really noticeable if you put the old and new XE side by side, but the old car was far from a minger, so that’s really no criticism. Where Jaguar has concentrated most of its effort is in the cabin, where you’ll find improved material quality, an updated design and far more sophisticated technology.The Touch Pro Duo touchscreen infotainment and control system makes its way over from the I-Pace, allowing the majority of the car’s functions to be controlled through a pair of high-res screens. Soft-touch plastics abound, and there are clever items such as the Clearview rear-view mirror available, too.

The engine line-up’s been toned down to just three units – two petrol and one diesel, all 2.0-litre four-cylinders. The range kicks off with a 247bhp petrol, while buyers after a bit more pep can opt for a 297bhp version. The two petrols are joined by a 178bhp diesel. All three engines are paired with the same eight-speed automatic gearbox (Jaguar has dropped the manual option) and can be selected with rear or four-wheel drive.

The XE was already a very good car to drive and this updated model is better yet. There’s a pleasingly natural feel to all the controls, with direct and beautifully weighted steering that inspires plenty of confidence in faster bends.

There’s tons of grip, and body roll is well controlled too. You might then expect a firm ride as a consequence, but the XE rides exceptionally well — even on optional 19-inch alloy wheels. Even large potholes don’t upset proceedings – although a greater level of adjustment to the standard-fit electric seats would be welcome to really nail the perfect driving position. The engine and gearbox are generally happy bedfellows, but there’s a bit of hesitation when pulling away at roundabouts, for example. They work well in ‘Dynamic’ mode, though, and the eight-speed unit is quick to respond to inputs either from the ‘pistol-grip’ gear selector or steering-column paddles.

The XE’s facelift was more about refinement than it was reinvention. A wider but slimmer grille is mirrored in slimmer headlights – possible only thanks to the adoption of LED tech across the range. Buyers can choose from a pair of front and rear ends, too – opting for the R-Dynamic pack sees the XE given a sporty grin. A new LED light signature also features at the rear, with a distinctive ‘chicane’ graphic that’s characteristic of new Jags.

Proportionally, it’s a handsome thing and looks fab on large alloy wheels. The classic silhouette – with a long bonnet and sloping roofline – may impinge on passenger room, but it does make for a great-looking saloon. 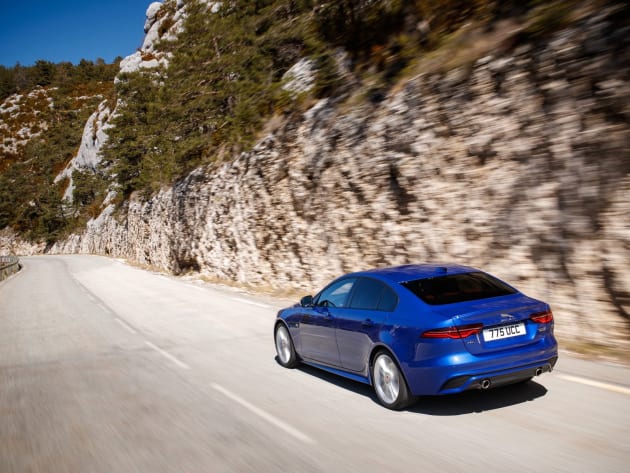 The interior has seen the biggest upgrade from this facelift and the changes are generally positive. The addition of Jaguar Land Rover’s Touch Pro Duo infotainment system (albeit optionally) really gives the centre console a sleek look, although an occasionally irritating user experience does somewhat spoil the surprise. Jaguar’s bold promise of ‘no hard plastics anywhere in the car’ broadly holds up, and most of the surfaces you regularly touch feel great. We’re particular fans of the slim steering wheel, which feels natural to hold and gives a better view of the simple digital instruments than do some rivals.

But even the best facelift would struggle to make the XE a practical people-mover, and space for passengers in the rear is still very poor. A 6ft passenger would struggle to sit behind a similarly sized driver and the boot is no more than adequate. Worse yet, the rear seats don’t fold to accommodate larger loads.

Buyers can choose a standard XE or a sportier-looking R-Dynamic model, which can be selected in S, SE, or HSE trim. Regardless of which one you opt for, full LED headlights, 18-inch alloy wheels, electric front seats, standard Touch Pro infotainment with navigation, smartphone connectivity via Apple CarPlay and Android Auto, cruise control and dual-zone climate control all come as standard.

SE adds a few goodies such as keyless entry and digital dials, while HSE goes the whole hog with a Meridian sound system and Windsor leather seats. However, headline kit is relegated to the options list. Wireless smartphone charging, the electronic ‘Clearsight’ rear-view mirror and that all-important Touch Pro Duo are part of a Technology Pack – almost £2,000 on some models. Keen drivers may also want to opt for the £1,240 Dynamic handling pack, which brings adaptive dampers and beefier brakes to the party.

This facelift seems mild but it does enough to transform the XE from an also-ran to a contender. The improved interior and fettled styling are both big pluses, and neither take away from this car’s brilliant dynamics. However, practical considerations such as interior room and fuel economy can’t and won’t be ignored, and with the XE falling short on both of these we don’t think the Germans will be losing as much sleep as Jaguar hopes.