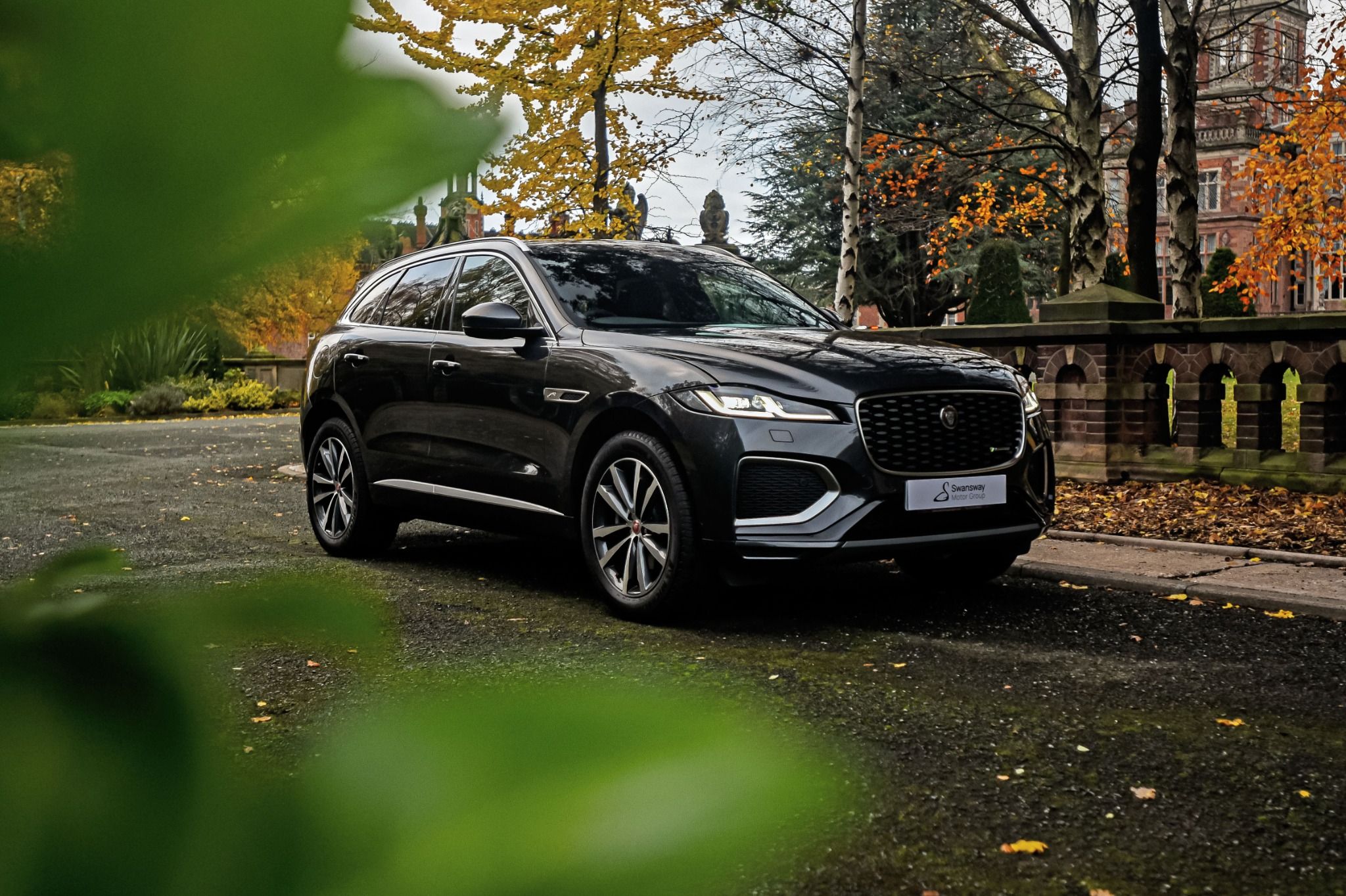 With a confident new exterior, stunningly crafted all-new interior, the latest generation Pivi Pro infotainment and the choice of in-line four and six-cylinder engines including PHEV** and MHEV technology, the new Jaguar F-PACE is more luxurious, connected and efficient.

The new F-PACE features Jaguar’s advanced Electronic Vehicle Architecture, EVA 2.0 and the latest Pivi Pro infotainment technology.For/ enhanced convenience, a wearable Activity Key can be used to lock, unlock and start the vehicle without the need for the conventional key fob to be present in the vehicle. 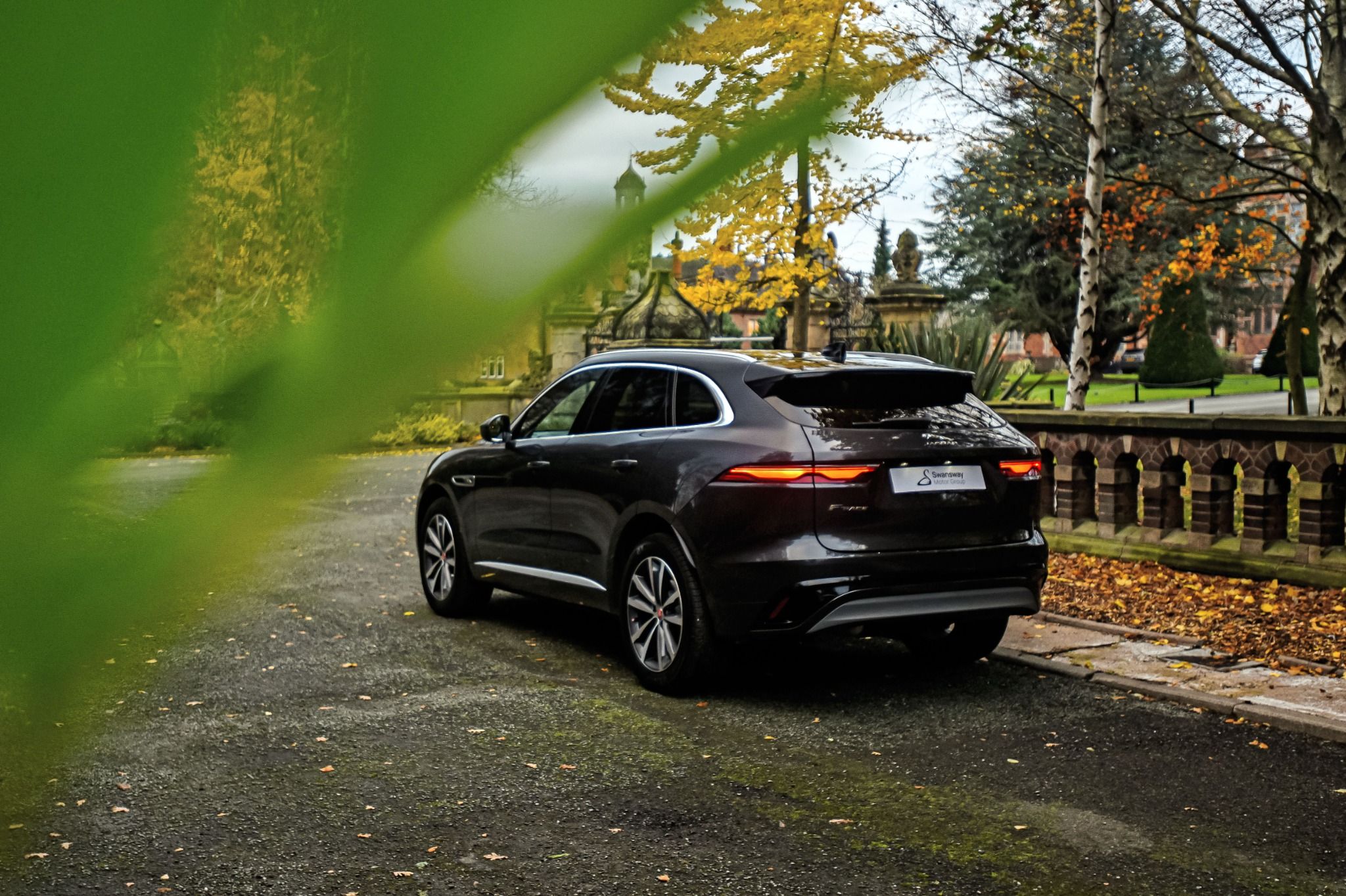 The new F-PACE is available with the P400e PHEV** powertrain as well as the latest four-cylinder and new in-line six-cylinder petrol and diesel Ingenium engines. Mild Hybrid Electric Vehicle (MHEV) technology is also available on selected engines, which can harvest energy usually lost when slowing and braking, before being redeployed to assist the engine when accelerating away.

When fully charged, the new P400e is capable of up to 33 miles of all-electric driving, enabling the new F-PACE PHEV to complete the average UK daily commute, of 18.8 miles*** to and from work, in EV mode without requiring a recharge.

The Jaguar F-Pace comes with a range of driver assist and safety systems to make your driving experience easier and more enjoyable but to also keep you, passengers and pedestrians. One systems includes autonomous emergency braking alerts the driver of a potential collision and if not action is taken the system will automatically brake for you. 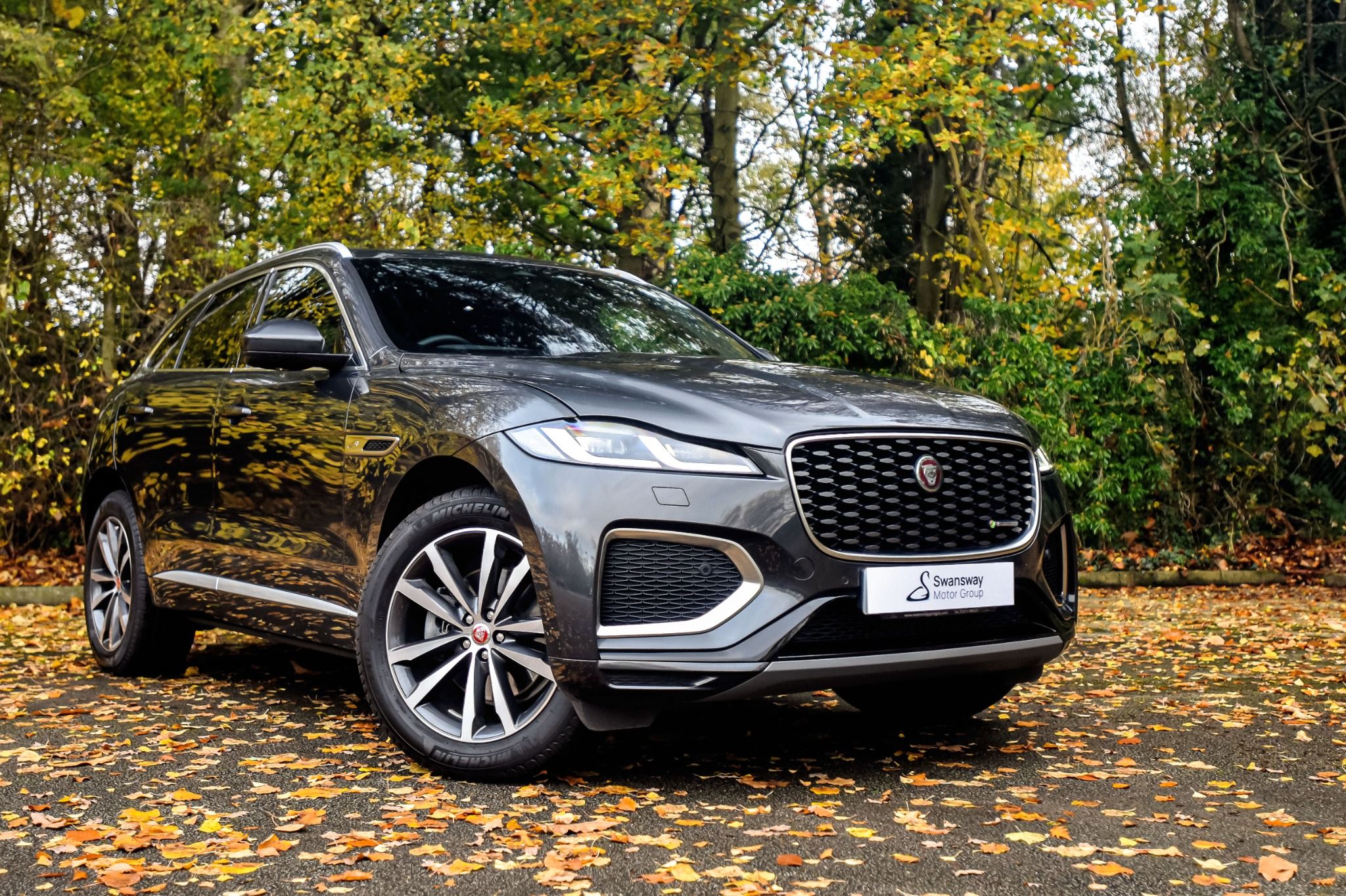 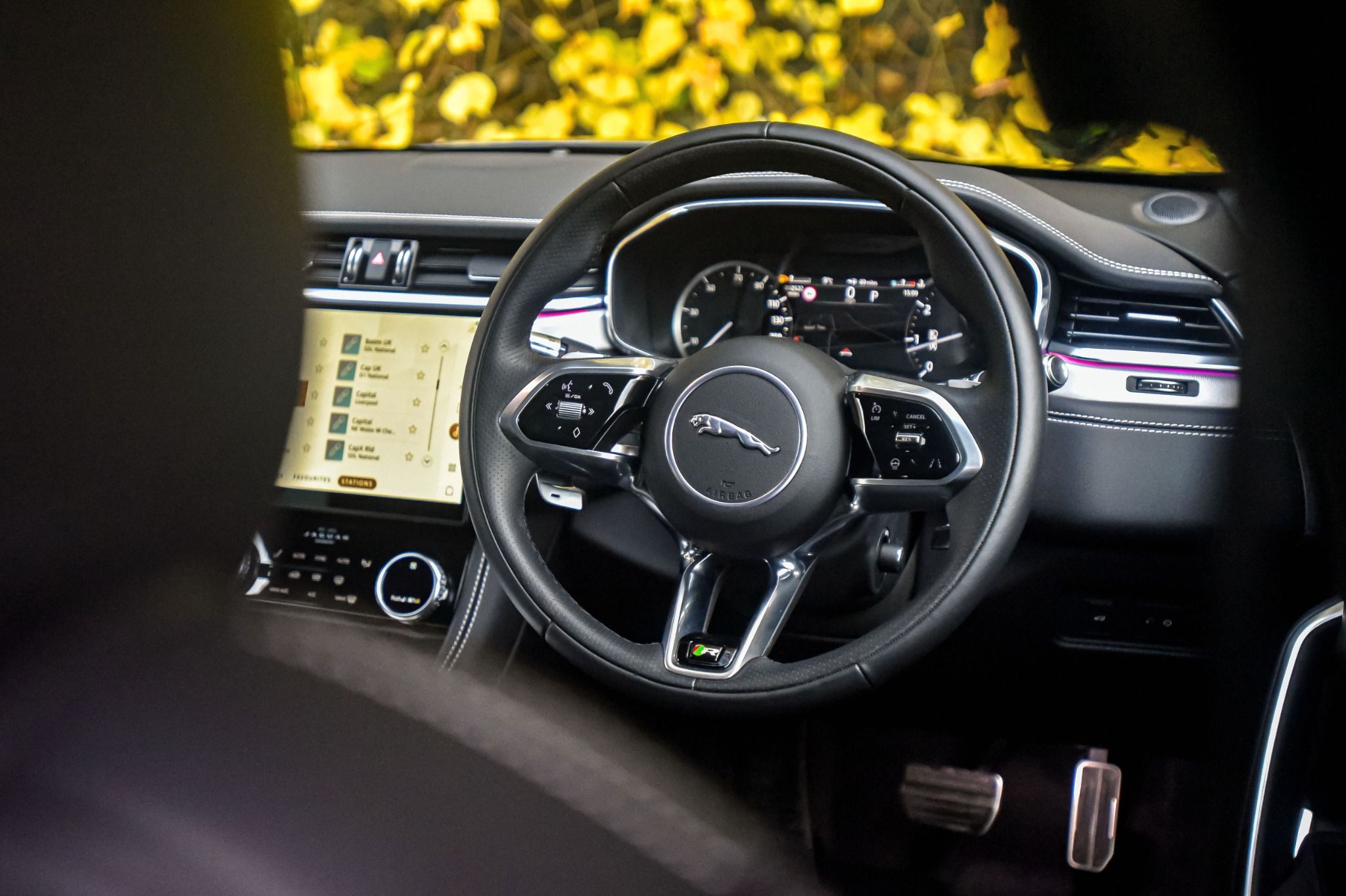 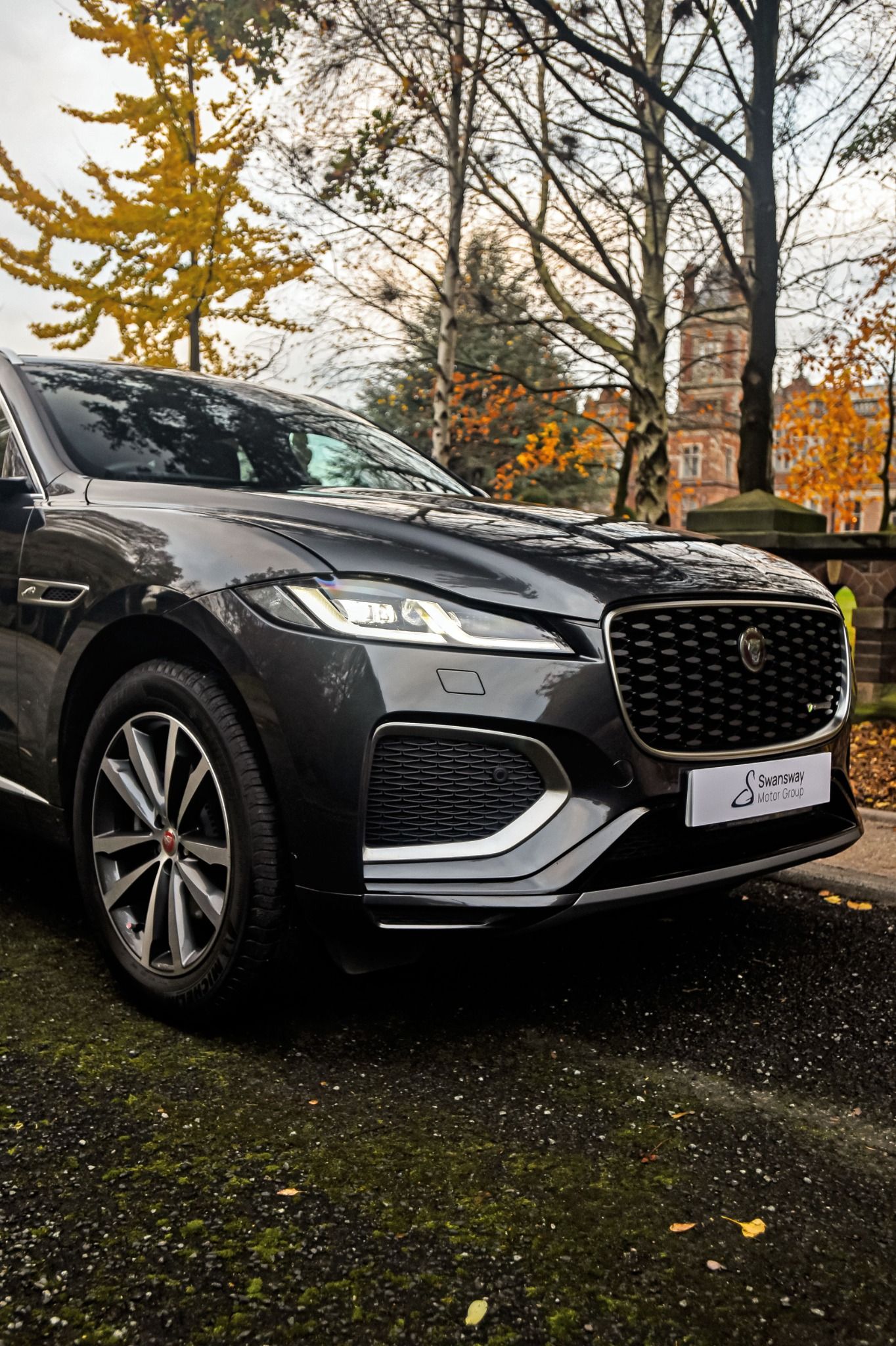 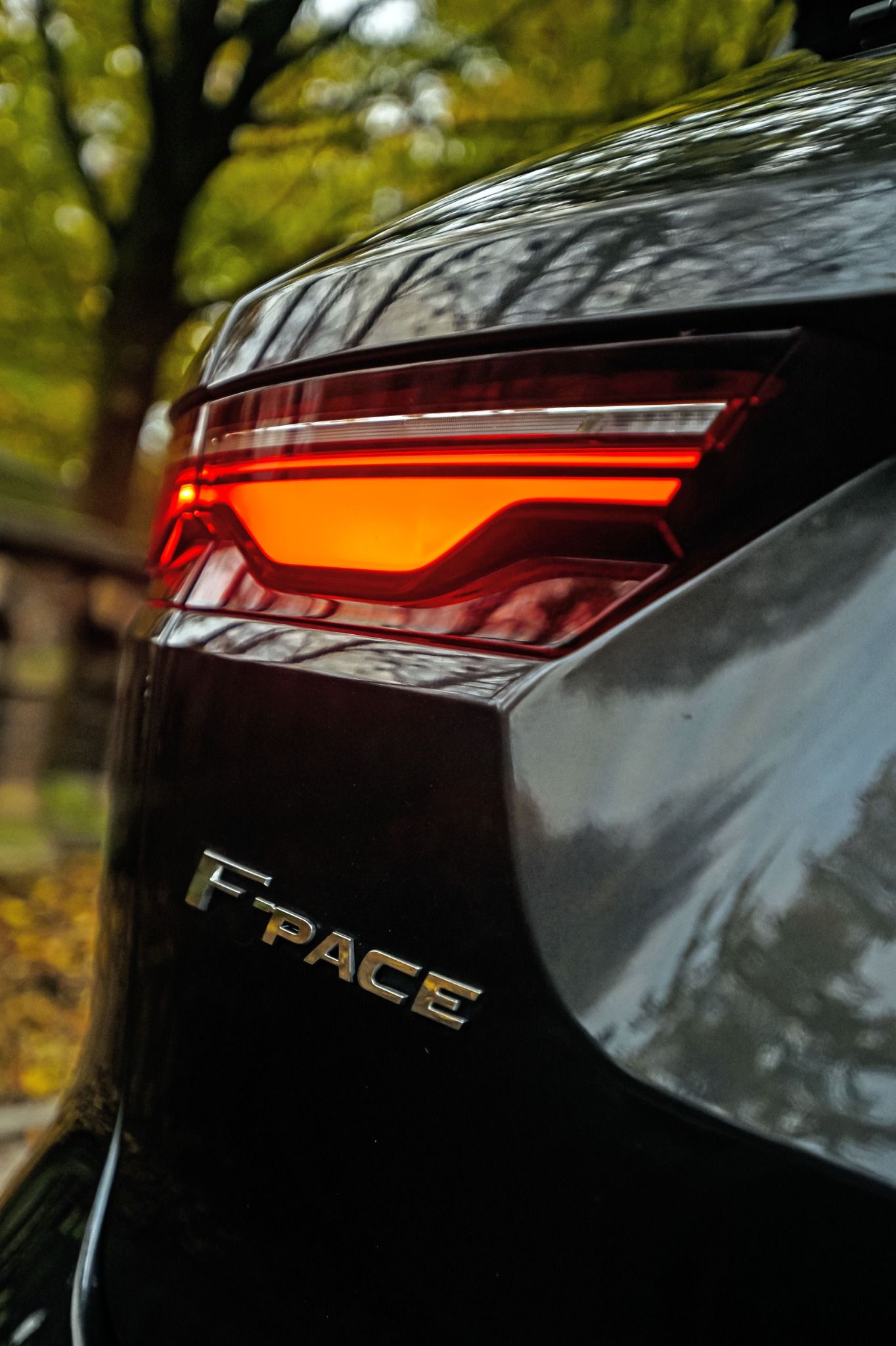 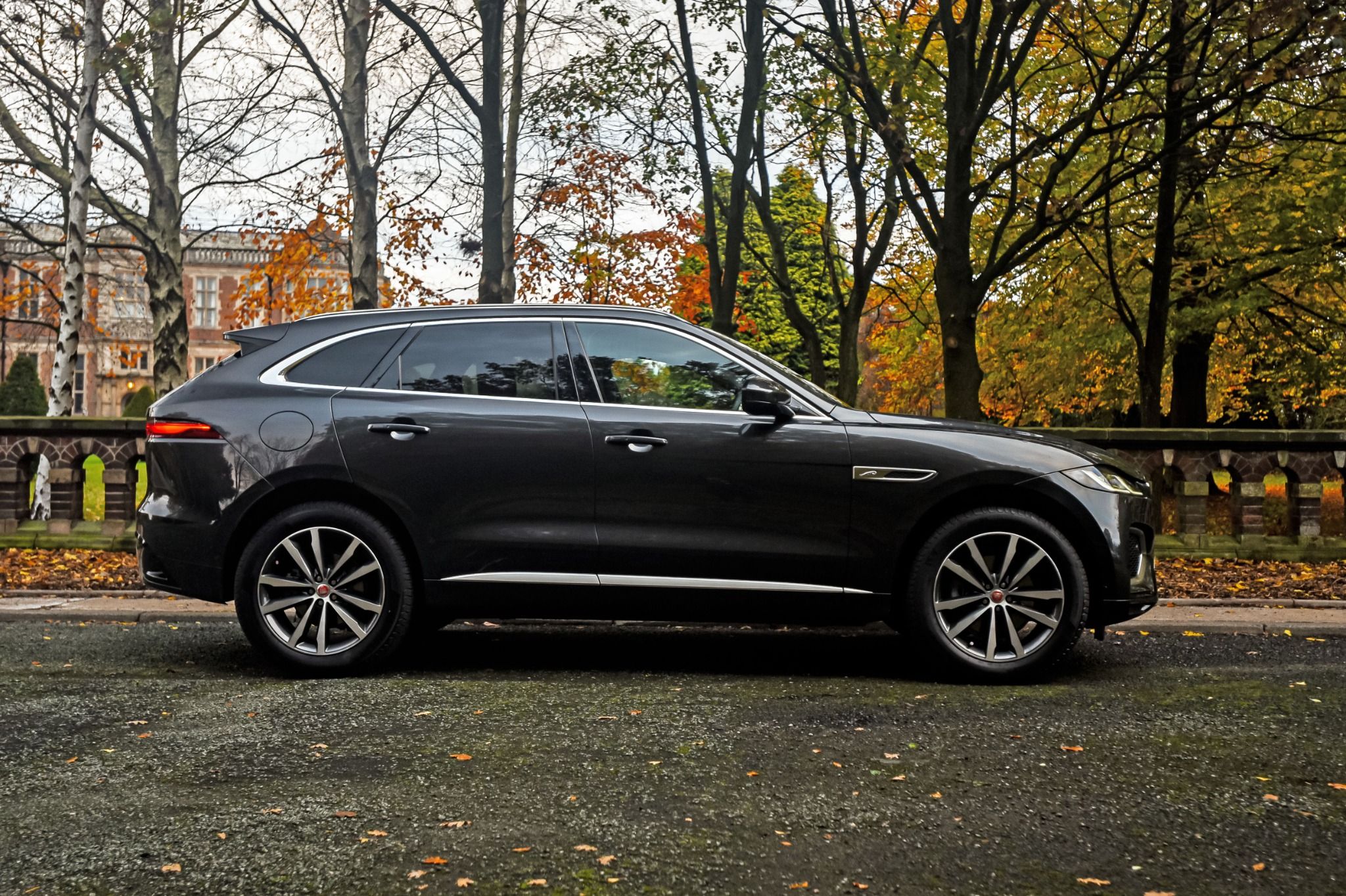 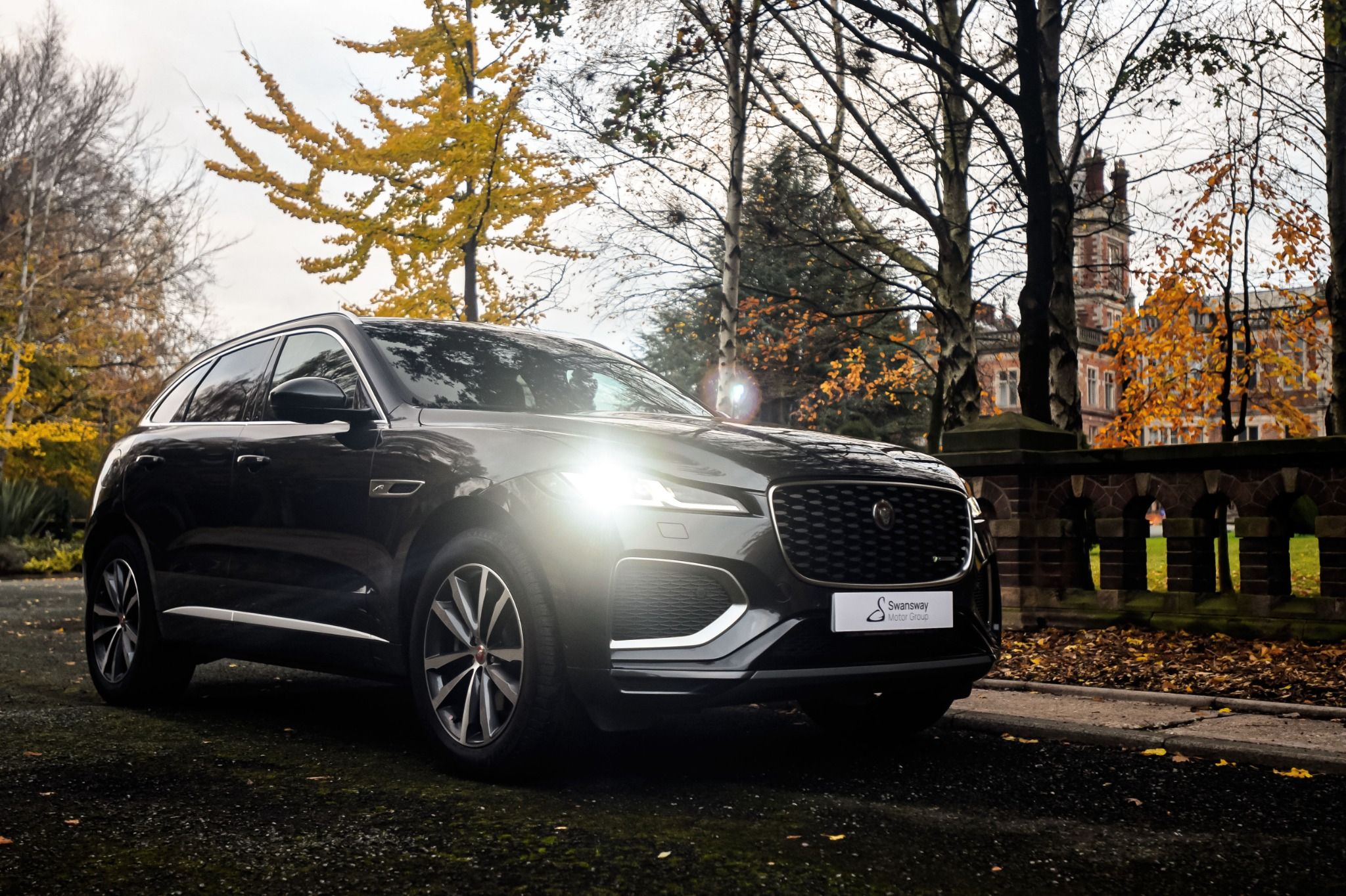 What trim levels are on the Jaguar F-Pace? 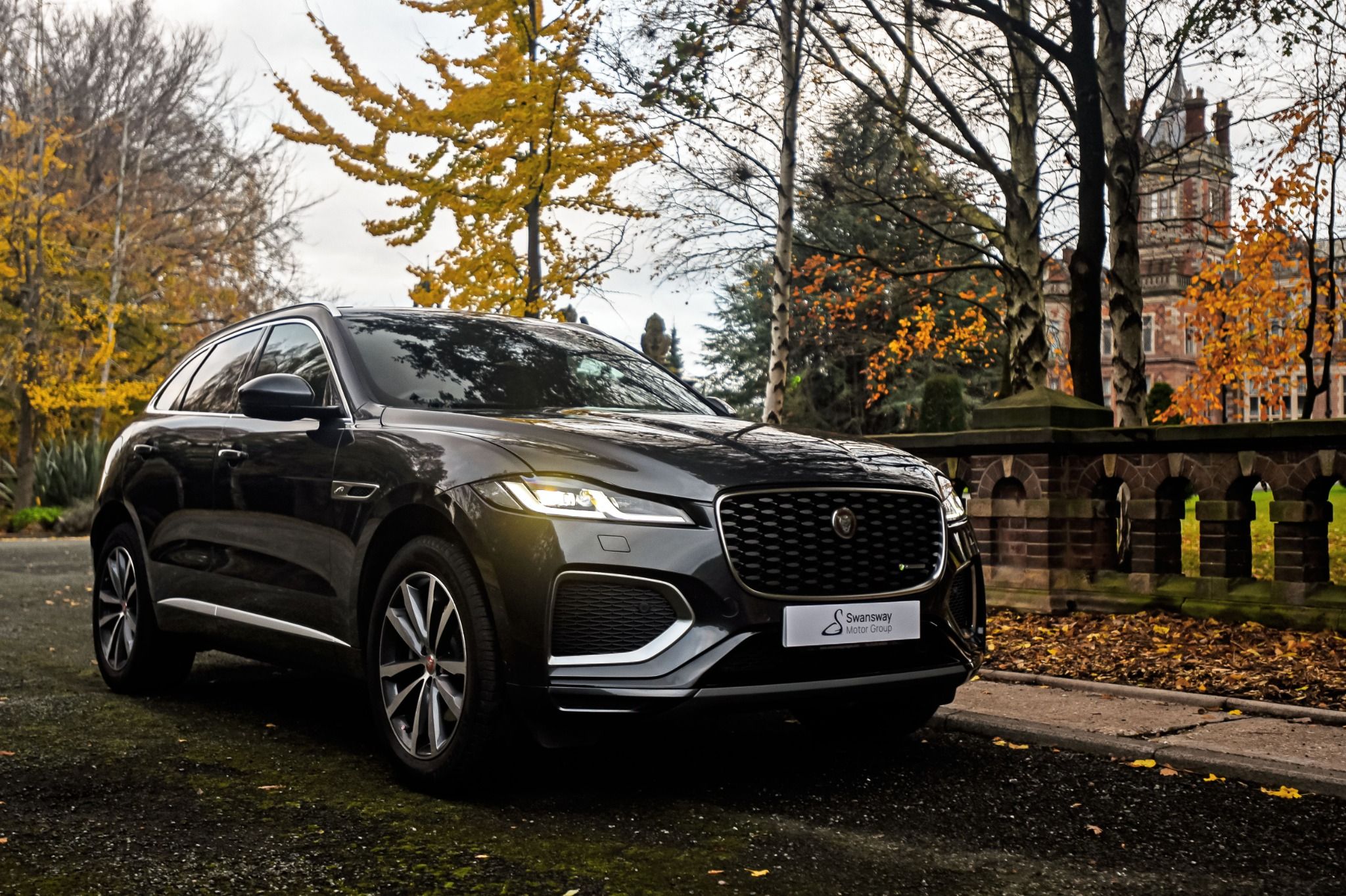 Jaguar Land Rover has a pretty formidable reputation when it comes to building off-roaders, so it’s fair to say that it wasn’t much of a surprise when Jaguar’s first SUV - the F-Pace - was excellent straight off the bat.

Jaguar Land Rover has a pretty formidable reputation when it comes to building off-roaders, so it’s fair to say that it wasn’t much of a surprise when Jaguar’s first SUV - the F-Pace - was excellent straight off the bat.

It’s an added bonus that it’s a great looking option too, but considering the SUV segment has swelled considerably in recent years, the F-Pace’s job isn’t as easy as it once was. That’s probably why Jaguar has given it a significant update - which is the car we’re looking at here.

Though the changes to the exterior are light, it’s in the cabin where the rulebook has been completely re-written. There’s more tech than before and a great focus on refinement - but we’ll look at that in more detail shortly.

A range of new engines has been included too, with mild-hybrid technology implemented for the first time. A plug-in hybrid has also been added to the range.

There’s also the option of diesel and petrol engines with either four or six cylinders, while the plug-in hybrid uses a 2.0-litre four-cylinder petrol engine linked with an electric motor and batteries. ​​

The original F-Pace impressed from the off with its excellent driving style, owing to its neat handling and plentiful levels of grip. However, it did suffer somewhat with body roll, which is something that has been addressed with this latest model.

As a result, the F-Pace now corners even more keenly than before, but thankfully not to the detriment of ride quality. It’s extremely comfortable during daily driving, in fact, while clever active road noise cancellation technology dials out road or engine noise from entering the cabin. It makes it a very relaxing place to be.

Jaguar appears to have followed an ‘if it ain’t broke, don’t fix it’ method with the F-Pace, leaving the athletic-looking SUV’s features largely unchanged in this latest model. It has been refined, though, with a new bonnet design and slim LED headlights with a new double-L signature.

A new grille and new rear lights complete the update, but these only add to an already good-looking package. 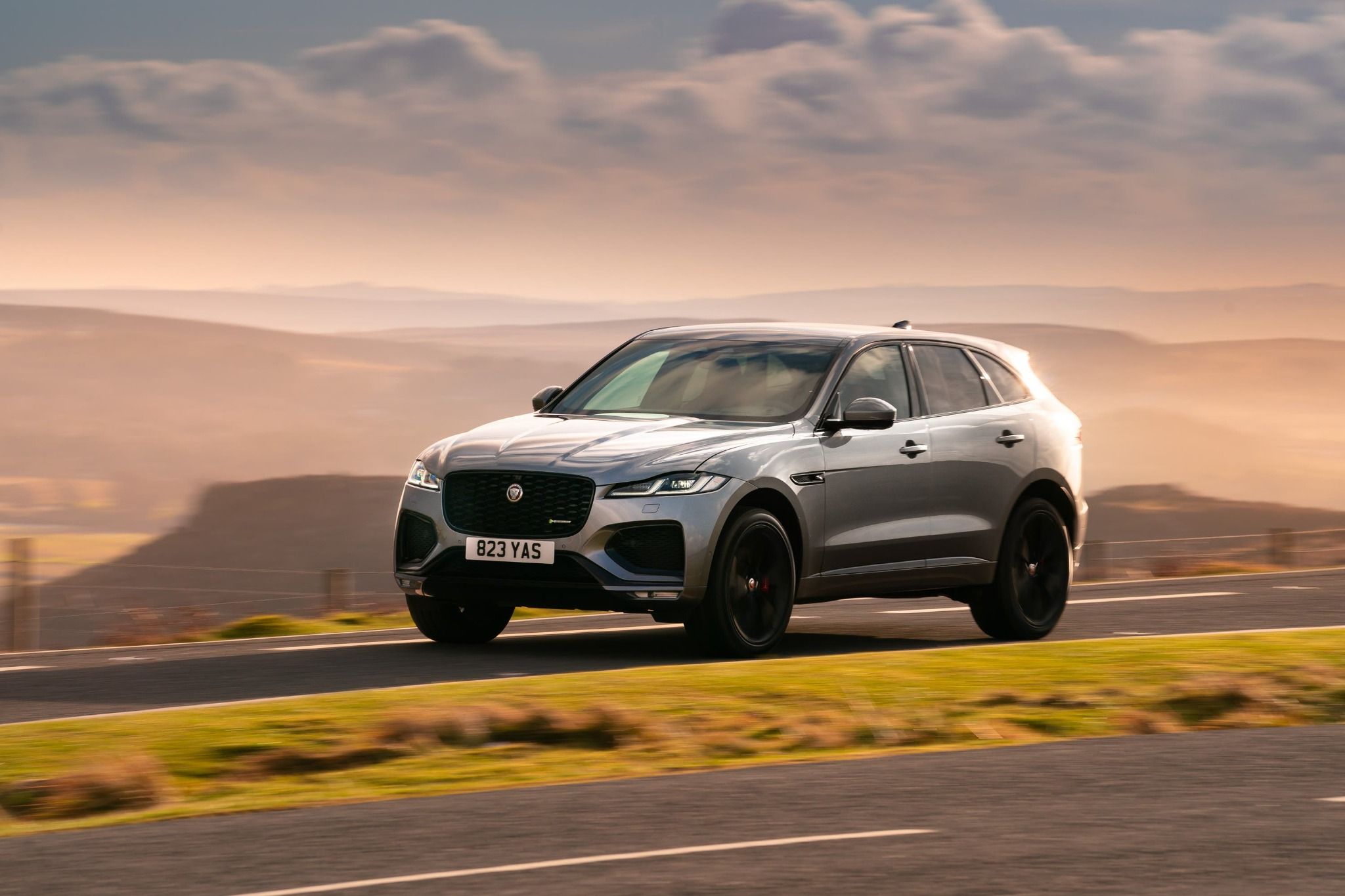 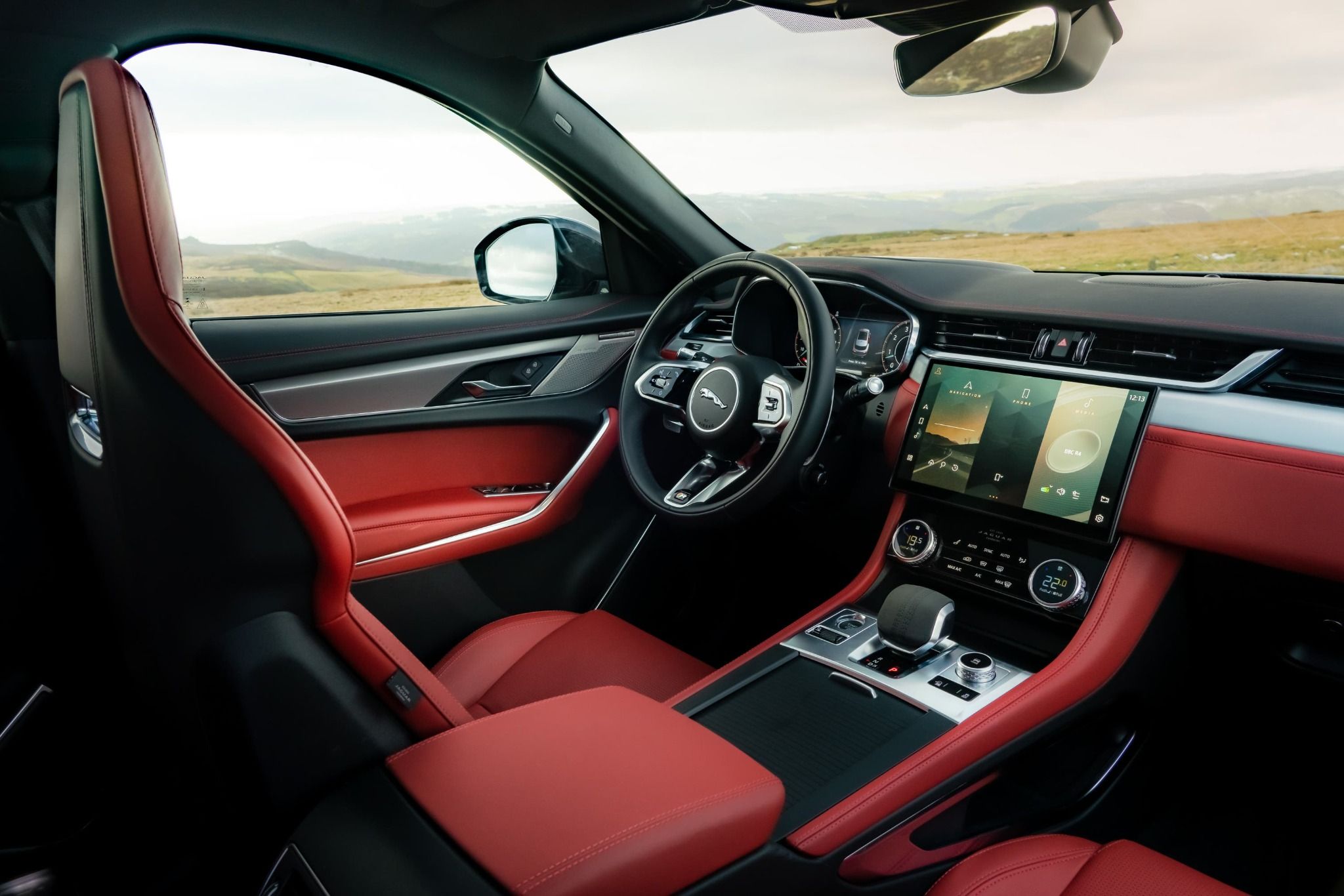 It’s in the cabin where things have taken a real upmarket turn. It’s an impressively high-quality interior now, boosted thanks to a new high-quality tablet-like infotainment screen which is impressively slick.

Our test car had red leather upholstery too, while the sports seats fitted provided a great deal of support.

The entry price for the F-Pace is £40,860 and even at this point, you get a high level of standard equipment including LED head- and tailights, a variety of heated elements and 19-inch alloy wheels. Climate control and the new infotainment system are included too.

Sporty-looking R-Dynamic models start at £42,960, while high-performance SVR versions hit the ground from £77,595 and bring a punchy V8 engine, an upgraded sound system and plenty of mechanical upgrades.

The SVR is only available with one specification pack, but standard F-Pace and R-Dynamic models can be added to with further trim levels, bringing features such as larger alloy wheels and more premium interior materials. ​​

Though the premium markets are largely dominated by German brands, Jaguar has come out fighting with its revamped F-Pace. Though it’s a car which has always punched above its weight, these major improvements mean that the gap between Jaguar and its competitors has been comprehensively closed.