The Audi TT Roadster combines the iconic silhouette of the TT Coupé with the pleasures of open-top driving. As brilliant to drive as its sibling, with the same road-focused cabin, it’s not hard to see why it’s one of the UK’s best-selling soft-tops.

The latest TT has sharpened its looks to emphasise the ever-more sporting handling characteristics. The Roadster boasts a practical and lightweight fabric roof that folds and disappears behind the driver in under 10 seconds. The roof comes in three colour options, each chosen by Audi to co-ordinate harmoniously with the many paint options available.

All TT Roadsters ride on stylish alloy wheels, with the S Line trim upgrading the 18-inch rims to 19-inchers. The S Line trim also adds a body styling package, and to complete the more aggressive look you can also have the ride height lowered by 10mm.

A cute rear spoiler on the tail deploys and retracts at a set speed or manually at the touch of a button, while bright Xenon headlights and LED daytime running lights illuminate the road ahead. 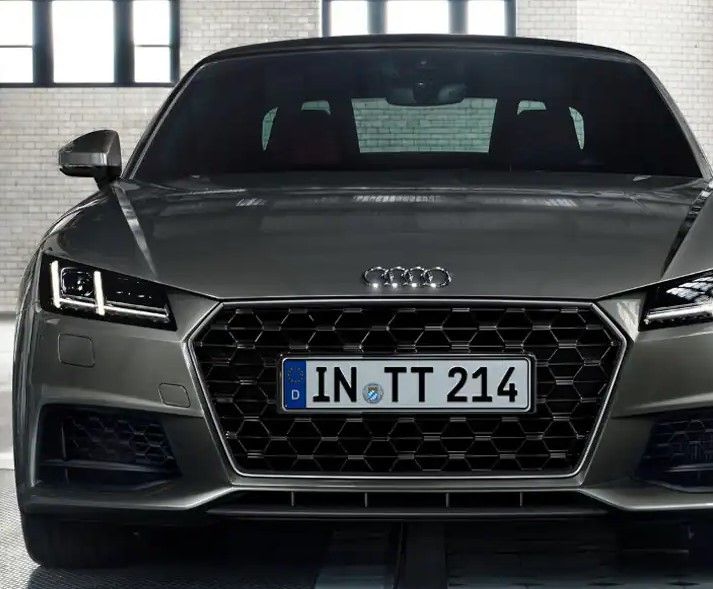 No doubt about it, the TT Roadster’s interior has the wow factor. It’s exquisitely well-built from premium materials throughout, with a minimalist design which emphasises that the focus is on driving. Both trim levels feature a sporty flat-bottomed steering wheel that you can adjust to find the perfect driving position, air conditioning and Alcantara/leather upholstery on the front seats.

There’s a conveniently-shaped boot with ample space for shopping trips or a couple of weekend bags. An optional wind deflector can be specified to reduce draughts in the interior, so you’ll look as poised on arrival at your destination as you did when you set out of the door. You can even have a microphone added to the driver’s seatbelt so you can still be heard while taking hands-free calls with the roof down.

The TT Roadster features the impressive Audi Virtual Cockpit, which replaces the traditional analogue dials with a giant 12.3-inch TFT screen that displays everything from speed and revs to phone and audio information.

Audi’s MMI radio system is fitted as standard and can be controlled with both a rotary dial and touch-sensitive pad. It’s ready to be paired with your Bluetooth®-enabled smartphone so you can stream music from the internet and create a perfect soundtrack. Satellite navigation can also be specified as an option as part of the Technology pack, offering detailed three-dimensional directions via the Virtual Cockpit.

The TT Roadster comes with many safety features as standard, including front impact airbags, Cruise Control and a tyre pressure loss indicator to let you know if you have a slow puncture.​

The full engine line-up from the TT Coupé has been carried across to the Roadster, meaning you can choose from three four-cylinder units. If you prefer petrol, there are turbocharged 1.8 and 2.0 TFSI engines with 178bhp and 227bhp respectively. The 1.8 will sprint to 60mph in under 7.2 seconds, while the 2.0-litre is around a second faster.

The 2.0 TDI ‘Ultra’ diesel option is fractionally (and we mean fractionally) slower away from the lights, but muscular mid-range torque means in-gear acceleration makes overtaking easy. Extremely impressive 121g/km CO2 emissions will appeal if you’re buying a company car, especially once you hear it can achieve over 60mpg.

An optional six-speed S tronic gearbox is available in the 2.0 TFSI, which can also be combined with Audi’s legendary quattro all-wheel drive system to improve grip and handling even further.

Audi drive select means you can alter the driving manners of the TT Roadster to suit the occasion, subtly changing the throttle and steering responses. Comfort mode will make longer drives less tiring and Dynamic mode tightens up the handling to make the most of twisting roads. What trim levels are on the Audi TT Roadster?

We test out the Audi TT Roadster, lets see what it has to offer.

The TT has been mainstay of the Audi range for some time now, delivering rock-solid German build quality in a good-looking and compact package. It’s recently been refreshed, updating its looks both inside and out, and refining the way it drives.

It’s still available with a range of petrol engines (though now with more power on offer than before), and it can be specified as either a hard-top Coupe or, like we have here, the soft-top Roadster version.

This is a subtle refresh of the third-generation TT Roadster we first saw on our roads back in 2014. However, some key changes have been made throughout the car; the interior has been given new seats, while the exterior gets a variety of new design touches to help it remain fresh.

The cabin still benefits from Audi’s Virtual Cockpit infotainment system (the TT was the first production model to feature this tech when it was first released), but it doesn’t feel outdated – in fact, it continues to add to the overall appeal of the car.

One of the biggest changes to the TT Roadster was the removal of a 1.8-litre engine on base cars in favour of a larger, more powerful 2.0-litre four-cylinder unit. Entry-level ‘40’ cars produce 192bhp, while ‘45’ versions like we have here push out 242bhp. Opt for the range-topping TT S version and you’ll find 302bhp under the bonnet.

Here, power is sent to all four wheels via a seven-speed dual-clutch automatic gearbox. A manual is available, albeit only on the lower-powered TT models. Getting from 0-60mph takes 5.3 seconds, and flat-out the TT will do 155mph. Efficiency-wise, Audi claims that the TT 45 will return up to 34.4mpg combined and emit 164g/km CO2. All cars in the TT range now get a particulate filter, too.

The TT has historically returned a brisk, if not overtly rewarding, driving experience – and it’s the same story with this latest one. The engine provides plenty of shove, and the seven-speed gearbox shifts smoothly when in full auto and accurately after being switched to manual mode too – it can be a touch dim-witted when moving away from a dead stop, however.

There’s plenty of accuracy to the steering, and though the ride on the 19-inch alloy wheels is quite sharp, it means there’s little in the way of body roll. Plus, thanks to the quattro all-wheel-drive system, the TT remains unflappable in the wet, and stable and composed in the dry. It may not be the most involving of experiences, but it’s assured and predictable at all times.

The TT remains a looker. Sharp lines and a compact, almost square layout mean that it fits well on UK roads, while the twin pipes at the rear and electric rear spoiler do give it a little added drama. S-Line models like our test car are helped even further thanks to the inclusion of a rear diffuser and a full-length front splitter.

The Roadster version even looks good with the roof raised — an area which can sometimes detract from the overall look of soft-top cars. Speaking of the roof, it can be raised or lowered in around 10 seconds, at speeds of up to 31mph. Once closed, it does a decent job of isolating road noise – though, of course, it isn’t a refined as the hardtop. 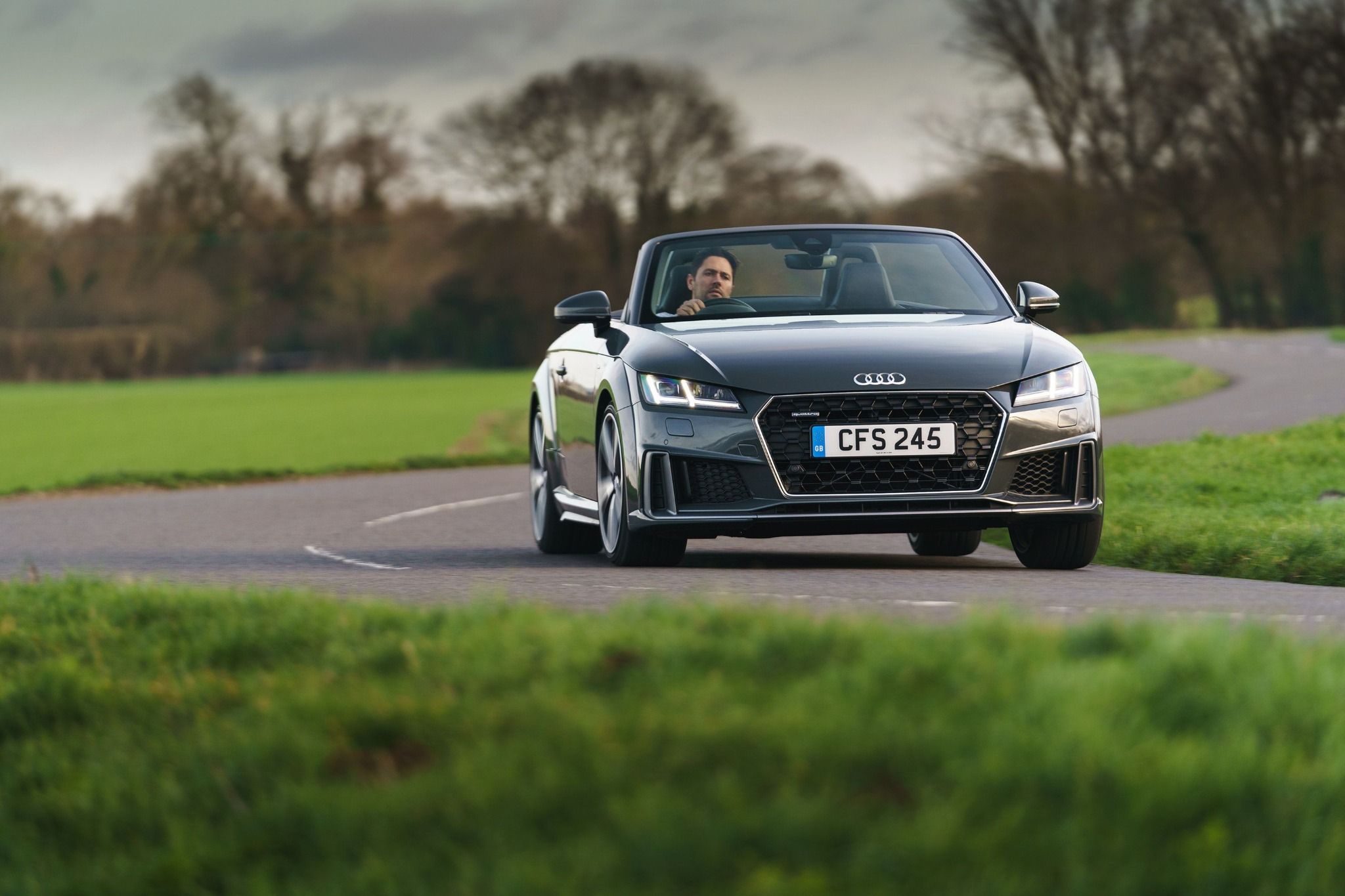 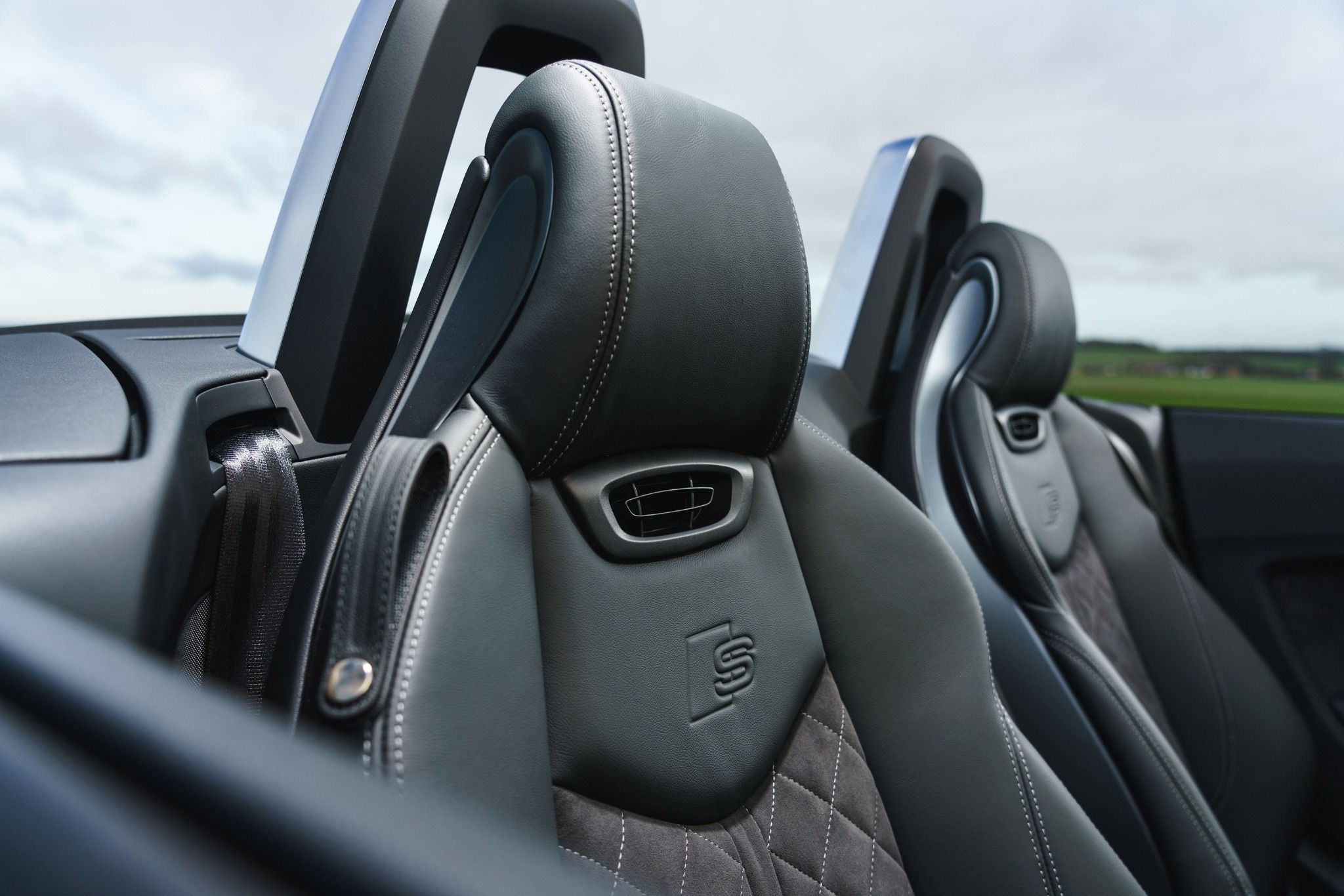 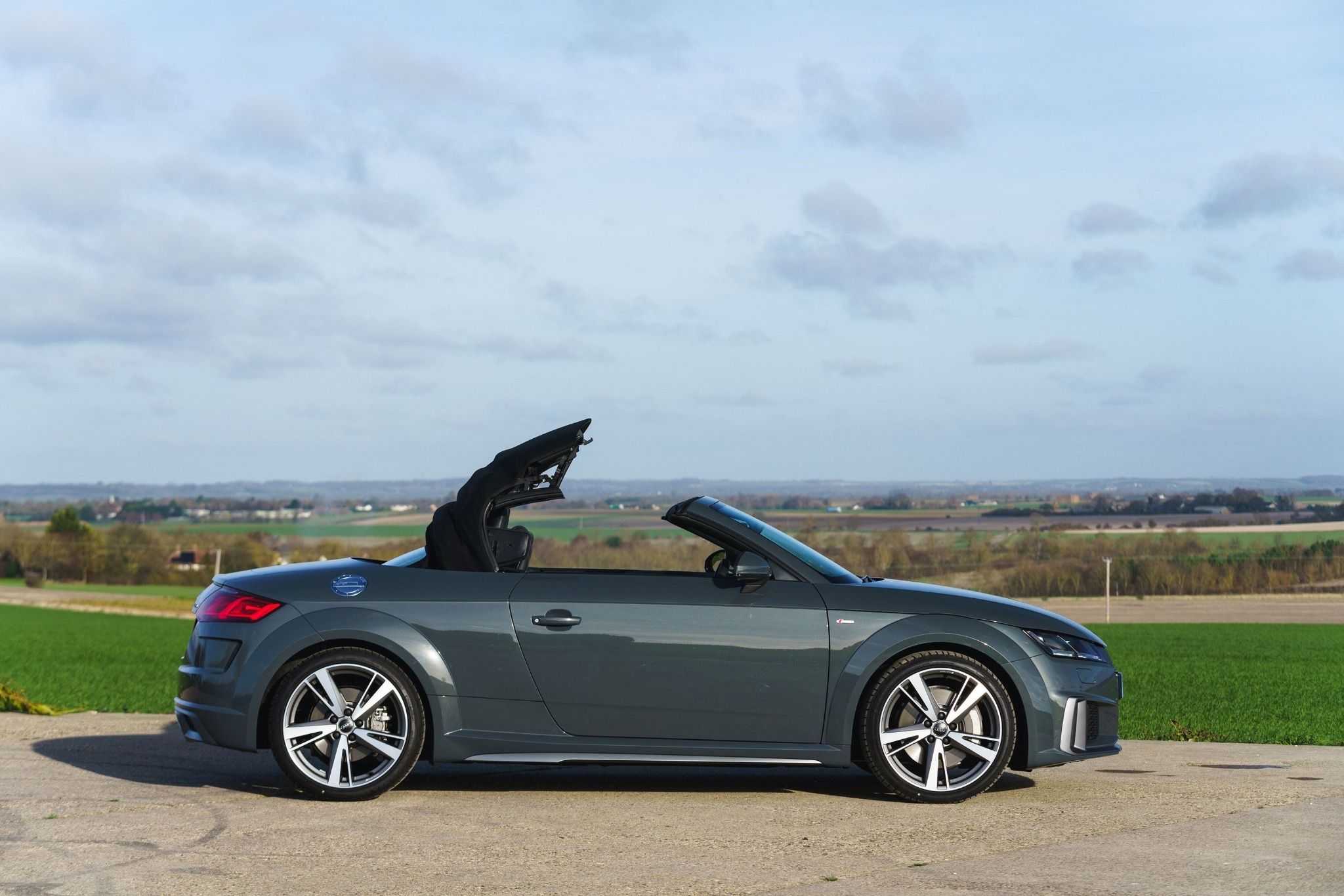 The cabin of the TT is largely focused around the driver; all of the main displays are located where the traditional dials would be as part of the car’s Virtual Cockpit system. It does mean that the interior of the Audi feels a little bit sparse, but you can’t fault the quality of it. The buttons which do remain have a solid, tactile feel to them and the aluminium-fringed air vents are classy both in terms of looks and operation.

The sports seats are heated (a handy feature for when the roof is down) and our test car came with heated blowers just below the headrests – again, a welcome touch on cooler days when you want to recline the roof.

Audi has beefed-up the amount of standard equipment available on base models, with features such as cruise control and Xenon headlights now included on entry-level Sport-spec cars. However, our S-Line test car benefitted from additions such as 19-inch forged alloy wheels, full LED headlights and ‘Super’ sport seats fitted as standard.

S-Line cars also get a full exterior styling pack, which is ideal for those looking to give their TT a little more presence out on the road. Virtual Cockpit is fitted as standard too – though our car came with the Technology Pack, a £1,495 optional extra which adds full navigation and online mapping, as well as an eight loudspeaker system. A wireless phone charging system is also added as part of the pack.

The Audi TT remains a reliable, well-made and reasonably punchy sports car. it may not be able to offer the same driver involvement as rivals, but that’s not to say it’s devoid of fun – it just doesn’t come alive in the way cars like the Porsche Cayman do. This Roadster version certainly broadens its appeal, and with so many soft-tops snapped up each year in the UK, we can imagine this latest, refreshed TT experiencing a fair amount of popularity.